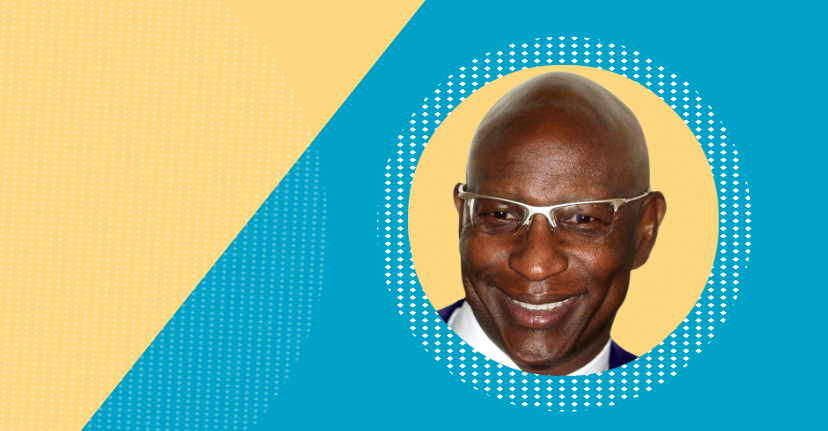 When the Los Angeles Rams take the field in SoFi Stadium, they’re playing in the shadow of perhaps the franchise’s greatest superstar: Eric Dickerson. Playing as a running back, Dickerson joined the Rams for several years in the 1980s. And, in 1984, he broke the NFL’s single-season rushing record with 2,105 yards gained on the ground.

Dickerson left the Rams to play for the Colts, Raiders, and Falcons in the back half of his 11-year career—eventually seeing his Rams jersey hung up in the NFL Hall of Fame in Canton, Ohio. Since leaving the NFL, Dickerson has worked as an analyst and radio host. He joined SoFi’s Brian Walsh to discuss what he learned in his football career — and after:

“I had drive, I wanted to be the best,” Dickerson said, pointing to a saying he had learned from his father: “things done by half are never done right.” Dickerson said that he believes this attitude of discipline carried him through his football career — spanning high school in Texas, college at Southern Methodist University, and his decade-plus stint in the NFL.

It’s a mantra he said he’s applied to the endeavors he tackled after retiring from professional football.
“You always want to be the best,” he said.”

While Dickerson says he always felt incredibly driven, it did not mean that football was his only love (or even the sport he most wanted to play). Dickerson also played baseball. When he started playing football in high school, he even briefly quit his team because of racist treatment from his coach towards him and other Black players.

He and teammates came back to the team, when another coach came to his house to ask him if he had goals for his life after high school. “You should play sports, that could be your way out,” he recalls the coach saying to him. “It’s funny how grownups see things differently from kids,” Dickerson said.

According to Dickerson, his mother backed him up: “I don’t like you quitting, I don’t like football, but I don’t like quitting,” he remembers her saying. Dickerson went back to the team. And, he said that—while it wasn’t always pleasant playing for that coach—they went on to win a state championship.

While Dickerson was encouraged by others to pursue college football while he was in high school (and then the pros while he was in college), he said that he was driven by both his inner desire to be the best and wanting to do well by his family. “I always wanted something nice for my Mom,” Dickerson told Brian Walsh. “I always wanted a nice house because we were poor. That was my ambition. That was my drive.”

The life lessons Dickerson distilled during his sports career are something that, he said, might be applied to other personal and professional endeavors: “If you believe in something, you have to go for it.”

With his first paycheck, Dickerson said, he bought that house for his mom. Only later did he get the Cadillac and a mink coat. “I don’t know why I bought that mink coat. I wore it a couple of times.”

Dickerson said that he tried to transfer his motivation —his fire to succeed— from the field to his post-football endeavors. “Whatever I did, I wanted to be the best at,” he said, “[from the] business world to life after football, you always want to be the best.”

Whie Dickerson’s time in the NFL was long compared to the few years that other players got to play in professional leagues, it still totaled just over a decade. Dickerson said that he learned that, even for superstars with the chance to sign several contracts, certain opportunities can go by in a flash.

Dickerson said that, when he now speaks to NFL players, he tries to impress on them just how quickly those first few years can fly by—including in his talks with Falcons running back Todd Gurley and Detroit Lions rusher Adrian Peterson. “I’m going to tell you what to look out for: Father Time,” Dickerson said he told these superstars. “You’re going to look up and be in your fifth or sixth year and wonder where the time went.”

While not everyone can be a star running back or a professional athlete of any kind, the sense of gratitude Dickerson has cultivated can be appreciated by many people: “Make the best of the situation you have, it’s such a blessing to play something you dreamed of as a kid, you get the chance to play something you love.”

Dickerson explained that, in his experience, many football players typically get three to five years in the NFL: “Most of these guys don’t play long.”

This short career window can have earning implications for some. “You’re lucky enough to get one million a year and play for four years,” Dickerson noted. He went on to say that a million-dollar figure may seem like a lot of money in the moment, but when a player’s time in the league ends, that big paycheck can also stop. “Hitting the wall—what you got is what you got left.”

Understanding What You Know

While the financial challenges of being an NFL player are unique — big paychecks at a young age, but maybe only a few of them — there are still some life lessons that can be applied for other situations. “You got to get into stuff you know about,” Dickerson said.

He imparted the importance of understanding what goes into your paycheck — and what, generally, gets taken out. Dickerson said he was shocked at what was subtracted from his first pro-league paychecks.

On top of typical deductions, he also said that he had to figure out how to pay for extra expenses like children, housing, lawyers, and the legions of people wanting a piece of his earnings. “All these people watching your money want their cut,” he said. “A lot of your so-called friends don’t have your best interests at heart.”

He said that many athletes struggle with their high pay, especially those that come from less advantaged backgrounds.
“It’s hard at times to say no,” Dickerson explained, saying it was important to “get the right people in front of you.”

“I think the big thing is… not knowing, not having knowledge, not getting the right people in place,” Dickerson said.

“Football money is hard earned money. It’s hard to earn it. You earn every dime.”

Start Planning for the Future

Learn more about saving and spending with SoFi Checking and Savings.
Learn More

Third-Party Brand Mentions: No brands or products mentioned are affiliated with SoFi, nor do they endorse or sponsor this article. Third-party trademarks referenced herein are property of their respective owners.
SoFi Checking and Savings
SoFi Money is a cash management account, which is a brokerage product, offered by SoFi Securities LLC, member FINRA / SIPC .
SoFi Bank Debit Card issued by The Bancorp Bank.
SoFi has partnered with Allpoint to provide consumers with ATM access at any of the 55,000+ ATMs within the Allpoint network. Consumers will not be charged a fee when using an in-network ATM, however, third party fees incurred when using out-of-network ATMs are not subject to reimbursement. SoFi’s ATM policies are subject to change at our discretion at any time.
The SoFi Checking and Savings Annual Percentage Yield as of 2/24/2022 is 0.00% APY (0.20% interest rate). Interest rates are variable subject to change at our discretion, at any time. No minimum balance required. SoFi doesn’t charge any ATM fees at any Allpoint® location. SoFi reserves the right to limit or change ATM policy at any time without notice.
Non affiliation: SoFi isn’t affiliated with any of the companies highlighted in this article.
SOMN20156