The February Empire State Manufacturing Index is released today, which is a metric based on a survey of about 200 manufacturing executives in New York State. In January 27% of those surveyed said conditions had improved, while 23% said conditions were worse than the previous month.

Tomorrow will be an important day for economic data with the release of the January Producer Price Index, January industrial productions, January capacity utilization, December business inventories, and the February National Association of Home Builders Index. January retail sales will also be released. Retail sales dropped in December as a result of more stringent restrictions on restaurants and shopping centers. FOMC meeting minutes will also be released tomorrow and investors will be parsing through them for clues about the committee’s stance on monetary policy and upcoming decisions that could impact interest rates.

On Thursday January housing starts, January building permits, the January Import Price Index, and the February Philadelphia Fed Manufacturing Index will be released. Initial jobless claims will also be reported. During the week ending February 6, 793,000 Americans filed new unemployment claims. Though this is still above pre-pandemic jobless levels, it was the lowest figure seen in five weeks.

Today Palantir Technologies (PLTR), a company which builds software for businesses dealing with complex and sensitive data, will report its earnings. The company was private for 17 years before it went public through a direct listing in September 2020. Since then its shares have been volatile, but they are up 52% so far this year.

Tomorrow Shopify (SHOP) hands in its report card. The ecommerce platform has seen substantial growth during the pandemic. Last week it announced that it will partner with Facebook (FB) to give merchants on Instagram and Facebook access to Shop Pay, its payments tool.

On Thursday, Walmart (WMT) will share its latest results. This week the retail giant will begin administering COVID-19 vaccines at more than 1,000 Walmart and Sam’s Club pharmacies in 22 states. According to the company, 90% of Americans live within 10 miles of a Walmart, so it will be able to distribute vaccines to people in communities who might not be close to healthcare facilities.

Lastly, on Friday Deere & Co (DE) reports earnings. Prices for corn, soybeans, and other commodities have been surging in recent weeks as a result of dry weather and strong demand from China. This may cause Farmers to invest in new machinery from John Deere.

Check out this week’s upcoming events, and be sure to reserve your seat in the SoFi app! 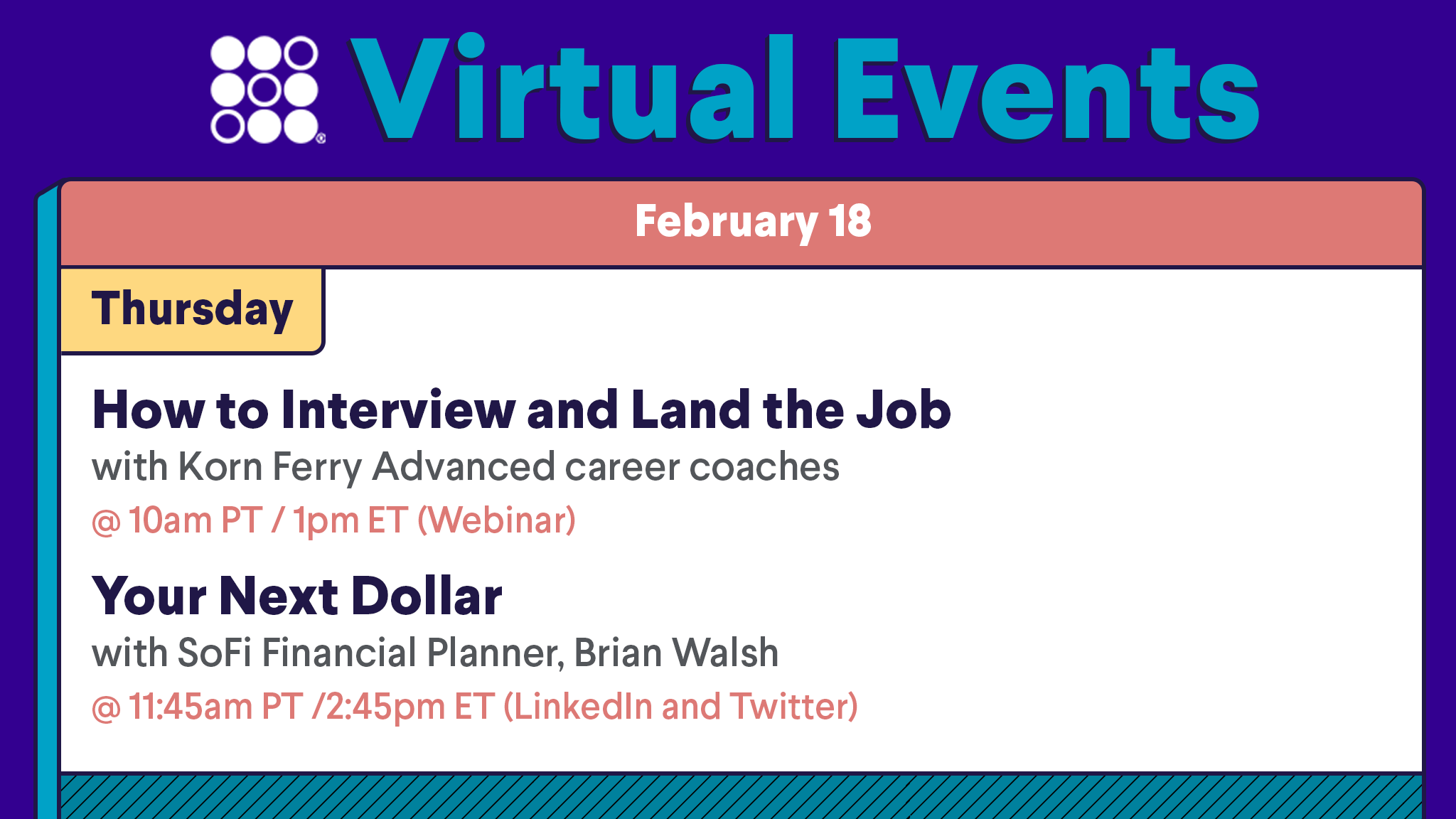 Please understand that this information provided is general in nature and shouldn’t be construed as a recommendation or solicitation of any products offered by SoFi’s affiliates and subsidiaries. In addition, this information is by no means meant to provide investment or financial advice, nor is it intended to serve as the basis for any investment decision or recommendation to buy or sell any asset. Keep in mind that investing involves risk, and past performance of an asset never guarantees future results or returns. It’s important for investors to consider their specific financial needs, goals, and risk profile before making an investment decision.
The information and analysis provided through hyperlinks to third party websites, while believed to be accurate, cannot be guaranteed by SoFi. These links are provided for informational purposes and should not be viewed as an endorsement. No brands or products mentioned are affiliated with SoFi, nor do they endorse or sponsor this content.
Communication of SoFi Wealth LLC an SEC Registered Investment Advisor
SoFi isn’t recommending and is not affiliated with the brands or companies displayed. Brands displayed neither endorse or sponsor this article. Third party trademarks and service marks referenced are property of their respective owners.
SOSS21021601