The October NAHB home builders’ index is due this morning. In September, builder confidence jumped 5 points to 83, posting its highest reading in the survey’s 35-year history. Demand for housing has surged due to COVID-19, but developers are having a hard time finding finished lots and labor. They also have to contend with the rising cost of lumber, which has caught some builders off-guard. Since mid-April lumber prices have spiked 170%. According to the NAHB, this has added more than $16,000 to the price of a new single family home.

Tomorrow, September housing starts and building permits are published. In August, housing starts fell 5.1%, pulled down by a 22.7% drop in the multi-family sector. New activity jumped in the West and Midwest but slid in the South and Northeast.

On Wednesday, the Fed’s Beige Book is released in the afternoon. This report is published eight times per year, highlighting economic conditions across the various districts. Investors parse through it to glean additional color about the state of the US economy.

September’s leading economic indicators index is published on Thursday along with existing home sales. The weekly initial jobless claims report will also be released. In the week ending October 10th, another 898,000 Americans filed for first time unemployment benefits, which was much higher than analyst expectations of 830,000. In fact, this is the highest level of initial claims since the week of August 22.

Flash readings of October manufacturing and service data are due on Friday. In September, the IHS Markit composite PMI index dipped to 54.4 from 56.6 in August. The services PMI slipped to 54.6 from 55 the month prior. Any reading above 50, however, represents economic expansion.

International Business Machines Corp (IBM) reports its latest results today. The 109-year-old company just made waves with the announcement that it is spinning-off its IT infrastructure services unit into a separately traded public company. The blue-chip company wants to focus on its cloud-computing and artificial intelligence business units instead. Investors will be looking for more details surrounding this strategic decision.

Netflix Inc. (NFLX) is scheduled to report earnings tomorrow. Last week, Goldman Sachs (GS) raised its price target on Netflix to a new Street high of $670 per share. Analyst Heath Terry says the company will report results well above guidance and consensus expectations due to more people spending time at home. Investors focus on subscriber growth when it comes to Netflix, and Terry is projecting that the streaming giant will add around six million net subscribers.

Tesla Inc. (TSLA) hands in its latest report card on Wednesday. The electric vehicle maker, led by its high-profile CEO, Elon Musk, is always closely watched by investors. Tesla is now the world’s most valuable automaker and its stock has surged over 430% this year. Goldman Sachs analyst Mark Delaney said improving vehicle demand will benefit the carmaker, raising his price target on the stock from $400 per share to $450 per share. However, Tesla bears like GLJ analyst Gordon Johnson aren’t so sure. He thinks the company will miss consensus estimates due to foreign exchange headwinds and lower regulatory credit sales.

Coca-Cola Co. (KO) reports earnings on Thursday. The beverage giant, like others, saw sales suffer from stay-at-home orders earlier in the year. However, as lockdown measures eased and people started venturing further from home during the summer, they believe a sales uptick might be in the works. The company is also continuing to slim down its product line and recently announced plans to discontinue Zico, its coconut water brand. Other “zombie brands” at risk include Diet Coke Feisty Cherry, Coke Life, Northern Neck Ginger Ale, and Delaware Punch. Eventually, Coca-Cola will shrink its brand ownership by more than 50% to focus on its most popular products.

On Friday, the week wraps up with an earnings announcement from American Express Co. (AXP). Some analysts think more movement this past summer could help the credit card giant. Others, however, think American Express has an uphill battle because it is “over-indexed” to travel, according to Bank of America’s Mihir Bhatia. “We believe travel spend needs to recover for billing momentum to resume and shares to outperform,” Bhatia wrote. “We suspect travel will be among the last categories to recover to pre-COVID levels and the slower than expected recovery in billings could weigh on AXP shares.”

Are you ready to make one last push on your career and finance goals before the end of 2020? This week’s events lineup will help you take those next steps toward financial independence. Register in the SoFi app! 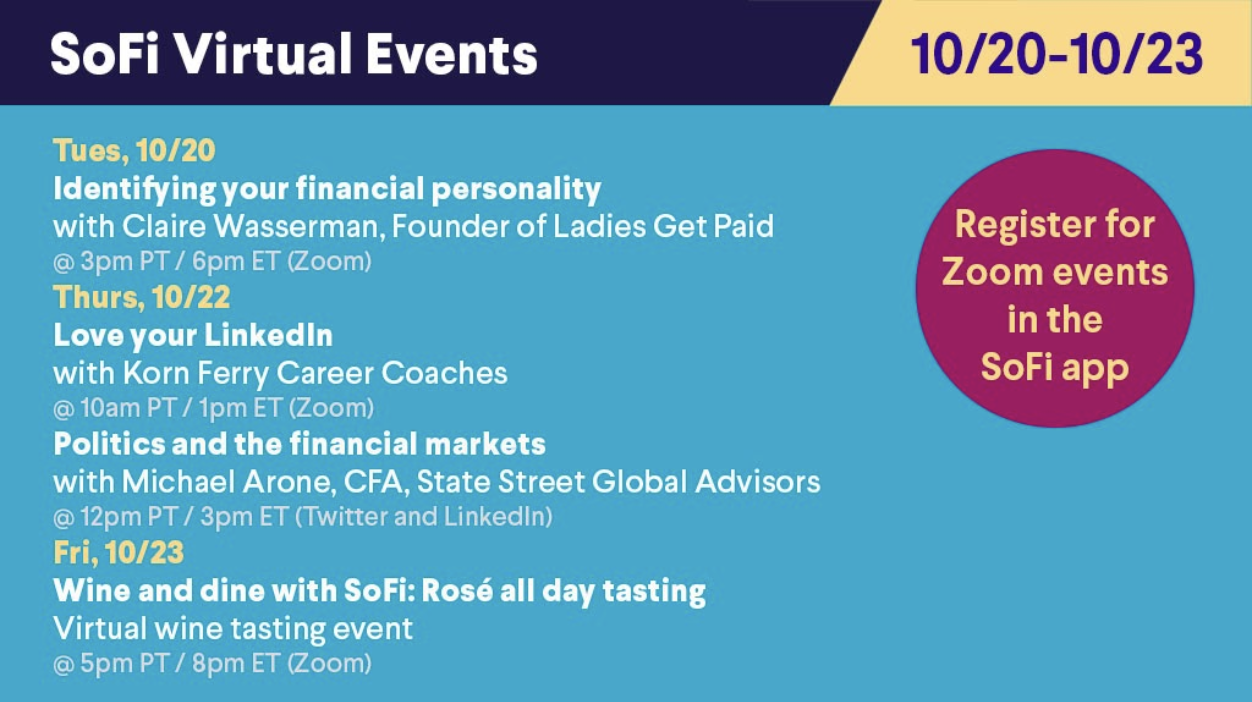 Please understand that this information provided is general in nature and shouldn’t be construed as a recommendation or solicitation of any products offered by SoFi’s affiliates and subsidiaries. In addition, this information is by no means meant to provide investment or financial advice, nor is it intended to serve as the basis for any investment decision or recommendation to buy or sell any asset. Keep in mind that investing involves risk, and past performance of an asset never guarantees future results or returns. It’s important for investors to consider their specific financial needs, goals, and risk profile before making an investment decision.
The information and analysis provided through hyperlinks to third party websites, while believed to be accurate, cannot be guaranteed by SoFi. These links are provided for informational purposes and should not be viewed as an endorsement. No brands or products mentioned are affiliated with SoFi, nor do they endorse or sponsor this content.
Communication of SoFi Wealth LLC an SEC Registered Investment Advisor
SoFi isn’t recommending and is not affiliated with the brands or companies displayed. Brands displayed neither endorse or sponsor this article. Third party trademarks and service marks referenced are property of their respective owners.
SOSS101901