There are no economic reports scheduled for today. However, the September NFIB small-business index and consumer price index are due tomorrow morning. The consumer price index, or CPI, is a gauge designed to keep track of the average prices of a basket of goods and services. Medical care, food, and transportation are some examples. CPI is the most watched measure of inflation, therefore government officials and central bankers like Fed Chair Jerome Powell will be closely following the report.

On Wednesday, the producer price index for September is released. Similar to its consumer counterpart, the producer variation tracks price changes from the perspective of industries that manufacture products.

On Thursday, October’s Philly Fed Index and Empire State Index are due. The September import price index will also be published. The most watched pair of statistics, however, will be the weekly initial jobless claims and continuing claims reports. Last week, another 840,000 Americans filed for unemployment benefits. This figure was worse than economist expectations of 825,000 jobless claims. Although this figure has been above 800,000 every week since mid-March, investors took solace in the improving continuing claims figure last week. This stat measures those who have already filed an initial claims report, and last week it fell by just over 1 million to 10.98 million. Regardless, both measures highlight the long road ahead for the labor market.

Finally, on Friday, investors will be watching September retail sales figures. It’s been a tough year for the retail sector given store closures and lockdown measures. However, businesses that are digitizing their sales efforts have been able to adapt to the “new normal.” In August, retail sales rose 0.6%, which was viewed as a step in the right direction. But this was below economist expectations of 1% growth, and below July’s reading of 0.9%. Some analysts believe this had to do with the expiration of enhanced unemployment benefits in July.

Third quarter earnings season steps into high-gear this week. Some of the biggest companies in the United States and the world will highlight their performance over the past three months. Tomorrow is jam-packed with reports from Johnson & Johnson (JNJ), Citigroup (C), BlackRock (BLK), First Republic Bank (FRC), JPMorgan Chase & Co (JPM), and Delta Air Lines (DAL). Last week President Donald Trump said he would delay stimulus talks until after the election, but then added he would be in favor of standalone fiscal measures to support aspects of the American economy like the airline industry. Investors will be curious to see what Delta says about forward guidance in light of the turbulent stretch they’ve endured. Analysts will compare these remarks with those from United Airlines (UAL), which reports on Thursday.

In addition to JPMorgan Chase & Co. and Citigroup’s reports on Tuesday, a handful of banks will hand in their report cards on Wednesday. Bank of America Corp (BAC), Wells Fargo & Co (WFC), and Goldman Sachs Group Inc (GS) are some of the big names to watch. US Bancorp (USB) and PNC Financial Services Group Inc (PNC) also provide updates. Historically low rates have made it harder for banks to generate earnings since it narrows the spread they can earn on certain loan products. These are giant firms, however, that have multiple business units. For example, in July, Goldman Sachs reported blockbuster second quarter results thanks to its trading division. In fact, it was the investment bank’s biggest outperformance in almost a decade. Investors will be tuned in to reports from these financial institutions to see how they did this past summer.

On Thursday, Taiwan Semiconductor Manufacturing Co Ltd (TSM), Walgreens Boots Alliance Inc (WBA), and Morgan Stanley (MS) report among others. Last week, Morgan Stanley said it was buying fund-manager Eaton Vance for $7 billion. The acquisition highlights Morgan Stanley’s transition away from trading and into the asset management business. Morgan Stanley also recently closed its all-stock takeover of E*Trade, which was valued at $13 billion when it was announced in February. Analysts will be eager for more color on these transactions and future plans for these new businesses.

To end the week, a host of other companies highlight their results on Friday, including Bank of New York Mellon Corp (BK), VF Corp (VF), and Kansas City Southern (KSU). Roughly a month ago, Kansas City Southern turned down a $20 billion takeover bid led by Blackstone Group (BX) and Global Infrastructure Partners. The consortium priced their offer at $208 per share, which the railroad operator said was too low. Investors will want to learn more about this bid during the call.

Another week, another round of virtual events for your calendar. From negotiating salary to setting yourself up to thrive in the long-term—be sure to register in the SoFi app. 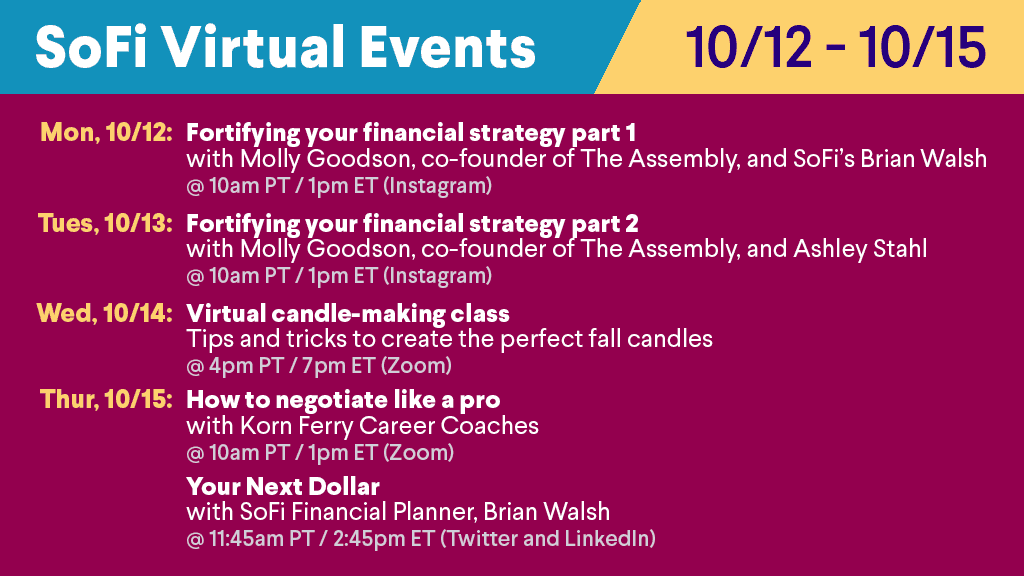 Please understand that this information provided is general in nature and shouldn’t be construed as a recommendation or solicitation of any products offered by SoFi’s affiliates and subsidiaries. In addition, this information is by no means meant to provide investment or financial advice, nor is it intended to serve as the basis for any investment decision or recommendation to buy or sell any asset. Keep in mind that investing involves risk, and past performance of an asset never guarantees future results or returns. It’s important for investors to consider their specific financial needs, goals, and risk profile before making an investment decision.
The information and analysis provided through hyperlinks to third party websites, while believed to be accurate, cannot be guaranteed by SoFi. These links are provided for informational purposes and should not be viewed as an endorsement. No brands or products mentioned are affiliated with SoFi, nor do they endorse or sponsor this content.
Communication of SoFi Wealth LLC an SEC Registered Investment Advisor
SoFi isn’t recommending and is not affiliated with the brands or companies displayed. Brands displayed neither endorse or sponsor this article. Third party trademarks and service marks referenced are property of their respective owners.
SOSS101201