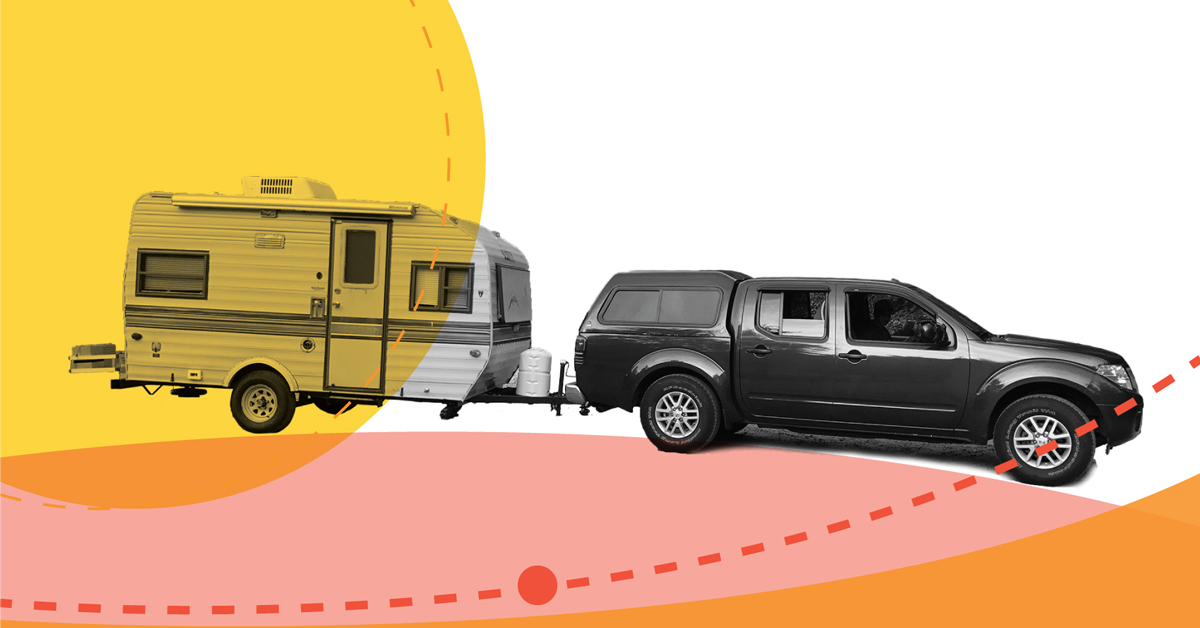 From the Office To the Open Road: How One Woman Turned a Personal Loan Into a Road Trip Across America

Having lived her entire life in Greensboro, North Carolina, Katie Shank, 26, was ready for a change. After graduating with a bachelor’s in history from University of North Carolina Greensboro, Katie was working an office job at a large clothing corporation, as a liaison between departments. It was paying the bills, but not exactly her dream job.

So when her boyfriend, Jordan, asked if she wanted to quit her job and buy an RV to travel the U.S., Katie jumped at the chance. With the help of a mysterious Craigslist ad and a $9,000 SoFi personal loan, Katie and Jordan now have a mobile home from which they can search for their ideal city. Soon they will be headed west to make a new life for themselves, all within the comfort of their tiny home on wheels.

Katie spoke to us about how she found the courage and the funds to make this cross-country travel dream come true. She took us through the process of everything, from finding and renovating a beat-up RV, to searching for off-the-beaten-path campsites to park her new home without paying a dime. Her guts and determination remind us that travel is within reach—no matter what your budget is.

So what made you decide to quit your jobs, buy an RV, and travel across the country?

I’ve always wanted to travel across the country. I used to, well, I still do want to be a truck driver. My boyfriend and I used to drive to Ohio twice a year; it’s an eight-and-a-half hour drive since we’re living in North Carolina. We’ve always been fascinated by truck drivers, thinking about everywhere they’ve gone. We’d been dating for about three months, and we were watching some documentary on Netflix when he said to me, ‘I’m really ready to get an RV with you and just travel.’ We had never discussed it before, and I told him, ‘I’ve always wanted to do that too!’ It was really weird since neither of us had ever said [that dream] aloud, and I didn’t think he was serious since we’d only been dating three months. But the next day, he started looking at trucks online. And then a month later, he bought a truck—that’s how it started.

So how did you find the RV?

We discussed it and decided to buy an older, beat-up RV on Craigslist. We were looking up all kinds of campers from all across the country, and I found a 90088 Scotty, which is a type of travel trailer, in South Carolina. I think there were only three pictures on Craigslist. Normally on Craigslist you can text the person, or they have an email. But this person just said, ‘DO NOT TEXT.’ I put them at the bottom of my list, because I didn’t want to call, but eventually Jordan said, ‘Please just call him, this might be a good thing.’ 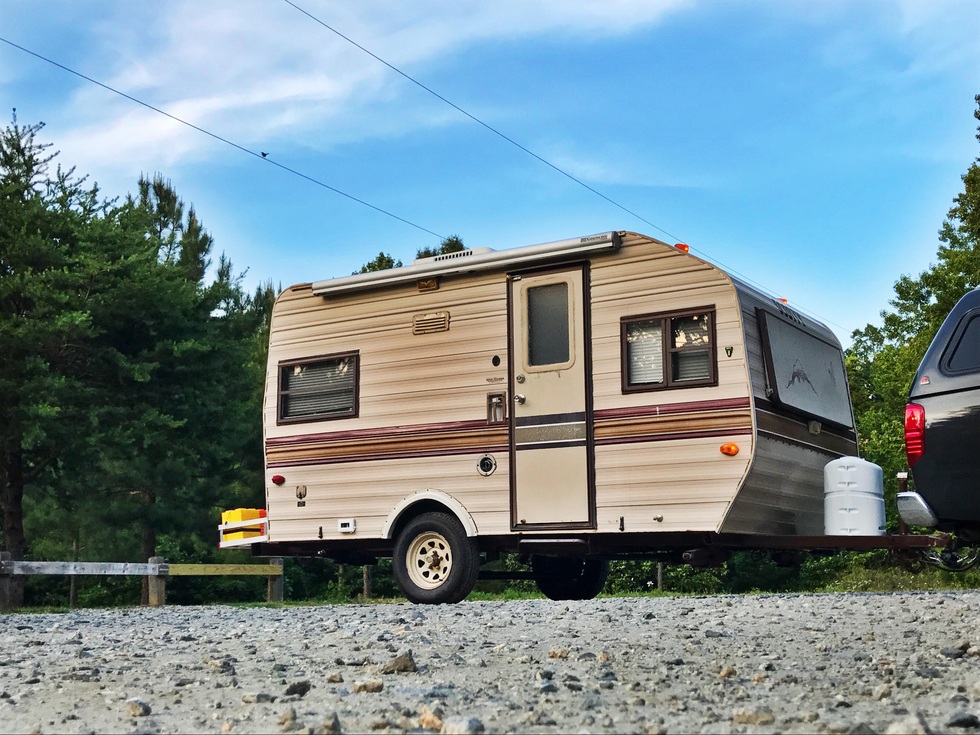 When did you decide to get a SoFi personal loan?

Well, the camper was $4,000, and neither of us had that much saved up yet. We looked it up and tried to figure out if a bank would give us a loan. You can get financing for a car payment, but they don’t do that for RVs, and definitely not for anything older than 2011. I googled it, because I knew personal loans were a thing, but I’d always heard they were horrible. I was thinking personal loans must have an APR of 45% or something ridiculous.

I looked at one blog and found the three best lenders for personal loans, and SoFi was number one. So I did some research and saw they were a very legit company. We applied for $9,000, since we thought we’d need to spend $5,000 on renovation. We applied for the loan and got the money the next day, and then we drove to South Carolina. My boyfriend had never driven anything pulling an RV before, but we picked it up and drove the four hours back on 85 North, which is a very busy highway. And somehow we survived.

What did you use the renovation money for?

We took out $9,000; we used $4,000 to purchase the RV, and then the other $5,000 to purchase stuff you need for an RV, like a sewer hose, water jug, and levelers. We’ve done the caulking and the most we’ve spent so far has been on batteries, because our RV did not have batteries, and we don’t plan on staying in a lot of [RV camps], so we need to have battery power. We are also going to buy solar panels, which aren’t too expensive. But most people that do what we’re doing have a battery bank and have solar panels that are used to charge the battery. Then you don’t have to stay in the RV camps, which is more expensive.

Where are you headed first?

I am in charge of the itinerary because I’m a control freak, and I love maps. So I’ve drawn out our route, and we’re planning on going up the coast, and visiting my sister in D.C. Then I have relatives in New York City, and we were going to go up to Maine, then New Hampshire, and we might cut across Canada to the Upper Peninsula of Michigan because neither of us have been there, and it’s supposed to be beautiful. Then we’re going to go through South Dakota and Mount Rushmore, and then over to Wyoming and to Yellowstone (all the parks over there, really), and then up to Montana.

We know we want to live on the West Coast, so we’re going to go to the major cities, like Seattle, and stay there for a week, get an Airbnb, and see how we like the city and if we think it’s a good culture. And then we’re going to move down to Portland and do basically the same thing. Once we’ve figured out where we want to live, we’re going to go down to Arizona, New Mexico, and Colorado. There’s a lot of free camping, or ‘boondocking’ there, so we don’t have to pay to live anywhere while we apply for jobs and look for apartments and stuff. 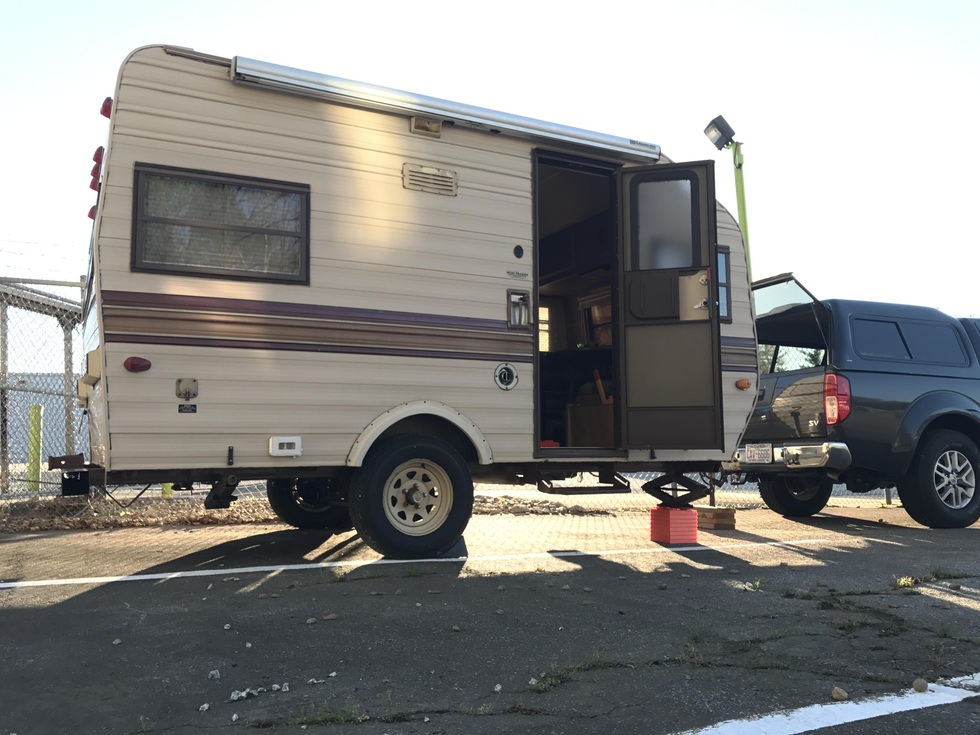 So you’re basically just going to travel until you find a place that matches you?

Right, because we both grew up [in North Carolina], have lived here our entire lives, and we really don’t want to live here anymore. So instead of just saying, ‘Okay, well we want to live in Portland, let’s move there,’ we want to get a sense and just kind of feel it out, and figure out where we fit the most.

How are you planning on paying back your personal loan?

We’ve already saved up enough money to pay the minimum payment for the next six months. We are hopeful that we will be able to sell the trailer when are finished to pay off most of the loan. The remaining balance could easily be paid off in six months once we find new jobs. There is also a possibility we could find remote work or sponsors while on the road. Any sponsorship money from Instagram or a blog would go toward paying off the loan.

What are you most excited to see?

I can’t wait to see Glacier Mountain National Park, and actually see glaciers in real life! Even though they’re kind of going away… but I think I’m most excited to be able to see things in person that I’ve seen online or on Instagram and have always been amazed by. I cannot wait to know that I’m visiting, but if I wanted to, I could stay for a while because I’m in charge of my housing. I think that’s something that’s very special about being in an RV, because your house is nearby no matter what.