They’re back! We analyzed more than 60,000 student loan refinancing applications from January 2014 to September 2016 to tally SoFi’s “No BS” Return on Education 2017 MBA Rankings. MBA seekers should dive in, because this data matters more than a stunning campus or which successful CEO is an alumnus.

Grounded in verified income and debt—not just reported figures—our rankings represent an accurate and objective look at outcomes for those who are three years out of school. And that’s the whole point of getting your MBA, right? To graduate and earn a strong salary that isn’t eviscerated by student loan debt!

Given the high cost of tuition and steep interest rates on graduate student loans, Return on Education (ROED) varies widely. And you obviously want yours to be the best it can be so you can stop owing and start earning!

Through SoFi’s analysis, you’ll find out how the top MBA programs stack up when it comes to average salary and student loan debt. 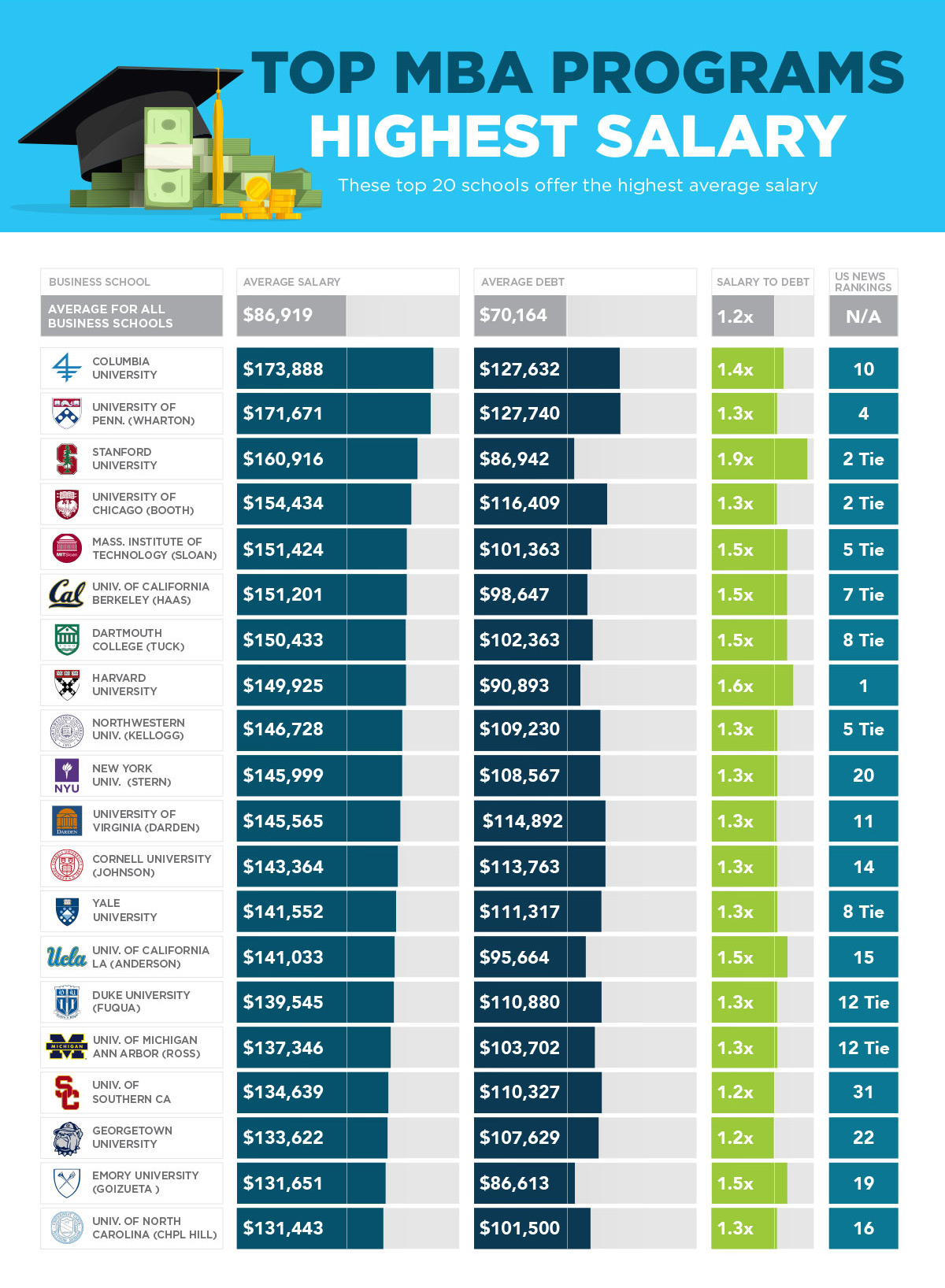 As you skim the list of the MBA programs that garner the highest salaries for graduates, you’ll notice that location matters. A number of institutions are found in major business hubs, such as New York City, Boston, Chicago, and Los Angeles, where salaries tend to be higher. Reputation factors in heavily, too. In fact, Princeton and Yale are the only Ivy League colleges that do not appear in our top 20 for MBA programs.

When compared to last year’s top rankings, some things haven’t changed all that much. Columbia University, University of Pennsylvania, and Stanford University are still the top three. And the only new addition to our list of 20 is Emory University’s Goizueta Business School, which comes in at the 19th spot thanks to its grads earning an impressive $131,000 annual salary, bumping off University of London.

Recommended: Ready, Aim, Startup – How to Dominate the Entrepreneurial Space With an MBA

The salary figures themselves are quite remarkable. For instance, Columbia and UPenn boast graduates who earn more than $170,000 a year; compared to the average annual salary of $86,900 among all business school graduates, that’s almost double. In addition, Massachusetts Institute of Technology grads saw an average annual pay increase of about $10,000, and Cornell MBA grads’ annual paychecks went up by $5,000.

Because of the elite and selective nature of these MBA programs, you’ll find a lot of overlap with more traditional lists, such as the U.S. News & World Report Best Grad Schools tally. Only two institutions in our top 20 (University of Southern California and Georgetown) rank slightly lower in U.S. News’ list (31 and 22, respectively). Otherwise, both lists affirm the best of the best.

But best and best value are two different things. 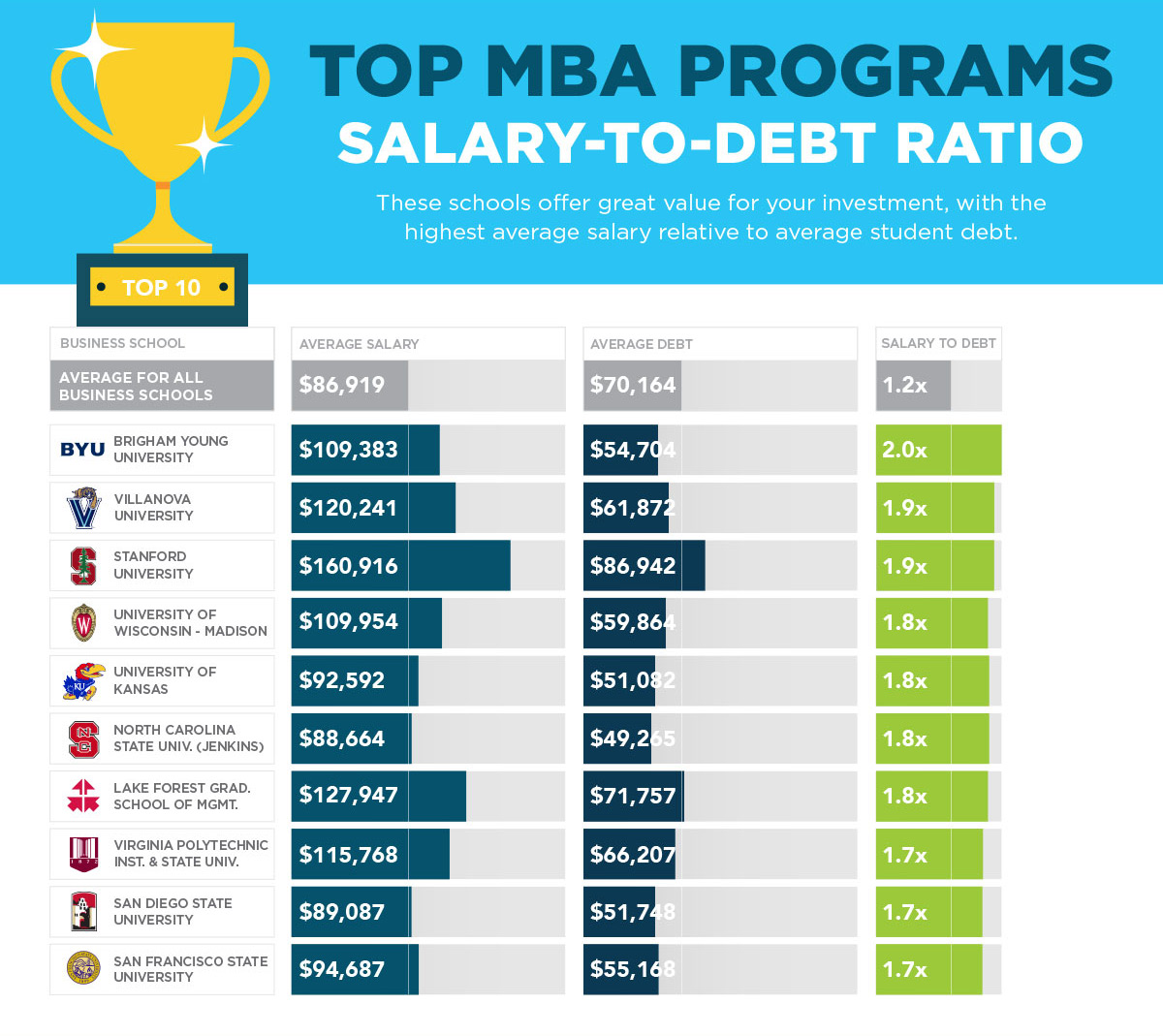 What really sets SoFi’s rankings apart from others is the factoring in of student debt in addition to earnings potential. On our list, you’ll discover some lesser-known MBA programs that don’t make an appearance in U.S. News’ top 20.

With a salary-to-debt ratio of 2.0, Brigham Young University takes the top spot, while the University of Wisconsin-Madison earns the number 4 slot, and Lake Forest Graduate School of Management comes in 7th. Compared to last year’s salary-to-debt ratio rankings, seven out of the 10 programs are new additions. It’s also worth noting that two state universities—San Diego State and San Francisco State—make the list, sporting 1.7 salary-to-debt ratios, far above the average for all business schools, which is 1.2.

So what makes these MBAs such a good value? For one thing, only four of the 10 have graduates reporting annual salaries below six figures. Plus, in most cases, these programs cost far less than those offered at elite schools. For instance, Brigham Young’s tuition is about two and a half times less than that of top-tier MBA programs. And North Carolina State University Jenkins MBA has the distinction of generating the least amount of student debt on the list, just slightly over $49,000.

The anomaly here is Stanford, which appears on both the highest salary and best salary-to-debt ratio lists, taking the number 3 spot in each. Despite the cost, the salary earned by Stanford grads is so high ($160,000) that it’s nearly double the average debt ($86,000). 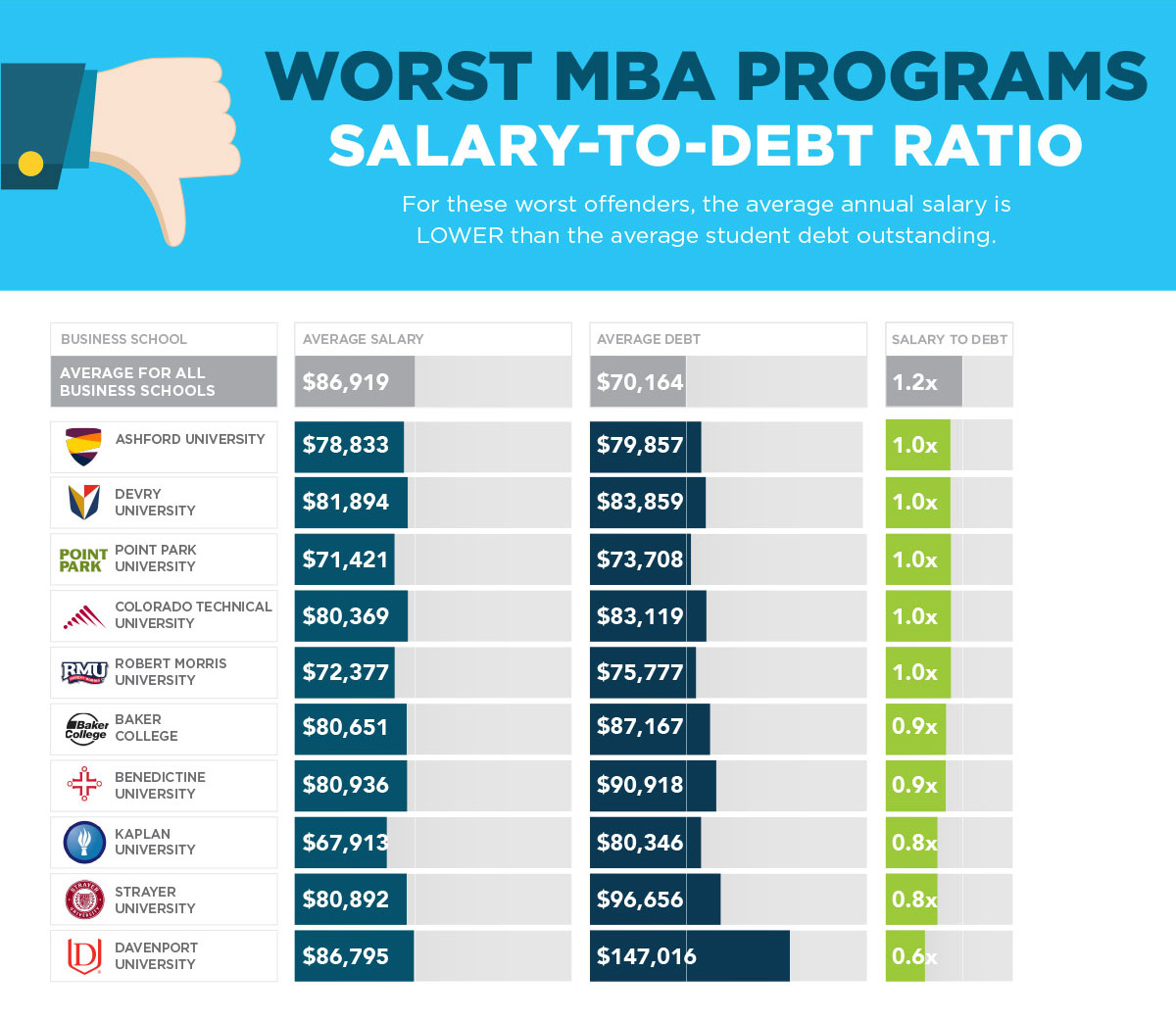 Because it helps to see the bad against the good, our list also highlights the bottom of the ROEd barrel. As a whole, five for-profit schools (Ashford, DeVry, Kaplan, Strayer, and Colorado Technical) have come under fire over their recruiting practices and guarantees of specific career outcomes. DeVry University, for instance, recently reached a settlement with the U.S. Department of Education over claims that its 90% job placement rate could not be substantiated.

Among the nonprofits and overall, Davenport University ranks the worst, with a 0.6 salary-to-debt ratio because of its list-leading $147,000 of graduate debt. That’s more than double the national debt average of $70,000. It may be because its MBA program is not accredited by AACSB International, which is generally considered the top accrediting body for MBA programs, and selectivity isn’t very stringent.

Related: Grad Degrees That Pay Off – Getting the Most Bang For Your Graduate School Bucks

Another common factor is that graduates of these 10 institutions report salary figures well below six figures. Again, location could play a role—Baker College (with grads earning $80,000 annually) is in Flint, Michigan, and Point Park University (with graduates earning $71,000 a year) is in Pittsburgh, Pennsylvania.

If an MBA is in your future, it’s likely because you want to advance your career and aspire to greater wealth. That’s why going beyond traditional rankings to really examine what your ROEd is a smart move. But to remain astute beyond that, be sure to also research in-demand graduate programs, as well as those all-important student loan refinancing options.The best way to maximize the value of your MBA is to make a wise educational investment up front and then pay back your debt in the smartest way.

Don’t keep this insider info all to yourself—share SoFi’s 2017 MBA Rankings with friends, and let them in on ways they can get rid of their student debt faster.