Ready, Aim, Start-Up: How to Dominate the Entrepreneurial Space With an MBA

Close to seventy SoFi members attended, each taking advantage of a membership perk that provides them the opportunity to network with like-minded goal-getters in a laid-back setting. These members, aspiring entrepreneurs with MBAs or currently enrolled in graduate school, are among those contributing to a growing trend of B-school graduates eager to work for themselves immediately or shortly after graduation.

Institutions such as Harvard Business School, Columbia Business School, The Wharton School of the University of Pennsylvania, and Stanford’s Graduate School of Business can take some credit for that optimism. All have expanded their entrepreneurial programs and offerings to better prepare graduate students to dominate the start-up space. 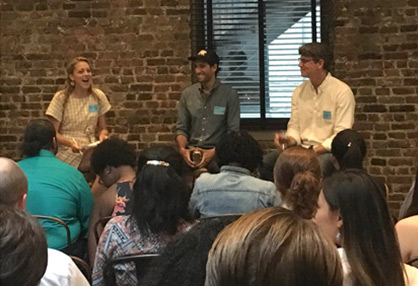 Yet, despite the uptick in MBA grads opting to be their own bosses, many still find it hard to make the decision to pursue their passions on a full-time basis. What’s keeping those could-be founders from pulling the proverbial trigger?

The most obvious answer: money.

Many MBA graduates are faced with an income conundrum: Should they stick with the security of a corporate job and an MBA salary or leave to follow their bliss and possibly amass millions of dollars down the road?

A steady paycheck now can mean having the funds to repay massive student loan debt sooner rather than later. And for some, that means a lot. 19% of U.S. college grads with student debt choose to delay entrepreneurship because of their loans (via Gallup). For borrowers in debt $25,000 or more, that figure jumps to 25%.

Event attendee Adler Merveille, a 32-year-old SoFi member, lives this statistic. After incurring six-figure student loan debt from his undergraduate work at Duke University and graduate studies at University of Michigan’s Ross School of Business, he chose to put his entrepreneurial endeavors on hold while he focuses on earning. “I’m working at Verizon so I can continue to build my skills, pay down debt, and save cash to fund a business,” he said.

Despite what he owes in student loans, Merveille is optimistic. He believes that his MBA was not only a great investment, but also a necessary first step in securing his future startup success. “My MBA was the quickest way to accelerate my progress when it came to understanding marketing in a robust, strategic way, and learning how to build a business.”

But with corporate recruitment at an all-time high, the allure of a sweet starting salary and sign-on bonus right out of school can make joining the ranks of corporate America too good to pass up. According to a GMAC Corporate Recruiters Survey, “some 88 percent of corporate recruiters who work directly with business schools plan to hire MBA graduates in 2016—up 8 percentage points from last year and 33 percentage points higher than 2010, the lowest point of the Great Recession.”

In addition to student loan debt, other factors, such as low confidence and limited job experience, can keep MBA talent from taking the leap and starting a business.

Daniel Ferrero, a financial analyst and prospective MBA student, who also attended the event, is still figuring out where his strengths lie. He hopes that joining an entrepreneurial program at a top business school like Columbia, Harvard, or NYU will fill his knowledge gaps. “In five years, I want to start a consulting company,” said 27-year-old Ferrero. “But before I venture out on my own, I need to find out where I fit in. I need to strengthen my background in strategy and business operations.”

Bachmann and LeBlanc, both alumni of SoFi’s Entrepreneur Program, hold MBAs. Bachmann earned his from Columbia University’s Business School; LeBlanc scored his at New York University’s (NYU) Stern School of Business. If any two people know that entrepreneurship is a worthwhile pursuit and startup success after graduate school is possible, it’s these guys. They’re smart, thoughtful, and they didn’t hold back in sharing what they’ve learned with our members. 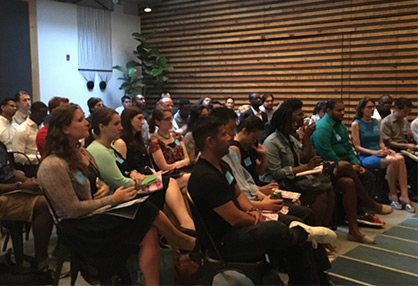 “Two Cents” That Could Be Worth Millions

Know your “when.” Starting a business is a very serious and personal decision—one based on a number of tangible factors, including capital, market trends, and product readiness, as well as intangible factors, such as gut instinct, confidence, and support. Bachmann and his co-founder Ben Gordon used their 18 months at Columbia to weigh these and other considerations and launch Wandering Bear. According to Bachmann, timing was everything, “Had we waited until the second year of graduate school to start, the company probably wouldn’t exist today,” he said. In other words, their impending student loan debt would likely have pushed them to look for jobs after graduation.

LeBlanc, on the other hand, worked for a couple of years before starting Good Stock Soups. It wasn’t until after parting ways with Goldman Sachs that he started to seriously consider working for himself. In fact, LeBlanc viewed his departure as a most opportune time to pivot. He used his first months of unemployment to brainstorm and create Good Stock’s first recipes. “I came up with over 150 potential names for the company and just allowed my consciousness to flow,” he said.

Do what it takes to make the right moves early and often. Procrastination kills business success, as does “analysis paralysis”—overthinking a decision to death. Firm deadlines, by contrast, force progress. Knowing this, Bachmann and LeBlanc pushed themselves to enter the marketplace and set exposure goals: Bachmann and Gordon used pitch competitions to get their idea and brand in front of investors and industry bigwigs, while LeBlanc applied to be a vendor at Smorgasburg, a popular food festival in Brooklyn, to grow his customer base.

For the risk-averse entrepreneur, using these strategies early in the start-up phase is ideal, as opportunities can be explored without abandoning a full-time job — and the salary that comes with it.

That course you loved? It just might be step one in a tour de force. LeBlanc took entrepreneurship courses at NYU, in addition to classes in economic history and business operations. “I found they were useful for Good Stock’s brand development and managing the company day-to-day, ” he said.

Similarly, Bachmann and Gordon took concepts from case studies and class discussions at Columbia, and applied them to the launching of Wandering Bear.

Grad school really is for hooking up. B school is the perfect place to meet people who can play major, long-term roles in your company’s success. Professors can become dynamic business mentors or put in you touch with your first investors. Classmates can become your first clients, customers, or business partners.

Bachmann and Gordon were grad school classmates before business partners. And LeBlanc used feedback from his graduate school buddies when testing everything from menu items to pricing. “All of my friends were supportive,” he said. “It was easy to bounce ideas off of them and get opinions.”

Be too legit to quit. Allow authenticity to guide your business growth. When you scale your business based on your interests, values, and goals, making decisions that preserve the integrity and identity of the brand becomes easy. Attending to the unique marketing positioning of your company not only creates a loyal customer base, but also it garners a deep level of respect from employees and competitors.

As Bachmann and LeBlanc scale their companies, they keep their endgames in mind. Bachmann is driving Wandering Bear to become a leading brand in the coffee world. LeBlanc, however, doesn’t want to compete with the behemoths of his industry. “I’d prefer to have lower margins so I can open chef-run restaurants in different cities across the U.S., and maintain the quality of my soups,” he said.

You don’t have to found the next sleek, tech-driven company to be successful in today’s entrepreneurial landscape, despite what it may seem. Wandering Bear and Good Stock are crushing it in the food and beverage sector. And people are noticing and learning from them.

Melissa Domoraud, 27, will enter The London School of Economics in the fall to pursue an MBA in finance. She left the event feeling reassured that she’s got what it takes to make her lipstick company, Kolorelle, flourish globally. During her first semester, Domoraud will travel to Africa to open up two lipstick pop-up shops—one in Dakar, Senegal, and the other in Douala, Cameroon. “I can pursue my MBA and focus on my company at the same time,” Domoraud says, “I’m going to apply whatever I learn in class directly to my business, just like Matt did.”

SoFi has many resources to help aspiring entrepreneurs who have student loan debt and are working full-time on their businesses. If you’re interested, visit sofi.com/refinance-student-loan to learn more about how we can help.