January’s Markit manufacturing PMI, ISM manufacturing index, and motor vehicle sales reports will all be released today. In December, US manufacturing accelerated at the fastest rate seen in over six years. Producers of US-made goods had the strongest control of pricing they have had since 2011 as the coronavirus pandemic has disrupted international supply chains.

On Wednesday January’s ADP employment report, Markit services PMI, and the ISM services index will be released. Investors will be closely watching the ADP employment report as December marked an end to the seven-month growth streak in private payrolls. Private payrolls fell by 123,000 in December, though economists surveyed by Dow Jones predicted 60,000 jobs would be added.

On Friday January nonfarm payrolls, unemployment rate, average hourly earnings, as well as December’s trade deficit and consumer credit will be released. Nonfarm payrolls fell by 140,000 in December despite consensus expectations of a 50,000 gain. Those job losses were largely concentrated in the hospitality industry as bars and restaurants were forced to close.

On Wednesday Paypal Holdings (PYPL) will release earnings. In January PayPal became the first foreign operator to take full control of a payments platform in China. It acquired the remaining 30% stake in China’s GoPay on the last day of 2020. PayPal already owned a 70% stake in GoPay, which it bought earlier in 2020. The move signaled that PayPal is interested in becoming a larger player in the international online payments market.

Snap (SNAP) will report earnings on Thursday. Late last month, Snapchat announced it would join almost every other app on the market in introducing a new dark mode feature for users in low light. The new feature is not yet available for everyone because Snapchat is doing a phased rollout, but it could increase the app’s popularity among fans of dark mode and people who may want to decrease their exposure to blue light.

On Friday Regeneron Pharmaceuticals (REGN) will hand in its report card. In January the company announced it had reached a deal with the US government to provide 1.25 million doses of its coronavirus antibody treatment. Regeneron’s shares rose 2.6% after the announcement, and hopeful analysts forecast rising revenues for the pharmaceutical giant in 2021.

One month down, eleven more to go! Start your February with two events that’ll have you ready to conquer your goals, and your finances—live this Thursday on LinkedIn, Twitter, and Zoom. Register for upcoming events in the SoFi app! 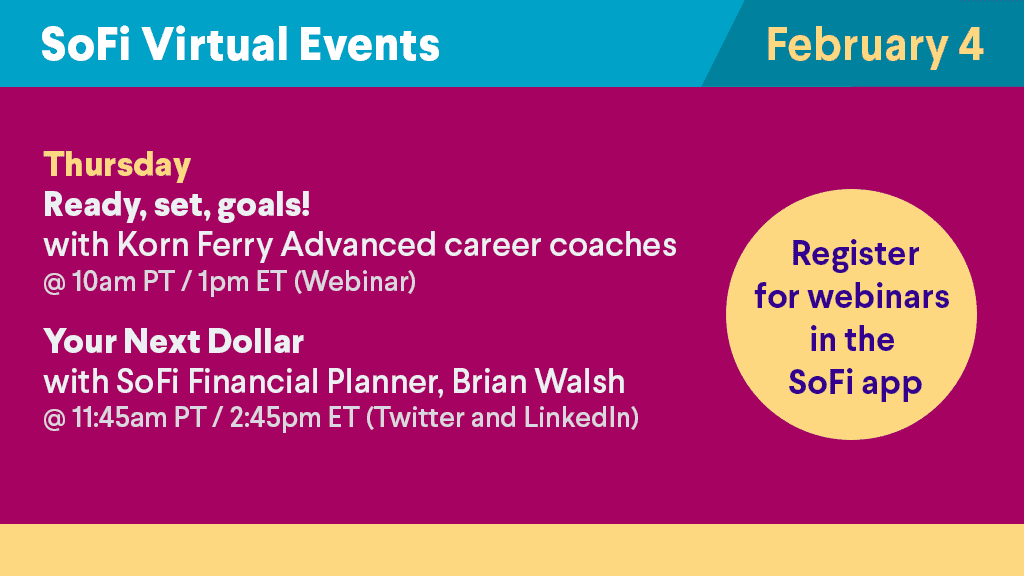 Please understand that this information provided is general in nature and shouldn’t be construed as a recommendation or solicitation of any products offered by SoFi’s affiliates and subsidiaries. In addition, this information is by no means meant to provide investment or financial advice, nor is it intended to serve as the basis for any investment decision or recommendation to buy or sell any asset. Keep in mind that investing involves risk, and past performance of an asset never guarantees future results or returns. It’s important for investors to consider their specific financial needs, goals, and risk profile before making an investment decision.
The information and analysis provided through hyperlinks to third party websites, while believed to be accurate, cannot be guaranteed by SoFi. These links are provided for informational purposes and should not be viewed as an endorsement. No brands or products mentioned are affiliated with SoFi, nor do they endorse or sponsor this content.
Communication of SoFi Wealth LLC an SEC Registered Investment Advisor
SoFi isn’t recommending and is not affiliated with the brands or companies displayed. Brands displayed neither endorse or sponsor this article. Third party trademarks and service marks referenced are property of their respective owners.
SOSS21020101