Yes, You’re Underpaid: Here’s Why and What to Do About It

I thought of a dozen clever ways to kick off this blog post, but instead I think I’ll just cut to the chase: You’re probably underpaid.

Yep, I’m talking to you—especially if you’re a young professional age 25 to 40-something, with at least some college education. How do I know? For one thing, I work with people like you every day in my role as Head of Career Strategy at SoFi. I know firsthand that, unless you’ve worked with a coach like me, it’s unlikely that you’ve asked for a raise in the past year or negotiated a pay increase the last time you switched jobs. I also know you’re probably confused about how much you should be paid, and that even though you were told that a college degree would help you earn more money, your paycheck is no match for your student loan debt—and it’s stressing you out.

But you don’t have to take my word for it. In a recent survey SoFi conducted in July 2016 of nearly 1,500 people, we found that over 50% of young, college-educated professionals simply do not negotiate salary for new or existing jobs. That proportion is troubling enough on its own, but couple it with the wage stagnation millennials have experienced their entire working lives, and you’ve got a recipe for a whole generation of underpaid professionals. 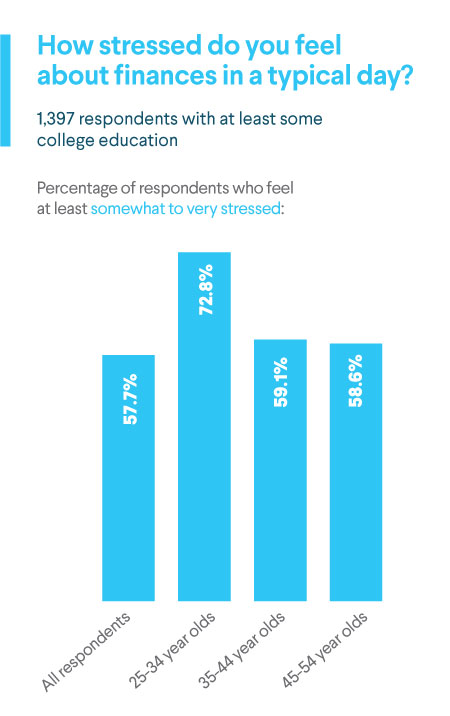 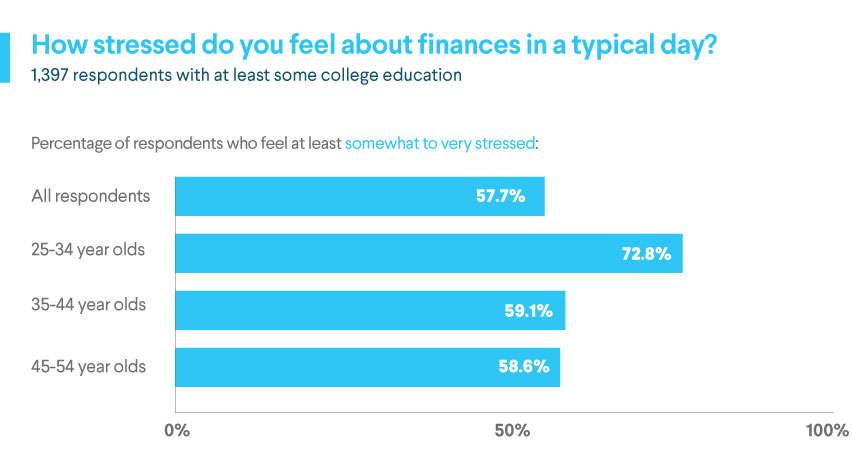 But enough of that doom and gloom. I want to focus on what you can do to get paid what you’re worth, because, the truth is, you have a lot more negotiating power than you think.

Read on to learn some important salary truths uncovered by our survey, what they mean for you, and how to turn troubling trends around so that they work in your favor and alleviate financial stress.

First things first: Why am I underpaid?

There are a lot of macro- and micro-economic factors at play when it comes to pay, but two big ones are ongoing wage stagnation—wages have been flat or falling for most households since 2005—and your own ability to negotiate a higher salary. Because wage stagnation is out of your control, it’s more important than ever to learn how to negotiate, which is something you can control.

But I hate asking for a raise.

I get it, and you’re not alone. As noted earlier, over 50% of our survey respondents admitted they didn’t negotiate their current salary or their pay increase at their last promotion. So it’s pretty clear that salary negotiation just might be the most despised career activity since public speaking. 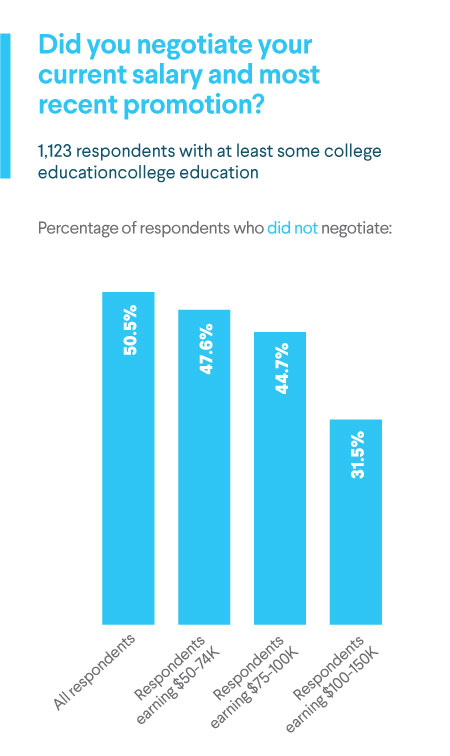 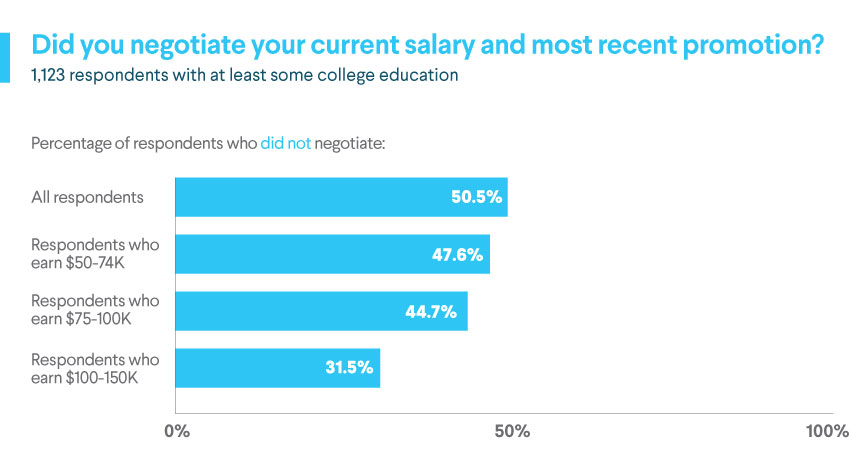 Related: Four Ways to Build your Career Through Conversations

But here’s the thing: As stressful as it is to ask for more money, it’s even more stressful to not ask. Nearly 80% of our survey participants reported feeling at least some anxiety about finances on a typical day, with 25-34 year olds experiencing the worst of it.

So, if you want to pay back your student loans, build wealth, and escape the millennial money gap that’s causing so much angst, it’s crucial that you get paid what you’re worth. And the only way that’s going to happen is if you actually know what you’re worth and can confidently and effectively negotiate your salary.

How do I know what I’m worth?

The big challenge with negotiating salary is that most people don’t know their market value. For example, when you’re in talks with a new employer, you don’t want to come in too high (and risk losing the gig) or too low (and risk being underpaid). And when you consider that switching jobs is one of the best opportunities to increase your pay, you don’t want to get that number wrong.

We asked our survey participants how they determine compensation, and we weren’t surprised to learn that 49.6% research online using platforms such as Glassdoor and PayScale. While sites like those can be helpful in providing a pay range, our survey results also show that 63.6% of respondents who are high earners (making over $150k a year) prefer to consult with friends, family members, and former colleagues. Clearly, discussing pay openly is becoming less taboo, and smart negotiators are using this fact to their advantage. 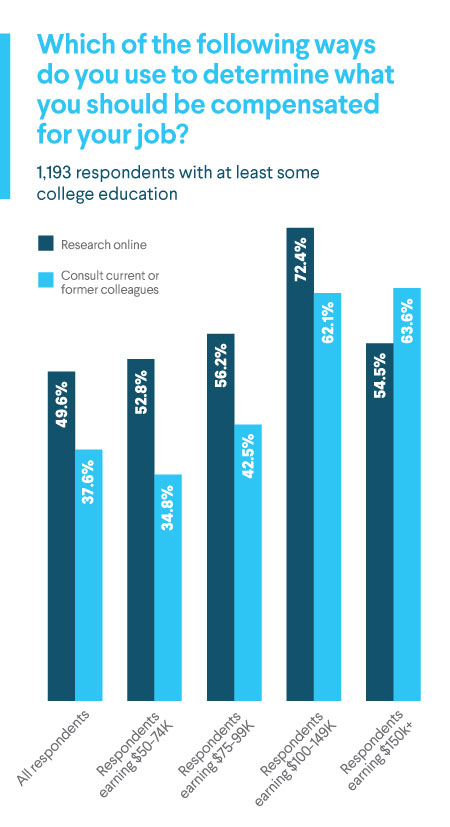 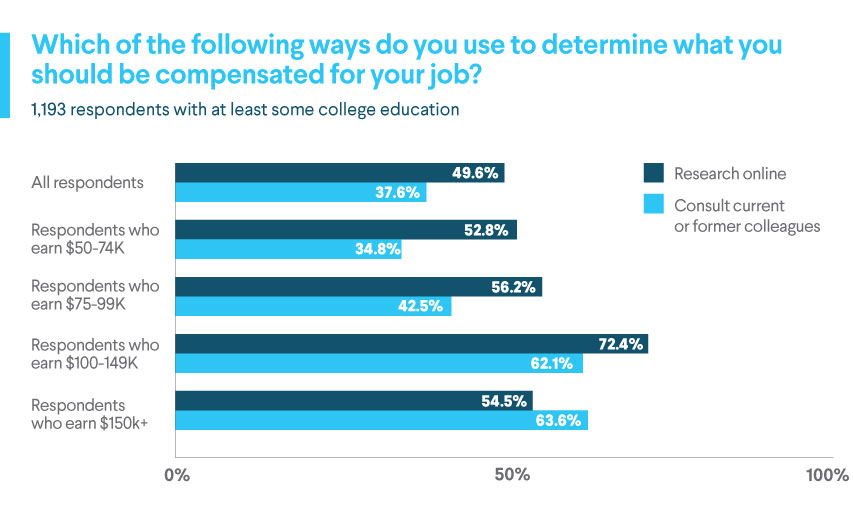 When do I ask for raises?

You’ve probably heard that staying at a job too long reduces your lifetime earning potential. That’s likely due to the fact that companies are doling out pay raises at lower rates and employees simply aren’t asking for more money. But if you like your employer, you might be there for a while and don’t want your income to suffer. So, while it’s true that significant pay increases typically come when switching jobs, asking for a raise periodically— especially when things are going well—should be part of your career strategy. If you wait until you’re frustrated and on your way out the door, you probably won’t get what you want.

Does my gender play a role?

You bet. Our survey uncovered some eye-opening information about how men and women differ when it comes to this subject. For example, only 15% of female respondents reported being “very confident” in understanding their market value and how much their compensation should be relative to their degree and industry, compared to 20% of males. 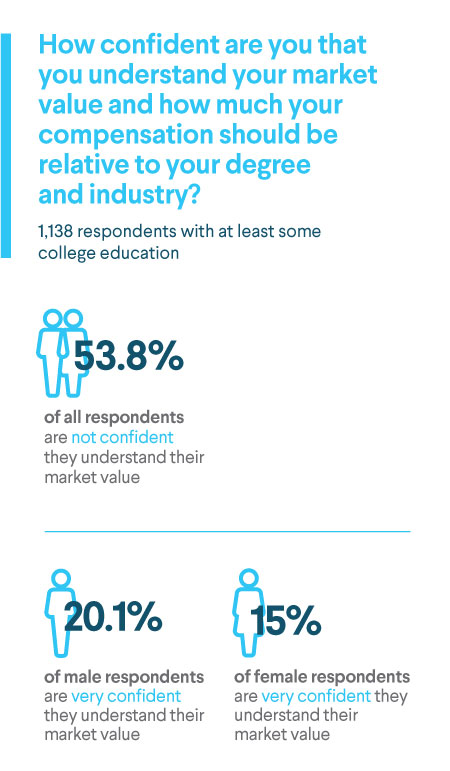 And 55% of females didn’t negotiate their salary at the time of their last promotion, or for increases after that, compared to 45% of men who didn’t negotiate. For men earning six figures, the number who did negotiate increases significantly to over 40%. When you consider that full-time female workers earn 79 cents for every dollar earned by men, it’s crucial that women take control where they can—and salary negotiation is one such opportunity. 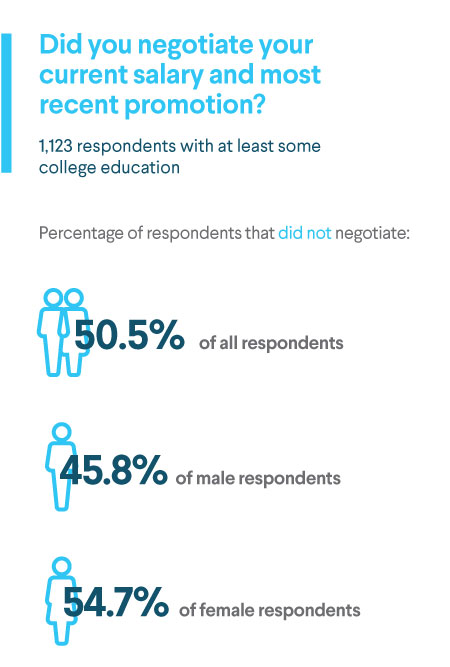 Okay, you’ve sold me. How do I put all this info into practice?

There are a few big takeaways here. First, you won’t get what you don’t ask for. So, don’t let another job transition pass you by without aiming for at least a 10% increase. Also, put reminders on your calendar to strategize pay raises on an annual basis.

Second, confidence is key to winning the salary negotiation game. The more information you have, the easier it will be to ask for—and get—what you’re worth. Research salary data online, be sure to take a look at our Return On Education Salary Trajectory By Degree report, and talk to people who’ve worked in similar roles as you or for companies you’re looking to join. Fortunately, more people are open to helping in this way today than ever before.

Finally, when you’re ready to take action, learn how to negotiate salary effectively. Whether you’re in talks for a new job or vying for a raise at your current one, we have a ton of resources available to help you crush the conversation.


4 thoughts on “Yes, You’re Underpaid: Here’s Why and What to Do About It”