For any startup to succeed, it takes talent, intelligence, hard work, and a love of innovation. It also helps to be connected—to have people looking out for you, especially when you’re on your way up and in need of that first big break. SoFi Entrepreneur Program member Mark Pawloski started Upkey with friends Mo Bitar and Amir Badr to help college students who didn’t come from elite backgrounds get noticed by more elite employers.

The details are distinctly 21st century, but the way Amir Badr got his start in America could have been ripped straight from the pages of a century-old paperback. He landed in Chicago in 2001, at age 17, with little money and even less English language skills. “Iran was not exactly a top-10 vacation destination in those days, and I wanted to leave the country before I was drafted into the army,” he says. 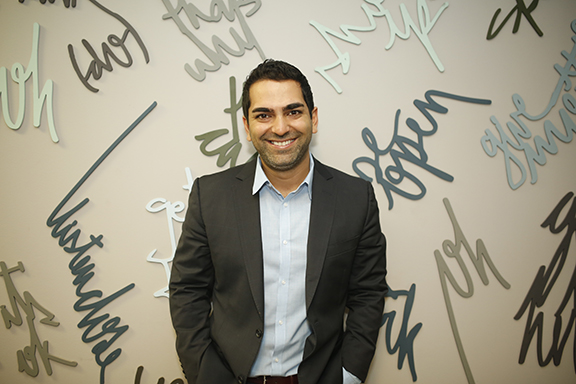 Trying but failing to hail a taxi to take him from O’Hare Airport to his uncle’s home, Amir was distressed and disoriented. Another traveler witnessed his anxiety, put him in a cab, and paid his fare—a random and Dickensian act of kindness. A few months later, Amir was clearing tables at a downtown Chicago restaurant when the airport benefactor suddenly re-appeared. The benefactor—also named Amir—introduced himself and became Amir’s friend and mentor, helping him develop as he attended college and entered the business world.

Unlike Amir’s teenage adventure, Mark Pawloski’s journey didn’t take him across the Atlantic. But it is a bit of a road tale. After graduating from Loyola University Maryland in 2005 with a degree in economics, Mark took a banking position and started working his way up the ladder. 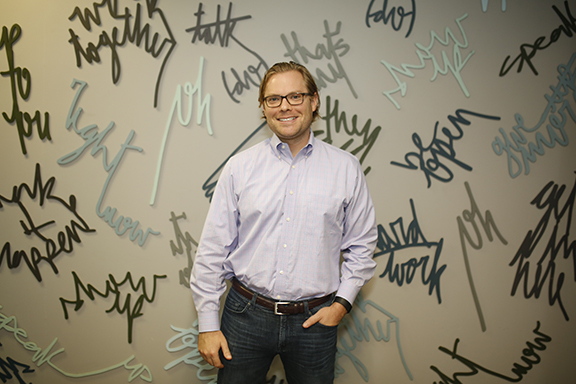 On paper, he was doing well. But banking wasn’t feeding his drive or spirit. He wanted to find a way to make a societal impact, rather than just to move the needle on balance sheets. So, in 2009, he traded his analyst’s desk for a teacher’s desk, working in Houston and later in Buffalo as a math teacher and basketball coach. He chose challenging schools with at-risk and economically disadvantaged students.

If You Like This, Check Out: #SoFi Startups: Bizzy- From Failure to 1000+ B2B Customers in 1 Year

Within four years, Mark found purpose and made tangible improvements in academics and athletics that fed his spirit. “It was humbling to get out of the banking bubble and get to a place where I knew I was really making a difference,” Mark says.

But it wasn’t enough. He wanted to change lives, create more opportunities for under-represented students at scale, and learn to do it all in a professional, scientific manner. So, after weighing MBA program options and committing to considerable expense, he enrolled at the Kellogg School of Management in Evanston, Illinois, in 2013.

After graduating from the University of Illinois – Chicago in 2008, Amir joined his mentor at an energy company. He worked for years in human resources on diversity and outreach, trying to change the culture and bring the company in contact with under-represented students who were falling through the traditional recruiting net. “I saw kids struggling without a network or a powerful ally, and I was consulting with my employer to help them become more diverse,” Amir says.

Fully aware of the importance and impact of his good fortune, Amir decided to give back. In 2009, he started Bondroom, a networking organization dedicated to helping students connect with potential mentors. Yet he still believed that there was a more fundamental, structural issue with hiring and recruiting that wasn’t being addressed.

Great connections and perfect timing almost always play key roles in the birth stories of startups, and this one is no different. A mutual friend—a former roommate of Mark’s older brother—connected Mark and Amir in late 2015 because of their uniquely aligned interests, and the two began to talk. “The friend suspected, correctly, that my desire to create something mission-driven and transformational for overlooked students would mesh well with Amir’s aspirations to disrupt the HR space,” Mark says.

It didn’t take Mark and Amir long to spell out the problem they wanted to solve: Too many employers take the same narrow approach to recruiting talent out of college; they focus on the most elite schools and the highest grade point averages (GPAs), casting aside a large chunk of the talent pool.

Amir knew from his work on the inside of corporate recruiting that biases run deep, because employers lacked the tools and the confidence to take another approach. The net result is a world where only the proverbial “1%” get a crack at the best jobs for new grads.

“We’re fighting against the traditional bias that if you didn’t go to a top school and didn’t have a 3.9 GPA, you’re probably not a top student and you’re out of luck,” Mark says. “So we aimed to create a platform to show off students who have valuable soft skills and a hard-working nature, and give employers a better lens to evaluate talent.”

The pair teamed up with Mo Bitar, a Chicago native (whose parents were born in Jordan), who had studied at the University of Illinois, and founded Upkey in 2015. They headquartered the startup in Chicago’s River North neighborhood. Amir serves as CEO, Mark as COO, and Mo (“an unbelievably talented, self-taught tech savant,” according to Mark) is the CTO. The trio then designed the Upkey Lens, a multi-dimensional approach to measure and evaluate students. 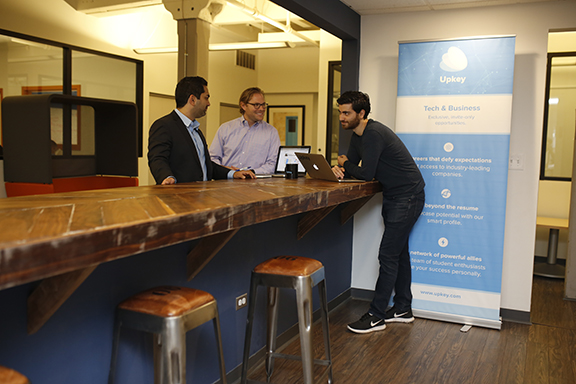 In the Upkey system, candidates are assigned three crucial characteristics (collectively called “DNA”) out of 37 different elements, including the degree to which they’re adaptive, resilient, strategic, and articulate. DNA is assigned via question-based profiling, but candidates, friends, and professors can submit their own evaluations of a candidate as well. Because Amir knows that recruiters hate reading resumes, Upkey shows them a chart that provides a visual look at skills, talents, interests, and proficiencies. 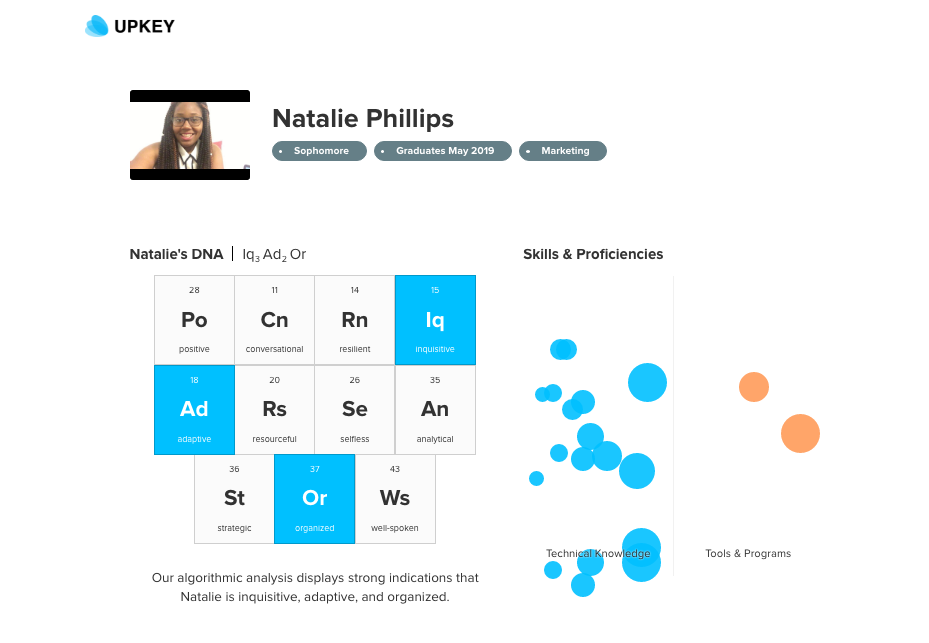 If Upkey sounds like a dating app, it’s because, in many ways, it is. Like dating applications, the Upkey system learns about the cultural fit and relationships between candidates and employers in time, as it makes more connections. “The more feedback we get, the more uncertainty we remove,” Mark says.

Upkey broke rules, early and often. After looking at usage patterns, Mark and Amir felt that recruiters weren’t spending enough time looking at profiles. They were falling back into old habits and just scanning school names and GPAs before dismissing them. So the partners moved the school and GPA to the bottom of the profile, and it worked—engagement time per profile nearly doubled.

From Passion to Success

Today, Upkey operates on an invite-only basis for its accelerated student incubator, partnering with universities that have diverse and often under-represented populations, while offering profile access on a subscription basis to top employers. Upkey currently focuses on tech-related roles and companies, and pushes recommendations to subscribing recruiters on an ongoing basis. 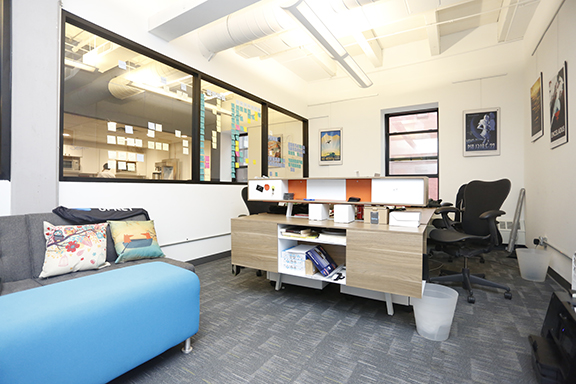 As Upkey gains momentum, its founders have more bills to pay. Mark earned his Kellogg MBA in 2015, while Amir received a University of Chicago MBA in 2016. But both say they have no regrets about the choices they’ve made to forego comfortable salaries and lengthy vacation packages of typical Fortune 500 employers in the name of pursuing their goal.

Mark borrowed from SoFi during his second year at Kellogg, and, once he became a member of the SoFi Entrepreneur Program, was given the option to defer his student loan payments. He happily took the breathing room, but sees the debt from his educational journey as just one more spur to excellence. “The fact that I have an enormous chunk of debt hanging over my head creates that much more motivation,” Mark says. 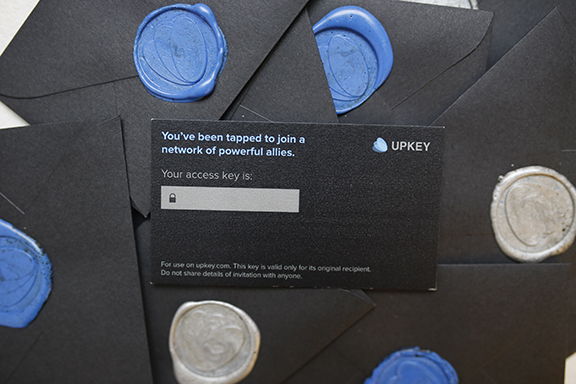 Mark is confident that the team has come up with a system that not only increases exposure for under-represented students, but also can change the way recruiting and hiring is done at all levels. The exclusive, invite-only Upkey program currently admits 21 students each week. “It takes time to change mindsets and ease companies away from their reliance on the biased metrics they’ve always used. But our approach is absolutely resonating, and we are incredibly pleased with the early feedback,” he says.

We’re looking forward to seeing how far Upkey can go in its mission to disrupt the recruiting process and pair talented, hard-working candidates with employers who want to see them succeed.

Mark and Amir’s top three tips for those looking to start a business.

1. You can’t get something off the ground unless your heart is in it and you pursue it with passion every day.

2. Starting a business isn’t glamorous; you’ll take a cut in pay and spend hundreds of thousands of dollars to do it right.

3. You’ll need stamina and resilience to take the punches, hear all the “no”s, and still remain standing.

If you’re a founder or co-founder working on your business full-time and you have student loan debt, visit SoFi’s student loan refinancing to learn more about SoFi can help you!