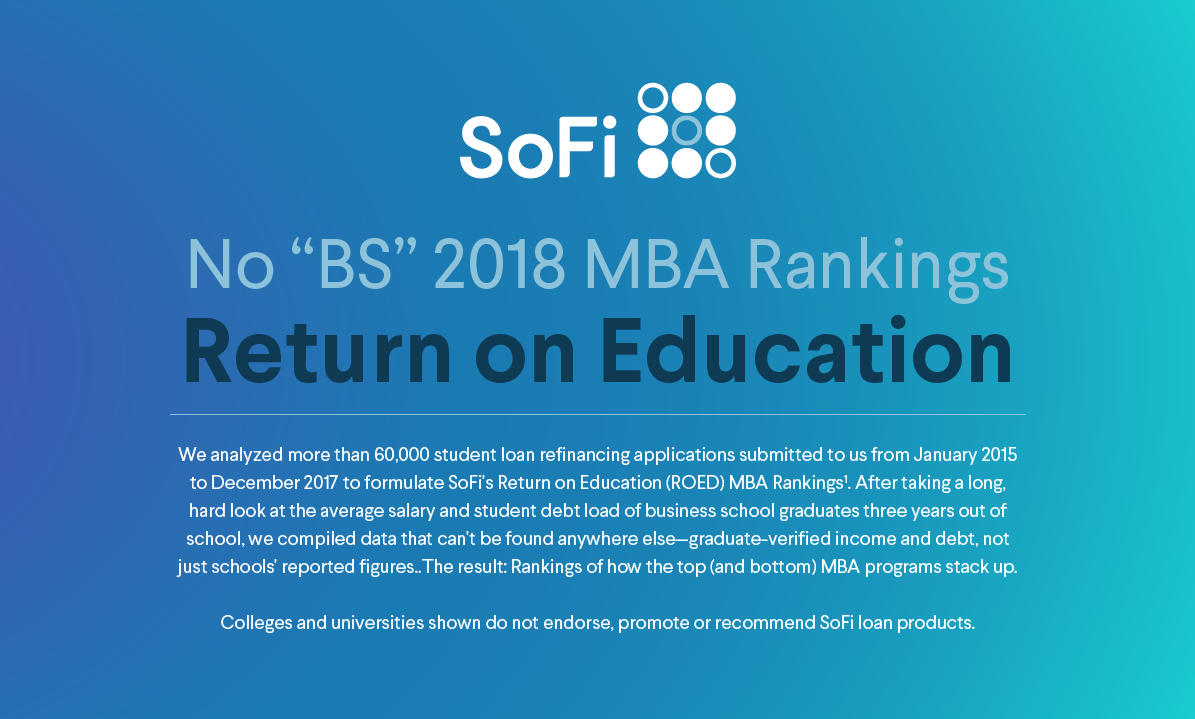 It’s that time again: SoFi’s “No BS” Return on Education 2018 MBA rankings are here. Each year, we mine the data from student loan refinancing applications to figure out which MBA programs offer the best return on investment.

If you’re in the process of applying for an MBA or think that an MBA might be in your future, read on. This data tells you more than which school has the best marketing department; it shows you which MBA programs are most likely to lead to a high salary—or a future with a great salary-to-debt ratio.

What makes these rankings uniquely useful is the process SoFi uses to develop them. SoFi’s MBA rankings takes the graduate-verified income and debt reported by SoFi applicants to get a high-level look at the financial realities of MBA graduates.

This data allows us to see which programs are setting graduates up for financial success—and which programs are leaving students with greater debt-to-income ratios. We compiled over 60,000 student loan refinancing applications from a three year period from January 2014 to December 2017 to help understand the return you can get when you invest in a business school degree. 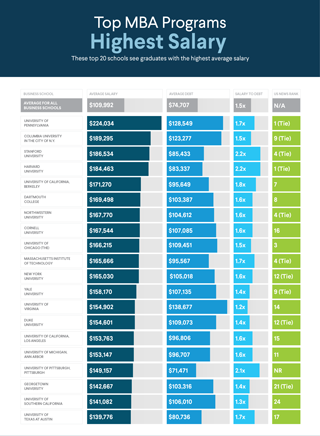 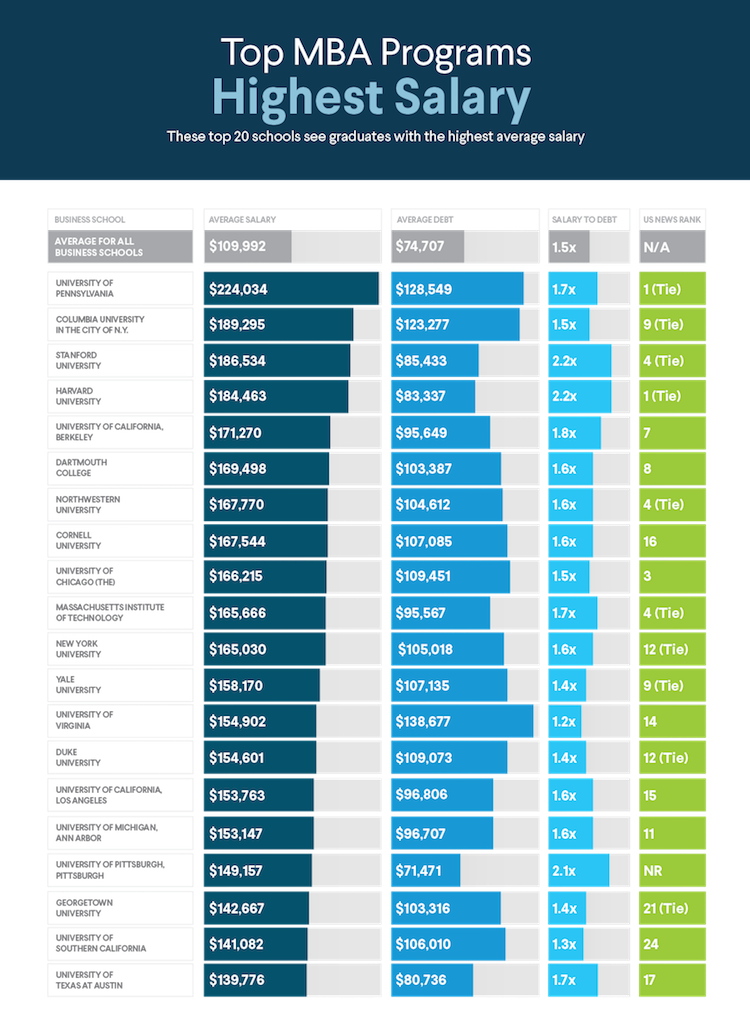 Columbia took the top spot for highest salary in 2017, but this year Wharton jumped into the number one slot, with a remarkable average gross income of $224,034. Columbia dipped to second place, and Stanford stayed steady at third. The lowest ranked Ivy league school, Yale,  which came in last year at a solid number 13, continued to move up to number 12 this year, with an average gross income of $158,170. This continued concentration of Ivy League schools in the list of top earners is no coincidence: name-recognition and long-established programs make these ideal schools for students focused on pulling in big bucks. One surprise for 2018 is the University of Pittsburgh, which ranked 18th this year after not making it into our top 20 in 2017.

Name recognition is not the only factor in earning, however. All top 10 programs are located in large cities that are home to some of the biggest national and international companies, including New York City, Chicago, and Boston. The Bay Area is represented by Stanford and Berkeley, which both boast strong post-grad incomes. Metro areas give students access to valuable networking and job opportunities that may not be available to students at smaller regional schools, and that can translate into a major financial leg up.

Unlike last year, our list for top-earners for 2018 looks a little different than the U.S. News & World Report Best Grad Schools list, which has Harvard and UPenn tied for first place. This just goes to show that there are other considerations besides post-grad salary that go into choosing the best school for you—such as, for example, the salary-to-debt ratio. 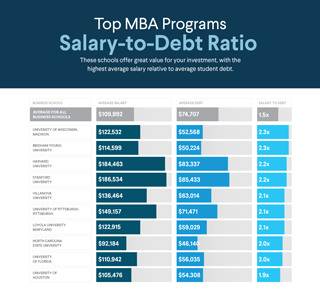 Striving for the highest salary is great, but if you’re also saddled with a ton of student loan debt, your seemingly-grand paycheck can shrink in an instant. That’s why it is important to consider schools that consistently provide grads with a great salary-to-debt ratio. This means that students are making high incomes in comparison to their student loan load.

This list contains some smaller regional schools and some great programs to look at if you’re concerned with maximizing the overall value of your MBA. University of Wisconsin-Madison jumped from fourth place for 2017 into first for 2018, with an impressive 2.33 salary-to-debt ratio ratio. This dropped BYU to second place, with a respectable 2.28 salary-to-debt ratio. Surprisingly, Harvard rounded out the top three with a 2.21 salary-to-debt ratio. This is a big change from last year, when Harvard did not even manage to break into the top ten.

One commonality among some of the smaller schools that made this list of best picks is lower initial tuition. For example University of Wisconsin-Madison hits the number one salary-to-debt ratio spot partially because this school has a lower cost for tuition. UW-Madison students have to pay $17,452 resident tuition or $35,316 nonresident tuition per year, as opposed to another top pick, Stanford, which may earn graduates an impressive average of $186,533, but costs a pretty penny at $68,868 in tuition per year.

A great salary-to-debt ratio means that students from these schools are not overwhelmed by their debt, and are maximizing their return on education. 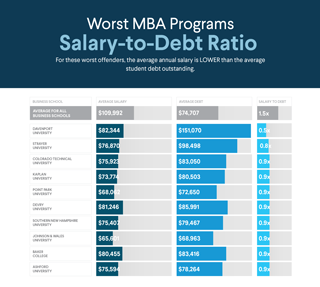 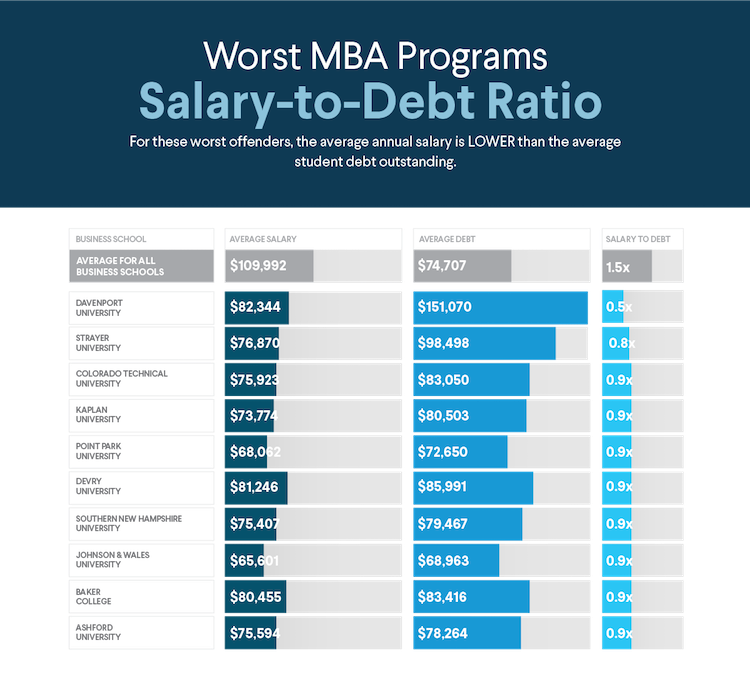 On the flip side of the coin, we have the unfortunate task of listing which MBA programs are likely to lead to unsustainable debt and low post-grad salaries. As was the case last year, private for-profit colleges lead the pack on worst return on education. In fact, five of the MBA programs that give graduates the worst return on education are private for-profit institutions: Strayer University, Colorado Technical University, Kaplan University, DeVry University, and Ashford University. In contrast, not a single for-profit college makes our list of top-earning or best salary-to-debt ratio MBA programs. These programs come with high debt loads and lower incomes compared to other MBA schools, with no programs producing average salaries over $83,000.

The five non-profit schools on the list also suffer from low incomes and high debt rates, including Davenport University, which has the dubious honor of least lucrative MBA program with an salary-to-debt ratio of .54. These programs may offer easier entrance requirements, but graduates average lower salaries and higher debt, so buyer beware.

Of course, no decision is as easy as picking a top program and waiting for the dough to roll in. Remember to research in-demand programs, initial costs, and courses offered to find an MBA program that fits your needs. Don’t be swayed by swanky marketing alone—take the time to figure out which program is best for you, including analyzing these rankings on each school’s return on education.

If you’re still paying off your MBA, SoFi may be able to offer you a lower rate on your loans.
Find My Rate

Colleges and universities shown do not endorse, promote or recommend SoFi loan products.

SoFi Lending Corp. or an affiliate is licensed by the Department of Financial Protection and Innovation under the California Financing Law, license number 6054612.

The information and analysis provided through hyperlinks to third party websites, while believed to be accurate, cannot be guaranteed by SoFi. Links are provided for informational purposes and should not be viewed as an endorsement.
Notice: SoFi refinance loans are private loans and do not have the same repayment options that the federal loan program offers such as Income Based Repayment or Income Contingent Repayment or PAYE. SoFi always recommends that you consult a qualified financial advisor to discuss what is best for your unique situation.