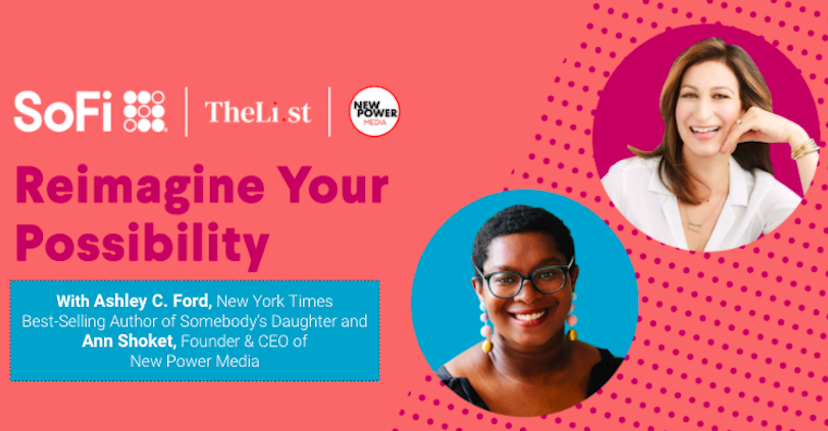 Reimagine Your Possibility With Ashley Ford

In “Somebody’s Daughter,” Ashley C. Ford explores powerful memories of coming of age in Indiana and how they shaped who she has become.

In partnership with SoFi, the bestselling author and New Power Media CEO Ann Shoket discussed the power of reimagining self and opportunity. The duo touched on growing up as a “weirdo” and the power of believing you’re worthy.

Check out a summary of the dialogue between Shoket and Ford.

‘Just by Existing, You Are Worthy’

“When did you realize you deserved success?” Shoket asked Ford.

Even as success came to Ford, she didn’t feel deserving of it for a long time. The realization that worthiness was at the root of her thinking transformed Ford’s mindset.

It’s not about whether you’ve worked hard enough to deserve something, she said.

“Just by existing, you are worthy of the best this world has to offer,” the writer said. Instead of questioning success or if someone deserves something, they can embrace the opportunity.

But, Ford admitted, things get complicated when the subject is success.

It’s up to each person, Ford explained, to figure out what denotes “success.” That takes work, self-reflection, and probably some therapy, she said.

It’s all about understanding what success means to the individual and finding a way to work toward it.

“For me, success looks like waking up and doing more things I want to do than things I don’t want to do,” Ford reasoned.

Shoket asked Ford one of her favorite questions: “When you were 16 years old, what did you imagine your life now would be like?”

Ford envisioned being an actor in Chicago.

“That was the biggest city I could fathom,” said Ford, whose upbringing in Fort Wayne created some limiting ideas about who she could become (though she remains fond of the city, and returned there for her wedding).

Shoket agreed. “The most successful woman in my town was a real estate agent,” which felt like her only example early in life.

“So how did you learn to dream bigger?” Shoket asked.

The process was counterintuitive.

“I have the ability to weave catastrophe in my mind,” Ford said. “Nobody does it better than me.”

She noticed that she shut down ideas, opportunities, and possibilities because she wanted to save herself from disappointment. If she didn’t want something so badly, she couldn’t be disappointed when it didn’t come to her.

Eventually, “I realized that I cannot disappoint myself just to keep myself from being disappointed,” she said.
Then it occurred to her that if she could spectacularly imagine how poorly things could go, couldn’t she use that skill to imagine how great things could be as well?

People Who Root for You

Shoket wondered how success may have changed Ford’s relationships after the release and positive reception of “Somebody’s Daughter,” in which the author describes growing up with a short-fused mother and a father in prison, and learning to love herself. A New York Times review called the memoir a “heart-wrenching yet equally witty and wondrous story of how Ford came through the fire and emerged triumphant, as her own unapologetic, Black-girl self.”

“I imagine you are having some complicated conversations over the book’s huge success,” Shoket noted.

Ford acknowledged that the topic had come up and explained that she does her best not to encourage passive-aggressive behavior in her relationships. Instead, these feelings should come to the surface, creating an opportunity to show vulnerability and connect.

But if a loved one isn’t rooting for your success, it may be time to take a second look at the relationship.

“I can’t imagine why I would have a person in my life who needs me to be less than I am so they can feel good about themselves,” Ford explained. That jealousy or anger isn’t about your success, she continued.

“That’s not about me. That’s about them needing to work on themselves.”

Reimagining your possibility has as much to do with examining internal limiting beliefs as external relationships and pressures, author Ashley C. Ford says. Retooling the way we see ourselves is a practice, and we hold the answers to some of our biggest questions, says Ford, who advises to never forget that you are worthy.

Looking for more ways to reimagine your possibility? Check out these additional talks:

•  Recharge Your Life with CEO and media personality Stacy London

•  Reset Your Career with Lindsey Pollak

And look into what’s possible with SoFi, which provides access to benefits that help members with their money, community, and career, all at no cost.