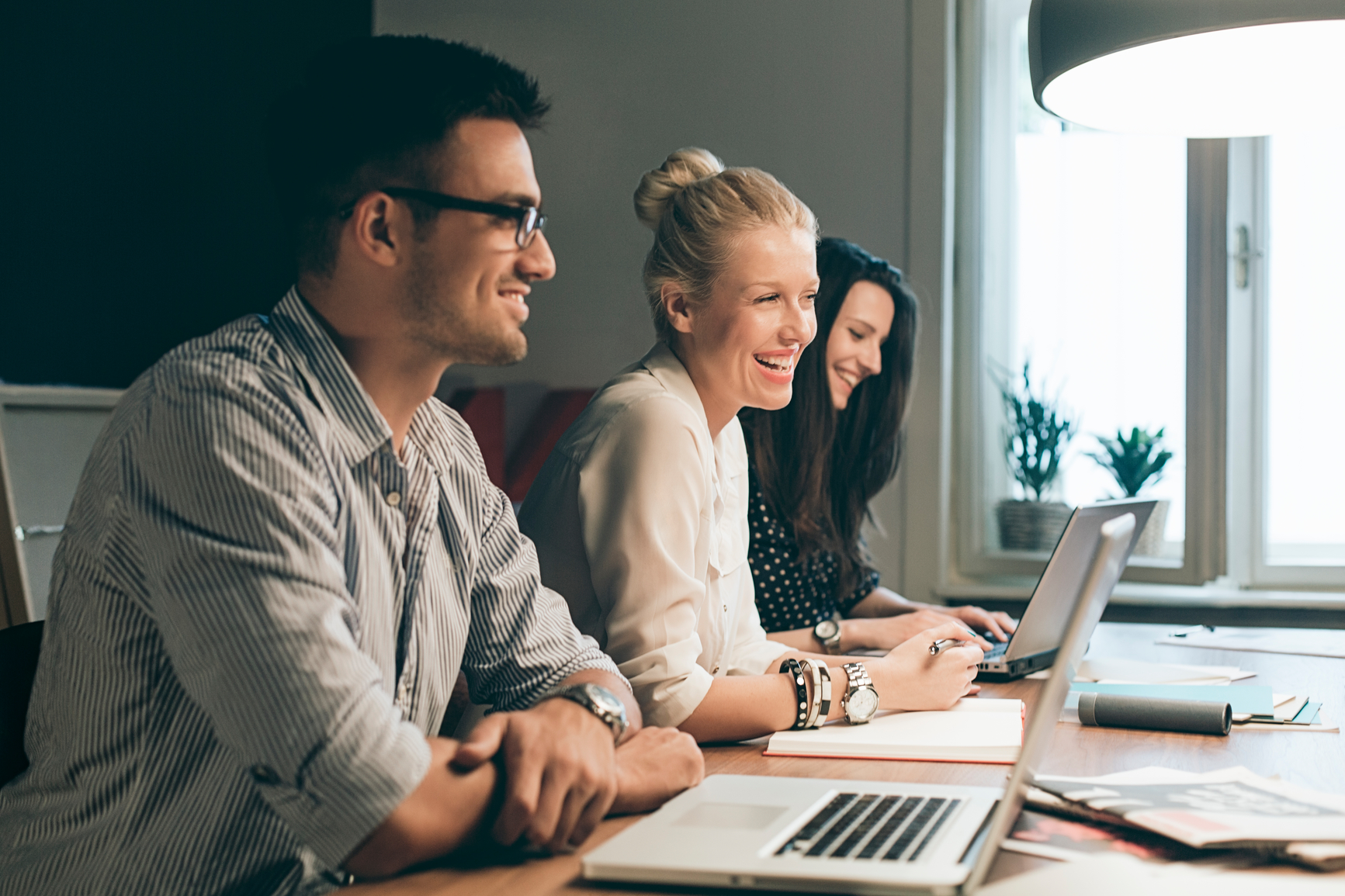 Data insights provided by the Analytics Team at SoFi

But here’s what’s interesting: Despite the fact that women have as much student debt and make less money than men, women in the SoFi data set pay their debt off more quickly than men—by nearly 10% (9.3% exactly).

This finding is not only surprising—it appears counterintuitive to a study released earlier this year by the American Association of University Women (AAUW), which found that women take two years longer on average than men to pay off their debt, thanks to the gender pay gap.

Their initial points about how women are graduating with more degrees than men, that women carry more student debt on average than men, and that women are underpaid compared to men prove to be true in our own data set as well (which will be illustrated below). But as for the conclusion, our data told a different story.

One big, important caveat of this analysis—and what makes it different from the AAUW study—is that SoFi sees the results of paying off refinanced—that is, student loan debt is often consolidated and/or refinanced with a private lender to lower interest rates, which might enable professionals to pay their debt off sooner. According to our data, women who refinance their student debt pay their debt off sooner than men who have also refinanced their student debt.

Why? One thought is that reduced interest rates might empower women to push themselves to pay their debt off sooner—the lower interest rates let them see the light at the end of the tunnel, so to speak. But that doesn’t explain why the same effect isn’t true for men, since, well—in our data set, men have also refinanced their student loans and are presumably receiving the same or similar reduced interest rates, so they should in theory feel that same push to pay their debt off quickly.

To explore this further, let’s take a look at how this shakes out in SoFi’s data set, of which 45% are women and 55% are men…

Women are graduating with more degrees than men. 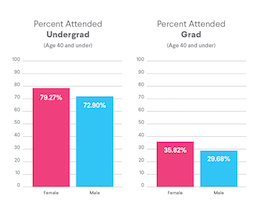 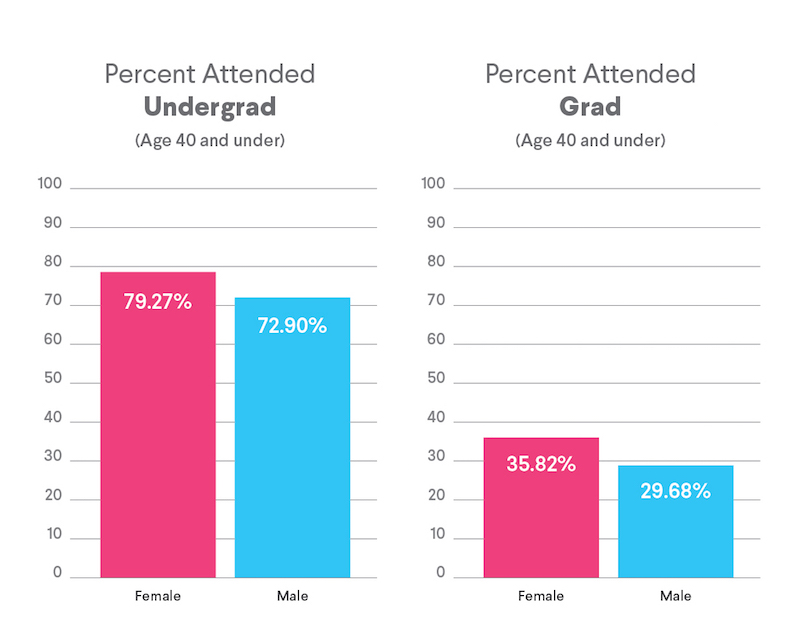 Methodology: Attendance percentages are based on sample of approximately 2.5 million SoFi application. Education credentials, including institutions and degrees are elective and are provided by our customers  during the application process. This data has been collected since 2014, which is the date credit is pulled for an applicant.

This is a trend that has been confirmed elsewhere. In addition to the aforementioned American Association of University Women study, according to a report released by the Council of Graduate Schools and the Graduate Record Examinations (GRE) Board, as of 2016, women were earning almost two-thirds of graduate degrees and half of the masters’ and doctorates at the schools surveyed. 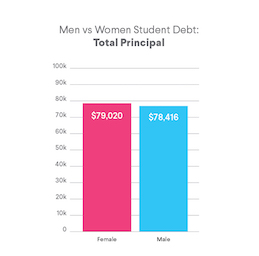 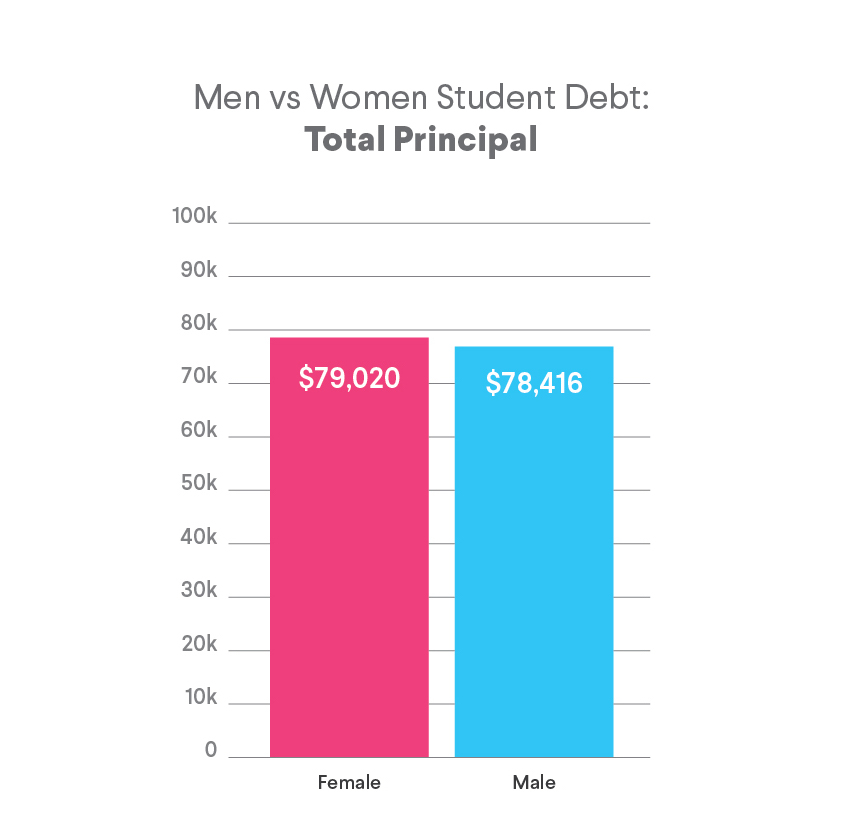 Methodology: Total Student Loan amounts are based on customers’ loans with SoFi and not with any other institutions, bureaus or agencies. Total Principal is the maximum principal during the life of a loan and is usually, but not always, the first month that the student loan status is in repayment. Sample size is approximately 26,000 loans that are fully paid off.

In our data set, women tend to have slightly higher debt when averaged across undergrad and grad degrees of all types, with women coming in at about $600 more ($604 exactly).

It is worth noting that SoFi receives student loan information only once someone applies to refinance, meaning they may have spent several years repaying their debt and potentially changing their financial circumstances (getting a higher paying job, etc.) before qualifying for refinancing. The average SoFi applicant is 8 years out of school before they apply.

The gender pay gap (outlined below) could be one reason why women have slightly higher debt loads even after they’ve spent a few years earning money and paying down their debt.

Women are underpaid compared to men. 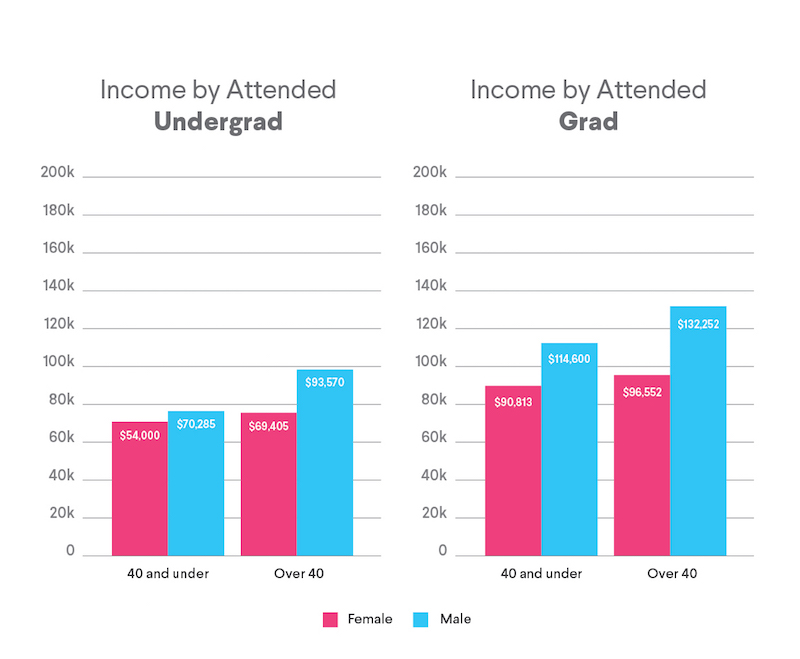 Yes—the gender pay gap is true in our data set, too. If we break each education bucket out by below and above the age of 40, we see that the gap remains consistent over time. Even with more initiatives to bring awareness to gender pay discrimination like Equal Pay Day, not much seems to have changed over the past few decades. 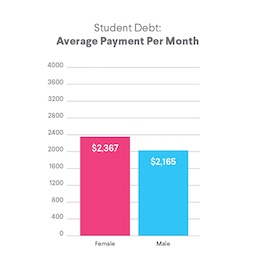 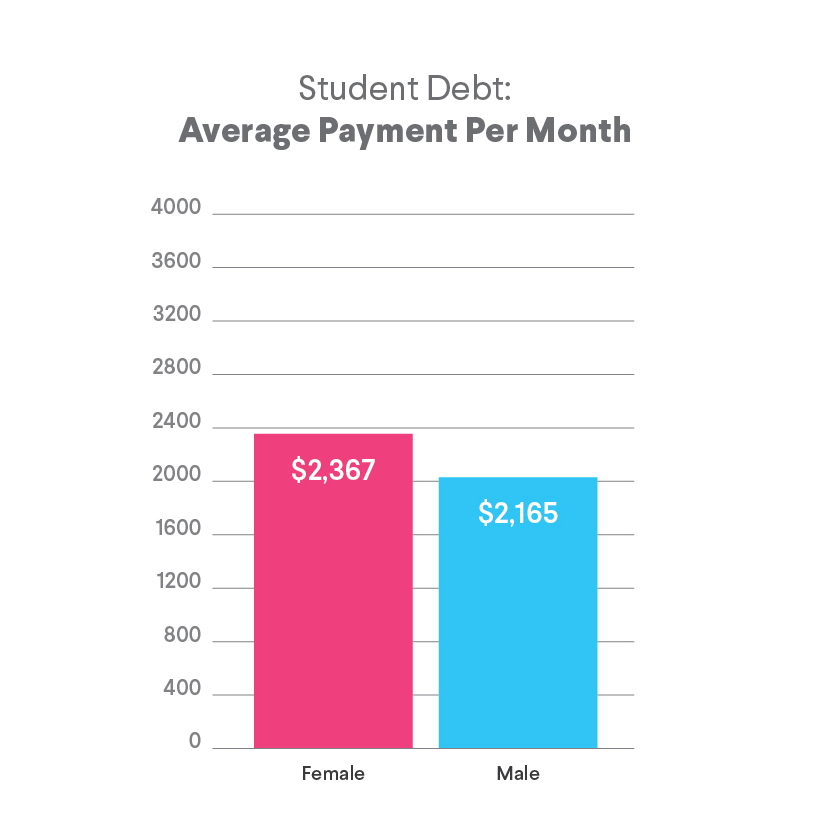 Methodology: Total Student Loan payments are based on customers’ loans with SoFi and not with any other institutions, bureaus or agencies.

Even though we know and can see in the numbers that they make less by comparison and thus have less capital to work with, women in the SoFi data set pay $202 more a month on average on their student loans. This 9.3% difference amounts to women paying off their student loans nearly 4 months ahead of men. 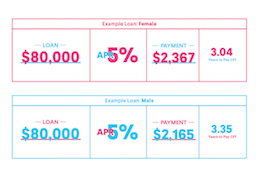 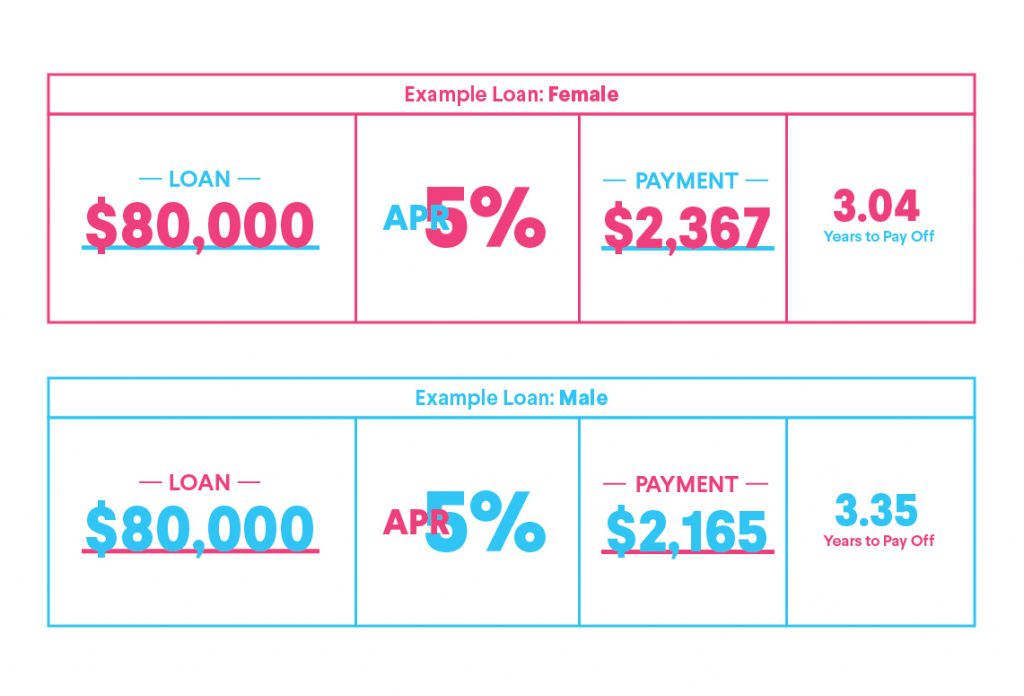 Methodology: Total Student Loan amount and payments are based on customers’ loans with SoFi and not with any other institutions, bureaus or agencies. Total Principal is the maximum principal during the life of a loan and is usually, but not always, the first month that the student loan status is in repayment. Payment is the average payment amount during the life of the loan. Sample Size is approximately 26,000 SoFi loans that have been fully paid off.

What could be the reason for this? It might be that men aren’t paying off debt more quickly because, in general, they’re more comfortable with the risk of keeping debt around a little longer than women are. A study conducted at the Harvard Kennedy school suggests that women are less likely to take risks with their money if it threatens their financial security. That could mean they prioritize eliminating student loan debt more than men, because it’s the riskiest portion of their financial life.

As anecdotal evidence, a female SoFi member who has paid off her debt seems to confirm this theory. SoFi member Diana Nguyen told us, “A possible reason why women have paid their loans four months faster than men is that women are striving to be financially independent as soon as possible. With this gained independence,  women may feel empowered to pursue a number of aspirations that may not earn as much money.”

Alternatively, in spite of multiple challenges presented to them via large student debt loads and lower compensation overall, women who take charge of their student debt by refinancing could also be the kind of women who are determined to come out ahead and reach a level playing field sooner. According to our student loan refinancing data, they do—at least in terms of eliminating debt.

* SoFi does not collect information on applicants’ gender. Gender classifications are part of SoFi’s proprietary machine learning model that predicts demographic information. The objective is to better understand our customers’ financial journey, anticipate their potential needs, and better serve our customers.