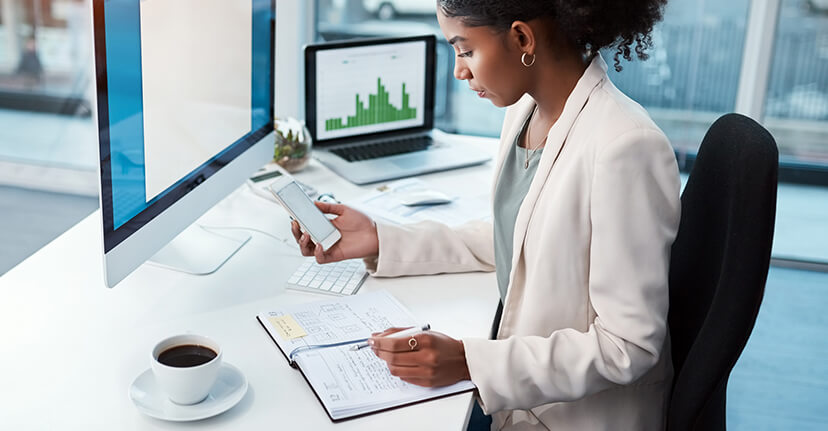 Maybe you’ve seen it in an old movie: A harried office worker watches as a paper scroll comes out of a ticking machine. They’re usually either worried or very excited. Ok, maybe you’re not watching movies that old. Maybe you’ve seen the footage of the old stock floor with pits of seemingly angry people yelling at each other, “Buy! Sell! Buy! Sell!”

You might even know of Gordon Gekko , the famous movie investor played by Michael Douglas, who, for some reason, brought the world blue shirts with white collars. Maybe you’ve seen the end of “Trading Places ” and still can’t figure out what happened.

No matter how you’ve run into the old tropes about aggressive investors screaming into a hulking mobile phone, doing a lot of stuff in person, you’re probably at least a little aware that the modern investor has evolved from the heyday of a Wall Street archetype.

Heck, they’ve probably even moved on from when your grandparents bought paper stock in a company they liked and your parents were really big on soda and theme parks and entertainment companies.

That method of yelling a bunch and trading stocks on a floor, the one you’ve maybe seen in an old movie, has a name. It’s called “open outcry.” It used to be the way stocks were traded, before computers came along. Now computers do the bulk of the trading on the New York Stock Exchange, Nasdaq, and other exchanges. At least one estimate puts the volume of trading done by computers at 80% of the daily stock trading volume in the United States.

And the computers, well they’re not doing the old-fashioned thing of picking one stock and buying it or selling it.
The global head of quantitative and derivatives research at JPMorgan estimated in 2017 that just 10% of trading was what you could consider traditional stock picking. He said, “Passive and quantitative investing accounts for about 60%, more than double the share a decade ago.”

Quantitative investing is when complex algorithms are used to find opportunities. Passive investing can include things like index funds that track a whole index, like the S&P 500 or a particular industry, and don’t have an active fund manager.

Index funds themselves can be a feature of the modern investor. The first index fund was launched by the Vanguard Group in 1976. They were originally scoffed at by fund managers and stock pickers who thought they knew how to pick winners. The modern investor seems to have taken a liking to index funds, however, and investors put $206.5 billion into them in 2018 alone.

What Are Modern Investors Saving For?

Down payments on a home seem to be of particular concern for millennials . About 90% of those who are currently renting say they want to own a home, but just 11% have saved $10,000 or more to put toward a home.

Almost 50% of renters in this age group have nothing saved for a home, though most say they’d be able to make payments on a mortgage but the down payment is a key stumbling block toward making the purchase.

There is some evidence that even shorter-term goals are important to modern, perhaps younger, investors. One survey found that millennials are more interested in taking advantage of rewarding experiences now, rather than in retirement, which was the approach favored by many baby boomers.

The same study found that “81% of this young generation are more likely to spend their cash on travel, 65% on dining, and 55% on fitness instead of saving for the long-term.”

Which isn’t to say that retirement isn’t important to modern investors. In fact, millennials saw the average retirement account balloon from $9,000 in 2007 to $36,000 in 2017 . That’s an almost 400% increase after the great recession that outpaced gains made by baby boomers and Gen Xers across the same time period.

Modern Investors Can Invest in Tech and Causes

Long gone are the days when an investor might own a few stocks, have a savings account, perhaps a bond or two, and maybe a certificate of deposit. Sure, those things still exist and people are investing in them, but the modern investor can use interesting new technology to invest, and they can invest in causes they care about.

Cryptocurrencies didn’t exist when the traditional investor was waving paper around and yelling across a room at the stock exchange in New York City. Now there’s almost $100 billion invested in Bitcoin and some of the other popular cryptocurrencies.

Then there’s the growing number of index funds that can help the modern investor make sure their money is going to causes they support. Want to invest in companies with good gender diversity? You can.

Want to buy an index fund made up of stocks from companies committed to lowering their carbon footprint and caring for the environment? You can.

The Modern Investor Can Get Started With Less

Access just might be the name of the game when it comes to the modern investor. Today, you can get started in a low- or no-cost exchange-traded fund (ETF) with just a few dollars.

You don’t have to save up enough money to buy one share of that huge corporation you’ve had your eye on. For just a couple bucks you can start investing in that company’s entire industry.

The modern investor has so many more tools than the traditional investor. And they have a whole bunch of different and easier ways to access investment vehicles that can be tailored to their long- or short-term goals.

It may be a cliche for a little while longer that the stock market looks like a cacophony of folks yelling at each other in shirts with contrasting collars, but the modern investor probably knows the reality that now investing can be done on their terms and tailored to their individual needs.

Ready to explore SoFi Invest®? See how fractional shares might fit with your long-term goals.

During market hours, fractional orders will be routed to the market immediately. Outside of market hours orders will be aggregated and executed in the morning trade window of the next business day when the market opens. Orders are sent in the order received. There may be system delays from receipt of your order until execution. Market conditions may adversely impact execution prices.
Crypto: Bitcoin and other cryptocurrencies aren’t endorsed or guaranteed by any government, are volatile, and involve a high degree of risk. Consumer protection and securities laws don’t regulate cryptocurrencies to the same degree as traditional brokerage and investment products. Research and knowledge are essential prerequisites before engaging with any cryptocurrency. US regulators, including FINRA , the SEC , and the CFPB , have issued public advisories concerning digital asset risk. Cryptocurrency purchases should not be made with funds drawn from financial products including student loans, personal loans, mortgage refinancing, savings, retirement funds or traditional investments.
SoFi Invest®
The information provided is not meant to provide investment or financial advice. Investment decisions should be based on an individual’s specific financial needs, goals and risk profile. SoFi can’t guarantee future financial performance. Advisory services offered through SoFi Wealth, LLC. SoFi Securities, LLC, member FINRA / SIPC .
External Websites: The information and analysis provided through hyperlinks to third-party websites, while believed to be accurate, cannot be guaranteed by SoFi. Links are provided for informational purposes and should not be viewed as an endorsement.