As the 2016 presidential hopefuls announce their plans to deal with student loan debt, student loan refinancing is once again at the center of the education debt debate. The media coverage thus far has made a couple of things pretty clear. First, a lot of people are unaware that they can apply to refinance federal student loans through a number of private lenders right now – no legislation required.

Second, this is a good discussion to be having, and borrowers – particularly those with grad school or professional school debt issued prior to 2013 – should be paying attention. Why? Because when you look at federal student loan interest rates between 2008 and 2012, this population got the short end of the stick.

Consider this: if you took out a home loan in 2006, you could have applied to refinance that loan in 2012 at about half the original interest rate. If you took out a Grad PLUS loan in 2006, you did not have that opportunity – despite the fact that pretty much every other interest rate out there dropped to record lows during that timeframe (see below). Essentially, responsible homeowners could take advantage of declining rates, while responsible student loan borrowers could not. 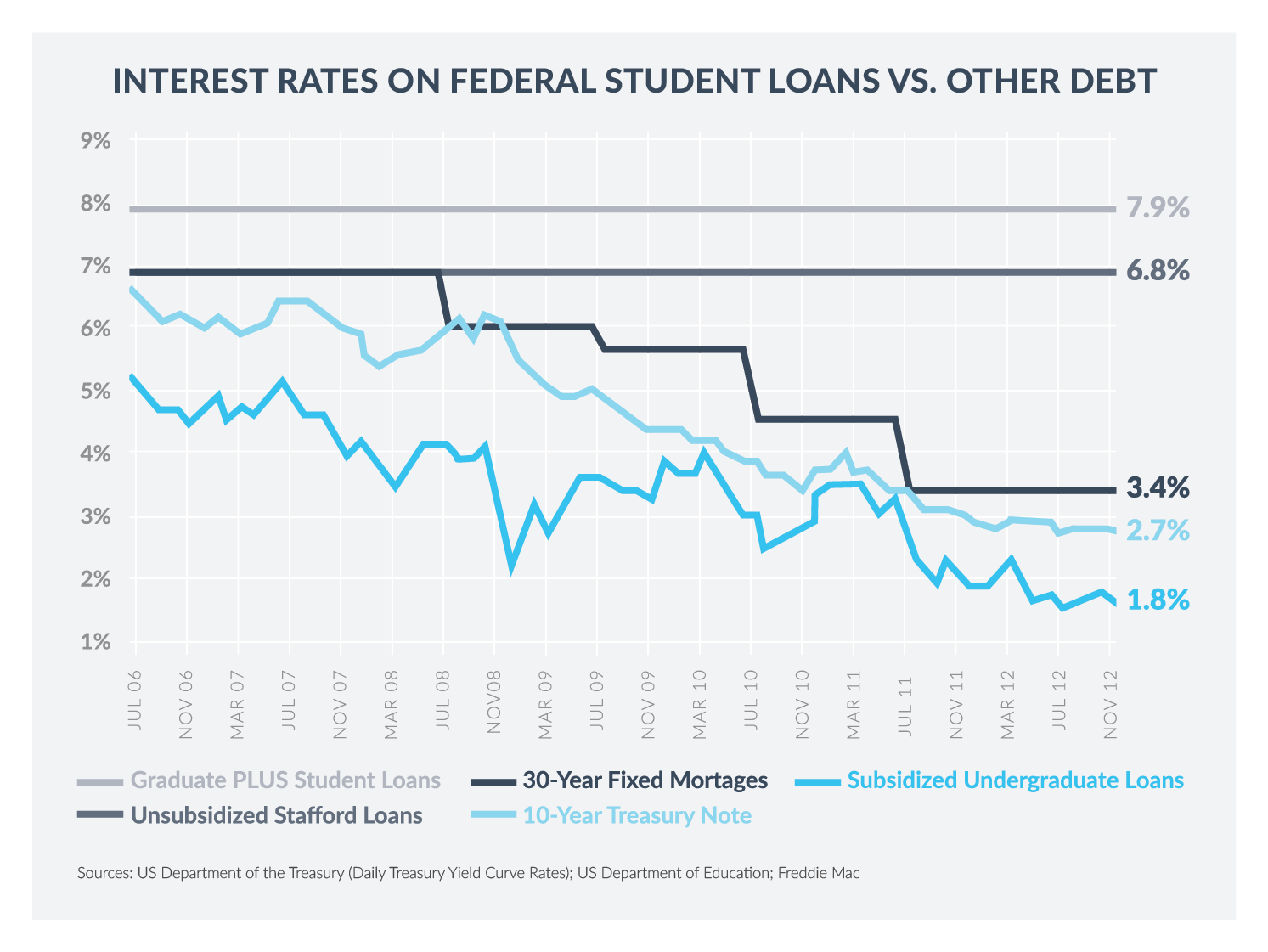 During this same timeframe, the amount of student loan debt for graduate and professional degrees was steadily and stealthily increasing.  Between 2004 and 2012, the typical debt load of a graduate borrower jumped an inflation-adjusted 43%, from $40,209 to $57,600.  And for those pursuing law or medical degrees, the median amount borrowed in 2012 was much higher – $140,616 and $161,772, respectively.

Since students can use Grad PLUS loans to cover the entire cost of attendance, the majority of this outstanding debt is made up of high interest rate federal student loans. Interesting in finding out more about federal student loans? Read through our Student Loan Help Center to get answers to all of your student loan related questions.

While graduate degree borrowers tend to make more money than their undergraduate counterparts, many still feel the weight of their large debt loads and high student loan interest rates.   If they’re able to refinance, the savings can be significant.  For example, a borrower with $100,000 principal and 10 year term would pay almost $45,000 in interest if they took out loans at the former Grad PLUS interest rate of 7.9%.  Refinancing at a modest 6% would save them about $12,000.

Prospective refinancers should first take note – federal student loans offer some benefits and protections that don’t transfer to private lenders, including loan deferment and forbearance (although some private lenders do offer the latter), potential loan forgiveness for public servants and teachers, and graduated, extended and income-driven repayment plans (such as Pay As You Earn, or PAYE). Before refinancing federal loans, you should check to see if any of these features apply to your situation.

However, if these benefits aren’t a fit for you, and you’re able to qualify for a lower rate, the savings can really help put a dent in your debt burden.

Editor’s Note: This is an updated version of a post we originally published in May 2014. We welcome new comments and questions below.