#HomeEnvy: How Social Media is Changing the Game for Home Improvement

It’s no secret that the advent of Instagram has changed the way we eat and the way chefs prepare food. At this point, we’re all in it for that double-tap worthy brunch shot of our elegantly-plated eggs benedict accompanied by home fries and hashtags.

Social media does more than just make us feel like we missed out on a great meal, though. Through platforms like Pinterest and Instagram, we have a clear view into friends’ and influencers’ homes. It made us wonder: does “pinning” impact planning when it comes to home improvement projects? We surveyed 1,500 homeowners to find out.

Whether it’s soliciting a recommendation for the best toaster oven on Facebook or eyeing a tile install with envy on Pinterest, our social feeds are heavily informing our home improvement choices. More than 28% of the homeowners we surveyed said they made at least one purchase for their home in the last 12 months based on what they’d seen on a friend’s social profile.

Younger homeowners especially have come to depend on social for their inspiration, and less so on traditional media than their parents. 44% of homeowners ages 25-44 turn to social networks like Pinterest and Instagram to help inform their design choices instead of home improvement shows and TV networks like HGTV, compared to only 29% of homeowners 45-55. Influencers, designers, DIY experts and the like are sharing ideas directly on social media, and consumers are gladly taking them offline.

Because these platforms are so visually inclined, it makes sense that appearances rank pretty high for homeowners considering a project. A majority of homeowners told us their primary motivator for any upcoming projects is purely cosmetic in nature, with 44% saying they’d consider taking on a project just because their home needs a little nip/tuck to better suit their style. Emergency repairs came in second, with 30% saying they’d only consider a project if something broke and they had to shell out to fix it.

Related: How to Create a Renovation Plan to Match Your Budget

Only 2% of young homeowners openly admit that what we’re calling “Home Envy” would be a primary driver for their next project, but we’re willing to bet that the influences of social media seep into remodel and decor choices more than that specific stat suggests. 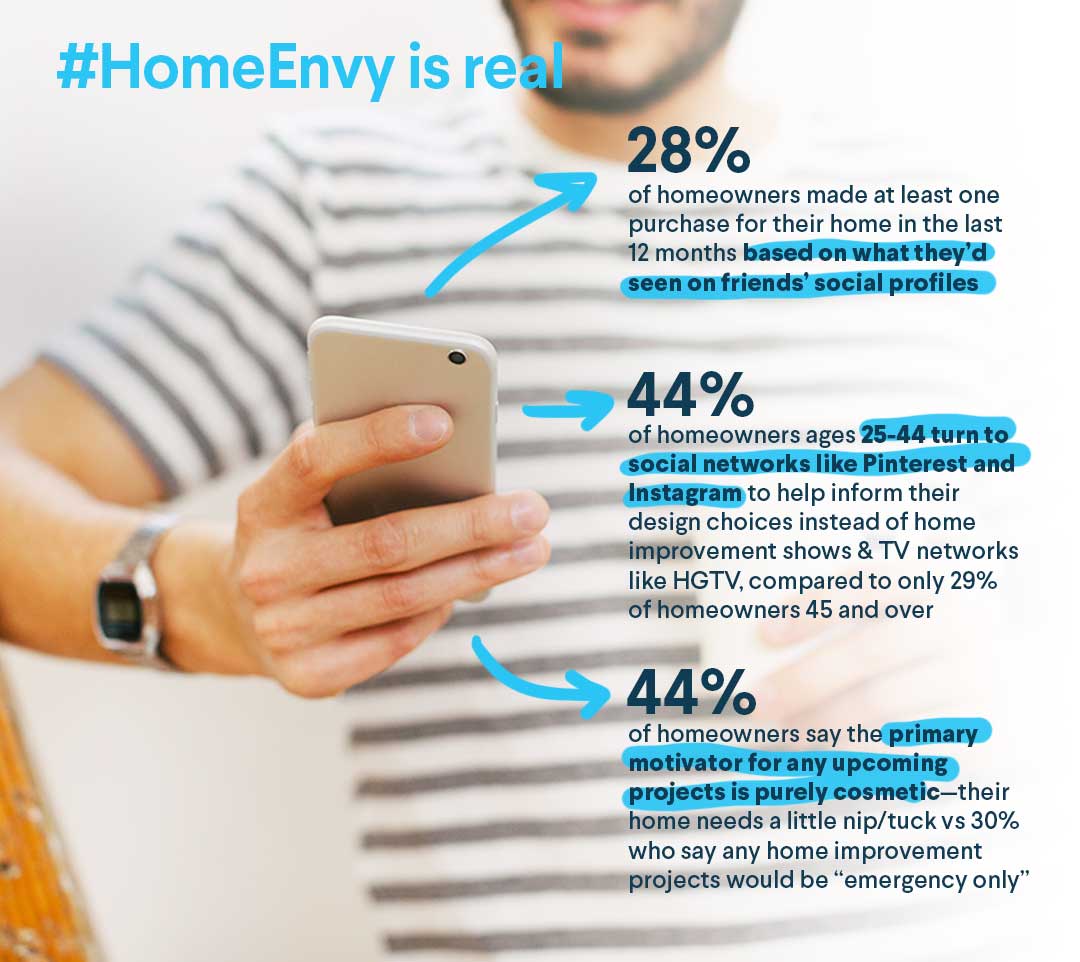 The wealth of tips and tricks available online and on social networks is giving confidence to a new generation of DIY-ers, with nearly 52% of homeowners in this group saying they’d tackle a home improvement with a 50/50 approach—anything shy of plumbing and electric, they’d do themselves rather than hire a professional, with 24% saying they’d DIY all day (unless the work requires a license or permit). 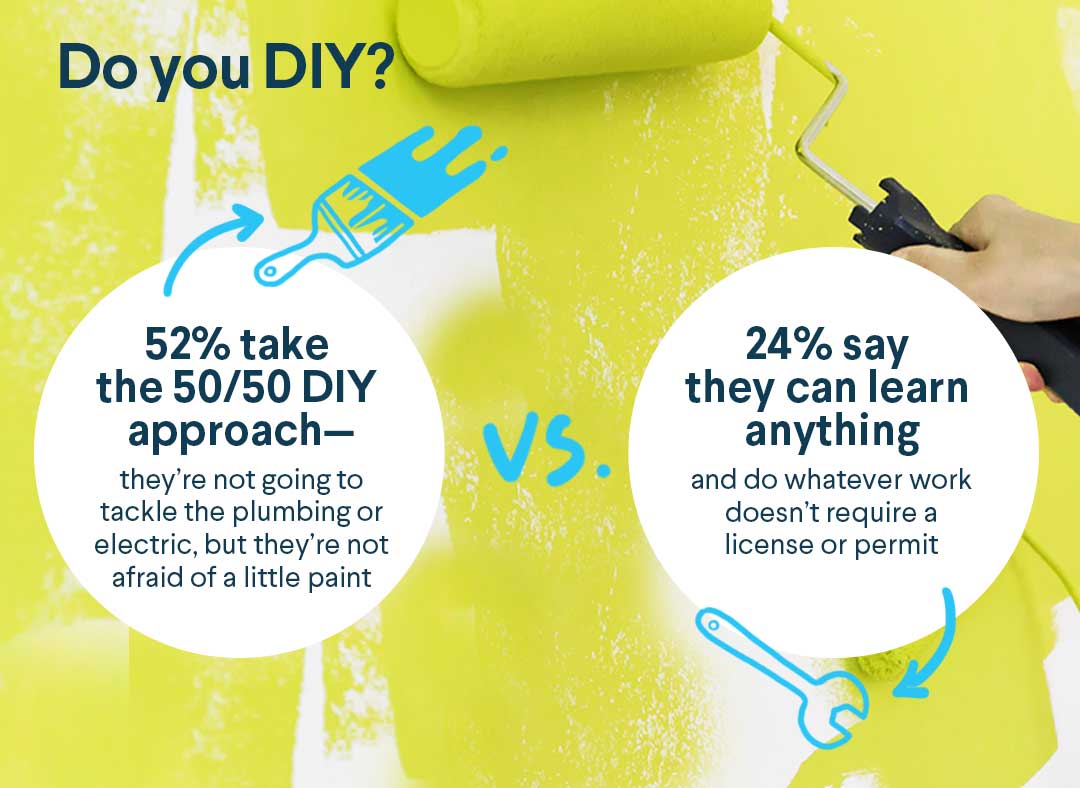 But what projects are they DIY-ing? Most are most interested in modernizing their space, with 36% saying an update to a kitchen or bath would be first on their list. Other top interests are landscaping, with 16% saying they’d update their outdoor space before anything inside, because that’s where they spend the most of their time. A study from Houzz found that even more homeowners want to focus on updating their outdoor space, with nine in 10 reporting recently completed, currently in progress or planned substantial renovations, or complete overhauls to landscaping.

Some homeowners are more environmentally concerned: 15% said their first priority is to make their home more green through energy saving updates. Lowest on the list are smart appliances. Only 3% said they feel like adding more technology to their home through things like smart appliances is their top priority. Another important consideration to think about when remodeling is what that projects ROI is. Use SoFi’s Home Project Value Estimator to find out! 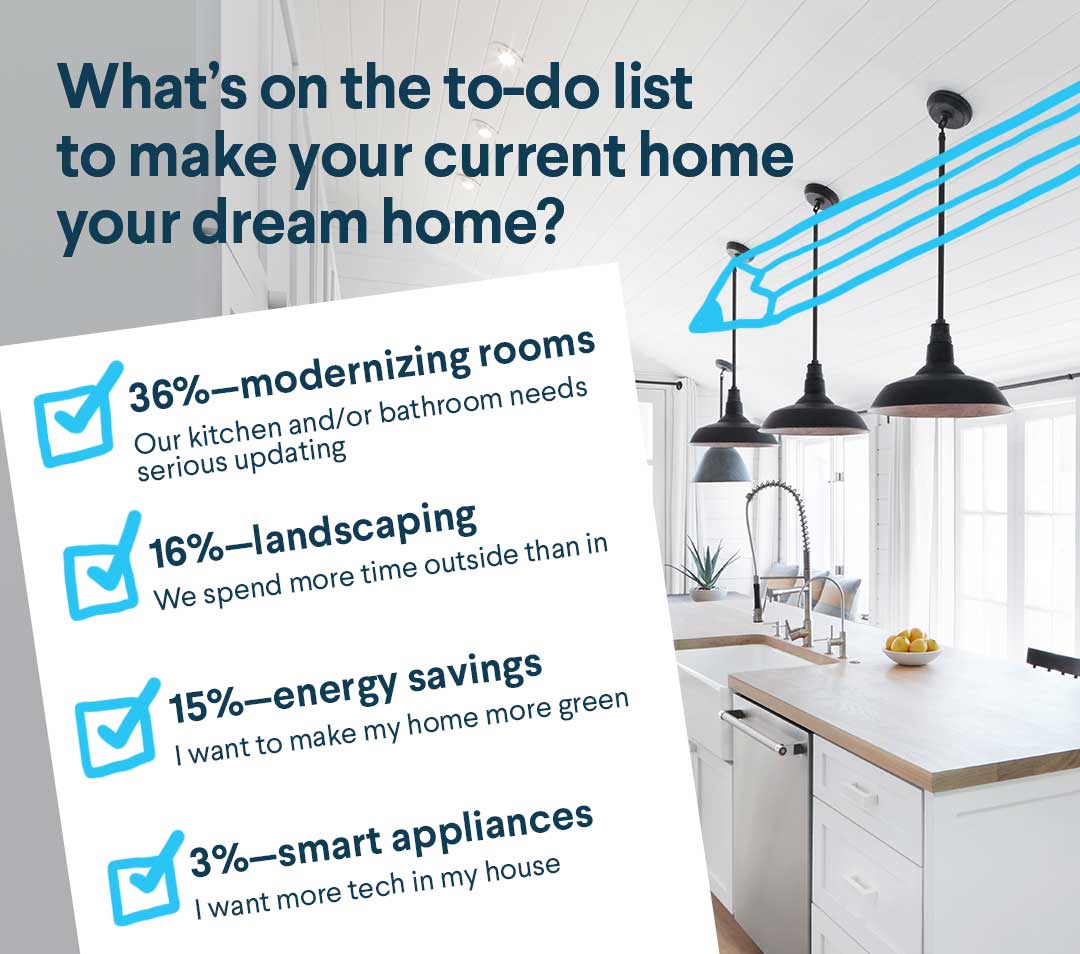 Our survey respondents are pretty financially savvy—61% said the first thing on their home improvement to-do list was to assess their finances and decide how they’re going to tackle this financially, way before they pick up a copy of Architectural Digest or a sledgehammer. (Interestingly though, 5% would take the “grab the sledgehammer first” approach, while 10% said their first action is to check Pinterest for inspiration). 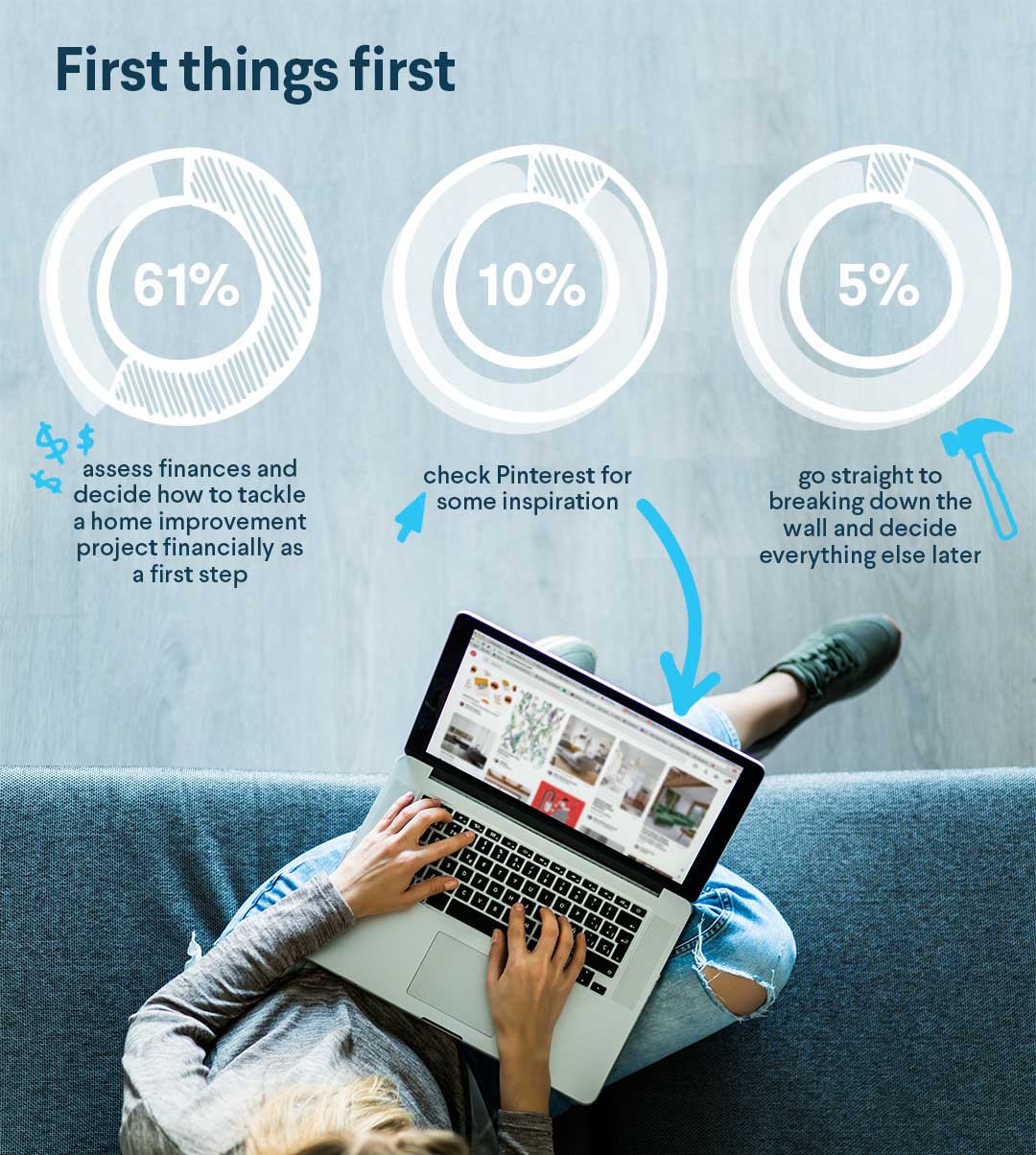 The “checking the bank account” step of the process seems to be where a lot of homeowners get stuck. 63% said money is the main reason they’re not able to take on the home improvement projects they want to, and 62% say they’ve been forced to put a project or renovation on hold due to finances. Of those who’ve had to press pause on a project for financial reasons, 33% said they later regretted not following through. To get an idea of how much your next renovation project will cost, use this Home Improvement Cost Calculator.

Where is that money being directed instead? Not a big surprise to us, since we’re intimately familiar with how much of a burden debt can be, but 43% of respondents said paying off existing debt was the biggest financial priority, followed by saving for retirement. Only 15% said that saving for a home improvement project was their top financial priority—which may explain why more than 26% said they would put a future home improvement on a credit card. Only 13% would take advantage of a low-interest-rate home improvement loan, with 57% choosing to save for a project in a dedicated savings account. 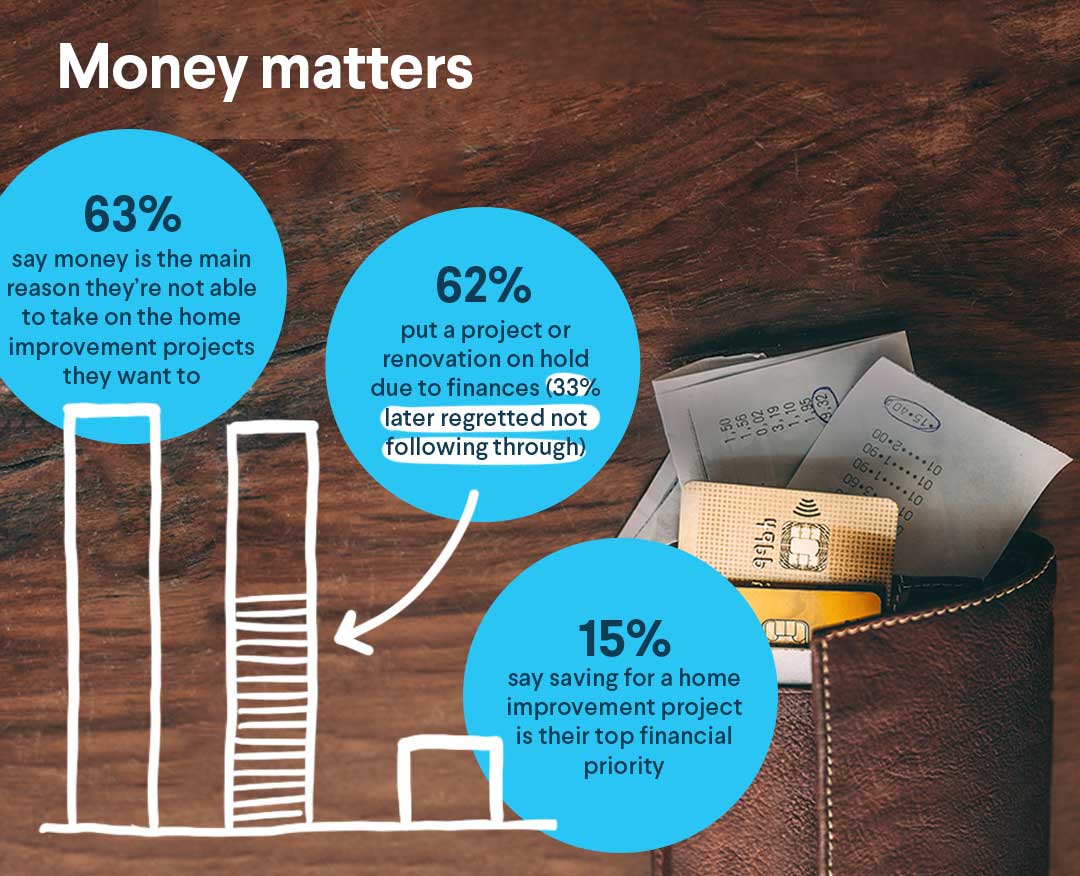 So what did we learn? The influence that social media has on how people personalize their home is growing as younger, more socially plugged-in people buy homes and make them their own through home improvement projects. The one thing that never changes: money influences how people think about taking on these projects, and their ability to do so on their terms.

If you don’t want to wait for your dream kitchen, or you already put an emergency home repair on a high-interest rate credit card, check your rate on a personal loan from SoFi today.