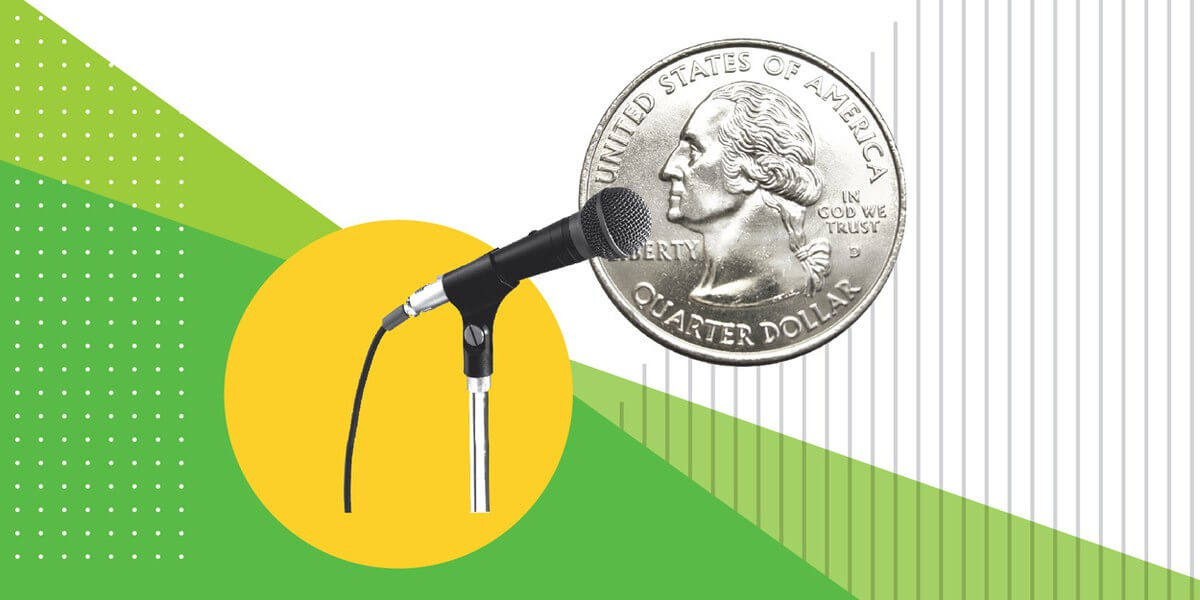 A Note on the Taper

Now that the markets are accustomed to heightened tensions with North Korea, attention is shifting back to monetary policy once again. In the aftermath of the global financial crisis, several of the world’s central banks employed extraordinary measures to help stabilize economies. Now the question is how are they going to scale back, or “taper,” those policies and what affect that will have on asset prices.

The Federal Reserve before the crisis

Since the U.S. Federal Reserve’s inception in 1913, its mandate has been to target both inflation and unemployment. Its only lever to effect change in those areas before the crisis was the Federal Funds rate. This is the overnight interest rate banks charge when they borrow money from each other. The premise of monetary policy is that changes in the Federal Funds rate will lead to predictable changes in many of the interest rates that matter for decisions made by businesses and consumers in the economy, for instance, whether to buy a home or build a factory.

This process worked effectively from 1951-2007 (before 1951, the process was a bit more complicated). We can see in the chart below that the Fed was essentially able to push the Fed Funds rate where it wanted it to go. 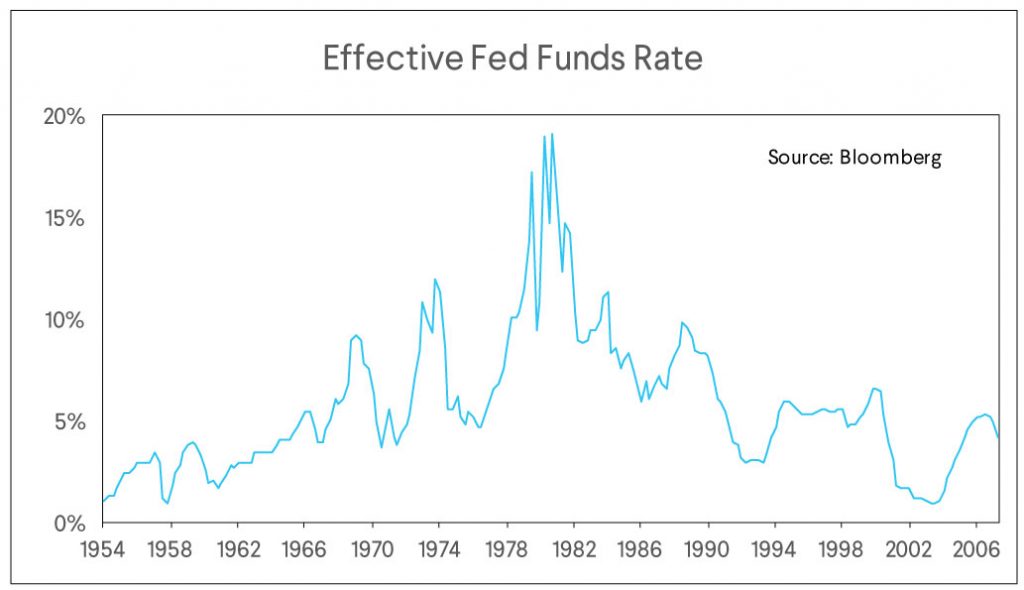 As it became clear that the housing market and the economy were slowing down going into 2008, the Fed started to lower rates quickly to try and prevent a recession. However, lowering rates wasn’t enough to keep the financial system from coming apart at the seams. One reason is that much of the lending that takes place between banks is collateralized by assets, just like a mortgage is collateralized by a house. Ironically, much of the collateral underpinning this interbank lending was comprised of mortgage-backed securities. With house prices going down, it was unclear if those mortgage-backed securities were worth anything. Libor, the interest rate at which banks lend to each other internationally, spiked up suddenly, which meant that banks had essentially stopped lending to each other (see below). Left unabated, this would have destroyed the payments system and halted commerce altogether. 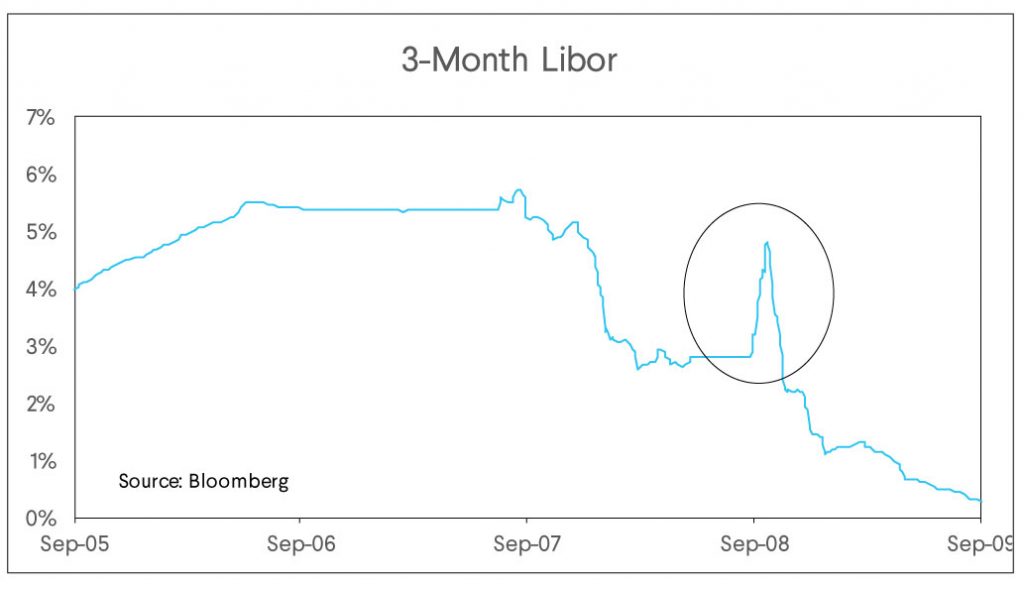 The Fed’s response to this was to become much more involved in markets than it had ever been before. It created various programs in which it would either lend money to banks against precarious collateral that other banks found too risky or it would buy assets outright, giving universally trusted bank reserves for untrusted mortgages. This essentially restarted the heart of the economy, but it was still ailing.

As the economy slowed, the Fed continued to lower interest rates, but once rates hit zero, it had few tools left. Given the then-recent effectiveness of restoring order to asset markets by buying assets, the Fed decided to try something new. It would continue to buy mortgage-backed securities which incentivized continued mortgage origination. In addition, it would buy longer dated Treasury securities in order to target the rates used in consumer and business decisions more directly. By pushing down the interest rate on longer term securities, it was hoping to prompt more activity on main street while encouraging investors to take more risks (given the less attractive risk-free rate). The effect on the Fed’s balance sheet was profound, as it grew from roughly $800 billion in assets, mostly U.S. Treasuries to over 4 trillion with a myriad of public and private securities.

It has been nearly ten years since the depths of the global financial crisis. Central bankers worldwide (the European Central Bank and the Bank of Japan followed policies similar to those of the Fed) have expressed a desire to return to a pre-crisis, conservative monetary policy. In particular, the Fed would like to shrink its balance and has decided to “taper” its purchase of assets. Rather than reinvest the cash that comes in from bonds that mature, they will essentially take the cash out of circulation.

So will this affect your portfolio? Probably not much.  The sheer size of the market for mortgage-backed securities and treasuries compared to the tapering of Fed purchases means the direct effects should be minimal. If those markets are only mildly affected, then the probability of a large effect in the equity market where the Fed does not participate is unlikely. In addition, markets will take the commencement and continuation of the taper as a sign of confidence in the economy by the Fed.

What will have a larger effect on asset prices is the Federal Funds rate. If the Fed raises that rate faster than markets expect, then risky asset prices could fall. On September 20th, the Fed caught markets by surprise by announcing that another rate hike is expected before December. While the intraday move (seen in the chart below) was only 2 basis points, or .02 of one percent, it corresponded to a 10% increase in the market’s estimated probability of a hike by year-end. After a sharp initial drop, stock prices recovered by the end of the day. However, a larger surprise could introduce substantial volatility to markets. 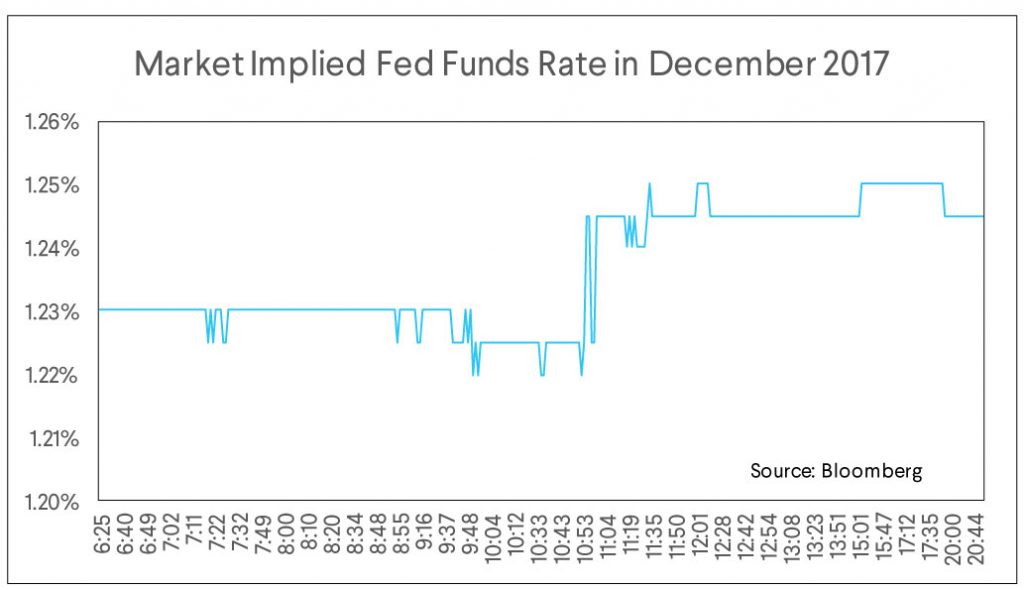 We do find it likely that the Fed will raise rates faster than the market expects. Still, we see the Fed being more hawkish than markets only in a strong economic environment that supports corporate earnings. Thus, stocks and short duration fixed income should continue to perform even against the backdrop of a hawkish Fed.

Financial Tips & Strategies: The tips provided on this website are of a general nature and do not take into account your specific objectives, financial situation, and needs. You should always consider their appropriateness given your own circumstances.