The final week of the quarter was an exciting one. Continued troubles with European banks led to volatile stock markets (more on this next week). Oil prices were sent sharply higher after a productive meeting among member countries of the Organization of Petroleum Exporting Countries (OPEC). Inflation data out of the United States continues to move towards the Fed’s target, but came in at expected levels leading to little change in the 10-year Treasury yield.

The decline in OPEC market power because of the rapid rise in U.S. oil production has been a driving factor for energy markets over the past several years. Once the price setter for the entire world, OPEC cooperation disintegrated as member countries sought to maintain market share in the face of an epic expansion in U.S. oil production (seen below.) 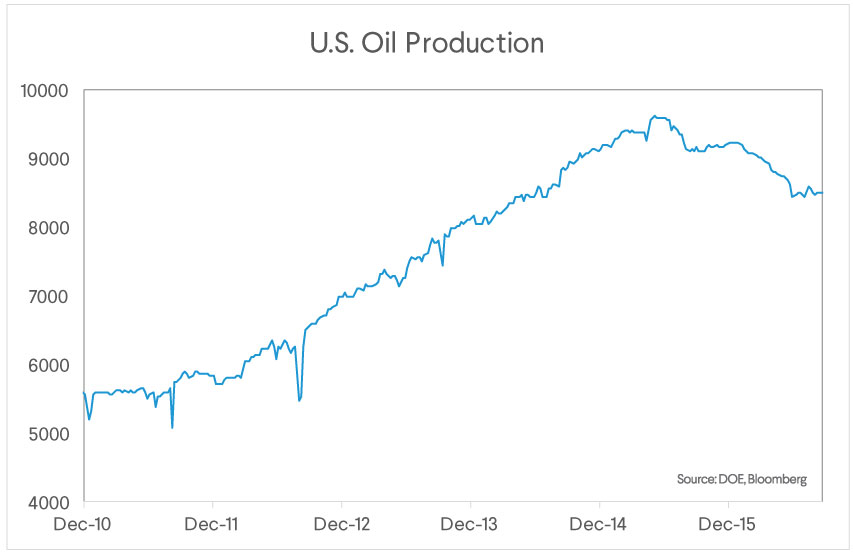 The sharp decline in oil prices over 2014 and 2015 reduced the economic viability of American production and a dramatic reduction in new investment reduced drilling capacity. OPEC cooperation has been slow to return. Market participants have expected production cuts from OPEC members in order to force prices higher, which usually works for a demand-inelastic good like oil, but these expectations have been disappointed until now.

At a meeting this week in Algiers, OPEC members reached an agreement to reduce output by up to 700,000 barrels per day. Oil prices spiked on the news and continued to increase for the rest of the week. 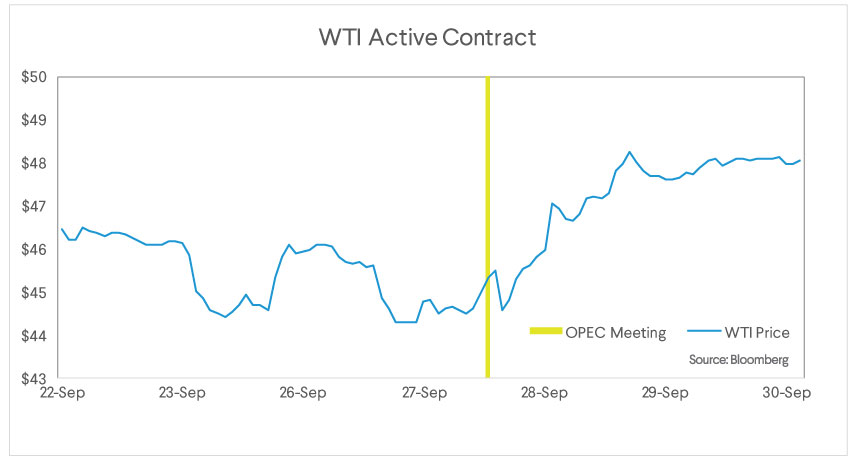 Only time will tell if OPEC members actually decrease production. After the initial agreement comes the much more difficult prospect of assigning the share of production declines to member countries. As oil nears $55-$60, new U.S. production again becomes economical. This acts as a (porous) ceiling on oil prices and reduces the benefits to cooperation for the cartel. Still, prices can rise more than another 10% before that point, and that could add to already rising consumer prices.

The Fed’s preferred measure of inflation, the PCE Price index, was released this week. The Core measure, which removes the more volatile food and energy components, is up 1.7% over the last year. This is nearing the Fed’s target of 2%. We can see in the chart below that inflation was this high in mid-late 2014, but eventually turned downward. This was caused in large part by the fall in oil prices described earlier. While the upside in oil prices is limited, they are unlikely to fall over 50% as occurred in the 2nd half of 2014. This means the continued acceleration of inflation is a real possibility. 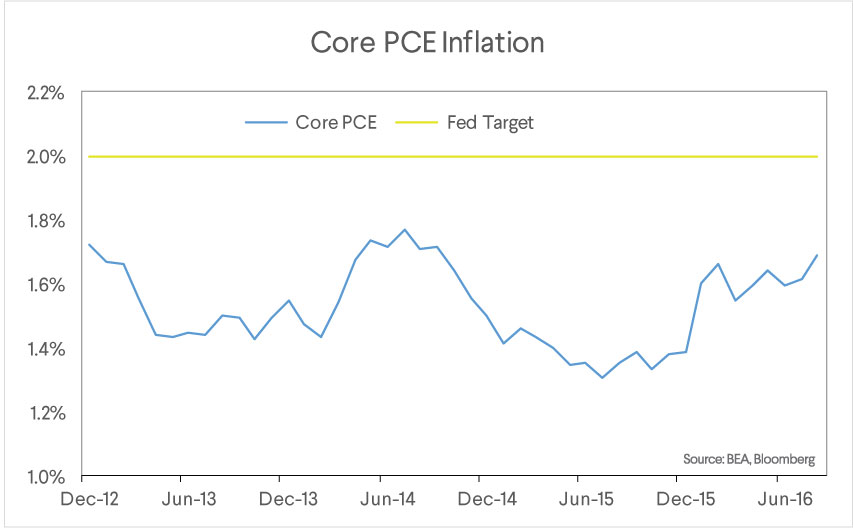 Should inflation reach or surpass the Fed’s target, the Fed will be forced to raise rates significantly faster than the market is currently expecting. This keeps us underweight long-term fixed income and is a risk factor for equities going forward as short-term bonds become more attractive. Our view however is that the boost to expectations of nominal earnings growth from continued inflation will be the more powerful factor and equities will continue to perform.