The Bureau of Economic Analysis’ advance estimate of Q3 GDP growth was 2.9%. This was significantly better than the Atlanta Fed’s GDPNow (2.1%) as well as the Bloomberg consensus forecast (2.6%). Should we take this to mean that slow-growth has ended? Unfortunately, no. Much of the “extra” growth in the third quarter was due to recovery in inventory investment and a one-off increase in exports of agricultural products. The more persistent components of GDP grew less impressively. We can see below that the largest component of GDP, personal consumption, grew significantly slower than in the second quarter. 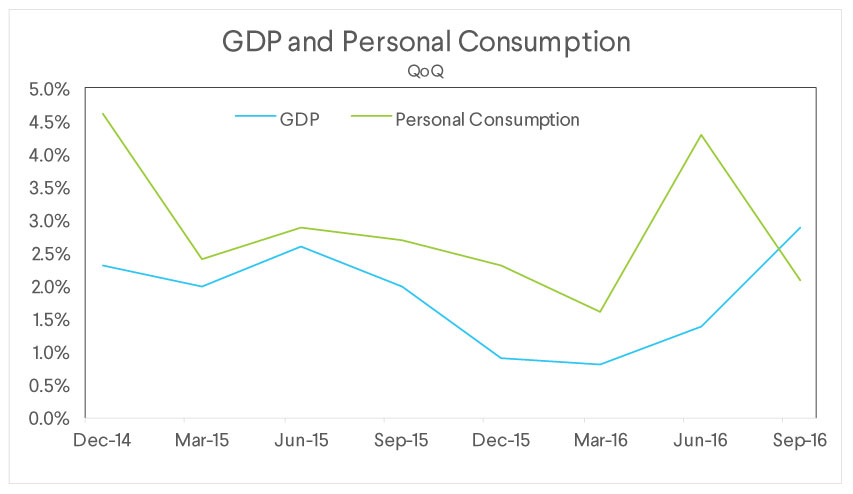 This is not to say it was a bad result for the quarter. Even without exports’ contribution to growth, Q3 GDP grew at the fastest rate since Q3 2015 and a recession looks unlikely. More recent data paints an even better picture of the American economy. The preliminary results of the Markit Purchasing Managers’ Index (PMI)1 show continued expansion in economic activity.

1. MARKIT PMI™ are widely followed indices of global business conditions derived from surveys of a large sample of purchasing managers. This data is free to all and available before GDP data. See https://www.markiteconomics.com 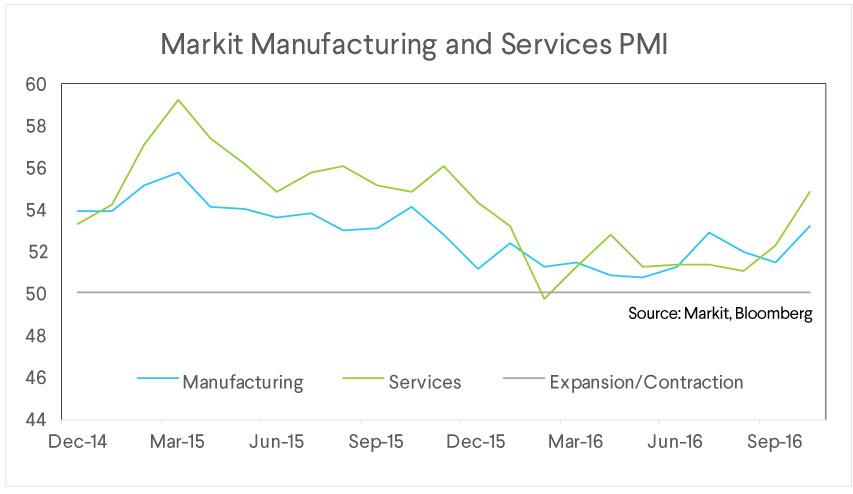 US Economic performance in the third quarter supports the Fed’s relatively optimistic outlook. Moreover, recent data also looks good. We still feel a November rate hike is unlikely so near the election, but are becoming near certain of an increase in December. A strong U.S. economy (albeit with slower growth rates than in the past) means we like U.S. equity and risk assets in general. We continue to think the major risk facing financial markets is inflation accelerating significantly and as such we avoid longer duration fixed income.

The SoFi Wealth Market Commentary does not provide individually tailored investment advice. It has been prepared without regard to the circumstances and objectives of those who receive it. We recommend that investors independently evaluate particular investments and strategies, and encourage investors to seek the advice of one of our financial advisors.

The appropriateness of an investment or strategy will depend on an investor’s circumstances and objectives. This is not an offer to buy or sell any security/instrument or to participate in any trading strategy. The value of and income from your investments may vary because of changes in interest rates, foreign exchange rates, default rates, prepayment rates, securities/instruments prices market indexes, operational or financial conditions of companies or other factors. Past performance is not a guide to future performance. Estimates of future performance are based on assumptions that may not be realized.