It was a relatively uneventful week as Fed Chair Janet Yellen and Fed Vice Chair Stanley Fischer continued to reiterate the need for a gradual path of rate hikes. Inflation data came roughly in-line with forecasts, which kept ten-year inflation expectations at their highest level since the end of April. Equity and oil prices were up moderately while the euro depreciated against both the dollar and yen.

Ms. Yellen spoke in Boston at an economics conference discussing how the slow recovery has challenged economists’ knowledge. She spoke at length about the possibility that the demand side of the economy may cause structural changes in the supply side.

It is common for shortfalls in aggregate demand to reduce economic output over the short run. However, the Fed Chair pointed out that the lengthy decline in demand from the financial crisis could have longer lasting effects on productivity.

Meanwhile Vice Chair Fischer spoke about the dangers of changing the inflation target or letting inflation run too far above the existing target. While they are seemingly espousing two opposing views of the proper conduct of monetary policy, we do not think this is the case. It looks to us like the chair and the vice chair have reached the understanding that interest rates should rise but very slowly. 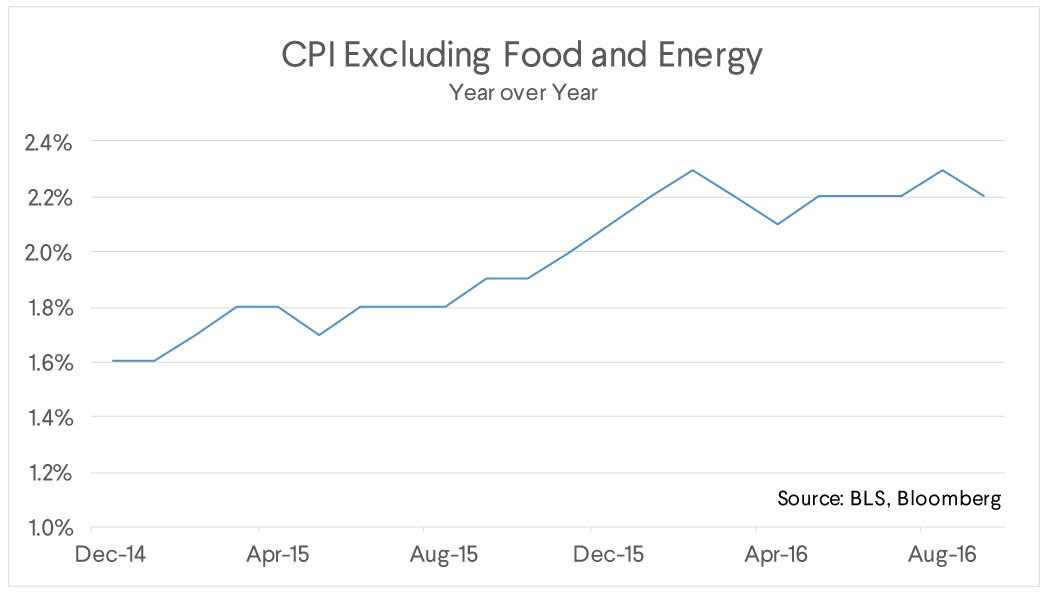 On the data front, we saw the release of the Consumer Price Index (CPI). This index is a widely followed metric of inflation but differs from the one used by the Fed to target inflation.

The month-over-month headline number was up .3%, a large jump. The year-over-year number, excluding food and energy (the most volatile components), was down slightly at 2.2%. As we can see in the chart above, however, the small downtick pales in comparison to the broader trend that has brought us from 1.6% at the start of 2015 to 2.2% today.

Markets have noticed this rise in inflation. The United States treasury issues inflation-protected bonds, called TIPS. These bonds compensate holders with additional interest for actual changes in the CPI index that occur over their life. Interest rates the Treasury must pay on regular, nominal Treasuries is based on investors expectation of what future inflation will be.

The expected rate of inflation that (if realized) would equalize the interest paid on the two securities is called the “breakeven” inflation rate. We can see below that the increase in breakeven inflation this month has driven much of the increase in 10-year nominal rates, implying a relatively constant real interest rate. 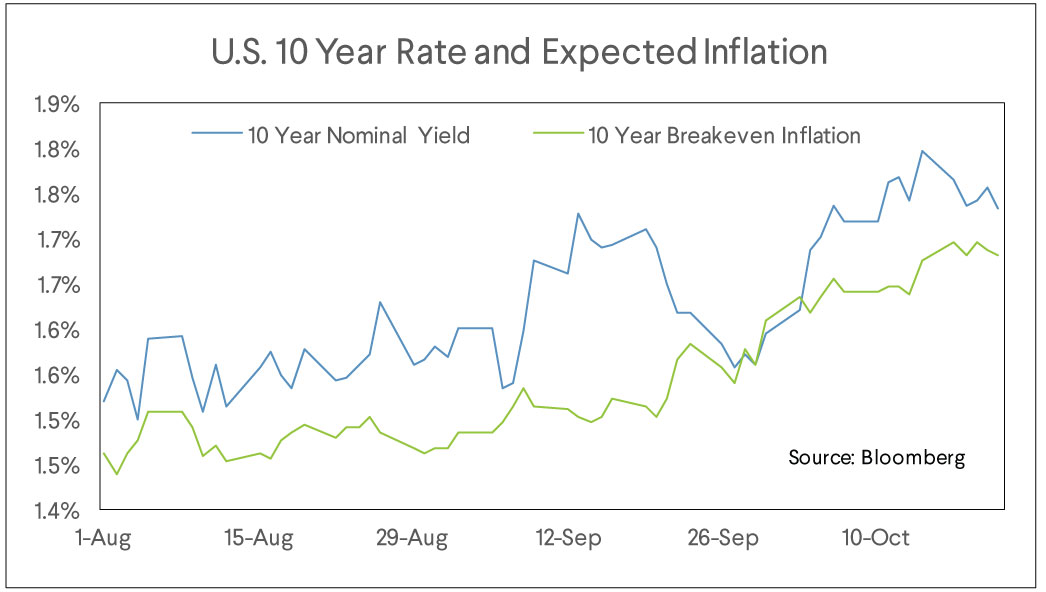 Why does this matter? Not all interest rate increases are the same. If interest rates rise largely because of an increase in expected inflation, then the real burden on firms and consumers is little changed. They may have to borrow at higher interest rates, but they will be able to make the payments by receiving higher prices for their goods or higher wages for their labor.

Should the Fed have to tighten significantly, however, you will see interest rates rise without a commensurate rise in expected inflation. This makes paying the debt back more expensive and leads to a slowdown in borrowing, spending, and economic activity.

Fed Chair Yellen and Vice Chair Fischer’s comments reassure us that the Fed does not see a rapid increase in rates or inflation as their base case. We continue to like equities here. As a hedge against continued increases in inflation and the Fed having to hike faster than expected we like shorter duration fixed income, which is less sensitive to a rise in interest rates.