The Trump theme discussed in our last commentary continues to drive markets. The promise of infrastructure spending and tax cuts have driven Treasury yields higher and strengthened the dollar almost relentlessly since the election three weeks ago.

So-called “animal spirits” and self-fulfilling expectations can often move markets. However, this rally has been accompanied by solid economic data that supports the narrative of faster growth and inflation. With the risks of a post-election panic diminished, we have reduced fixed income duration in our portfolios in order to avoid capital losses from rising real interest rates.

When new bonds pay higher interest than similar old bonds, the old bonds have to match the yield. Since the interest payments on old bonds are fixed, the market price of old bonds will fall until the yields on old and new bonds match.

The fall in price of the old bonds results in a capital loss. The longer the maturity of the old bond, the more its market price must fall because you are stuck with the low-interest payments for a long time. Duration is a fancy name for maturity. So if interest rates go up, the price of long duration bonds fall more than short duration bond prices.

The 10-year Treasury yield has risen above its intra-year high and is now at levels last seen in the middle of 2015. For foreigners to buy U.S. assets and receive higher U.S. interest rates, they need to buy dollars. Higher interest rates have increased demand for the dollar, causing it to appreciate against our main trading partners. 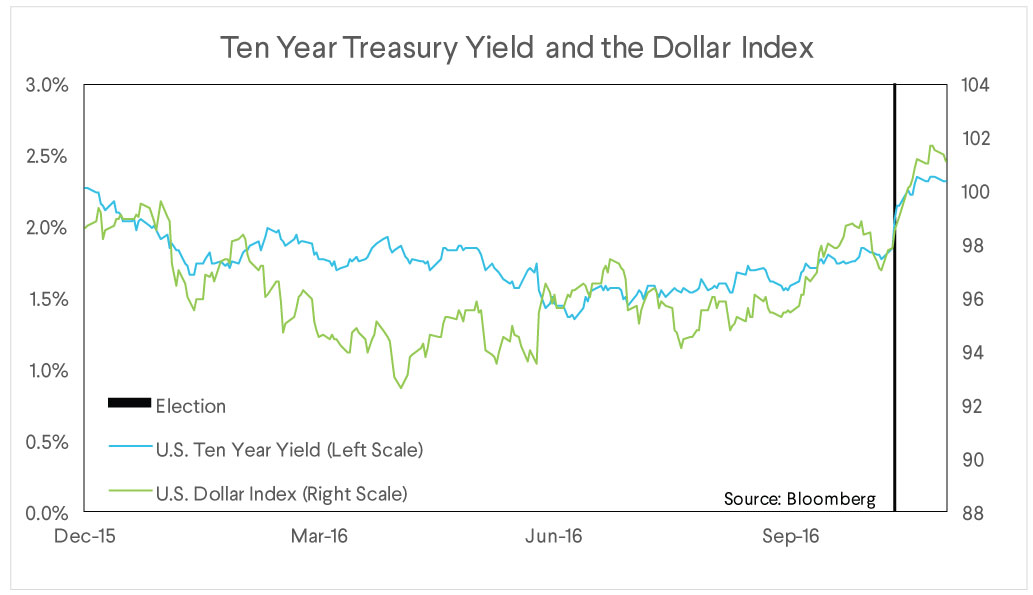 Interest rates are determined by many things including expectations of future inflation, growth, and government budget deficits. President-elect Trump’s policies have promised more of all three.
With help of a Republican Congress, the new President should have little trouble following through on his promise of large tax cuts.

Optimistic promises of the revenue neutrality notwithstanding, the market sees a widening budget deficit as a near certainty. These deficits need to be funded by Treasury bonds. Investors will expect a higher return on those bonds than they get today. So interest rates are expected to rise.

Also weighing on bond prices (and pushing up yields) is the expected macroeconomic impact of President Trump’s polices. As discussed in our last commentary, both tax cuts and infrastructure investment will increase spending. An increase in spending raises interest rates through two channels: inflation and growth. With labor already scarce, wages will be pushed up as firms hire more workers to meet increased demand. This will likely increase inflation.

As inflation rises, investors require higher return to purchase the same amount of goods and services as before. In addition, the increase in government spending will lead to faster economic growth. Many firms will see their profits grow. During periods of accelerating economic growth stocks tend to outperform bonds and bond yields are forced to rise in order to remain attractive as investments.

All Because of Expectations?

Expectations are extremely powerful forces in financial markets. If you think the price an asset will rise tomorrow, you buy it today. If the whole market has the same expectation, the market will buy the asset until today’s price equals tomorrow’s price less a risk-adjusted return equal to other assets. Changes in expectations can move prices wildly even with little change in the economic variables that should drive asset prices, such as inflation or company earnings. Does that mean these variables don’t matter?

On the contrary, they do. Economic data serves as a reality check to keep investor expectations about the future from varying too widely from likely scenarios based on facts. This rally in Treasury yields has moved so swiftly because the underlying data coming in gives credence to views of stronger growth and accelerating inflation. For instance, inflation has continued to accelerate in the United States. 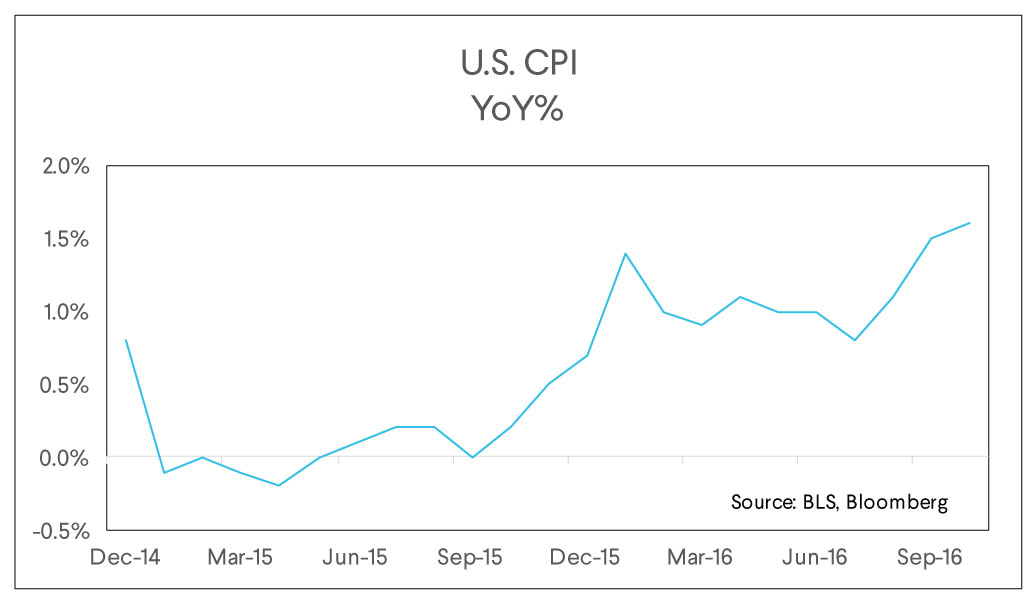 Various measures of economic activity have showed a similar trend in recent months. Below is a composite measure of manufacturing and non-manufacturing activity gathered from business surveys. 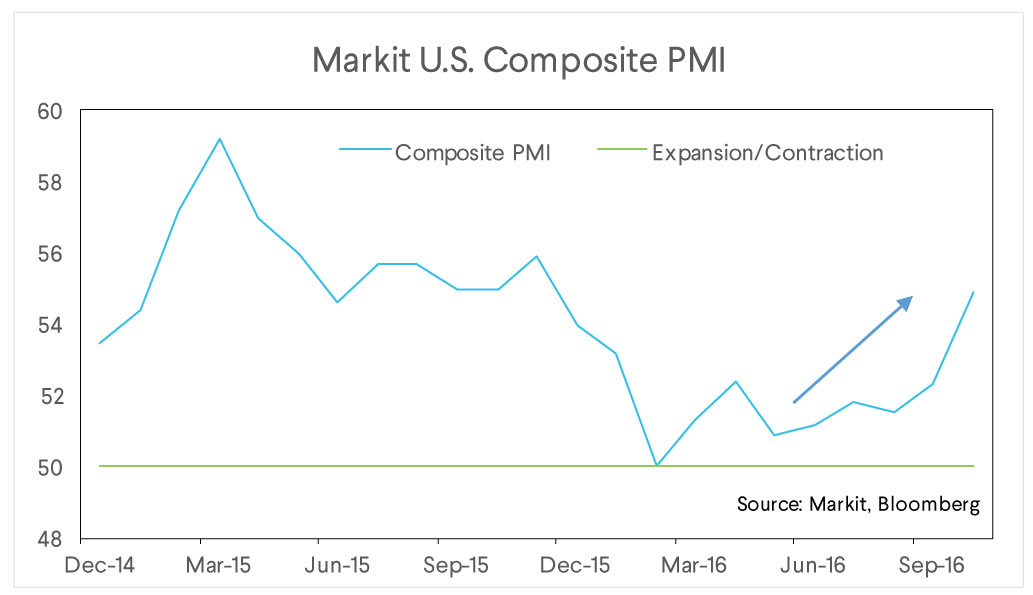 The market currently expects higher rates and we see little data coming near-term to dash those expectations. If economic activity and inflation continue to accelerate, then rates will move higher even if expectations of future fiscal policy (taxes and government spending) change.

With the Fed’s decision to hike rates in their December meeting all but made, the interesting thing to look for is their guidance on future hikes. We discussed their expectations of only moderate rate hikes over 2017 in previous editions of this commentary. Should they come out with more hawkish guidance, longer-term yields will rise further.

We have reduced the duration (sensitivity to interest rate changes) in our portfolios by moving out of our inflation-protected Treasury position. We continue to like a globally diversified portfolio of equities, many of which should benefit from a stronger dollar.