An unexpected Trump victory in the presidential election introduced a level of volatility not seen since Brexit. The initial selling of US equities in the futures market was quickly reversed but emerging market assets remained depressed as the market tried to guess what Trump trade policies might be.

In our view the most important shift in economic policy will be a substantial tax cut that will increase aggregate demand and inflation. It is ironic that the fiscal stimulus called for before the election by prominent economists on both ends of the political spectrum (Larry Summers to Paul Krugman) now looks very likely to happen. These proposals were dead in the water when a Democrat in the White House was unlikely to cut taxes and a Republican congress would not increase spending.

The increase in the US government debt that will surely follow from the tax cuts has not yet been a prominent part of market commentary. We see this environment as positive for equities in the US and other developed countries as stronger growth will more than offset higher interest rates. For Mexico and other emerging markets uncertainty about trade policy and higher US interest rates make the outlook less promising. We have made a portfolio change choosing to broaden our equity exposure to developed countries at the expense of exposure to emerging markets and have moved more of our bond position into lower volatility, inflation-protected government bonds.

As President-elect Trump pulled away in exit polls in Florida and it became clear that he would win Michigan, emerging market assets and equities fell while Treasury bonds soared in price. 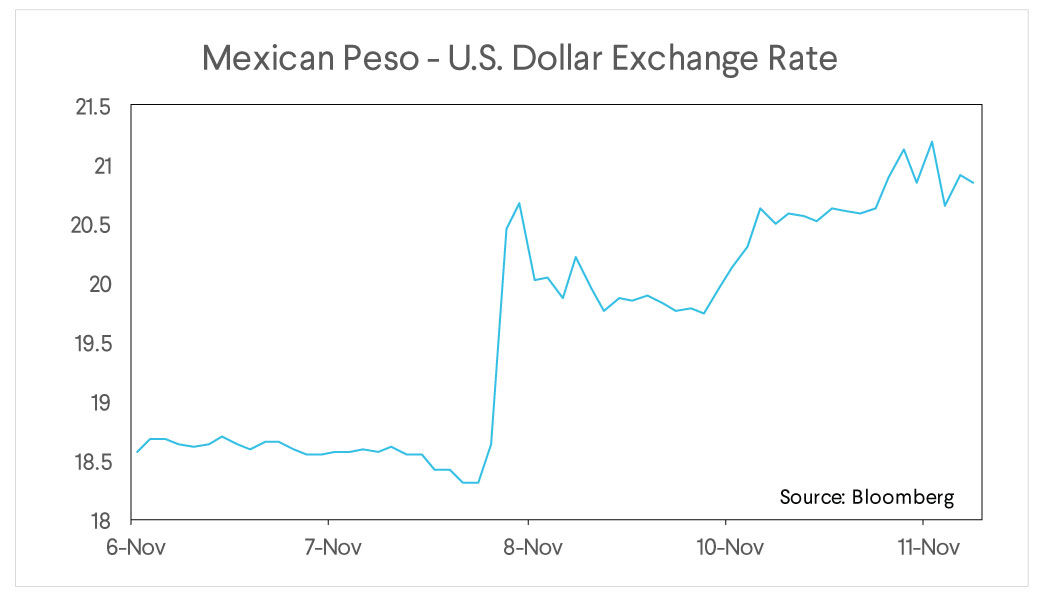 The Mexican peso plunged over 10%. The currency is especially vulnerable to a Trump presidency because of his views on NAFTA, the trade agreement linking the United States, Mexico, and Canada, and because of Mexico’s overall reliance on the United States as a trade partner. U.S. Equity futures sold off violently as well, as Secretary Clinton’s path to the White House became less and less feasible. 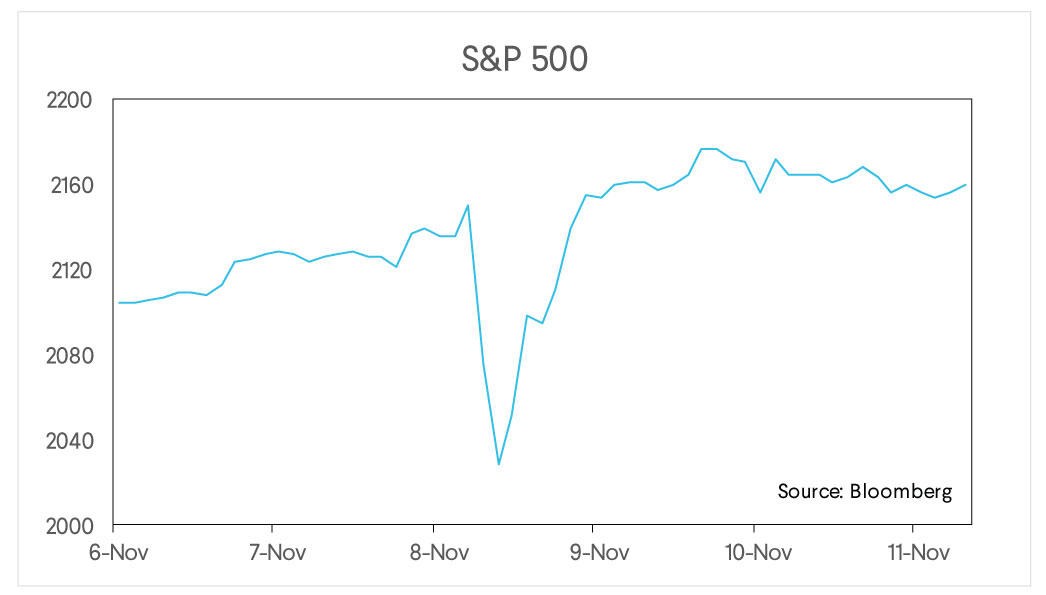 Note the difference between these two charts. Both the peso and S&P 500 futures sold off in the immediate aftermath of the election. However, U.S. equities quickly found renewed buying interest and rallied above their previous level. The Mexican peso found no such interest and continued to depreciate throughout the week. Why? Because of the economic effects of a Trump administration’s likely policies.

What are those likely policies? Leaving the more controversial views on social and foreign policy aside, as important as they may be for longer term economic growth, the new administration’s fiscal policy looks Reganite. President-elect Trump’s “Contract with the American Voter” describes tax cuts and infrastructure investment. These policies will increase aggregate demand. With an already tight labor market, firms will be forced to offer higher wages and will pass through the higher costs to the consumer through price increases. This suggests an increase in GDP growth, inflation, and interest rates. However, the Trump Campaign’s promise of 4% GDP growth looks unrealistic given demographic constraints. If expected inflation continues to dominate the move upwards in interest rates and real rates remain low, we see it as a positive environment for US equities.

The market looks to have settled on an outlook that is similar to ours. In addition to rising equity prices, Treasury yields are sharply higher as prices drop. We can see in the chart below that the move this week dwarfs the rise in yields seen over the past few months and discussed here often. 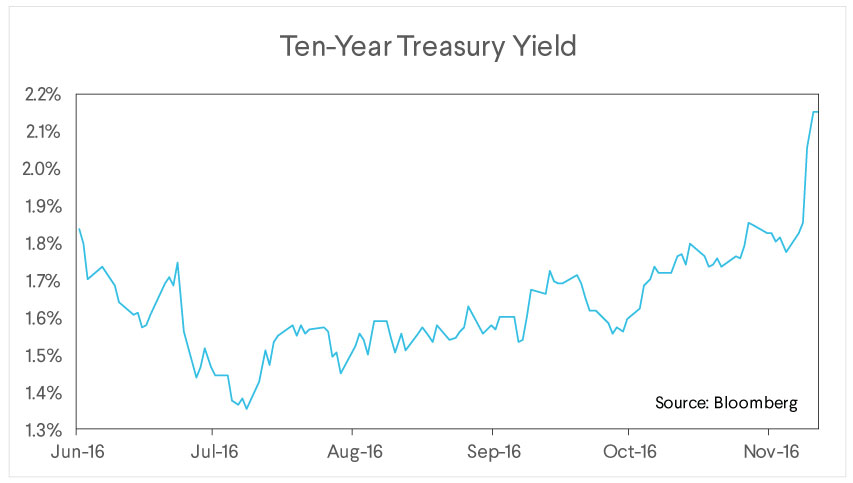 Alongside the rise in yields has been a strong appreciation of the U.S. dollar. Periods of strong dollar appreciation have led to clear winners and losers in financial markets. For instance, some emerging markets owe a large amount of debt to foreigners and that debt is often denominated in U.S. dollars. As the dollar appreciates it becomes much harder for them to repay. On the flip side, many large companies in Europe and the United Kingdom do business in the United States. As they sell their goods for dollars but book profits in pounds or euros, a surging dollar is good for earnings growth.

After the election, we see the risks at the December Fed meeting as tilted towards a more hawkish stance than previously thought. Because of the implications of that for dollar strength going forward we have reallocated our portfolios to a broader swath of dollar-hedged, developed-market equities, but reduced our emerging market exposure. In addition, we have allocated fixed income exposure to inflation-protected U.S. government bonds that will help diversify risk in a rising rate environment driven primarily by higher inflation.