Recently released data continues to show a world economy gaining momentum. While the U.S. jobs report was mixed, business survey data from the U.S. and elsewhere showed continued and accelerating expansion. The recent rise in bond yields moderated this week as market attention focused on a slate of events including the Italian referendum and upcoming meetings of the European Central Bank (ECB) and Federal Reserve.

We have recently reduced our overweight position in the United States and increased exposure to the United Kingdom and Eurozone. This shift is driven by the differing outlooks for monetary policy on each side of the Atlantic, by supportive valuations, and the market’s increased tolerance for political risk.

We can see in the chart below that the unemployment rate has followed a strikingly different path in the Eurozone when compared to the United States and United Kingdom. Recovery was delayed in Europe because of the debt crisis that hit the peripheral countries of Greece, Portugal, Ireland, Spain, and Italy in the years following the Global Financial Crisis. But, since 2013 unemployment in the Eurozone has declined at a rate similar to that of the US and UK. To be sure, the Eurozone has structurally higher levels of unemployment (just look at the difference between the series before 2008), but the Eurozone’s “late start” suggests that unemployment has much farther to fall there than in either the U.K. or the U.S. 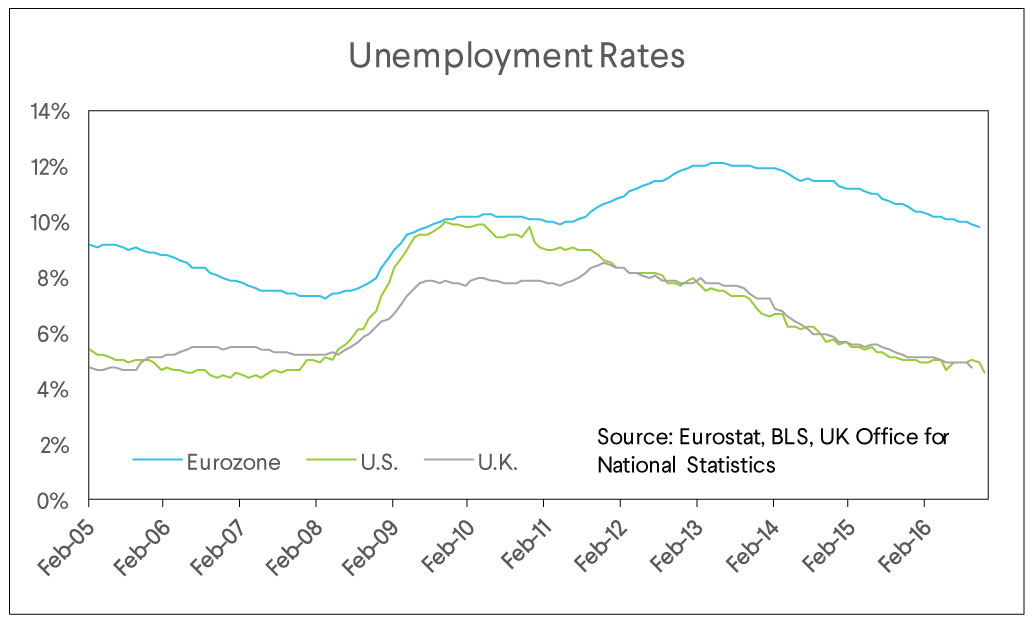 Different monetary policies have reflected the very different paths for recovery. We can see the market’s expectation of interest rate hikes below. The outlook for the ECB’s monetary policy is incredibly dovish, with rates not expected to go positive until 2018. The market expects the Bank of England (BoE) to raise rates at a similarly slow pace (albeit from a higher level). The reasoning here is not that British unemployment has much further to fall (it doesn’t), but that the BoE is unlikely to hike rates until they know what form Brexit will take. The top line in the chart is the market’s expectation of short-term interest rates in the United States. With a labor market close to full employment and a new administration promising fiscal stimulus, the market expects interest rates to rise much faster in the United States than elsewhere. 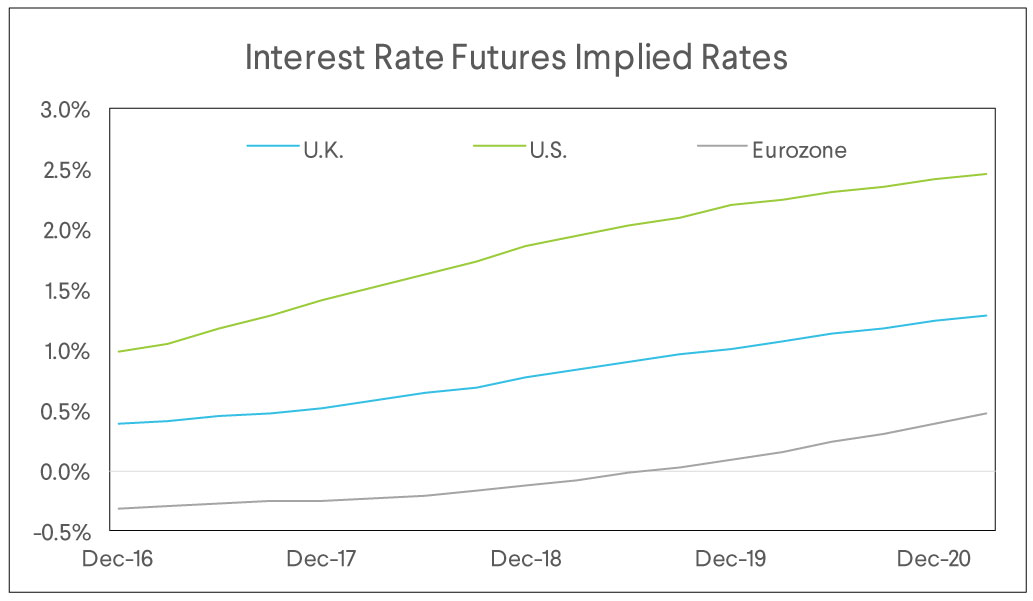 Given lower interest rates and the expected gradual pace of hikes, you would expect higher stock valuations in the U.K. and Eurozone, all else being equal. After all, if the return on bonds is low then domestic investors can be expected to buy stocks, pushing up their price.

That has not been the case. Looking at one popular measure of equity value, the dividend yield1, shows it is the United States that has the most expensive market. Of course all else is not equal. The U.S. has grown faster and thus its companies, with faster expected growth going forward, can command a premium. In addition, the political risks present in both the U.K. and the Eurozone cannot be ignored and have likely kept valuations lower in those economies. 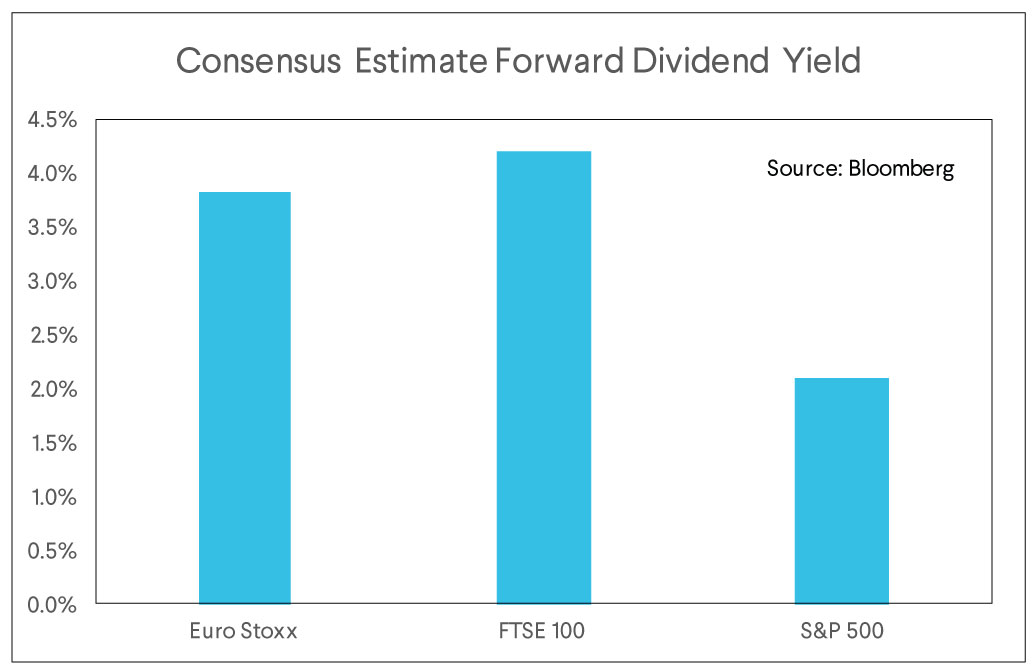 But, investors seem to be more comfortable with political risk. The widely touted fears of a Brexit and the surprise Trump victory affected asset prices for only a few days. The most recent political event was the Italian Referendum. There were expectations of an equity sell off following a “No” vote because this increased the chances of an anti-EU government in Italy and with it a bond crisis in the world’s third largest bond market. While the Euro Stoxx equity index opened negative after the no vote, it was soon followed by substantial buying and closed up several percentage points after two days. 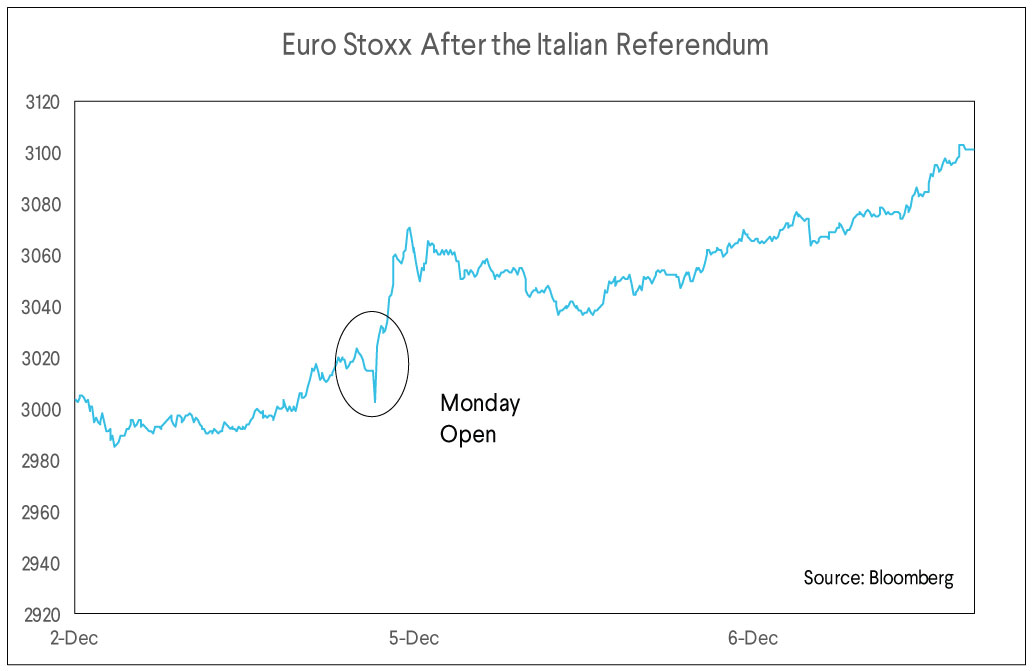 Economic and political risks certainly remain in the U.K. and Europe. However, we feel that when weighed against a more supportive monetary environment and better valuations the risks are well compensated. We will continue to watch the BoE and ECB for signs they will follow the Fed and end the extraordinary monetary policy that has defined the years since the financial crisis, but do not see that as likely until late 2017 or 2018.