U.S. stocks are strong; developed world stocks are rallying, but still uncertain; and despite some investors’ fears, emerging markets are still appealing. Here’s what’s been happening in the market over the past few weeks.

U.S. equities remain strong
United States equities are continuing to look very attractive after a positive jobs report and an impressive earnings season. The hiring report in early May was more positive than expected with 211,000 jobs added in April, bringing unemployment to a 10-year low. There was also continued wage growth, meaning that, on average, households were getting a bump in income. This increased spending power in the economy bodes well for U.S. equities (stocks).

Of course, a low unemployment rate and increased consumer spending brings the question of whether the Federal Reserve will hike interest rates to counteract inflation. A rate hike could weaken U.S. equities as bonds begin to look more attractive. However, jobs reports continue to show relatively steady hiring increases. This suggests that there may be some hidden slack in the labor market; people who may have dropped out of the work force entirely during the financial crisis are continuing to come back into the fold. 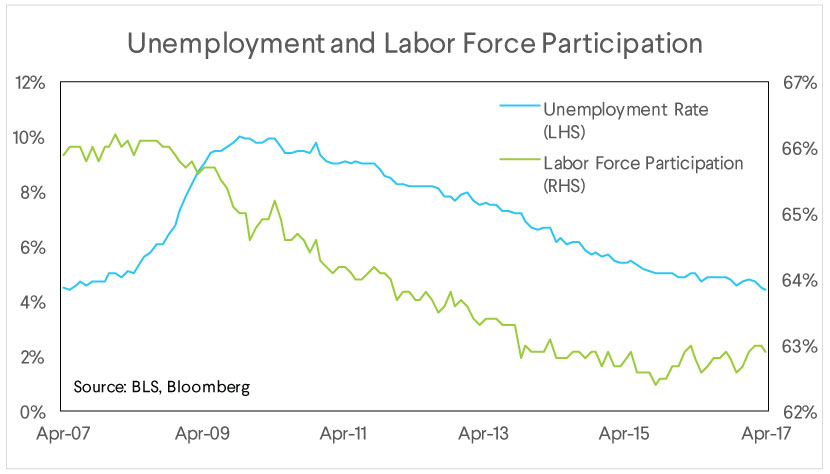 This possibility was raised by Chair Yellen in a speech late last year. She noted that because of this slack, it may be desirable to keep interest rates lower than the unemployment rate would normally dictate. Despite a moderate rate increase expected to go into effect next month, we think the Fed is unlikely to hike interest rates aggressively until there is more evidence that we have reached full employment. With next month’s hike priced in, we do not see a significant risk to equities from Fed policy. 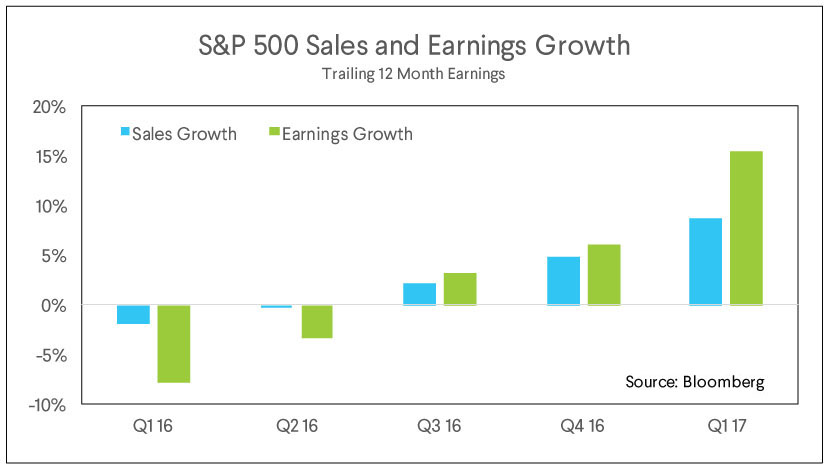 All these factors suggest that risky assets in the U.S. should continue to perform well, underscoring why we’re finding the U.S. so appealing right now.

Developed world equities still uncertain despite rally
Over the past two weeks, stocks of companies in the developed world outside the U.S. are catching up after lagging behind for much of the post-U.S. election rally. This is largely because European equities were held back due to uncertainty about which way the French election would go. With Macron’s victory and a smooth election in the Netherlands back in March, developed world (excluding U.S.) equities have begun to close the gap. 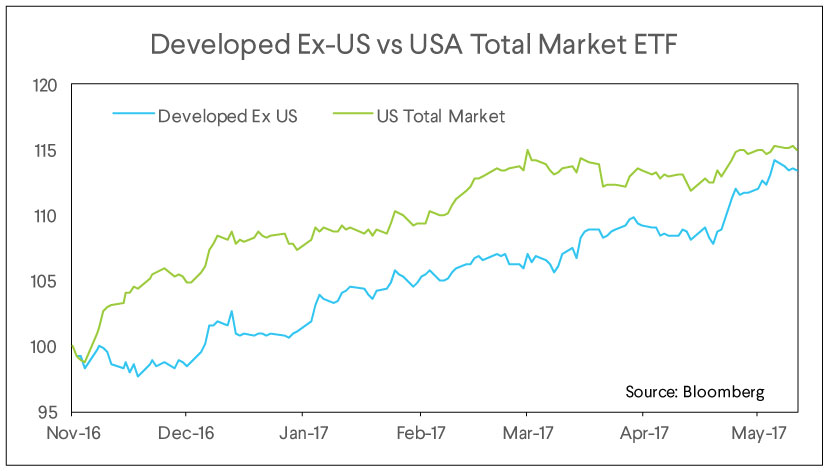 However, if we zoom out from these recent events, there is still a lot of uncertainty in Europe and Japan. This makes developed world ex-U.S. equities less attractive than U.S. equities from a long-term perspective. It is unclear how Italy’s banking problems will get resolved and debt talks are set to resume in Greece. The E.U. may end up having to subsidize these two governments as they get back on their feet. Additionally, it is difficult to predict what fault lines the Brexit negotiations could expose among member countries. These conflicts could reignite an anti-Euro, nationalist sentiment like we saw during the debt crisis, putting the future of the Eurozone in doubt.

In Japan, equities remain reliant on Japanese policy makers to lead the country out of its current disinflationary state, but current efforts inspire little confidence based on the failure of similar policies in the past.

Emerging markets hold potential
The cyclical recovery story in emerging markets is still holding our attention. After years of lagging behind the developed world with recessions in Brazil and Russia, we are finally seeing growth at a faster pace. Global trade is accelerating once more, and the positive growth in the U.S. and E.U. is expected to further boost emerging market economies as demand for exports increases.

There have been some recent signs of slowed growth in China. This is mostly due to the fact that China recently raised interest rates in order to curb property price inflation. This has some investors nervous, seeing the slowdown as a potential sign of a financial crisis, but we see this particular lag as temporary. Slowdowns in China caused trouble for emerging markets in 2015 and 2016, but that came alongside crashing oil prices, stagnation in global trade, and a large-scale capital flight from the country. The latter event strengthened the dollar, which worsened emerging markets’ position on foreign debt.

China has since taken action to reverse this course, making it difficult for people to send capital abroad in order to head off further turmoil and curb rapid growth. We see this as creating financial stability over the long term. At the same time, valuations of companies that do the majority of their business in emerging market economies still remain very low.

Overall, we continue to find the U.S. and emerging markets attractive, while keeping a cautious eye on what’s happening in the E.U.