So far the world is living up to the hype of a post-election economic expansion. Economies are large, inertial systems and there is little doubt that the seeds of the current uptick in activity were laid several months ago. Regardless, the upward revisions in expected growth and inflation after the election of Donald Trump continue to be vindicated as the data fits the narrative. We are beginning to hear more about increased uncertainty surrounding Trump’s economic policies but our experience is that economic forecasters always view the world as “unusually” uncertain.

Last week saw the release of various business surveys and inflation data from around the world. Measures of activity were broadly up and manufacturing indices from many countries continued to climb, implying accelerating activity. China’s climb above 50 on the index, considered expansion territory, is especially welcome given its integral position in global supply chains and as a trade partner for emerging markets. 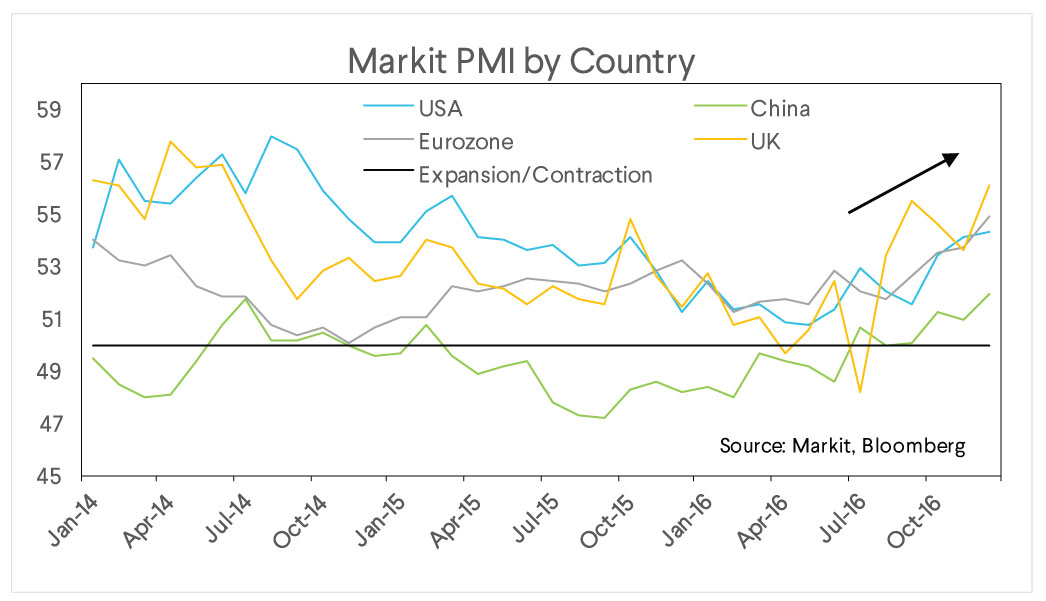 A business survey conducted in the United States by the Institute for Supply Management (ISM) contains both information about activity and responses about the prices paid by manufacturers surveyed. December showed an extremely sharp increase in prices paid since most firms paid either the same or higher prices than a month ago. 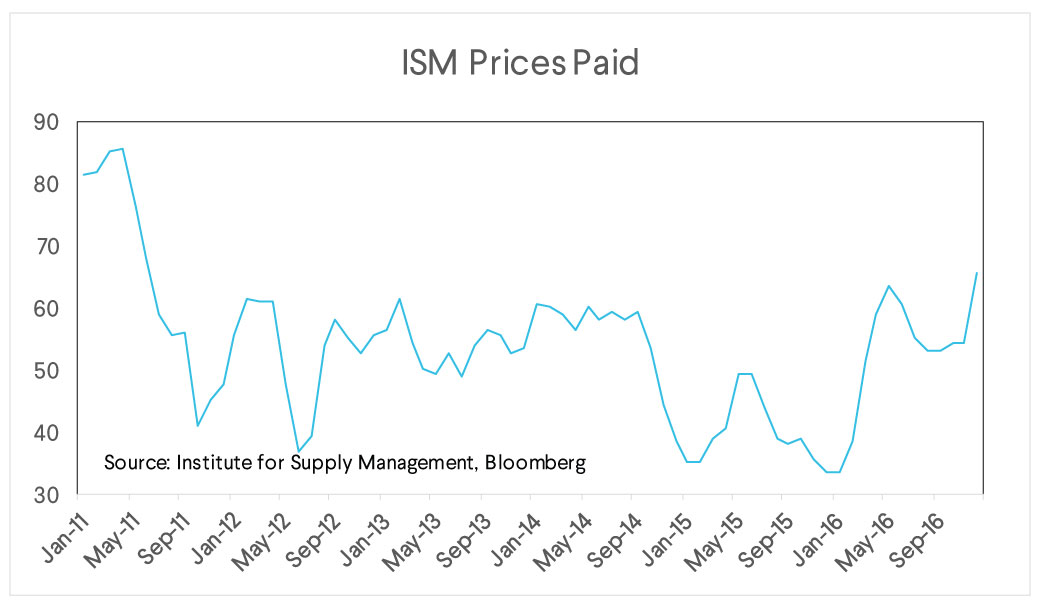 The jump in prices paid by manufacturers coincides with a large jump in German Consumer Prices. The index spiked up from an annual inflation rate of .8% in November to 1.7% in the preliminary December release. This is largely due to low prices in December of 2015, especially oil. However, even moderate monthly numbers over the next several months should keep annual inflation running close to the European Central Bank’s target. This makes further stimulus measures unlikely, but we still see the Eurozone as at least 9-12 months away from policy tightening. 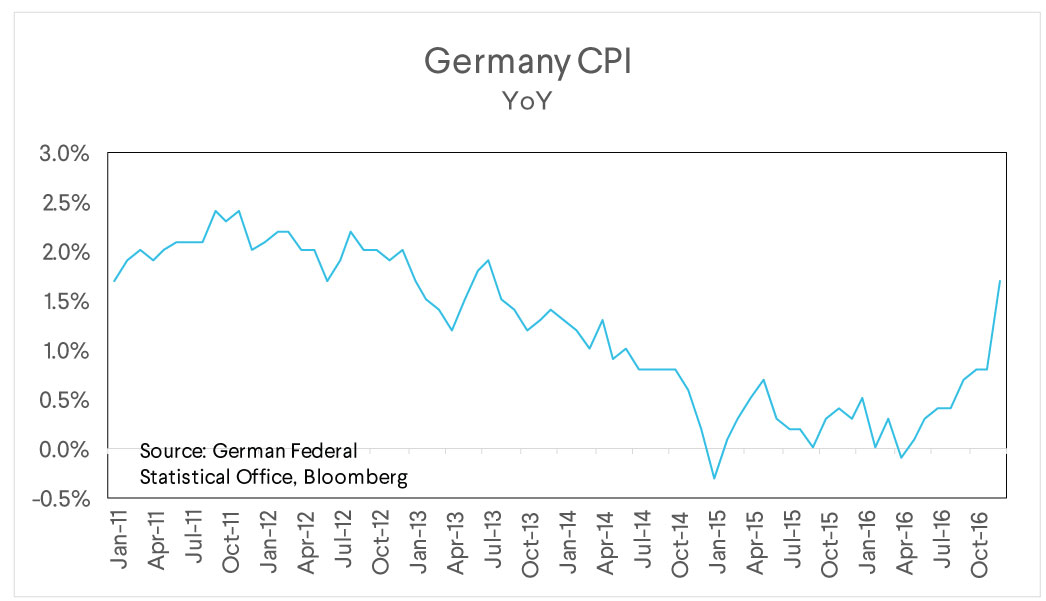 Friday’s nonfarm payrolls report provided even more evidence that prices are rising globally, as wages rose at 2.9% year over year. This is the fastest aggregate wages have grown since before the financial crisis. Firms will face the inevitable choice of passing on higher costs to consumers and possibly losing market share, or seeing their profit margins decrease. We think the former is more likely and expect consumer prices to continue rising. 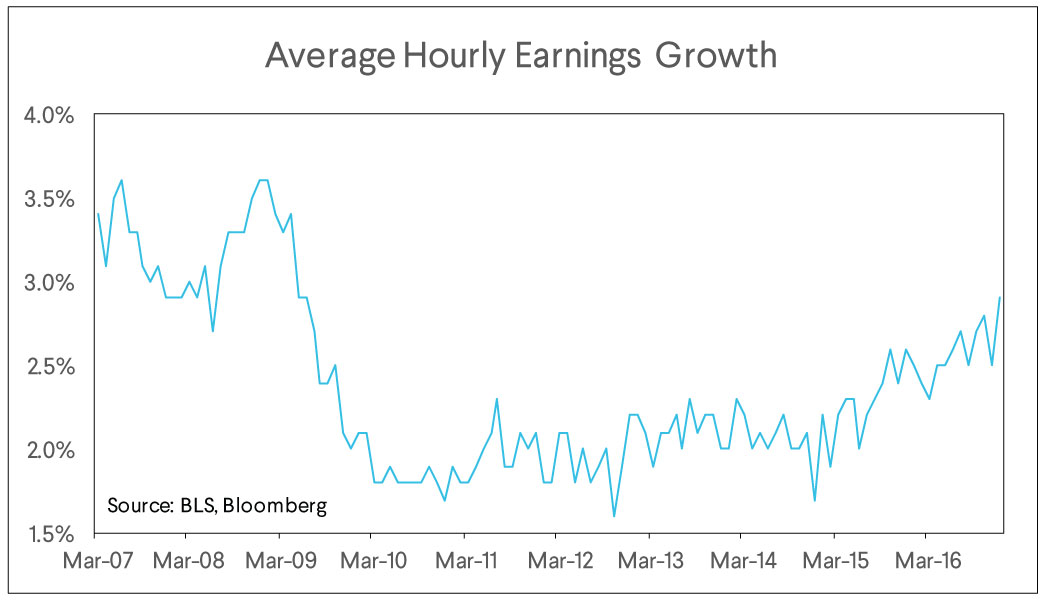 We see little to get in the way of rising equity prices and a stronger dollar near term. We like a globally diversified equity portfolio with hedged currency exposure. In fixed income we prefer short duration assets to protect against further increases in interest rates.