After breaking through the much-watched 20,000 level, the Dow Jones Industrial Average, and other major equity indices, have retreated over the past several days. The pull back in equities, the rise in Treasury prices, and dollar sell off are all clearly related to actions of the Trump administration. Indeed, the likelihood of an economically destabilizing policy action by the administration rises as he continues to pursue policies previously thought to be campaign rhetoric. A border tax, for instance, could be incredibly destabilizing to the U.S. economy.

Still, data continues to show a U.S. and global economy with accelerating activity. Markets will look to Wednesday’s Fed Open Market Committee decision and statement for any update on the expected pace of hikes from the world’s most important central bank.

Leaving a discussion of the proper trade-off between national security and humanitarian assistance aside, we find President Trump’s recent executive orders worrying for what they portend about potential policy actions he might undertake in the future. A much-discussed topic on the campaign was the “bad deals” America has signed with its trading partners.

The administration has brought up a border tax as a method of mitigating some of those bad deals as well as to help fund the border wall with Mexico. Many economists have come out against the tariff on efficiency grounds, but have viewed the effects as manageable because they expect the dollar to appreciate to wipe out any competitive advantage.

We have a less sanguine view. We see a significant risk that the shift of consumption of imported goods to domestic goods would be much slower than some economists think. This could cause significant unemployment and bankruptcies in industries reliant on import activity without a commensurate increase in activity elsewhere in the country. For instance, truck drivers in Texas who deliver Corona will lose their jobs long before truck drivers get hired in New Jersey to move more Budweiser.

The dollar may appreciate to restore equilibrium in the FX market. After all, you certainly don’t want as many pesos if Mexican goods cost 20% more, unless of course the peso depreciates by 20%! However, this will put significant stress on international companies and countries that borrowed in dollars but earn revenue in a different currency. This could significantly curtail global economic activity as companies retrench in order to make sure they can pay their now higher dollar debts.

On the bright side, the economic data continues to look good. The recent GDP numbers disappointed, but that was due in large part to the drag on net exports from the stronger dollar. Consumption, the most stable component of GDP and thus the most predictive of future growth, grew at 2.8%. We can see in the chart below that consumption has failed to grow this quickly for much of the post-crisis period.

Moreover, Inflation continues to accelerate globally as the impact of oil price stabilization moves through consumer product prices. To date, the market expectation of Fed rate hikes suggests that the market expects either slower growth or slower inflation than does the Fed. Our view is that the activity and inflation data will force market convergence toward the Fed’s and our outlook. 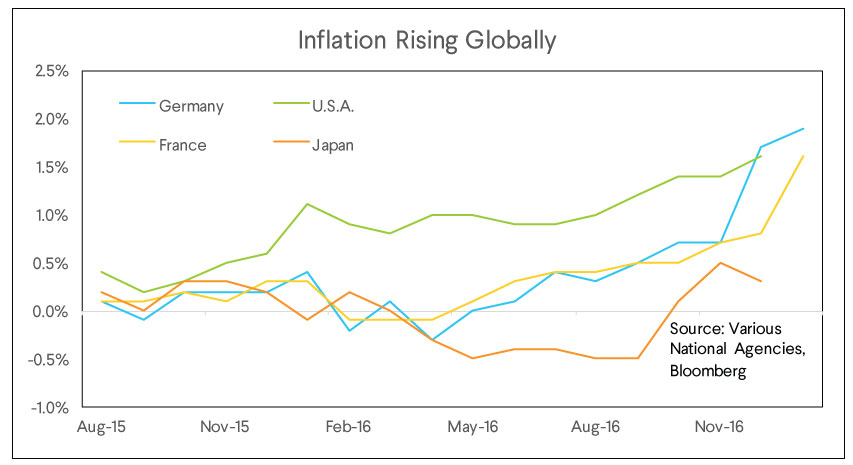 Despite the potential risks due to US politics, we continue to like a globally diversified equity allocation as well as some short-duration, high-yield, and investment grade fixed income depending on risk tolerance. Like everyone else we are less confident about what policies the new administration will follow, but still see higher fiscal spending and lower taxes as the most likely outcome.

After all, everyone likes a tax cut but only half of us will like tax reform. We see fiscal and monetary policy as an especially potent driver of asset prices over the next one to three months as the administration’s economic policies become more clear.

The SoFi Wealth Market Commentary does not provide individually tailored investment advice. It has been prepared without regard to the circumstances and objectives of those who receive it. We recommend that investors independently evaluate particular investments and strategies, and encourage investors to seek the advice of one of our financial advisors.

The appropriateness of an investment or strategy will depend on an investor’s circumstances and objectives. This is not an offer to buy or sell any security/instrument or to participate in any trading strategy. The value of and income from your investments may vary because of changes in interest rates, foreign exchange rates, default rates, prepayment rates, securities/instruments prices market indexes, operational or financial conditions of companies or other factors. Past performance is not a guide to future performance. Estimates of future performance are based on assumptions that may not be realized.