A victory for the centrist Emmanuel Macron in the first round of the French Presidential Election sent equities, interest rates, and the dollar higher this week. Polls are forecasting an easy victory in the second round for Mr. Macron over nationalist politician and Eurosceptic Marine Le Pen. The result was a welcome development for the so-called “reflation trade” after political uncertainty on both sides of the Atlantic and some disappointing data spurred a bond rally while equities languished. We continue to like our allocation of globally diversified equities, a short duration bias in fixed income, and exposure to emerging markets.

The Return of the Polls?

After surprise results in the Brexit vote and the U.S. presidential election, there was talk of a global resurgence in populism that would spread across Europe, spelling doom for the European Union. Also, surprises in both elections caused doubt over the accuracy of political polls. Thus, the polls which gave Macron a lead heading into the election were looked upon skeptically. There were worries that a victory by Le Pen in the first round might give her momentum in the second round and make her the French President. The possibility of this happening held back equities globally, but especially in Europe. Her nationalistic policies have been viewed as anti-euro, raising questions over the future of the single currency should she become president. 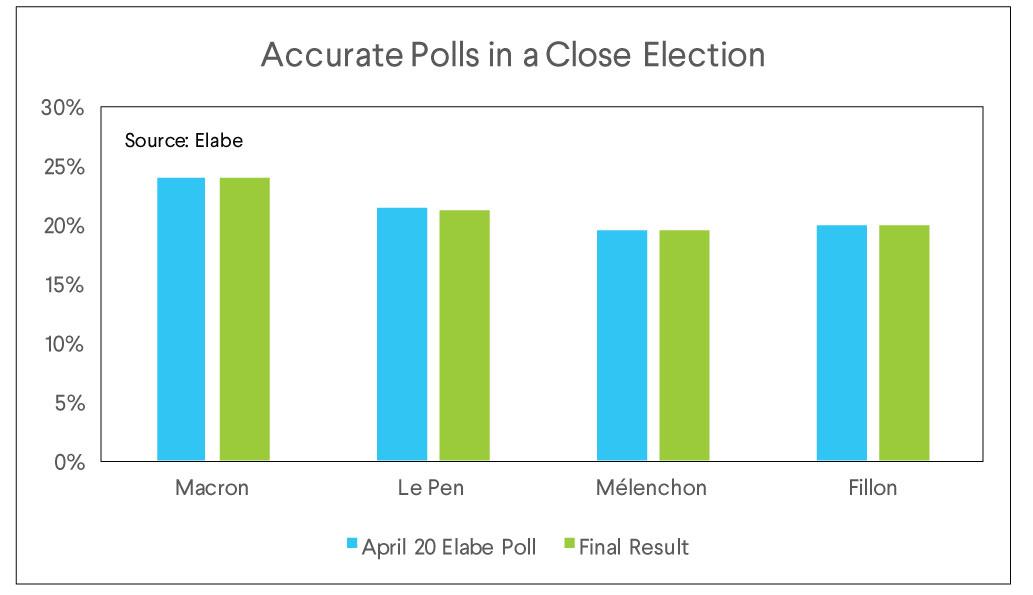 With Macron’s victory in the first round of the election, some of these fears have been put to rest. The incredible accuracy of the polls has reassured markets. We can see in the chart above that in a hotly contested four-way race, polls taken several days before the election were within a percent of the final-outcome. While this may not seem impressive, recall that even the night before the election many U.S. pollsters had Hillary Clinton as the overwhelming favorite to be the next U.S. president. What do the polls say for the second round? They currently see Macron easily winning the second round and becoming the next French President. Should this happen, a significant risk to the Eurozone will be removed and we expect equities will continue to grind higher.

Political Risk Rising in the U.S.

While we have seen political risk dissipate in Europe, it has continued to rise in the United States. The new administration has had trouble passing promised legislation in its first 100 days. After the widely discussed failure to repeal and replace Obamacare, the focus has moved to fiscal policy. President Trump has promised a large tax cut, but it remains unclear whether House Republicans will go along with policies that increase the debt. In addition, the market’s old friend—the debt ceiling—is back on the radar. Yet again Republicans and Democrats will have to agree to raise the silly, self-imposed “ceiling” on Federal debt. If not, the government will shut down until they do.

Current expectations of growth depend on expansionary fiscal policy, and the financial system depends on a functioning U.S. Treasury. As such, some fiscal expansion and a benign resolution to the debt ceiling are likely prerequisites to a smooth continuation of the bull market. We find both likely. The Republican controlled congress will probably use some form of dynamic scoring (predicting that tax cuts will cause higher growth and produce more tax revenue) to help make the tax cuts more palatable. Failing to raise the debt ceiling is a game of political chicken that is too dangerous to go on very long.

The failure of the government to pass expansionary fiscal policy has coincided with a growing mismatch between expectations and reality in U.S. economic data. The Citi Economic Surprise Index is a composite measure of U.S. economic data relative to expectations, where a number above 0 means data is better than expected and less than 0 worse. After several months comfortably above 0, the index has fallen dramatically. This is in part due to investors revising expectations upwards and in part due to some key data reports proving underwhelming. 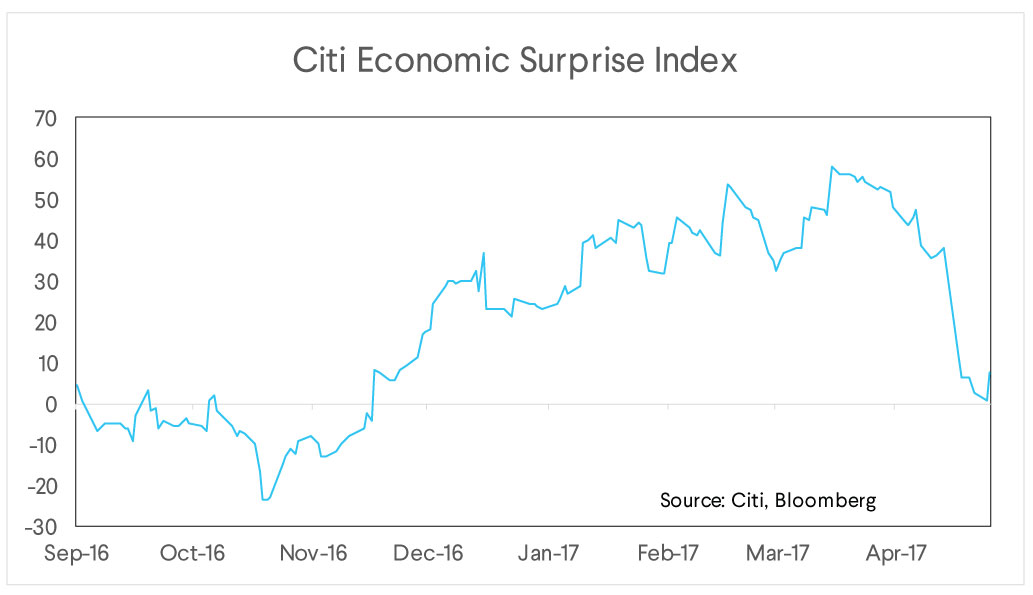 We find it more likely than not that this index heads higher over the next 12 months. Investors have become accustomed to a slow growth, low interest rate environment. We think the opportunity for Republicans to pass tax cuts is too good to pass up, and a tight labor market means accelerating wages and disposable income. We think equities will continue to rally but expect volatility to increase from today’s very low levels. We continue to remain globally diversified with an overweight position in emerging markets, depending on risk level.