With markets quiet heading into year-end, it seems a good time to set out what we will look for in 2017. No one knows the future, but we can prepare for developments that are likely to drive markets over the next year.

Much will depend on how many of President-Elect Trump’s campaign promises come to fruition. He campaigned on reduced taxes and increased infrastructure spending. Markets moved quickly to price in expectations of faster growth and increased inflation. While tax cuts look likely to pass the Republican-controlled congress, the fiscal hawks in congress could impede government spending. Expect market prices to react swiftly to any news of a reduced fiscal stimulus after their recent run-up. 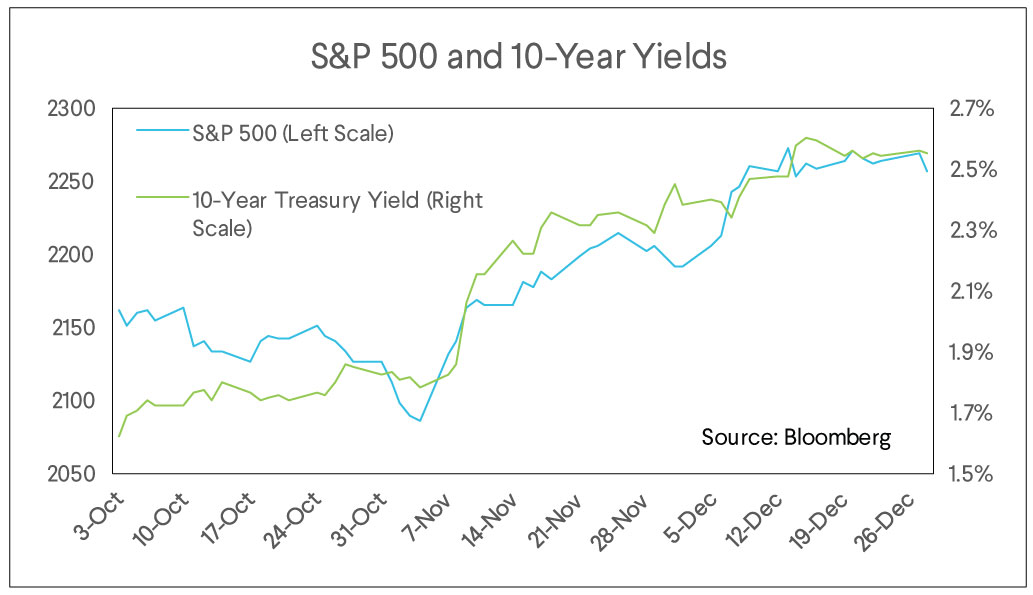 The evolution of consumer price pressures in the United States will also warrant close attention. The Fed forecast’s 3 rate hikes in 2017. The market will adjust to price in the changing probability of these hikes occurring. The chart below shows that CPI inflation moved up in the second half of 2016 but remains pretty tame and below the Fed’s inflation target. The chart also shows market expectations of inflation for the five-year period beginning in five years. This seemingly odd measure of inflation, the so-called 5y5y, is an important input of the Fed’s monetary policy decisions. Clearly expectations for the rate of inflation “way out there” have jumped up considerably in the past two months. The Fed sometimes calls this the expectations “anchor” for the inflation rate and any hint that the anchor has broken free will make multiple rate hikes in 2017 much more likely. 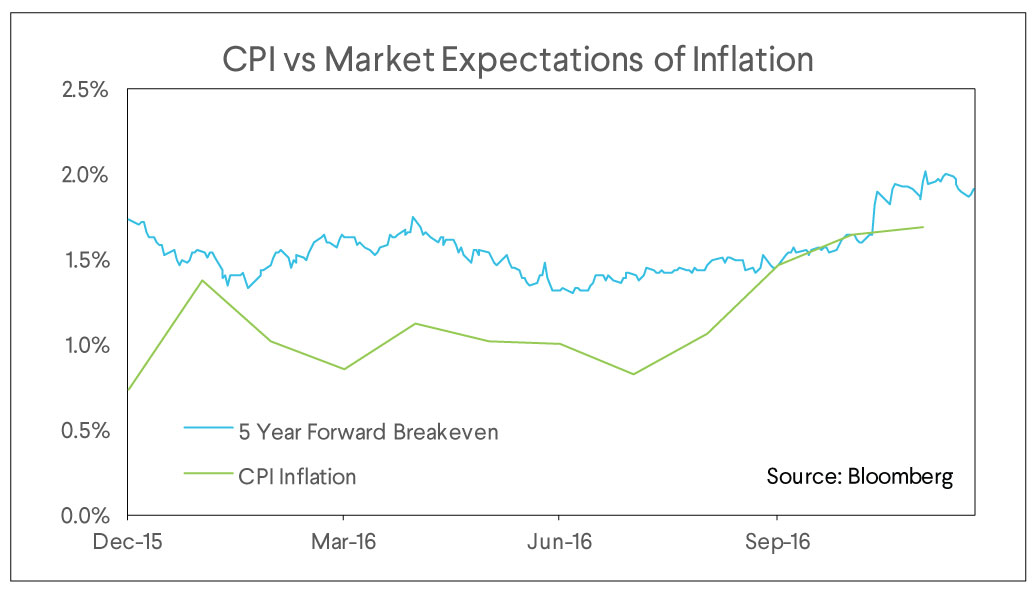 Inflation will depend heavily on oil prices and whether or not the OPEC agreement remains intact as U.S. producers ramp up oil production. The increase in U.S. oil production this decade has been astounding. Equally impressive was the degree to which Saudi Arabia’s policy to continue pumping in the face of declining prices hurt U.S. production. Watching the U.S. supply response over the next 12 months will be key to the outlook for oil prices. A large surge in U.S. production as oil climbs into the mid $50s will likely undermine the recent OPEC agreement to curtail production. After all, why cut back production if American producers will step up and push prices back down? 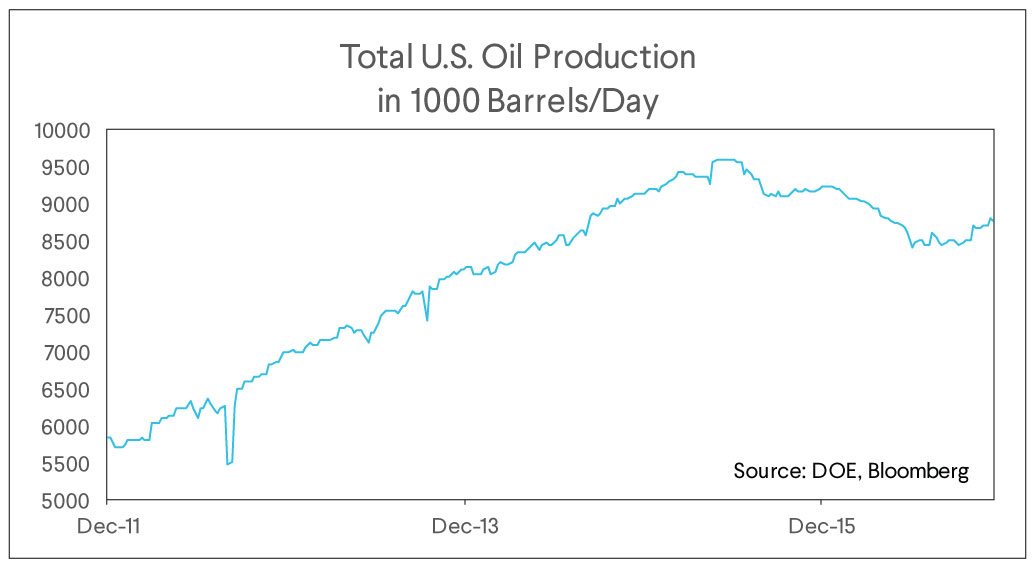 In addition to the prices we pay at the pump, U.S. oil producers may also hold the 2017 fate of emerging markets’ in their hands. The chart below shows the relationship between a broad emerging market exchange rate index and oil prices. Over long periods of time, they move broadly together, which makes sense. Many EM countries rely on oil exports to help them import various goods and services. However, the recent oil rally has failed to help emerging markets. This is because higher oil prices have been overwhelmed by the increased return on holding U.S. Dollars. Should the Fed prove more dovish than expected, look for investors to snatch up emerging market assets which look undervalued relative to oil. Should U.S. producers ramp up production, however, it will put more downward pressure on emerging markets. 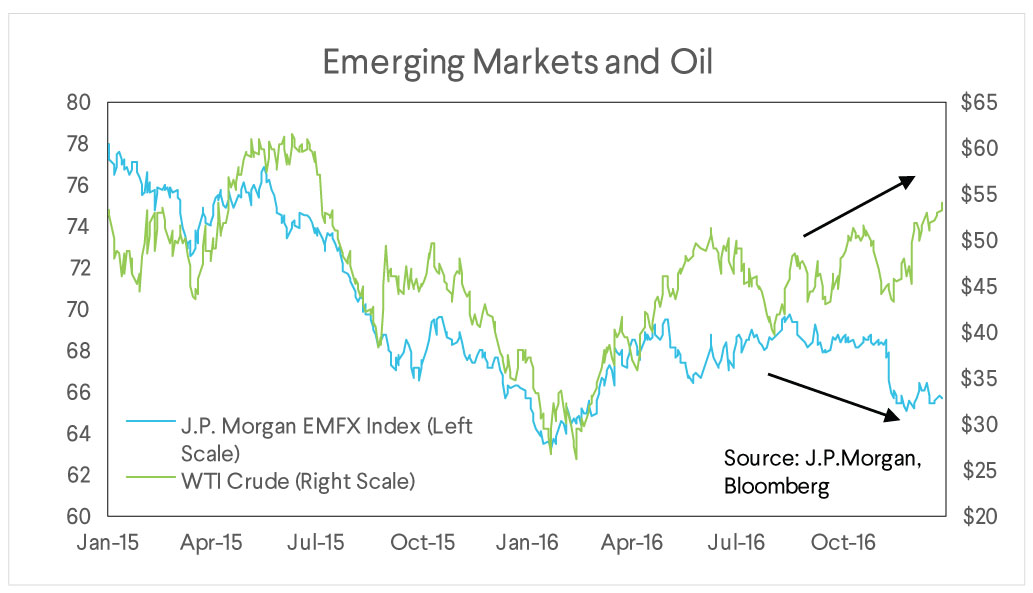 Lastly, we feel the various elections in Europe in 2017 provide the canvas for further expression of discontent in the monetary union. Should this worldwide resurgence in so-called “nationalist” political thought push more Eurosceptic parties into power, political risk in many European countries will rise. European equity prices, especially in the south, will be hit and the euro will likely push through parity with the dollar.