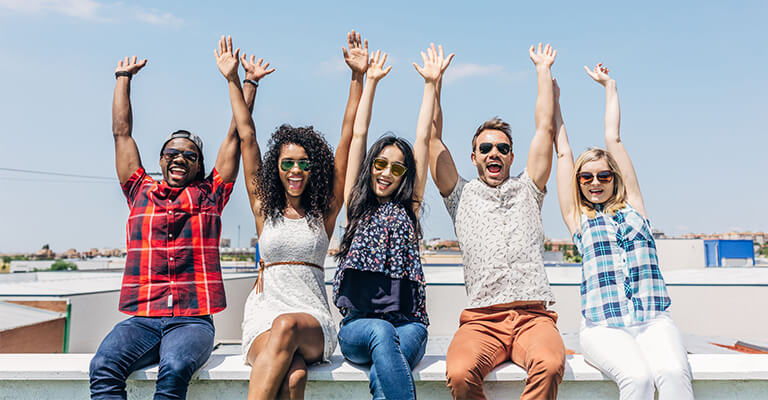 SoFi Member Spotlight: How One Member Tackled Debt Elimination and Had Fun Doing It

College graduates today are sharing a $1.5 trillion loan burden —the second highest debt amount in the nation after home mortgages. And this debt has the potential to lead to things like default, credit card debt, and potentially underemployment if grads can’t immediately find a job in their degree field.

Many students (as well as those who are well out of college) say that dealing with crushing debt has affected their mental health. A recent SoFi poll revealed that 83% felt unable to relax because of their debt burden, half felt that dealing with debt has led to depression, and more than a third reported actually losing sleep. They also said they’ve missed out on travel, self-care, and making major life decisions because of the money they owe.

For our Member Spotlight Series, we chatted with Hartzog about his debt elimination story, and how he and his wife have so far eliminated $89,000 in debt in less than two years—including credit cards, a car loan, and the majority of Hartzog’s student loans (refinanced with SoFi). He’s also created a debt elimination challenge, which has won praise in social media circles. Here’s what Hartzog had to say about crushing his debt.

SoFi: Before you started aggressively paying down your debt, what was your relationship with money in general?

Hartzog: In college, I had quite a few jobs, four to five at a time. That money left my hands as fast as it came in. I opened my first credit card and maxed it out in college. I took out loans and sometimes the loans were in excess and I would use those funds for anything ranging from food to just pocket money. And I always knew one day I would have to pay all that money back… that day came six months after graduation.

SoFi: How did you feel when you first realized how much debt you were in between credit cards, car loans, student loans, etc.?

Hartzog: All those years of studying and getting book-smart, no one sits down and tells you how to map out your future for paying off these loans. My loans defaulted because I took them lightly. This is when I was first introduced to SoFi. It was described to me as an online lender that actually cares about the person and not the debt amount. But since I was in default, I was declined [for refinancing]. I mean, this made sense. Who is going to lend someone money on top of the money they already aren’t paying?

SoFi: How did you change your behavior so you could get approved for student loan refinancing with SoFi?

Hartzog: I started paying the minimum on my loans for a year, paid off my credit card and thought I’d I give that SoFi thing a shot again. This time I was accepted—in January of 2016. It opened me up to a community of people who were actually paying off loans and sharing stories about it. At that point, I was still paying the minimum payment on my loans.

Hartzog: My wife Jhanilka and I got married in May of 2016. At that point, we knew we had to get focused on paying off debt in order for us to help our family and our future. We used the debt snowball method, starting with the smallest debt and rolling those payments over to the next.

SoFi: What are your goals now, both financial and otherwise?

Hartzog: To be completely debt-free in less than two years. It requires a ton of focus and budgeting. We can then begin to help our family and friends out with more financial assistance when required, without feeling like we are putting ourselves further from our goals. Our story has inspired others and we get a ton of financial or debt-related questions—I love speaking about and helping people.

SoFi: You created an online game based around reducing debt. How has that worked out?

Hartzog: It was a truly gratifying challenge that allowed me to align my personal and family goals with friends and strangers to keep each other accountable.

If you’re working on eliminating your debt, check out resources like SoFi’s Debt Checklist. And if student loan debt is getting you down, see what SoFi refinancing has to offer in just two minutes! look into refinancing your student loans to one, low-rate monthly payment with SoFi.

Anthony and Jhanilka Hartzog dedicate their time to creating debt elimination games, blog posts, podcasts, and videos to teach and encourage others to gain control of their debt. Recently transplanted from New York, Anthony currently resides in Dallas.

The individuals interviewed for this article were not compensated for their participation. Their advice is educational in nature, is not individualized, and is may not be applicable to your unique situation. It is not intended to serve as the primary or sole basis for your financial decisions.

The savings and experiences of members herein may not be representative of the experiences of all members. Savings are not guaranteed and will vary based on your unique situation and other factors.

Notice: SoFi refinance loans are private loans and do not have the same repayment options that the federal loan program offers such as Income Based Repayment or Income Contingent Repayment or PAYE. SoFi always recommends that you consult a qualified financial advisor to discuss what is best for your unique situation.

The information and analysis provided through hyperlinks to third party websites, while believed to be accurate, cannot be guaranteed by SoFi. Links are provided for informational purposes and should not be viewed as an endorsement. No brands or products mentioned are affiliated with SoFi, nor do they endorse or sponsor this offer. Third party trademarks referenced herein are property of their respective owners.