Equities have stumbled over the past several days and interest rates have fallen alongside the dollar. The main impetus for the move was a failed attempt by the new administration and Republican members of the House of Representatives to repeal and replace the Affordable Care Act, or Obamacare.

While congressional dysfunction was the most proximate cause of the selloff, there is a growing concern by market participants over the divergence between strong expectations data gleaned from surveys and weak hard economic data coming in.

Emerging Market and European equities have continued to perform this month and we reaffirm our view that a globally diversified equity portfolio with short duration fixed income should continue to perform in the current economic environment.

The failure to repeal and replace Obamacare riled equity markets for several reasons. First it would have repealed a special tax on capital gain, dividend, and interest income for families that made over $250,000. A reduction in taxes on financial assets makes them more attractive and their prices go up. As markets are forward looking, the effect of the tax cut was already priced into asset markets. With the GOP unable to put their bill to a vote in the House, the likelihood of those tax cuts becoming effective decreased and prices fell.

Even more important was the implication of the bill’s failure for other legislative priorities. President Trump campaigned on massive tax cuts and infrastructure spending, both forms of fiscal stimulus. The disagreement within the GOP, and President Trump’s inability to negotiate a compromise between the party factions raises questions about his ability to get tax cuts and infrastructure spending passed. Without those the impetus to growth will vanish and expectations of company profits, and dividends, will be revised downward.

Unfortunately, the failure of the healthcare bill and its effect on fiscal stimulus expectations is not the only issue troubling equity bulls. The failure of economic data to keep up with the lofty expectations of consumers and businesses after the election of President Trump has begun to raise eyebrows.

The first graph below shows a large move up in three measures of consumer and small business expectations. The University of Michigan and the Conference Board are consumer surveys and the National Federation of Independent Business surveys small businesses. All three surveys indicate higher expectations after the election and they all have remained elevated through the first two months of 2017. 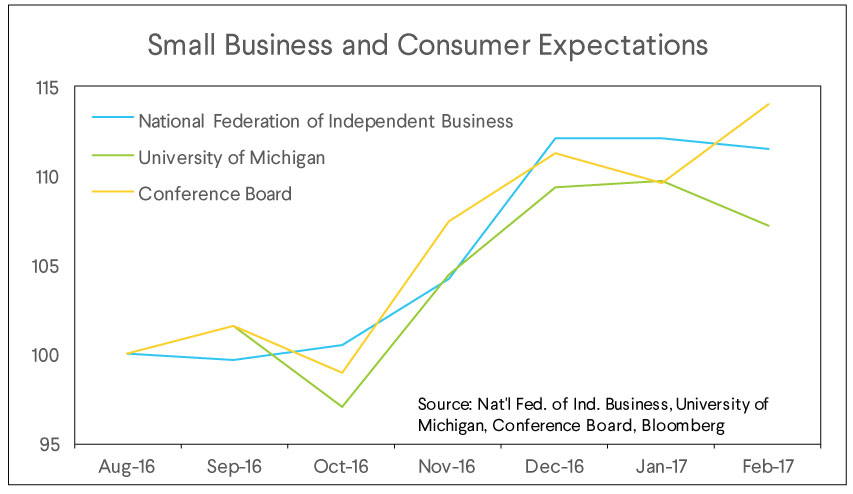 However, real activity—based on data rather than expectations—has remained subdued. The chart below shows the predicted first quarter GDP number output by the Atlanta Fed’s GDPNow model. This model uses data as it comes in week-after-week to “nowcast” real growth. Unlike the picture presented above, forecasted growth has moved significantly lower over January and February. The big question is: will slow growth change expectations or will expectations improve growth? Should optimistic expectations lead consumers to spend more and businesses to invest, then growth will probably accelerate and the market continue to climb. We will look to company earnings and future guidance in the coming weeks to better gauge plans for investment and growth from major U.S. companies.

Not all equities depend on the Trump Trade. While U.S. equities have languished in recent weeks, global equities have done fine. Political risk in the European Union has declined after the defeat of anti-immigration politicians in the Netherlands and diminished prospects for a candidate holding similar views in France. Emerging Market equity has outperformed as lower rates and a lower dollar make corporate debt burdens less onerous in local currency. 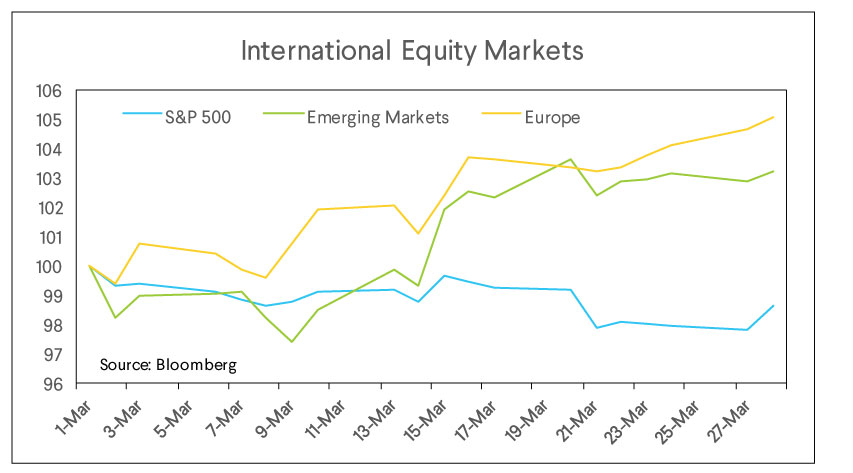 The point here is to remain diversified. In our view, the U.S. continues to offer the best risk-reward for equity and fixed income. However, economic activity and corporate profits are accelerating globally, and their different exposures to U.S. fiscal policy and interest rate moves make international equities a valuable part of a diversified portfolio.