Interest rates have continued to rise while equities tread water as a March rate hike by the Federal Reserve became a certainty. Today the FED raised rates ¼ of one percent or 25 basis points. Attention has now shifted to any information that can be gleaned from Chair Yellen and the rest of the FOMC on the likely pace of hikes for the rest of the year.

Oil prices moved sharply downwards after data showed continued inventory builds and an increase in Saudi production. Economic data from China has continued to give support to equities worldwide, especially emerging markets. We continue to like a globally diversified equity allocation and a short duration bias in fixed income to avoid risks from rising interest rates.

The Federal Open Market Committee met today to set the monetary policy instrument of the United States, the fed funds rate. After comments made last week by several members of the committee and the various regional Fed banks, markets priced a hike as nearly certain to happen and they were right. On everyone’s mind is the continued increase in goods and services prices. In addition to the various official measures of inflation, survey-based measures of prices paid by business show continued acceleration. The chart below shows the results of the prices paid component of the most recent Institute for Supply Management survey. 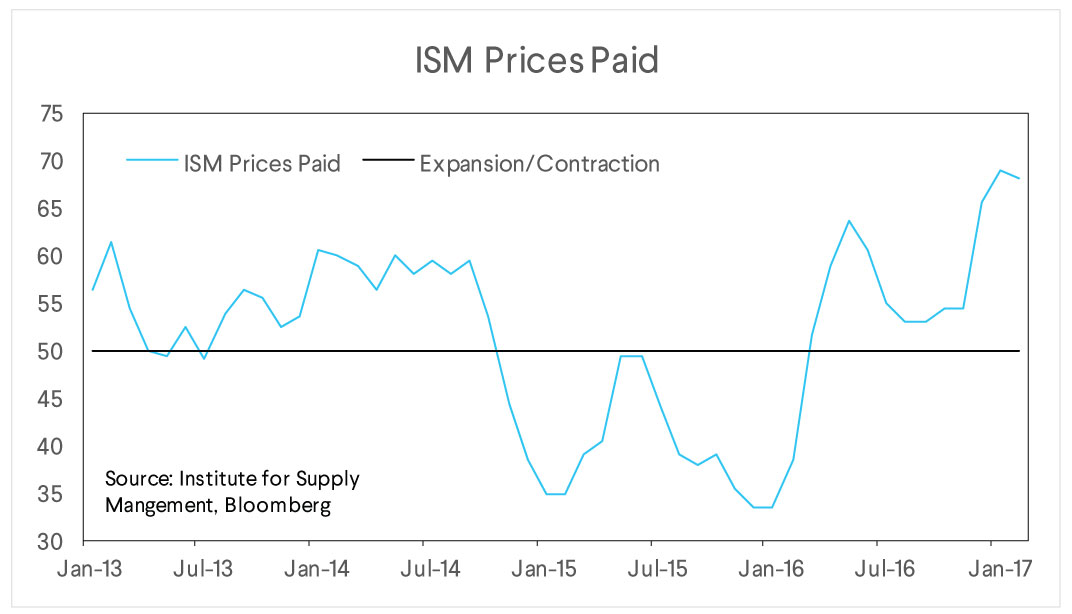 Prices are rising at their fastest rate since 2013. That, and potential fiscal stimulus by the Trump administration, will likely lead to multiple rate hikes in 2017. The question is how many? To predict this, markets will listen closely to the Fed Chair’s comments. Her comments seemed to indicate that this was a “dovish hike” since the Chair said “Even after this increase, monetary policy remains accommodative, thus supporting some further strengthening in the job market, and a sustained return to 2 percent inflation.” This signals a willingness to tolerate inflation running above target for a period of time and fewer rate hikes. A “hawkish hike” would have made reference to continued price pressures in the economy and would suggest to markets that we could see 3 or even 4 hikes over the course of the year. Near term, with dovish signals from the fed economic data continuing to strengthen, the case for equities remains compelling.

Oil prices have fallen over 10% in the last couple weeks. The fall has been attributed to several large inventory builds in the United States and a production increase by Saudi Arabia. We can see below that commercial inventories have continued to rise from their already high level. 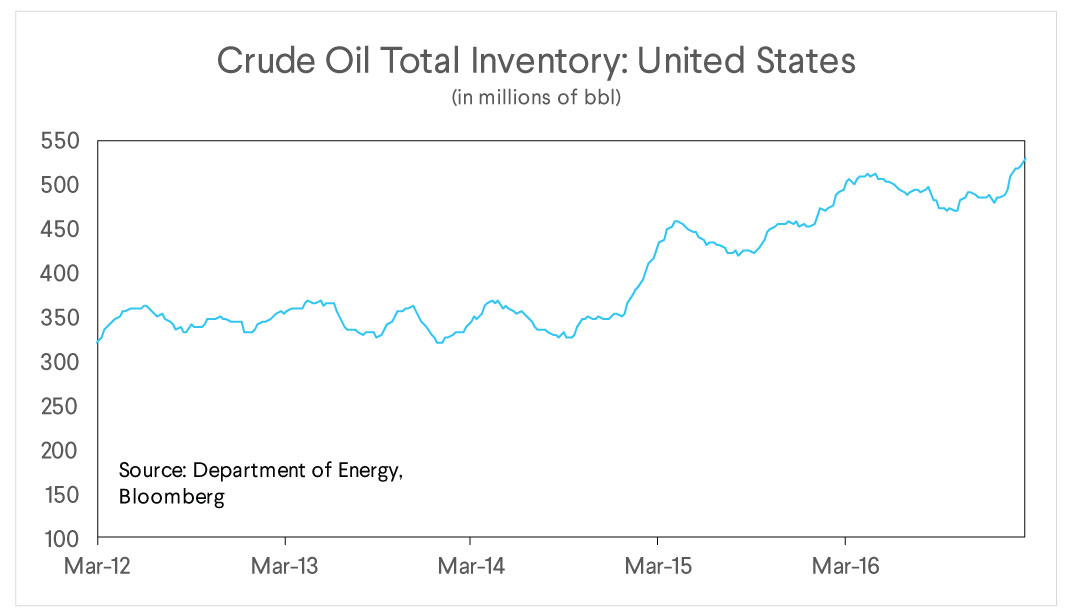 The problem with this narrative is that inventories were already expected to grow for much of 2017, and demand growth would catch up later. Similarly, while it is true that Saudi Arabia increased production, they are still below the level of production they had agreed to as part of the OPEC deal reached late last year. While the case for oil above $60 is tenuous, we think the recent weakness will be short lived and a $50-$60 range hold for much of the year.

Part of the reason we remain somewhat sanguine on oil prices is the economic performance of China. China is a large oil consumer and as economic activity there continues to stabilize it is positive for oil prices. After fears of large-scale capital flight and a financial crisis last year, government intervention has calmed local markets and activity has responded.

The chart below shows year-over-year growth in Chinese imports. We can clearly see the large decline in trade during the 2008 Global Financial Crisis and sharp rebound thereafter. What is interesting to note is the long, slow decline in import growth as overall economic growth slowed. This year, however, has seen an acceleration in import growth. Not only is this an indicator of the improving health of China, it also reflects health in world trade and is a positive sign for export-led emerging markets. 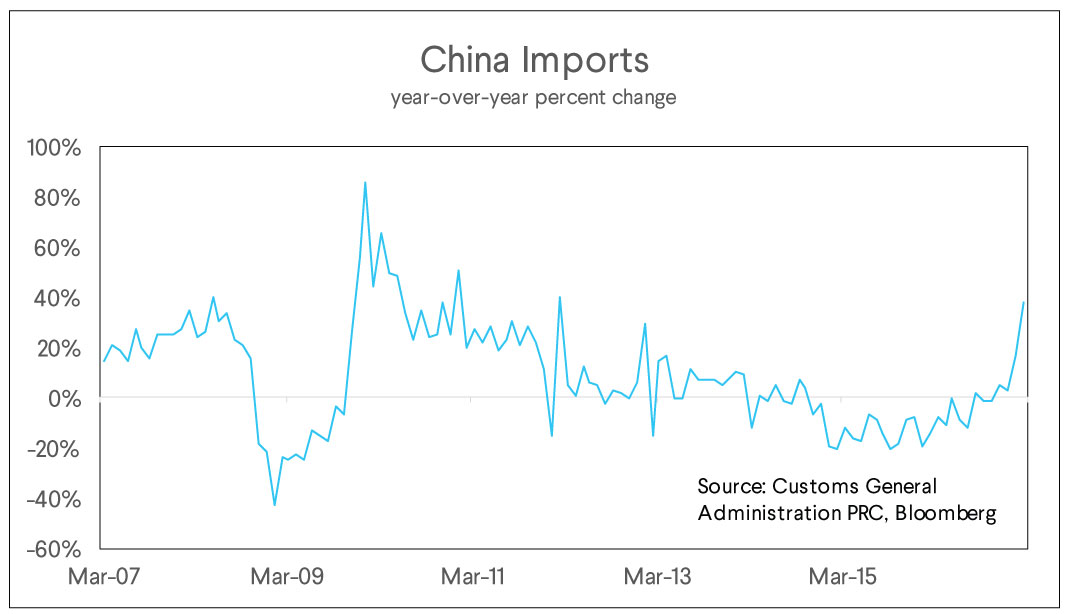 Other measures of economic activity in China look strong as well. The most recent release of the Caixin China Purchasing Managers’ Index, shows the index at levels above those seen for all of 2014 and 2015. This indicates not only global economic growth but also greater risk appetite. How the Chinese authorities would deal with slowing growth and high levels of debt was a huge source of uncertainty weighing on markets. With many indicators of growth strengthening, the possibility of a so-called hard landing is looking less relevant. 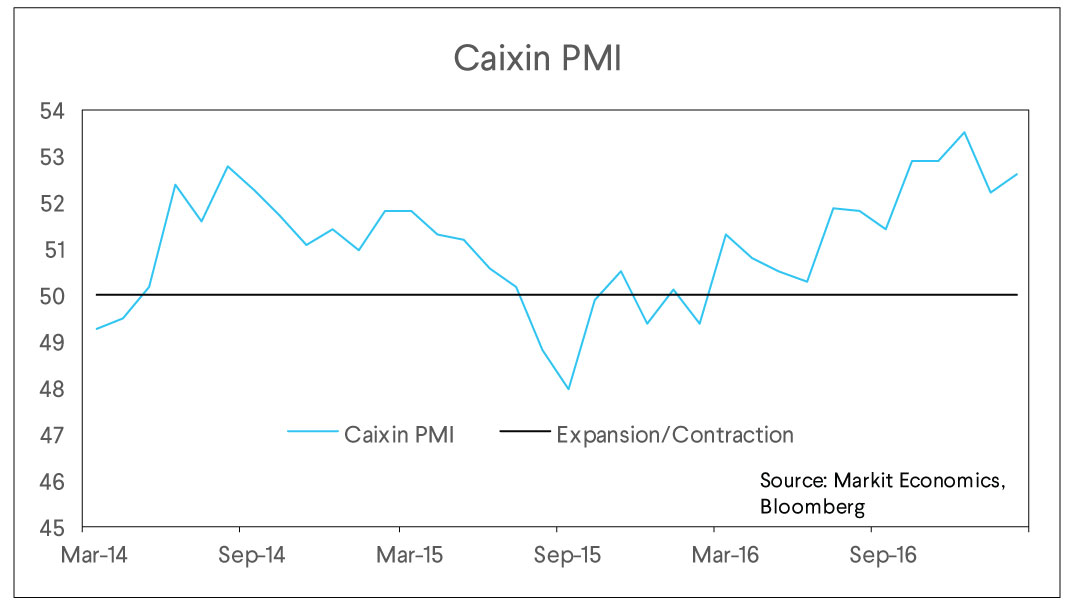 With a strong and stable China and oil prices unlikely to test 2015 lows, we think emerging markets will continue to perform well, even in the face of a hawkish Fed. We like emerging market exposure as part of a globally diversified set of equities. We think interest rates will continue to drift higher, and as such are wary of longer-duration fixed income assets. Risks remain in the near term of political uncertainty in Europe and high expectations for fiscal stimulus in the U.S. Still, underlying data continues to look good and we see little reason to reduce equity exposure at this time.