U.S. Equity markets were down slightly last week, shrugging off a bond market selloff in China, increased geopolitical uncertainty, and the expected increase in the federal funds rate. Ten-year Treasury yields were higher on the week and the dollar continued to rally against the euro and yen, hurting dollar returns in global equity indices.

The Fed raised the target range for the Federal Funds rate by 25 basis points, a move widely expected by market participants. We and the market interpreted the “words and dots” surrounding the rate increase as indicating that the Fed would raise interest rates next year more rapidly than has been priced in to long-term interest rates. As a result, yields spiked up across the maturity spectrum with sharper jumps in the shorter maturities. We can see the effect of the announcement on the 5-year Treasury yield in the chart below. 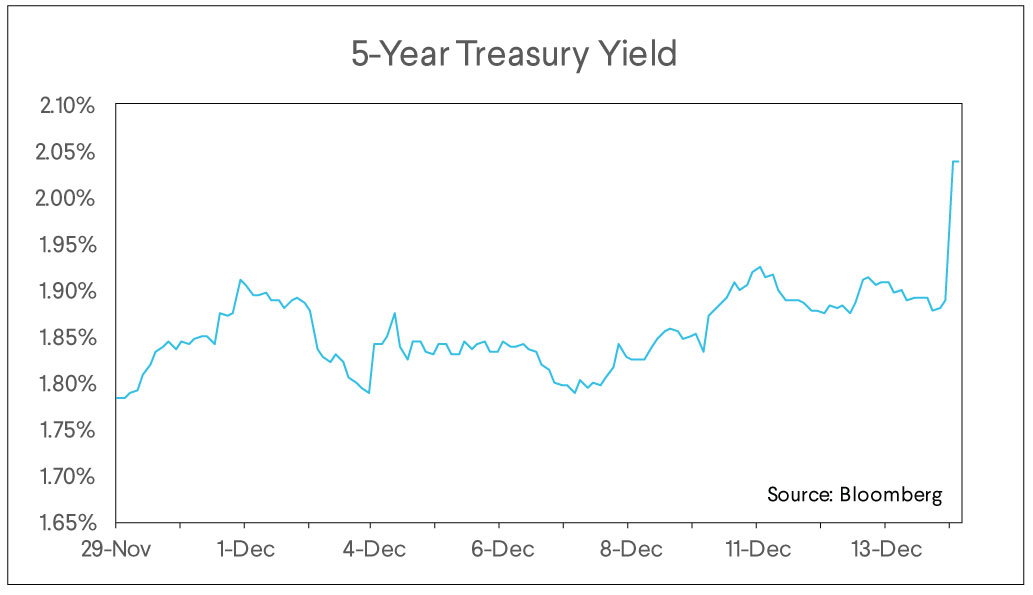 The “dots” are FOMC members’ forecasts of the Fed Funds rate. They are forecasts because even FOMC members do not know what the FOMC will do at future meetings. Still, by taking the median of these member forecasts, one can estimate the path of interest rates expected by the people who decide monetary policy. Of course some caveats apply. The dots are anonymous and taking the median forecast treats all FOMC members as equally important, which isn’t true. Some dots belong to FOMC members that won’t be voting this year or next. More important, the views of Chair Yellen, Vice-chair Fischer, and New York Bank President Dudley carry significantly more weight than those of other FOMC members.

Still, markets use the information available, and the dots are available. The chart below shows the median of the dots from Wednesday’s meeting as well as the last release in late September. The third line on the chart shows expectations of the Fed Funds rate as derived from market prices at the time of Wednesday’s meeting. 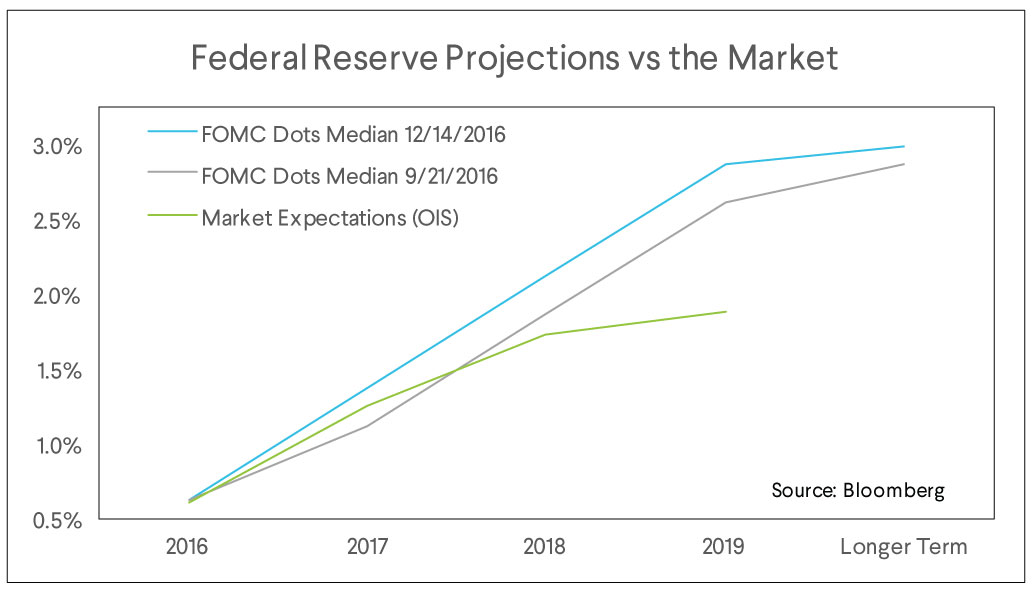 There are two notable things on this graph. First, the Fed has become more hawkish, with three rate hikes expected in 2017 versus the 2 hikes over the same period forecast at the last meeting. Second, the market expects fewer hikes than expected by the median FOMC member over the next several years.

It was this more hawkish view (reiterated by Chair Yellen during the press conference) that pushed bond yields and the dollar up while sending stocks lower. Why do they expect a higher Fed Funds rate than before? Because, on balance, price pressures continue to remain strong. The upward trend in producer prices is apparent in the following chart. It is one of many measures of inflation moving towards the Fed’s 2% target. 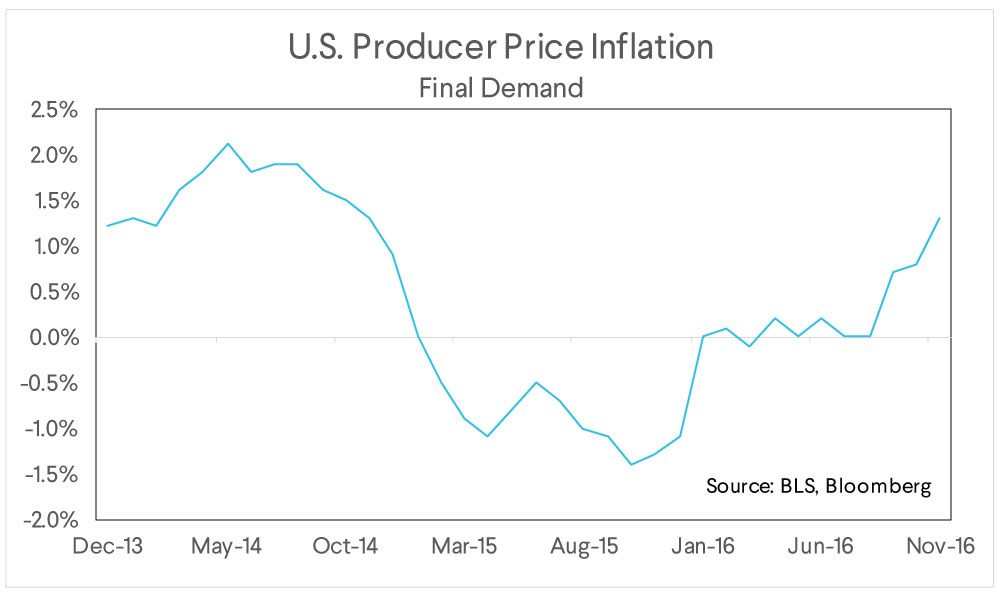 The current gap between the market’s and Fed’s expectations is troubling. If inflation data continues to come in strong, it is likely that the market’s view will converge with the Fed’s. If that happens quickly it will introduce even more upward pressure on interest rates and volatility to equity and currency markets.

Is the Market Too Optimistic? Is it possible the Fed’s forecast may converge to the market’s instead? After all, the Fed expected to hike rates 4 times in 2016 ended up hiking once. We find that unlikely, but this week was a reminder that expectations can get ahead of the data. The Consumer Price Index less food and energy has undershot year-over-year growth relative to expectations for the second month in a row. 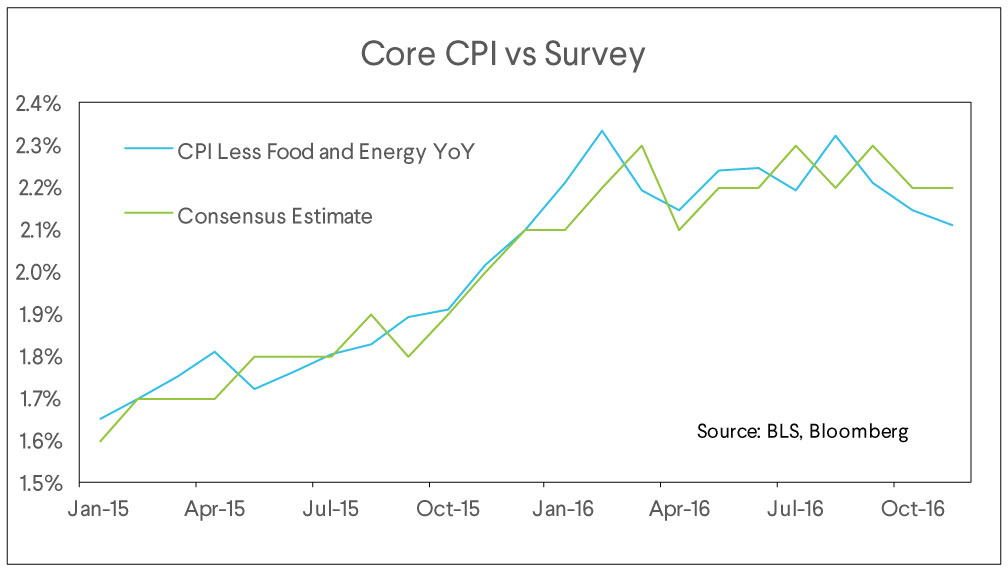 Retail sales also undershot expectations this week. Month-over-month growth came in at 0.1% versus the consensus estimate of 0.3%, and last month’s data was revised down slightly. While the monthly numbers were not great, it is often worthwhile to look at the year-over-year numbers. While we can clearly see the recent (slight) deceleration in retail sales growth, the chart below shows that retail sales growth is significantly faster than it has been since the beginning of 2015. 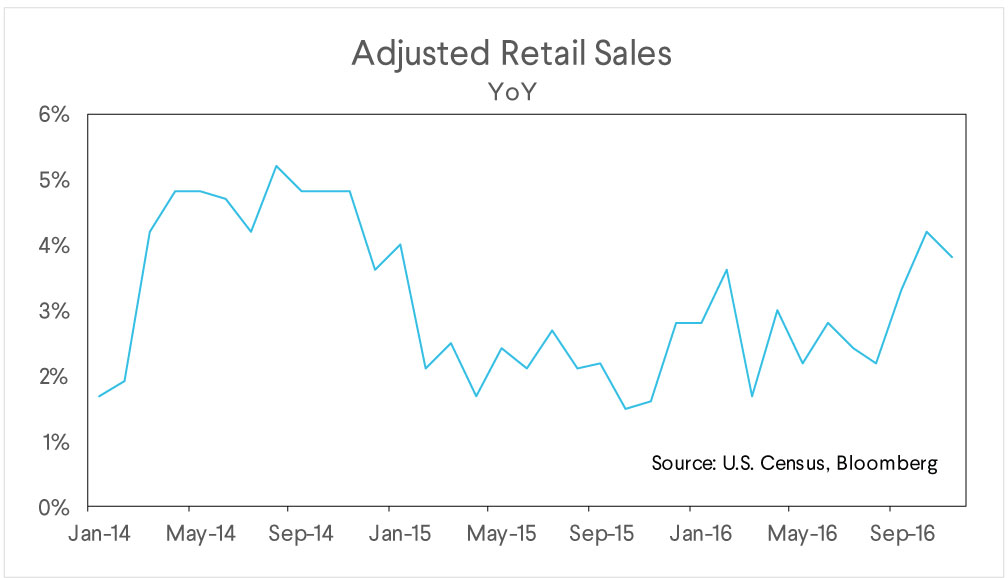 The preliminary release of the Markit Purchasing Manager’s Indices also showed a loss of momentum in recent months. We can see that the Services PMI has turned down and the trajectory of the Manufacturing PMI looks to be flattening. However, these numbers are hardly “bad”. Both the Services and Manufacturing sector survey indices are well above 50 and thus well into expansion territory. 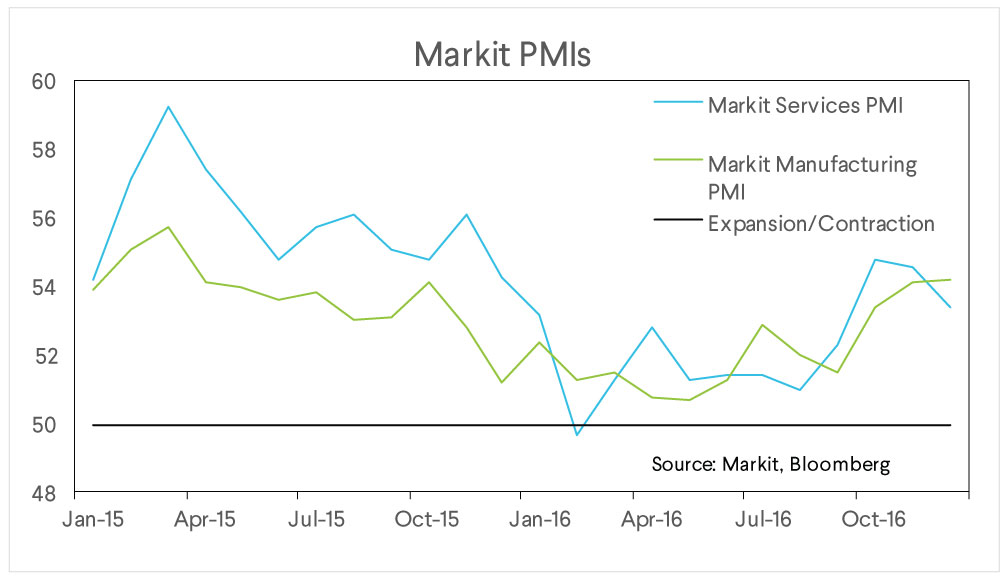 The data may have undershot expectations this week, but the U.S. economy continues to look strong. We think inflation will continue to remain at or above the Fed’s 2% target and expect several rate hikes in 2017. Because of the effect of these hikes on longer term interest rates (higher) and the dollar (stronger), we remain underweight long duration fixed income and have hedged the foreign exchange exposure on much of our international equity holdings.