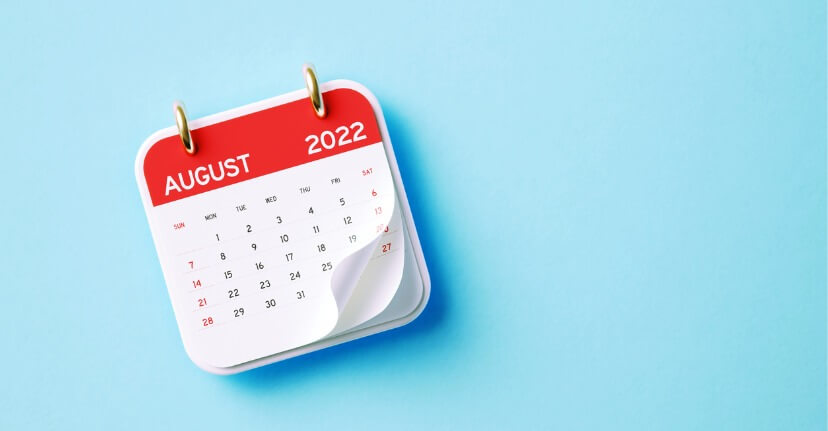 Asset returns were broadly negative during the seasonally low volume month of August. The Federal Reserve reiterated its commitment to fighting inflation and restoring price stability, despite the economic pain it may bring. Interest rates moved higher throughout the month, as market expectations shifted toward a higher-for-longer federal funds rate. However, economic data suggested a step down in inflationary pressures, both on the consumer & producer side, leading many to believe peak inflation is in the rearview mirror. The strong Q2 earnings season indicates that fears of the economy being currently in a recession are thus far overblown, though earnings estimates for 2023 have started to be revised downward.

•  Powell reiterated the Fed’s resolve to restore price stability at Jackson Hole, warning that it will likely result in some economic pain.

•  The Q2 EPS surprise rate was +5.5%, with Energy & defensive sectors beating estimates by a higher degree than their cyclical counterparts

•  International developed markets were weighed down by Europe, as energy prices continue to bruise the region’s economic prospects.

•  Treasury yields rose 40-60bps across the curve in Aug, as markets priced in the Fed’s hawkish message.

•  Yields between 1 & 7 years rose more than longer-term (10 years and beyond) yields, reflecting an interest rate regime that could keep rates elevated.

•  Jul’s credit spread narrowing continued in the first half of Aug, with HY spreads declining to 4.57% on Aug 11 before widening out and ending the month at 5.22%. 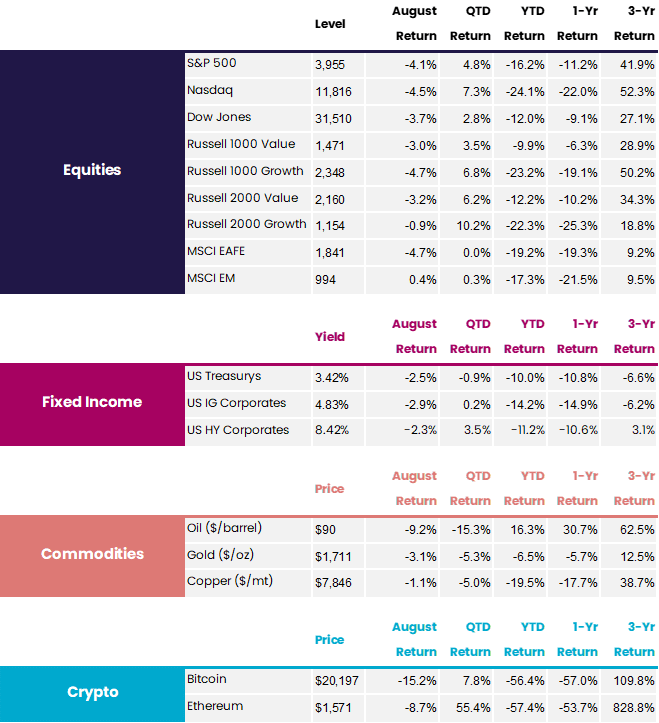 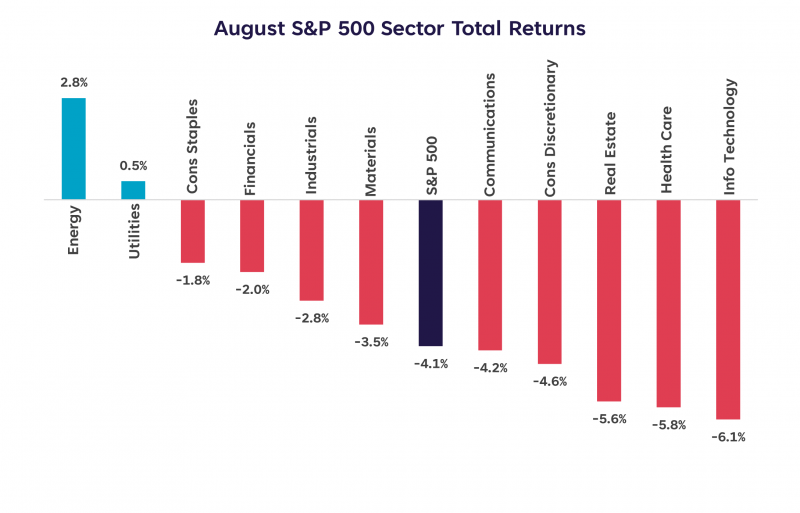 Meme Stocks In Vogue Once Again

After taking a backseat to macro headlines, some of the meme stocks came back in vogue. For instance, while volume in AMC picked up, volume in the original meme stock darling GameStop did not. What really drove the surge in volume, though, was Bed Bath & Beyond (BBBY).

BBBY short interest as a % of floating shares surged from 18% at the end of Mar to over 43% by the end of Jul. Stocks with higher short interest tend to be more susceptible to short squeezes, which can exacerbate the move in price as short positions need to be covered. This has been the phenomenon in multiple meme stocks and BBBY was no exception in August.

Average daily volume of BBBY shares surged to 98 million in Aug, which is more than the number of shares outstanding and ~12x the average daily volume in the prior seven months. Just like other hyperbolic trends though, the fall can be as quick as the rise—the stock is down 59% since Aug 17, though it remains 89% above where it began the month. 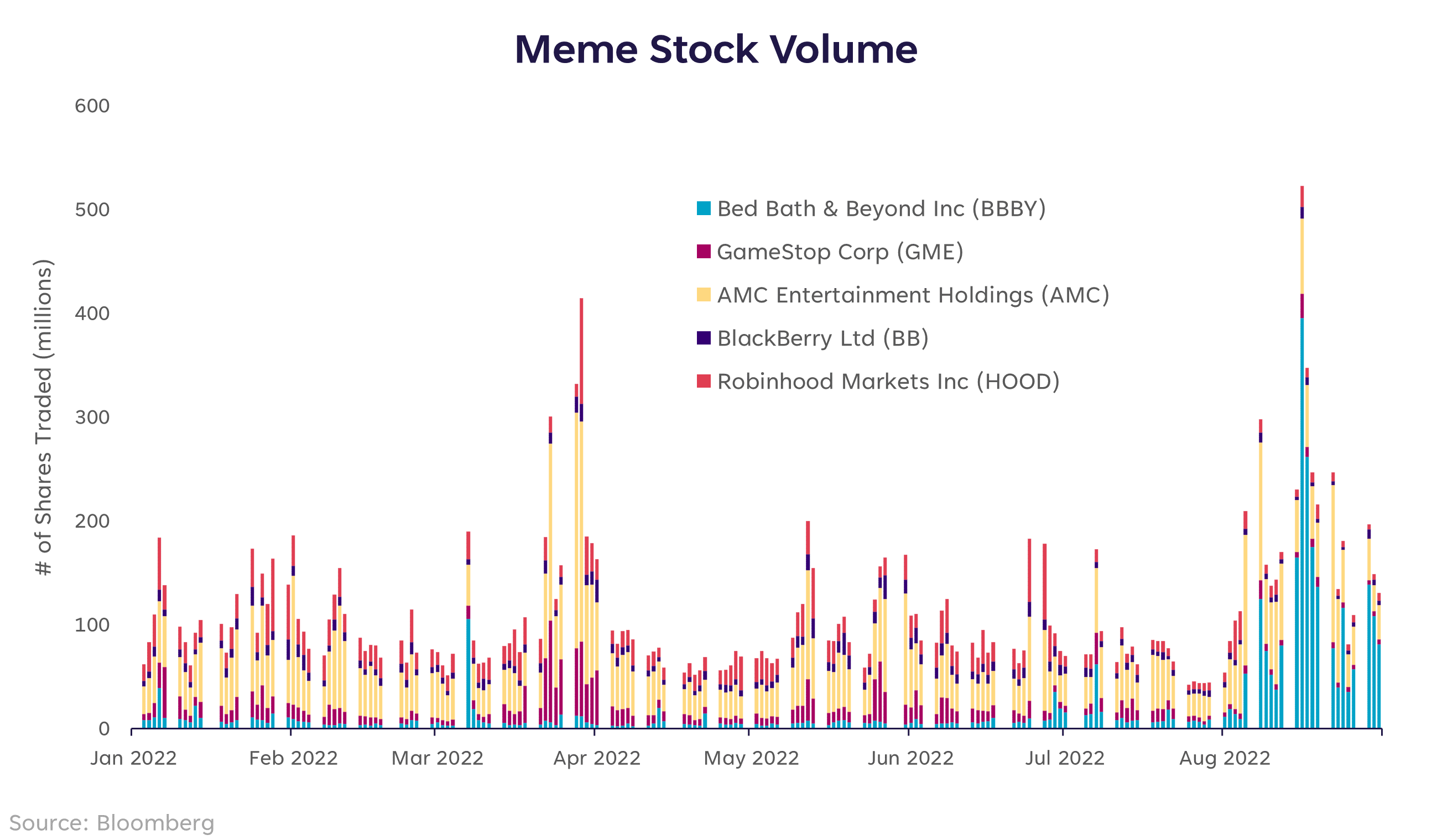 On Aug 16, the Inflation Reduction Act (IRA) was signed into law. According to the Penn Wharton Budget Model (PWBM), it is projected to reduce the deficit by $264 billion through 2031. However, the deficit reduction doesn’t happen steadily throughout the period. In fact, it’s projected to somewhat increase the deficit through 2026 because of increased costs of ACA subsidy extensions & climate/energy-related spending. Major revenue raisers such as drug pricing reform & IRS enforcement revenue don’t ramp up until the latter half of the 10-year period.

Because this is a long-term investment & deficit reduction package, it’s unlikely to have much of an impact in the short-term. The PWBM projects that GDP will be 0.1% lower than the previous baseline through 2031, due mostly to debt reduction and the changes to tax policy. They also find that it would have no significant effect on inflation in the short-term, but that inflation would be 0.1% lower midway through the 10-year period. 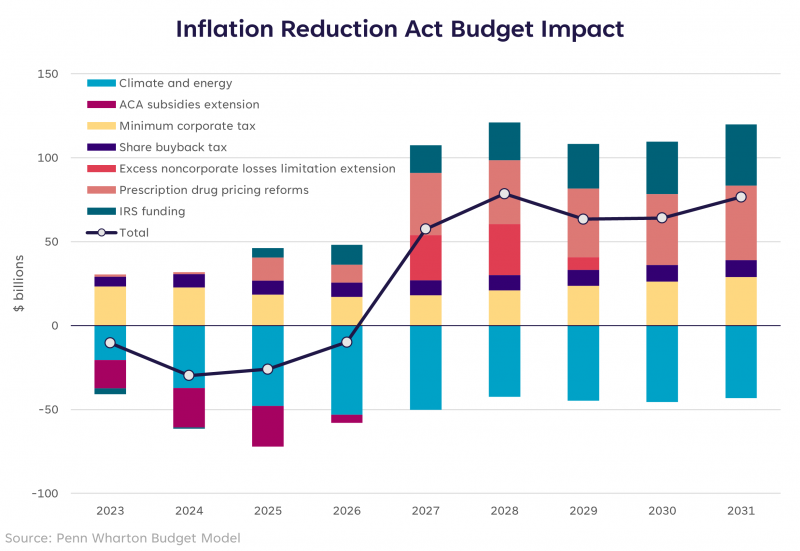