An Income Based Panacea? Think Again.

Much has been written about the new income based repayment (IBR) rules the President recently signed into law. Notably, maximum payments on qualifying federal loans are now capped at 10% of disposable income rather than 15% before, and after 20-years, any remaining balances are forgiven, versus 25-years before.

The New America foundation has said this program translates to a “free pass” for MBA and law students – high earners with lots of debt. Further, they feel such a “free pass” will allow such graduate schools to charge even more for tuition, perpetuating an already broken system.

While we agree that the federal loan program is the single greatest culprit to spiraling tuition costs, and that the best thing the government can do to reign in costs and manage debt loads is to eliminate the egregious PLUS loan, we do not see the new IBR as being advantageous to high income, high debt graduates.  In fact, we would argue most MBAs are better off not electing to use IBR, and the Department of Education does little to explain this phenomenon, potentially leading many borrowers into a poor economic decision. Here’s why.

With IBR, while individual payments might be less, lifetime payments can be more. This is because electing IBR can extend loan repayment periods out to 20 years.

Take an individual who is going to pay down a loan in 15 years with payments of $800 per month. Now assume they elect to use IBR, and their payments drop to $750 per month. Big win, right?!  Well, what if the loan maturity extends to 20 years?

They end up making $180,000 in total payments, versus $144,000 with their original loan. And that ignores any tax on the principal they are forgiven in year 20. This is the pitfall of IBR – at certain debt and income levels, even if one is eligible, they are better off economically not electing to use IBR if they can afford their current payments.

The following chart illustrates this phenomenon. For starting salary/graduating debt combinations above the line, our borrower is better off not electing IBR. For example, with $150,000 in debt, their indifference point for electing/not electing IBR is a salary of $94,000. If they earn more, they shouldn’t elect; if less, they should. Given our experience that most MBA and law school graduates we refinance have about $100,000 in debt and salaries over $100,000, they wouldn’t be good candidates for IBR. 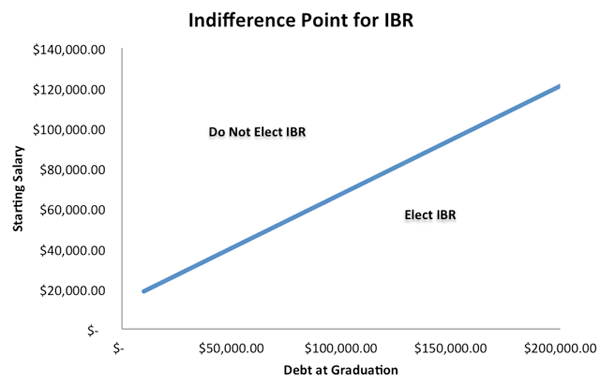 To build this chart, we had to calculate the break-even point between electing IBR and continuing with the current loan terms. We assumed the borrower’s non-IBR option was to refinance with SoFi at 5.99%. IBR caps payments at 10% of disposable income, defined as adjusted gross income (AGI) less the poverty line. AGI causes some headaches in IBR calculators, because interest on educational loans is one of the AGI deductions. To make things simple, we assumed the borrower is single, with deductions of $5,800 toward income to get to AGI. The poverty line for this individual is $11,170. We further assumed that the individual’s income grows by 3% per year.

While the new IBR rules might help borrowers with lots of debt and relatively poor career prospects, it isn’t a panacea for MBA and law students who are graduating with six digit debt loads – but six digit salaries. Rather, this policy enables schools to continue to overcharge for low-value degrees. Further, the Department of Education does little to explain when electing IBR is a bad idea, potentially leading many borrowers into the wrong economic decision. We continue to believe that eliminating the higher rate federal PLUS loan would have a much more significant impact on both tuition costs and debt burdens.