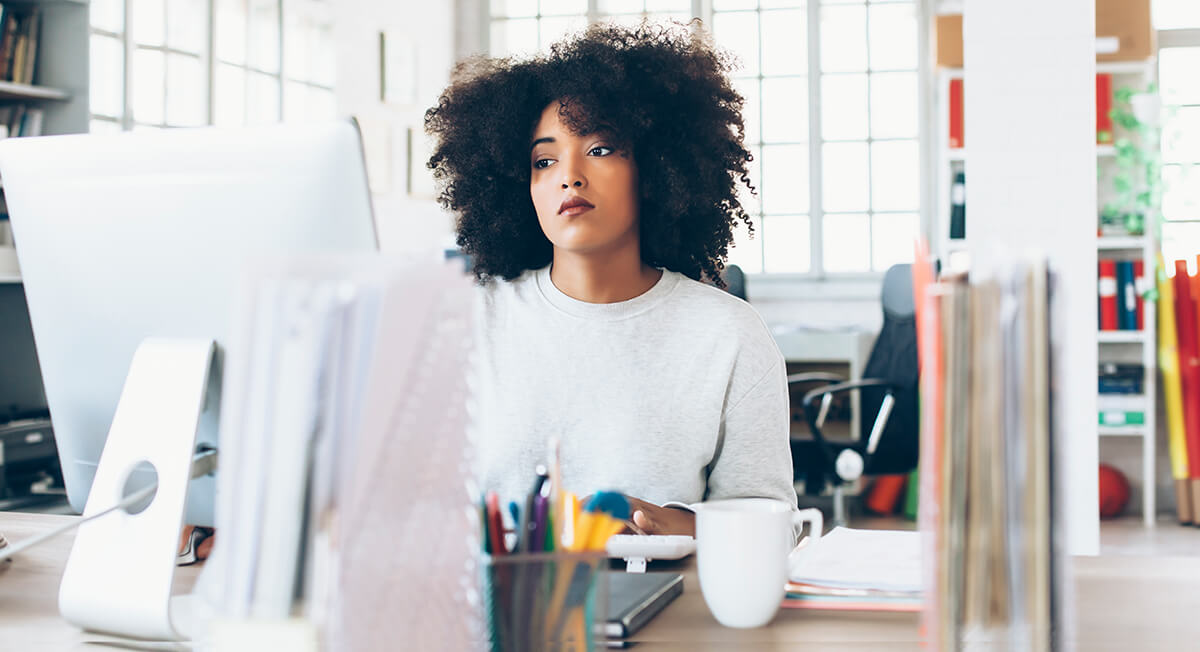 If you’re groaning because your boss just gave you yet another pointless assignment with an unreasonable deadline, you might think, “My job sucks, but all jobs do. Work is work, so I better just deal with it.”

And sure, every job has its downsides. But how do you know when things are getting so bad that it’s time to quit?

One major red flag is when the work doesn’t matter to you at all. “Fundamentally, we’re wired for meaning. When we are in a role that isn’t aligned with things that we really care about or the things that we’re really good at, we suffer,” says Valerie Olson, Senior Career Coach at SoFi.

Another is realizing that your dissatisfaction at work is making you sad, irritable, or angry, not only at the office—but also at home. “Work bleeds into the rest of your life. If you’re unhappy during the day, it’s going to impact your friendships and your relationships,” says Alexandra Dickinson, Member Strategy Lead at SoFi.

Sound familiar? Check out these six other subtle signs from Olson and Dickinson that it’s time to start job-hunting.

1. You get the Sunday scaries.

Monday morning rolls around… and you just can’t drag yourself out of bed. Maybe it’s because you’re staying up late on Sunday nights because you really don’t want to go to bed and face the week, or maybe you’re coping with your feelings by drinking too much or overeating. And while everyone feels the end-of-weekend blues once in a while, take note when it starts becoming the rule, not the exception.

2. You look and feel awful.

“Maybe you have dark circles under your eyes, you’re starting to break out, or you’re not sleeping well,” says Dickinson. “Or you have a general feeling that something’s off.” Dealing with chronic stress can lead to health problems like headaches, stomach aches, or fatigue, so physical symptoms are often a telltale sign that there’s another problem.

“If you’ve memorized every meme on the Internet and you’ve seen every post on Instagram—including all the Stories—because you have nothing better to do, then you’re out of challenges,” says Dickinson. Or perhaps you’re procrastinating because you don’t like what you do. Either way, it may be time for a new opportunity.

Maybe you have great ideas that may help move the company forward, but nobody will take you seriously. Or maybe you just found out that your colleague—who has the same job title and does the same amount of work—makes a lot more money. Sure, some frustration is part of office life, but it’s not a good sign if you find yourself venting about this stuff to your best bud or significant other every time you talk.

5. Your work is suffering.

“Sometimes, because they’re afraid to change and leave, people will subconsciously do work that’s not up to par so they can accidentally be fired,” says Olson. “I’ve seen that happen more times than you would think.” If you find yourself starting to come in late, sitting back instead of contributing ideas at meetings, or just not giving your usual 100%, pay attention to that.

6. You don’t like your company’s culture—and it’s not going to change.

You like to keep to yourself, but you work in an office that starts partying at 4pm each weekday. Or maybe you can’t stand not having your own workspace or the number of meetings on your calendar. There are lots of things in a work environment that can drive you crazy. “Sometimes it can feel like an uphill battle if it’s the whole culture and you’re just one person who doesn’t fit into it. You may think: Is it worth trying to change it?” says Dickinson. She’s seen people have luck—for example, joining a culture committee or negotiating flex time in office where that wasn’t the norm—so it’s always worth asking, she adds. But if it’s just not happening, it’s time to look elsewhere.

Still not sure whether it’s time to quit?

Olson suggests asking yourself: How fulfilled are you by your career, on a scale from 1 to 10 (with 1 being not at all fulfilled and 10 being totally fulfilled)? Answer that in your head before you read the next paragraph.

“Normally what we find is that people who are at an 8 or above are generally pretty happy with where they are with their current situation,” she says. If yours is below an 8, she recommends asking a follow-up question: What would make it a 10? Think hard about this and be specific. Additional income? More paid vacation time? More varied responsibilities? Moving into a management role? Working one day a week at home? Traveling more or less? It’s worth considering whether some changes could improve the situation.

In many situations, though, you may realize that it’s time to move on. In that case? “The next step is taking a deep breath and being strategic,” says Olson. Do industry research online and start having confidential conversations with others in your network to gather information about other jobs that appeal to you. “Take time to think about it, instead of having it be a desperate move,” she adds.

“The ideal scenario is that you’re running to something, as opposed to running away from something,” says Dickinson. Know where you’re going before you leave. “A lot of times I see people saying…I hate this job, I can’t wait to get out of here, I’ll take anything—and then they wind up going somewhere else that’s not even better.”

Most importantly, once you’ve figured out what’s missing in your current job, get excited about the new opportunities that await you. “Most of the time, when we talk to people, we’re helping position them for something better. Even if they’re in a situation that looks bleak, we help them see that the next day, there’s sunshine in the morning,” says Olson.

Job changes are stressful, but you don’t have to go it alone. If you’re a SoFi member, sign up for a complimentary one on one session with a career advisor, who can help you plot your next move. Not a SoFi member yet? Head to SoFi.com to learn more.

If you’re unhappy in your current job, you’re not alone. Nearly 71% of people are currently looking for a new job.