Heads Up: The Fed continues to raise rates — up 3% this year — making credit card debt even costlier. Pay it off today with a low fixed-rate personal loan. View your rate —>

Dogecoin (DOGE) — the infamous meme coin that launched in 2013 — has had a wild history of price fluctuations. At one point, it was worth a fraction of a penny, but then saw a “to the moon” moment where it peaked at an all-time high of about 74 cents in May of 2021.

Based on a viral internet meme of a Japanese Shiba Inu dog, Dogecoin (pronounced “dohj”) was created by two software engineers, Billy Marcus and Jackson Palmer, in 2013. The coin has never been worth even one dollar.

Doge was originally designed to be a simple blockchain-based payment system. However, it quickly attracted a large number of supporters who developed new use cases for it, including a third-party tipping service bot called “DogeTipBot” that interfaced with Reddit, where users could send tips for content posted on the site.

The code for Dogecoin is based on Litecoin, and uses scrypt technology. That scrypt technology set it apart from other kinds of cryptocurrency, including Bitcoin, which uses a different proof-of-work algorithm called SHA-256.

Essentially, Dogecoin’s code allows for an unlimited supply of dogecoins, which has contributed to its historically low price.

This makes Dogecoin a so-called “inflationary coin,” whereas Bitcoin and similar cryptocurrencies are considered deflationary, because there’s a fixed limit to the number of coins miners can create. Dogecoin launched with a total supply limit, similar to Bitcoin’s total coin limit, but the Doge supply is no longer capped. Plus, anyone can begin mining Doge immediately.

The price of Doge picked up in popularity over the years, with prices rising and dipping in 2017, and then hitting a peak in 2018 from bullish investors’ support. The cryptocurrency reached another level, however, when Tesla CEO Elon Musk and some other celebrities began tweeting about Doge at the start of 2021. 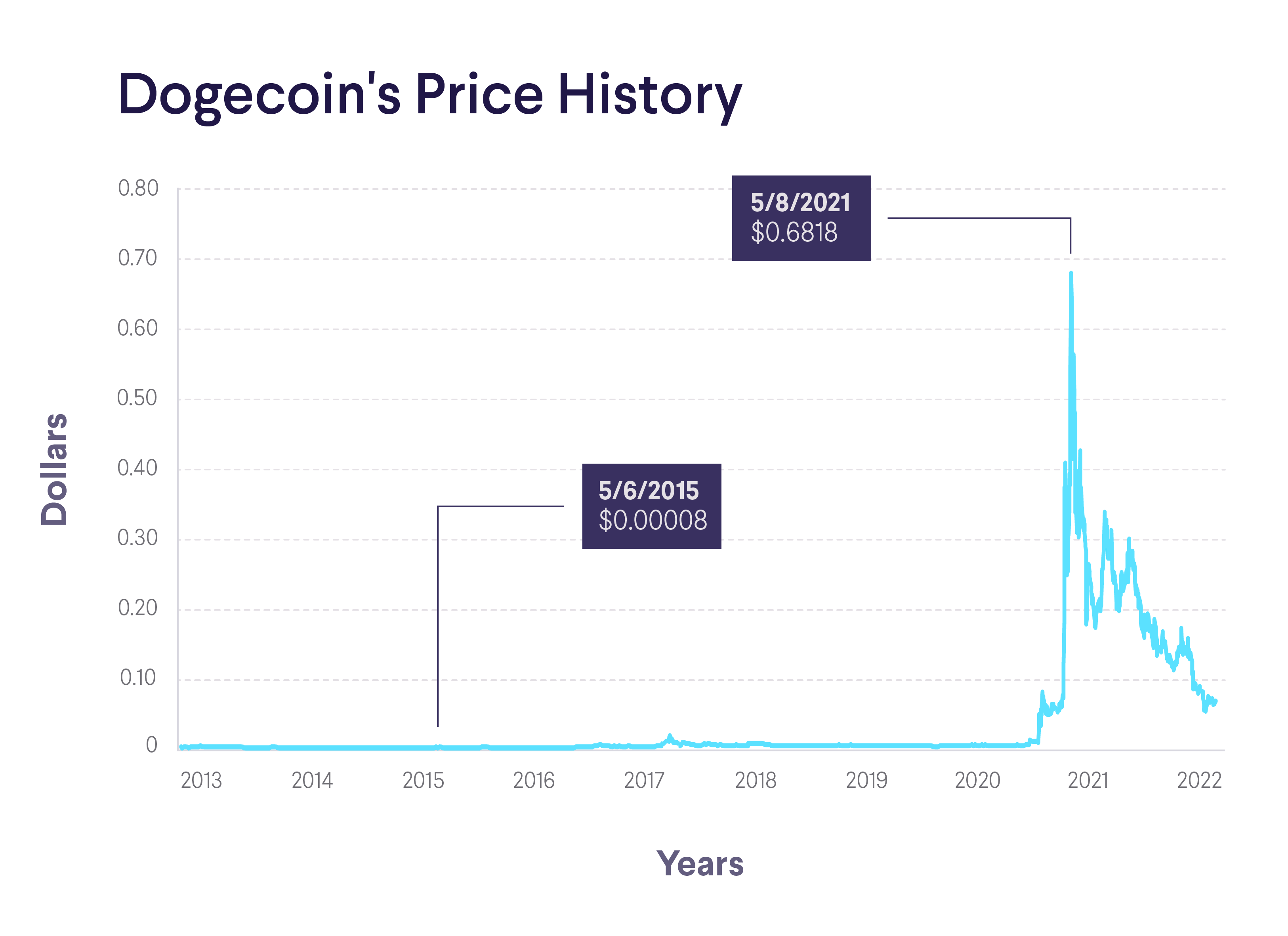 On December 15, 2013, Doge was first traded on cryptocurrency exchanges at a price of $0.00. The currency became popular among crypto users, and two weeks after its launch, the r/Dogecoin Reddit channel started attracting thousands of users and contributors.

In 2014, the Doge community also used the currency to donate more than $170,000 in Doge to charitable organizations, including the Dogecoin community’s 2014 donation of 27 million Dogecoins (roughly $30,000 at the time) to help the Jamaican bobsled team compete at the Sochi Winter Olympic games.

The token did not see major price hikes until March 2017, when Doge’s price rose by 1,494%. Then, bullish investors began taking interest in Doge in November of 2017 when the price rose again.

That January 2018, Doge prices rose again and reached another peak, at $0.018. Dogecoin’s market capitalization broke $1 billion around that time. For the following two years, however, Doge had low trading activity.

Dogecoin Price in 2022: Settling Down

Considerations When Investing in Dogecoin

There are a few considerations to keep in mind when investing in Dogecoin. While the coin has seen some incredible peaks and troughs, Doge has never been worth more than a dollar. There’s an unlimited supply of Dogecoin, which means that the value relies on buyers constantly buying new Doge that enters circulation.

There may be higher security risks with Doge because it hasn’t had the same level of code security or scrutiny that many other currencies have had. That goes back to the fact that it initially wasn’t treated as a serious cryptocurrency.

Another consideration is that holdings are becoming increasingly concentrated (much like with other crypto assets) — in fact, nine wallets hold more than 40% of all Dogecoin, one of which holds close to 30%. That means that those investors have a heavy hand on how the price could potentially change — they could cash out and the price of Doge would fall, or they could use their large position to manipulate the price of Doge.

The entities with large holdings that could potentially move the markets are often called “whales.”

For a currency that started at $0.00, its lowest price, Doge has had a remarkable journey. Its most exciting phases include the tipping service DogeTipBot and Musk’s public support of the currency, which caused its peak price of $0.74 and a 9,884% increase within five months in 2021.

Investing in Doge comes with its risks, however, and the future of Dogecoin remains unpredictable and volatile. Still, if you’re interested in trading crypto, one way is to set up an Active Invest account with SoFi Invest. From there you can open a crypto trading account in minutes, and trade dozens of different crypto 24/7. SoFi does not offer staking or a crypto wallet.

SoFi Invest®
The information provided is not meant to provide investment or financial advice. Also, past performance is no guarantee of future results.
Investment decisions should be based on an individual’s specific financial needs, goals, and risk profile. SoFi can’t guarantee future financial performance. Advisory services offered through SoFi Wealth, LLC. SoFi Securities, LLC, member FINRA / SIPC . SoFi Invest refers to the three investment and trading platforms operated by Social Finance, Inc. and its affiliates (described below). Individual customer accounts may be subject to the terms applicable to one or more of the platforms below.
1) Automated Investing—The Automated Investing platform is owned by SoFi Wealth LLC, an SEC registered investment advisor (“Sofi Wealth“). Brokerage services are provided to SoFi Wealth LLC by SoFi Securities LLC, an affiliated SEC registered broker dealer and member FINRA/SIPC, (“Sofi Securities).
2) Active Investing—The Active Investing platform is owned by SoFi Securities LLC. Clearing and custody of all securities are provided by APEX Clearing Corporation.
3) Cryptocurrency is offered by SoFi Digital Assets, LLC, a FinCEN registered Money Service Business.
For additional disclosures related to the SoFi Invest platforms described above, including state licensure of Sofi Digital Assets, LLC, please visit www.sofi.com/legal. Neither the Investment Advisor Representatives of SoFi Wealth, nor the Registered Representatives of SoFi Securities are compensated for the sale of any product or service sold through any SoFi Invest platform. Information related to lending products contained herein should not be construed as an offer or prequalification for any loan product offered by SoFi Bank, N.A.
Crypto: Bitcoin and other cryptocurrencies aren’t endorsed or guaranteed by any government, are volatile, and involve a high degree of risk. Consumer protection and securities laws don’t regulate cryptocurrencies to the same degree as traditional brokerage and investment products. Research and knowledge are essential prerequisites before engaging with any cryptocurrency. US regulators, including FINRA , the SEC , and the CFPB , have issued public advisories concerning digital asset risk. Cryptocurrency purchases should not be made with funds drawn from financial products including student loans, personal loans, mortgage refinancing, savings, retirement funds or traditional investments. Limitations apply to trading certain crypto assets and may not be available to residents of all states.
2Terms and conditions apply. Earn a bonus (as described below) when you open a new SoFi Digital Assets LLC account and buy at least $50 worth of any cryptocurrency within 7 days. The offer only applies to new crypto accounts, is limited to one per person, and expires on December 31, 2023. Once conditions are met and the account is opened, you will receive your bonus within 7 days. SoFi reserves the right to change or terminate the offer at any time without notice.

See what SoFi can do for you and your finances.

Select a product below and get your rate in just minutes.

✝ To check the rates and terms you qualify for, SoFi conducts a soft credit pull that will not affect your credit score. However, if you choose a product and continue your application, we will request your full credit report from one or more consumer reporting agencies, which is considered a hard credit pull and may affect your credit.

* SoFi Lending $10 Check Your Rate on a Personal Loan or Student Loan Refinance Promotion (“Promotion”): The Promotion is offered by SoFi Lending Corp. or an affiliate (dba SoFi). SoFi reserves the right to change or terminate this Promotion at any time with or without notice to you. No purchase necessary to participate. Additional terms and conditions may apply. Promotion is void where prohibited by state law.