Today, there is no economic data being released.

Tomorrow, retail sales for the month of May are published. In April retail sales were unchanged, stalling unexpectedly as the benefits from stimulus checks began to fade. With the economy recovering, unemployment improving, and pandemic restrictions easing, all eyes are now on May to determine if April was an outlier or if retail sales are still flat month-over-month. The Producer Price Index for May is also released.

On Wednesday the Federal Reserve wraps up its two-day meeting. So far, the Central Bank has said inflation is “transitory” but last week’s CPI report could change their thinking. Investors will be tuning in to see if that’s the case. Also on Wednesday, housing starts for May are released. This data point measures how many new homes are being constructed in the month. In April housing starts fell more than expected as home builders dealt with rising building material costs. Housing starts in April fell 9.5% from the month prior to a seasonally adjusted rate of 1.569 million units. The Import Price Index for May and building permits for May are due.

On Thursday, initial and continuing jobless claims for the prior week are reported by the Labor Department. Initial unemployment claims have been steadily declining in recent weeks as pandemic restrictions ease and the economy rebounds. Initial jobless claims came in at 376,000 last week marking the sixth week in a row of declines. Also Thursday be on the lookout for Philadelphia Fed Manufacturing Index data for June.

There are no major economic data reports scheduled for Friday.

Tomorrow, Oracle (ORCL) reports quarterly earnings. The cloud software provider has been embroiled in a legal fight with the US government over the US Department of Defense’s 10-year, multibillion-dollar cloud computing contract JEDI, which initially went to Microsoft (MSFT). Oracle appealed the contract arguing the single-bidder award violated federal laws.

Be on the lookout for La-Z-Boy (LZB) to report quarterly earnings Wednesday. Although pandemic restrictions are easing and consumers are venturing out, more Americans are paying attention to the comfort of their homes, which could benefit La-Z-Boy. That is not to say the company isn’t without problems. Shipping delays are holding up deliveries, which are now sometimes taking as long as six to nine months. Investors will be paying close attention to hear if there have been any improvements on that front.

On Thursday Lennar (LEN) reports quarterly earnings. The homebuilder is benefiting from red-hot demand for new homes as would-be buyers try to take advantage of low interest rates. With the inventory of existing homes tight, buyers have been turning to new homes. Nevertheless, demand has been so strong Lennar and other home builders have begun using blind auctions to sell new homes in some areas including Texas, Florida, and California. Investors will be paying close attention to what Lennar has to say about demand and building costs now and in the future.

Adobe (ADBE) also reports on Thursday. The maker of popular software including Photoshop, Illustrator, and Lightroom is expected to report higher earnings and revenue amid strong demand. In a bid to make its applications better, Adobe recently announced it has made versions of its popular software that run on Apple’s (AAPL) new M1 processor. That has resulted in an 83% increase in overall performance improvement. It will be interesting to see if that drives more demand for its products.

Lastly, Kroger (KR) reports its latest results on Thursday. The grocery-chain operator has been increasing wages in an effort to lure more workers its way amid widespread labor shortages. Kroger is aiming to hire 10,000 workers and held a massive job fair last week. Kroger pays an average of $15.50 per hour and in March committed to investing $350 million to increase the average hourly wage to $16.

SoFi Summer Solstice sizzles with a painting party and yoga on the beach. And check out Know Your Strengths and Your Next Dollar—live on LinkedIn, Twitter, and Zoom. Reserve your seat in the SoFi app! 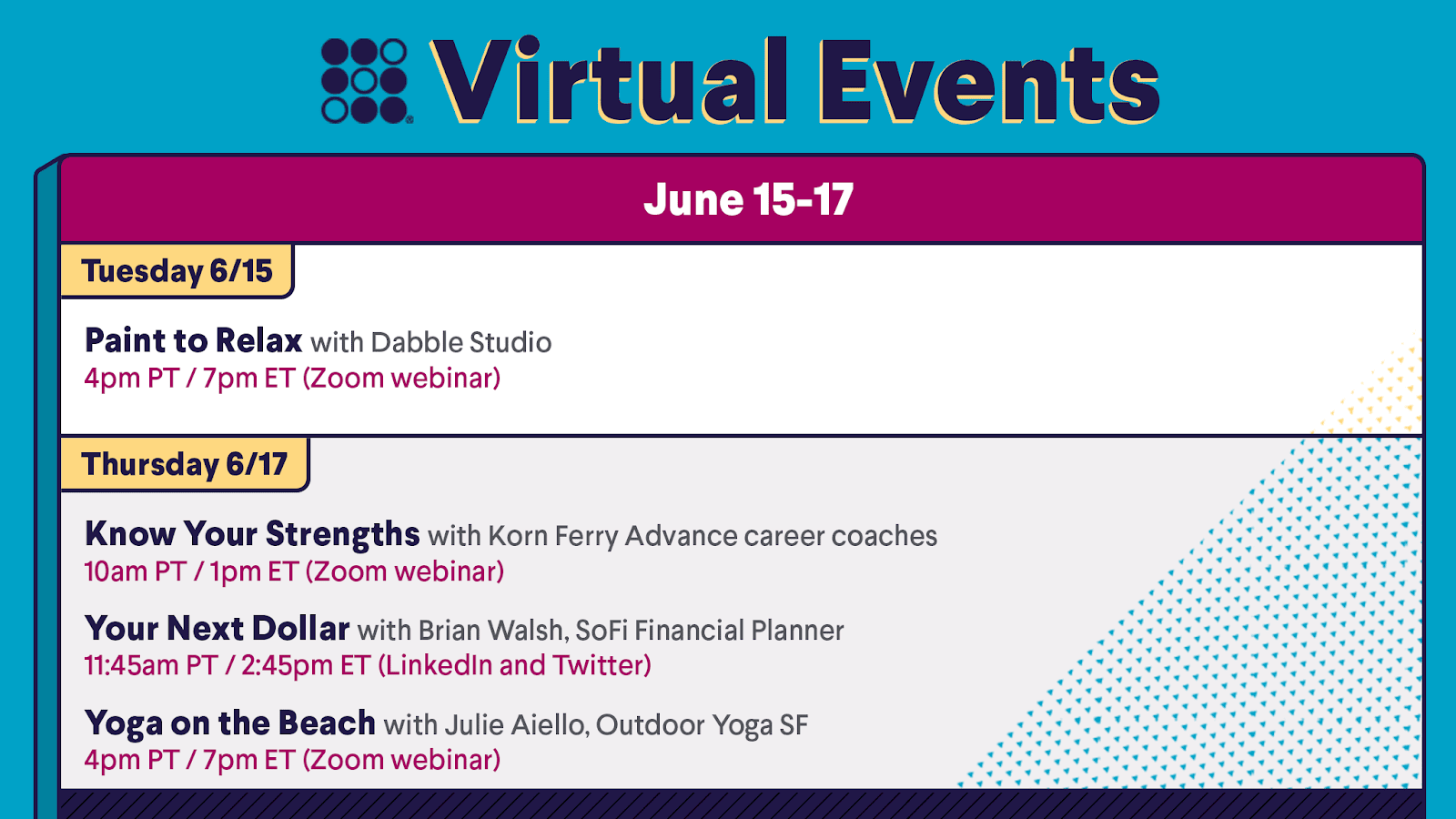 The pandemic-fueled shopping surge is expected to spill over to the back-to-school season, with Amazon (AMZN), Walmart (WMT), Target (TGT) and other retailers poised to benefit. The shopping season usually kicks off in mid-July and lasts through August.

Back-to-school shopping has traditionally been a big sales driver for retailers as families purchase clothes, electronics, college dorm décor, and school supplies. This year is expected to be even stronger given pandemic shutdowns kept many students at home. Now with life returning to normal they are ready to spend again. US spending for back-to-school gear and supplies is projected to increase 5.5% year-over-year and increase 6.7% when compared to 2019.

A better-than-expected back-to-school shopping season will be welcomed by the online and offline retailers. Amazon, Walmart, and Target will face tough baseline comparisons with 2020, when sales of groceries and other pandemic essentials skyrocketed. Meanwhile Macy’s (M) and Kohl’s (KSS) were hit hard during the pandemic and need the boost a stronger back-to-school shopping season may bring.

Apparel sales are expected to be among the big drivers of growth as consumers swap their loungewear for new shoes and attire. Some forecasts have apparel sales growing nearly 80% year-over-year and 11% compared to 2019. Department stores should be a big beneficiary of that trend as consumers hit malls again.

Ecommerce sales will still be part of the picture but are expected to decline around 7% from this time last year. With that said, they’re projected to increase more than 50% compared to 2019. That underscores the comfort level consumers now have shopping online. The back-to-school shopping season doesn’t kick off for a few more weeks, but Amazon’s Prime Day on June 21 and 22 could jumpstart sales. Walmart and Target are also running summer sales that overlap with Prime Day.

Retailers are benefiting from more than a year’s worth of pent-up demand which bodes well for their bottom lines. The big question for investors in the near term is, will it be enough for some of them to overcome tough year-over-year sales comparisons?

DiDi Chuxing, the Chinese ride-hailing startup which filed to list in the US last week, wants to do more than provide users with rides. It is offering a growing number of services to its 493 million annual active users. The ride-hailing startup is aiming to become a mobile platform for everything from booking rides to getting gas. It is a strategy already embraced by Alibaba’s (BABA) Alipay. Its main business is mobile payments, but it also lets users purchase airline tickets and pay utility bills.

Ride-hailing is by far DiDi’s main revenue contributor, but its “other initiatives” are starting to expand. For the first quarter this growing segment represented 5% of the company’s total revenue—up 1.2% since 2018.

DiDi will not lack the capital necessary to expand into personal finance, bike-sharing, and other services like moving given that its IPO is expected to be the largest public tech debut of 2021. The company, which filed under its official name Xiaoju Kuaizhi, did not say which exchange it will list on in the US or how much it is seeking to raise.

Nonetheless, the IPO is expected to be huge, given the company’s valuation stood at $62 billion the last time it raised capital in August. DiDi could end up with a value of as much as $100 billion when it goes public. The company is backed by SoftBank (SFTBY), Alibaba, and Tencent (TCEHY).

PS: SoftBank is an investor in SoFi.

In DiDi’s IPO prospectus the company said bike and e-bike sharing were the biggest drivers of “other initiatives” sales. It also includes automobile leasing, freight delivery, and financial services in that category. Personal finance was not called out in the prospectus, but DiDi is focusing on that too.

Last summer, its fintech unit DiDi Finance inked a partnership with Bank of Shanghai to provide digital personal finance products. It also teamed up with China Merchants Bank to support credit card payments and installment purchase plans for rides. Another DiDi unit partnered with Ping An Insurance. The world is becoming more digital and DiDi wants to be a major player in that shift. As the leading ride-hailing service in China it may be able to pull this off.

“An integral part of financial wellness is having a cash reserve. Research shows that having cash to cover the unexpected has the biggest impact on financial stress, anxiety, and satisfaction.”