Today, the US Census Bureau reports durable goods data for March. The figure tracks durable goods manufacturers’ shipments, orders, and inventories for the month. In February, new orders for durable goods declined by $2.9 billion, or 1.1% to $254 billion. This marked the first decrease after nine months of consecutive increases, but economists are anticipating a rebound in March’s report. Core capital goods for March are also released today.

On Tuesday, the Conference Board releases the Consumer Confidence Index for April. The index tracks how households feel about the health of the economy and is often used to predict consumption and saving habits. In March the index reached 109.7—a big uptick from February when the reading was 90.4. This March, consumer confidence hit its highest level since the onset of the pandemic. As more people receive COVID-19 vaccines and shutdown restrictions ease, the reading could continue to climb. The February Case-Schiller home price index and homeownership rate for Q1 are also released Tuesday.

On Wednesday, the Federal Reserve will make an announcement. Investors will be on the lookout for any commentary about the Fed’s stance on an increase in interest rates. During the March FOMC meeting the Fed said the economy still needs extra support.

On Friday, Consumer spending numbers for March will be released. The index tracks the value of goods and services purchased by US consumers in the month. Consumer spending sank 1% in February for its steepest decline in ten months. Consumer spending should increase in March, buoyed by pandemic stimulus checks, lower unemployment, and businesses reopening.

Today, Tesla (TSLA) reports quarterly earnings. Investors will want to see if the electric vehicle maker can keep up its six-quarter profit streak. Tesla recently faced stumbling blocks in its fast-growing Chinese market due to quality complaints, which has led to a public rebuke from Chinese regulators and a vow by Tesla to improve. Tesla CEO Elon Musk thinks China will eventually become the company’s largest market.

On Tuesday, look for Microsoft (MSFT) to report quarterly earnings. The software giant just ended $10 billion takeover talks with the popular messaging app Discord. Microsoft has been looking for acquisitions to bolster its consumer reach recently. Last summer it tried to purchase parts of TikTok, the short video app.

On Wednesday, Apple (AAPL) reports quarterly earnings. Analysts anticipate that Apple will beat Wall Street’s forecasts for the quarter. Apple is also expected to announce a share repurchase program and dividend increase. Apple could buy back as much as $50 billion in stock and raise its dividend payout by more than 10%.

Mastercard (MA) will report earnings for the quarter on Thursday. Last week the credit card giant paid $850 million to acquire Ekata, an identity verification company. The purchase is aimed at enhancing Mastercard’s digital identity and security framework. The company is also investing millions of dollars in Fearless Fund, a VC firm founded by Black women which invests in female, BIPOC-owned startups.

On Friday, ExxonMobil (XOM) reports quarterly earnings. The oil company, which is facing investor pressure to combat climate change, announced a $100 billion plan to make money capturing carbon and burying it beneath the Gulf of Mexico. ExxonMobil wants to offer its service to industrial companies in the Houston, Texas area including petrochemical plants.

Want to build a virtual community or be your own boss? Join us this week, plus tune in to the next segment of Your Next Dollar—live on LinkedIn, Twitter, and Zoom. Reserve your spot in the SoFi app! 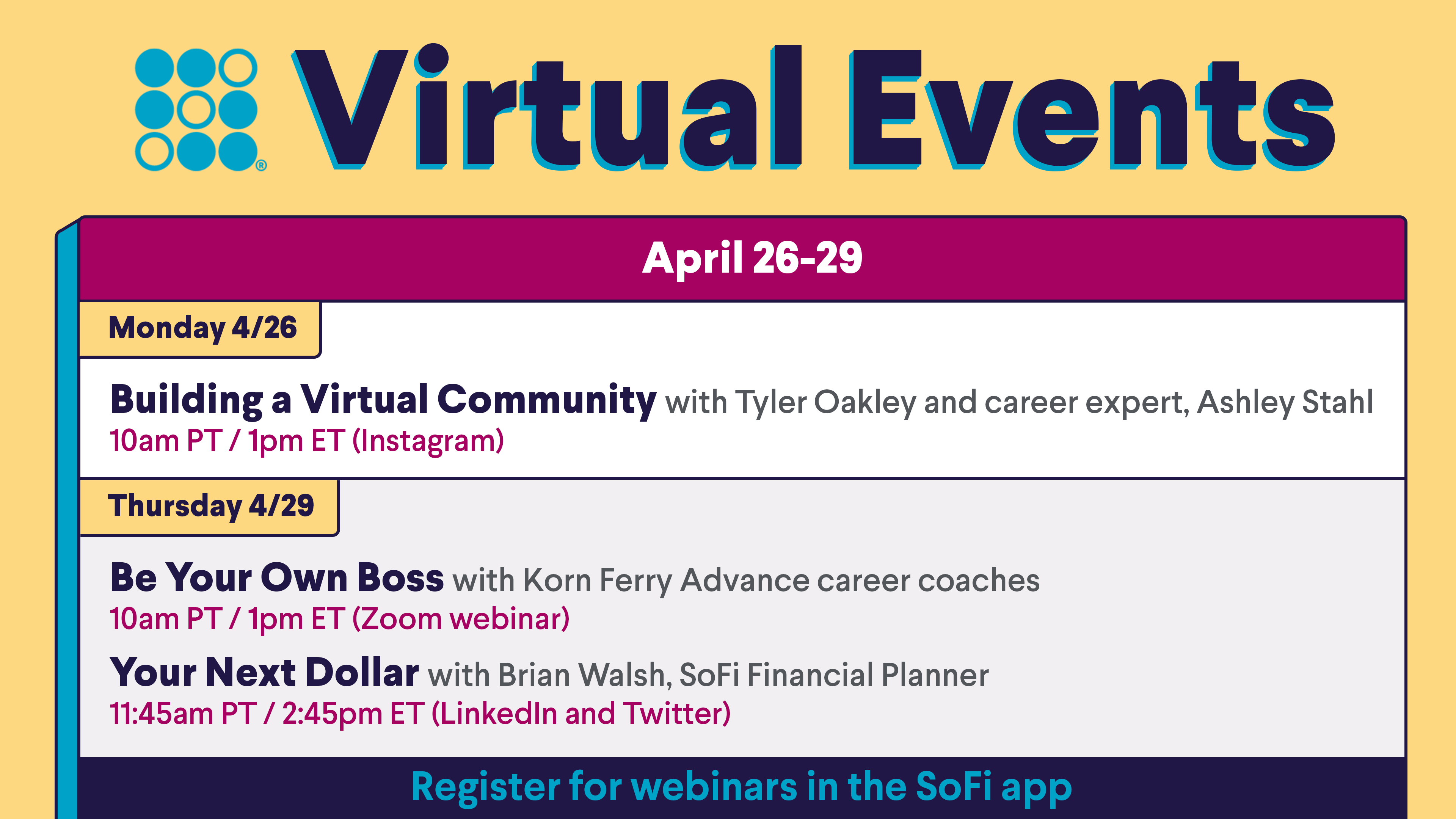 This trend is a departure from the traditional way movies and television shows from the US are distributed internationally. Historically, content is produced in Hollywood studios and sent overseas either with subtitles or dubbed audio. But now streaming platforms are spending billions of dollars to create content which caters to specific international markets.

Streaming giants are developing content in local languages which fits into local cultural contexts. There has recently been a boom in new movies and TV shows produced in languages including Hindi, French, Portuguese, and Polish. This trend is also weakening the importance of American content on the global entertainment stage.

Streaming Subscriptions Boom Outside US

Streaming giants have good reason for turning their attention to international markets. The number of international streaming subscribers surpassed 1.1 billion in 2020. Four years ago the subscription rate stood at less than 400 million.

Netflix's expansion overseas, the international launch of Disney +, and the COVID-19 pandemic have contributed to the spike in international streaming customers. For Netflix's first quarter, 89% of its new customers came from markets outside the US and Canada. As of March, 38% of the new content Netflix is developing is in a non-English language. The company also recently announced it is investing $500 million to create local language content in South Korea.

Disney and Amazon are also creating original content in local languages. Of Disney's new content in development, 24% is based outside of the US. That's a big jump considering only 3% of its content was international as of mid-March 2021. Disney+ is available in 59 countries and has more than 100 million subscribers. Earlier this year Disney said it would spend $9 billion per year by 2024 to produce Disney+ content, including 50 international projects.

Since 2017 Amazon has doubled the amount of local language content it produces each year. Amazon Prime’s streaming service has more than 200 million subscribers, and international subscriber growth in 2020 increased 80%.

Streaming platforms got a boost during the pandemic as people around the world looked for ways to entertain themselves while social distancing. As some in-person entertainment options return, streaming companies are now finding new ways to keep up their momentum. All these major US streaming companies see international markets as a promising way to grow.

Unemployment Scams are Surging: Here’s Tips to Keep Yourself Safe

Fraudulent unemployment claims filed in the US are surging during the COVID-19 pandemic as scammers take advantage of government unemployment assistance. Scammers are applying for unemployment benefits in victims’ names and getting the cash deposited into their own bank accounts.

Since the onset of the pandemic, more than $89 billion has been paid out in fraudulent claims. Many of the scams target the Pandemic Unemployment Assistance (PUA) program which extends benefits to self-employed and gig workers. Applicants do not need employer verification of their status, making it easier to commit fraud. The passing of the $1.9 trillion American Rescue Plan in March is sparking a new round of these scams.

Vigilance is the Best Defense

A fake claim filed in a person’s name could delay their ability to collect legitimate unemployment benefits. The government could also expect them to pay taxes on the income. Vigilance is the best defense against this kind of scam.

To file unemployment claims, a scammer has to know certain information about a person. To obtain this information, they send phishing emails, create fake state unemployment agency websites, and send malware in texts and emails. Staying smart online can go a long way in preventing these scams.

There are several telltale signs which could mean a person has been a victim of an unemployment benefit scam. For example, if someone receives a 1099-G tax form in the mail even if they have not applied for unemployment insurance, they may want to take steps to protect themselves.

A scammer who has filed for unemployment under a false name may have access to other personal information about a victim. If a person believes they are part of an unemployment scam, they should quickly notify their employer and the state. After that it is a good idea to take defensive steps to mitigate the potential risk including requesting a credit freeze, placing fraud alerts on credit cards, and monitoring credit reports for any suspicious activity. These steps may not completely stop scammers, but they could mitigate damage.

“Financial health isn’t synonymous with a person’s savings or how much they currently earn. It may be helpful to think of good financial habits as a future-oriented exercise routine that can start with small daily steps—something done today that’s motivated by longer-term gains.”