Today, the US Treasury releases data on the federal budget for March, including the deficit. Last March the government reported a $119 billion shortfall. That figure is expected to be wider given the impact from a year of the Coronavirus.

On Tuesday, the NFIB Small Business Optimism Index for March, Core CPI for March, and the Consumer Price Index for March will be released. This index tracks the prices consumers pay for goods and services. It rose 0.4% last month as the price of gasoline increased. Investors will be paying close attention to any signs of inflation as the US economy begins to emerge from the COVID-19 pandemic.

On Wednesday, the Import Price Index for March will be published. The Federal Reserve will also release its Beige Book report. The Beige Book is published eight times per year and provides insight into the economy based on data from the Federal Reserve's 12 regional banks. February’s report showed the economy expanded, but only modestly. Investors will be looking to see if growth picked up since then.

Lots of economic data will be released on Thursday, including March Retail sales, the Philadelphia Fed Manufacturing Index, and the Empire State Manufacturing Index. Initial jobless claims will also be published. For the week ended March 27, initial jobless claims unexpectedly increased to 719,000 from 675,000. Investors will be looking to see if that was a one-off or part of a broader trend. Also Thursday, the Department of Labor releases continuing jobless claims, which is the number of individuals already collecting unemployment.

On Friday, the March Consumer Sentiment Index will be released. The Commerce Department will report housing starts for March on Friday, which is a key indicator for the state of the economy. In February, housing starts fell to a six-month low amid a country-wide cold snap. Investors will be parsing the March report to see if that was a temporary setback. Tight inventory and demand for big houses were driving growth prior to the pullback.

Today, Aphria (APHA) reports earnings. The Canadian producer and distributor of cannabis is merging with rival Tilray (TLRY) in a nearly $4 billion deal. Aphria's stock has more than doubled since the beginning of 2021, benefiting from states' moves to legalize medicinal and recreational marijuana. In late March, New York became the 16th state to legalize cannabis.

On Wednesday, a handful of large banks report their latest results. JPMorgan (JPM) and Wells Fargo (WFC) are two of them. Many customers were frustrated last month after the banks said they wouldn’t distribute stimulus checks until the official release date. Some of their fintech rivals were quicker to distribute checks. Shares of JPMorgan are up in 2021 despite the backlash, with the stock setting an all-time high last month. With the economy on the mend, interest rates rising slightly, and growth returning, bank stocks are generally performing well.

Also look for Goldman Sachs (GS) to report quarterly earnings on Wednesday. The Wall Street investment firm is entering the Bitcoin market. Goldman Sachs’ private wealth management unit will soon let clients with portfolios of at least $25 million invest in Bitcoin. The bank said it will roll out investment options during the second quarter.

On Thursday, Taiwan Semiconductor Manufacturing Co Ltd. (TSM) will report its earnings for the quarter. The semiconductor contract manufacturer's business is surging amid a global chip shortage. Demand for computers and consumer electronics skyrocketed during the pandemic, resulting in a supply-demand imbalance. In response, TSMC plans to invest $100 billion by 2025 to expand capacity. The move by the world's largest contract chip manufacturer comes a few days after Intel (INTC) said it will spend $20 billion on increasing manufacturing capacity.

On Friday, Kansas City Southern (KSU) will hand in its report card. It may be the last earnings report for the rail operator as a standalone company. Kansas City Southern was sold to Canadian Pacific Railway in January for $25 billion in cash and stock. The acquisition, the largest so far in 2021, would create the first railroad network running between the US, Mexico, and Canada.

It’s Financial Literacy Month! Join us to learn the ABCs of investing and what you need to know about emotional intelligence—live on LinkedIn, Twitter, and Zoom. Register in the SoFi app 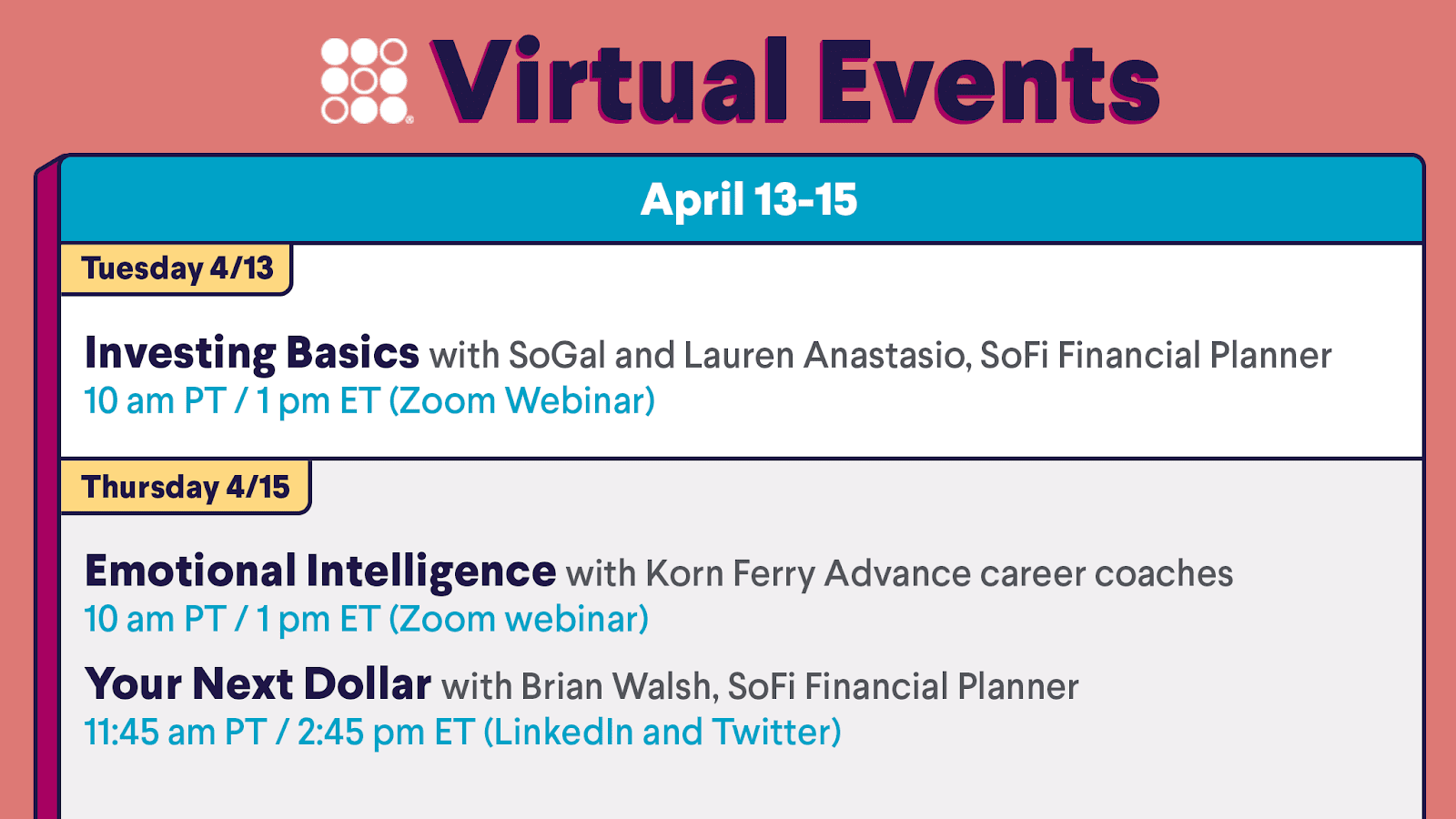 McDonald's (MCD) is closing hundreds of restaurants located inside Walmart (WMT) stores as the COVID-19 pandemic and a surge in ecommerce depresses sales. McDonald's has been serving burgers and fries in Walmart stores for more than thirty years, benefiting from a stream of hungry shoppers. The coronavirus pandemic has changed people's shopping habits, which is making the partnership less profitable. Many consumers no longer want to linger in stores, preferring online shopping and curbside service.

The McDonald’s stores located in Walmart tend to be less profitable than the restaurant chain’s other branches. McDonald's makes most of its money through drive-through orders, and the Walmart stores lack that capability. Even before the pandemic hit, Walmart shoppers were beginning to visit in-store McDonald’s locations less frequently. According to one analysis, about one-third of McDonald's sales from Walmart stores came from Walmart employees.

McDonald’s is not the only restaurant chain closing up shop in Walmart stores. Some franchises of Subway, the sandwich fast-food chain, said they also plan to close locations within Walmart this year. They also pointed to lower sales as Walmart customers pick up their goods curbside and shop more online.

Walmart Seeks Out Other Partners

The closure of restaurants within Walmart could be a blow to the retailer which makes money from leasing out space to restaurants. To counter the closures, Walmart is exploring different restaurant models including more to-go and delivery food options. It's also considering partnering with smaller, regional chains which might draw more local customers.

Both shopping and dining habits changed during the pandemic. As more people receive COVID-19 vaccines, investors will be analyzing how quickly pre-pandemic habits return and how this will impact retailers and restaurants.

Community.com Inc., a startup that connects brands and celebrities to consumers via text messages, raised $40 million in venture capital. The venture funding round was led by Salesforce Ventures and includes participation by Twilio, Live Nation Entertainment, and the Sony Innovation Fund. Community has raised a total of $90 million since its inception in 2019.

With regulations making it harder to use targeted digital advertisements, media companies, marketing firms, and celebrities are seeking new tools to communicate more directly with their audiences. Through Community’s's platform, companies and prominent individuals can send group or individual text messages to consumers who sign up with their mobile phone number.

Since its inception, Community has managed more than 3 billion text messages on its platform. It counts more than 26 million consumers as customers who are signed up to receive texts. The National Hockey League's Pittsburgh Penguins, People Magazine (MDP), Kerry Washington, and Tom Brady are among the influential people and brands using the platform.

Clients of the platform get access to the names, ages, and locations of its users. They are able to send messages to all their followers, create groups based on demographics or interests, and send personalized messages to individuals.

Salesforce Venture’s investment in Community was driven in part by the increased focus on protecting consumer privacy. As internet cookies and online tracking become more heavily regulated, brands are looking for direct ways to build connections with consumers.

Community plans to use the proceeds from the round of funding to add new features and recruit more customers. As privacy concerns grow and the advertising landscape changes, Community is becoming a leader in a new way of connecting brands and consumers.

People who are reluctant to take on extra risk right now but are looking for ways to maintain exposure to certain securities might want to consider an investment strategy called dollar-cost averaging, which just means regularly putting a set amount of money into an investment.