There are no economic data reports scheduled for today. Tomorrow, the January Case-Shiller National Home Price Index and the March Consumer Confidence Index will be released. In February, consumer confidence was up as the labor market showed signs of improvement and COVID-19 vaccine rollout progressed.

On Wednesday, look for the February Pending Home Sales Index, March Chicago PMI, and the March ADP employment report. This monthly report comes from Automatic Data Processing, which handles payroll for about 20% of US private employment. The report showed that private sector employment increased by 117,000 between January and February.

On Friday, March average hourly earnings, March nonfarm payrolls, and the March unemployment rate will be published. In February, the unemployment rate was 6.2%. Most of last month’s job gains came from the leisure and hospitality industries.

Canoo (GOEV), a California-based electric vehicle startup, will report earnings today. The company focuses on affordable commercial vehicles to be used by car rental and rideshare companies. Earlier this month, the company shared plans for an electric pickup truck which will be available in 2023.

Look out for a report from Chewy (CHWY) tomorrow. The online pet supply retailer has seen surging demand over the past year as consumers have adopted pets and purchased goods online. However, the industry is getting more crowded and Chewy is ramping up its marketing budget to stay competitive. This could have an impact on its bottom line.

On Wednesday, Walgreens (WBA) will share its latest results. Walgreens has said it has the capacity to distribute 20 million to 25 million vaccine doses per month as long as a supply of shots is available.

Micron Technology (MU) will also share its latest results on Wednesday. PC manufacturers and data-center operators have rushed to buy the company’s products over the past year. However, global supply chain challenges have resulted in a worldwide chip shortage, which could weigh on Micron’s earnings.

CarMax (KMX), the largest used car retailer in the US, will share its earnings report on Thursday. The company beat expectations with its last earnings report as consumers looked for ways to avoid public transportation without spending money on a new car. Investors will be curious to see if this trend has continued.

Enjoy the beginning of spring and some exciting events. Join us for tips on networking and a new segment of Your Next Dollar—live on LinkedIn, Twitter, and Zoom. RSVP in the SoFi app! 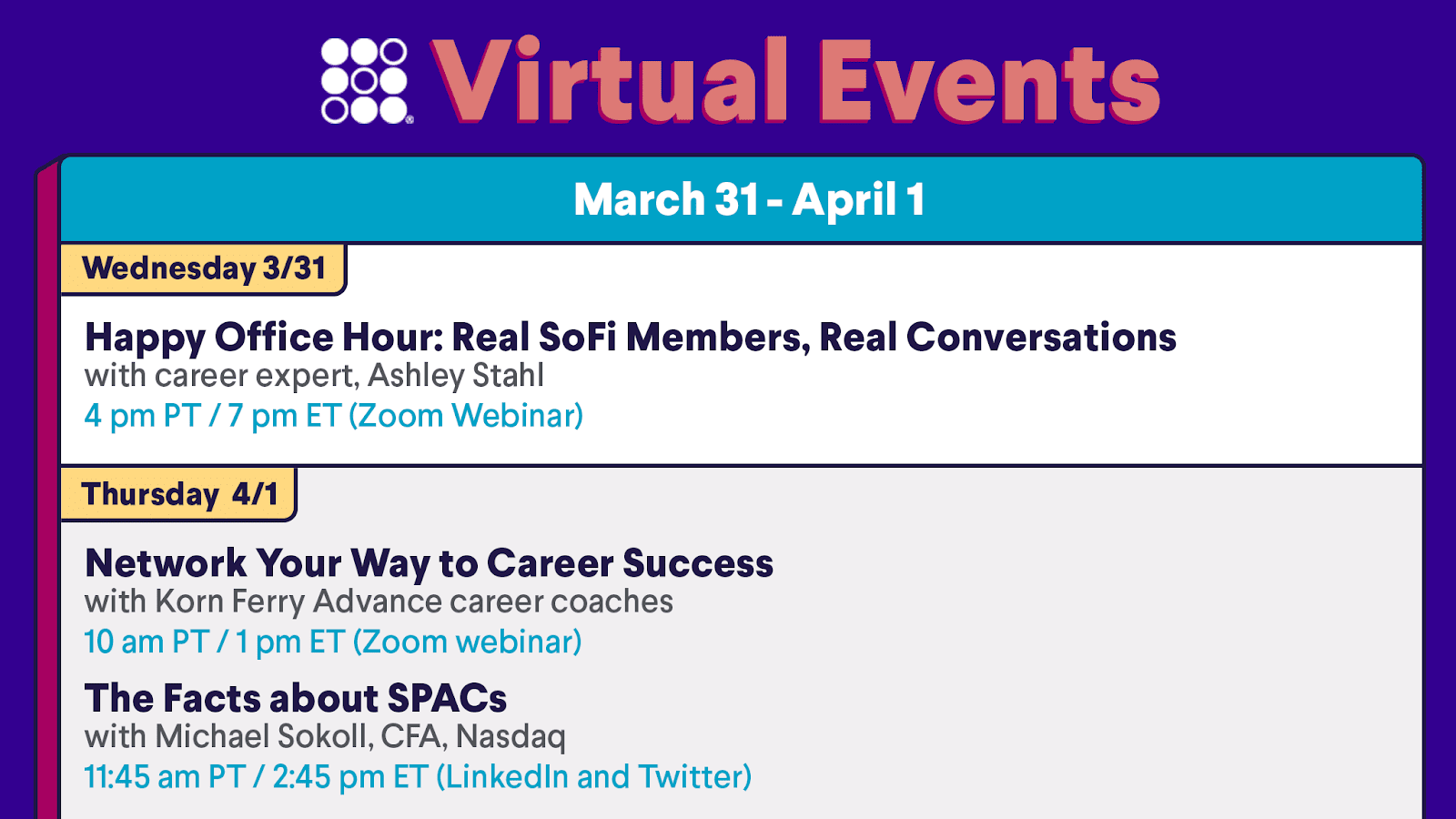 WeWork Plans to Merge With a SPAC to Go Public

Co-working space company WeWork has agreed to merge with a SPAC called BowX Acq Corp (BOWX) in order to go public. WeWork made plans to pursue a traditional IPO about two years ago, but these plans unraveled.

BowX raised $420 million as an empty shell last year and then began looking for a business to take public. Shares of the blank check company climbed on news that it will merge with WeWork.

WeWork signs long-term leases with landlords. It then renovates and furnishes spaces and subleases offices and conference rooms to businesses and individuals. These subleases are sometimes as short as one month.

The pandemic created significant hardships for WeWork. Its clients were able to pull out of leases quickly when the world began working from home, but WeWork was left locked into long-term agreements with its landlords. WeWork’s occupancy rate around the world tumbled to 47% during 2020 and it lost $3.2 billion.

The Future of WeWork and Coworking

BowX values WeWork at $9 billion including debt. This is far lower than WeWork’s $47 billion valuation from 2019. The past two years have been tumultuous for WeWork because of its failed IPO and the pandemic.

However, some investors have high hopes for WeWork’s future and for the coworking industry as a whole. A number of companies will likely continue to offer remote work options even after the pandemic subsides. Meanwhile, some office workers have grown weary of working at home during the pandemic. WeWork may be able to provide a useful solution during a time of changing norms in the way workers and employers are thinking about the role of offices.

Online second hand clothing platform ThredUp (TDUP) made its public debut on Friday. The company set its final listing price at $14. At the end of the trading day, ThredUp’s share price was $20.

The Rise of Online Thrifting

ThredUp specializes in used women’s and children’s clothing. Thrifted clothing has surged in popularity recently, especially among younger consumers who are conscious of their clothing’s impact on the environment. Because visiting in-person thrift shops was not an option for some of the past year, online used clothing retailers have seen their user numbers climb significantly.

At the end of 2020, ThredUp had 1.2 million active buyers—a 24% jump from the previous year. These shoppers placed 3.2 orders on average during the year and visited the ThredUp site six times per month.

There was a flurry of IPOs in 2020. New public listings raised more funds than in any single year during the dot-com boom. This trend shows no signs of slowing down in 2021. So far this year, 88 companies have made their public debuts through IPOs. This is a 267% increase compared to the same period last year.

There have already been several successful IPOs in the online second hand clothing space. Poshmark (POSH) went public in January and its stock price more than doubled on its first trading day.

As more people receive vaccines and begin to return to some pre-pandemic habits, investors are curious to see what lies ahead for the online second hand clothing industry. Consumers may be eager to return to in-person thrift shops, though others may continue to scour online platforms for unique items and deals.

“In the stock market, volatility is another word for risk. So, the higher the volatility, the riskier the investment. The volatility of an investment is often measured by its standard deviation of returns as compared to a broader market index or even it’s own past returns.”