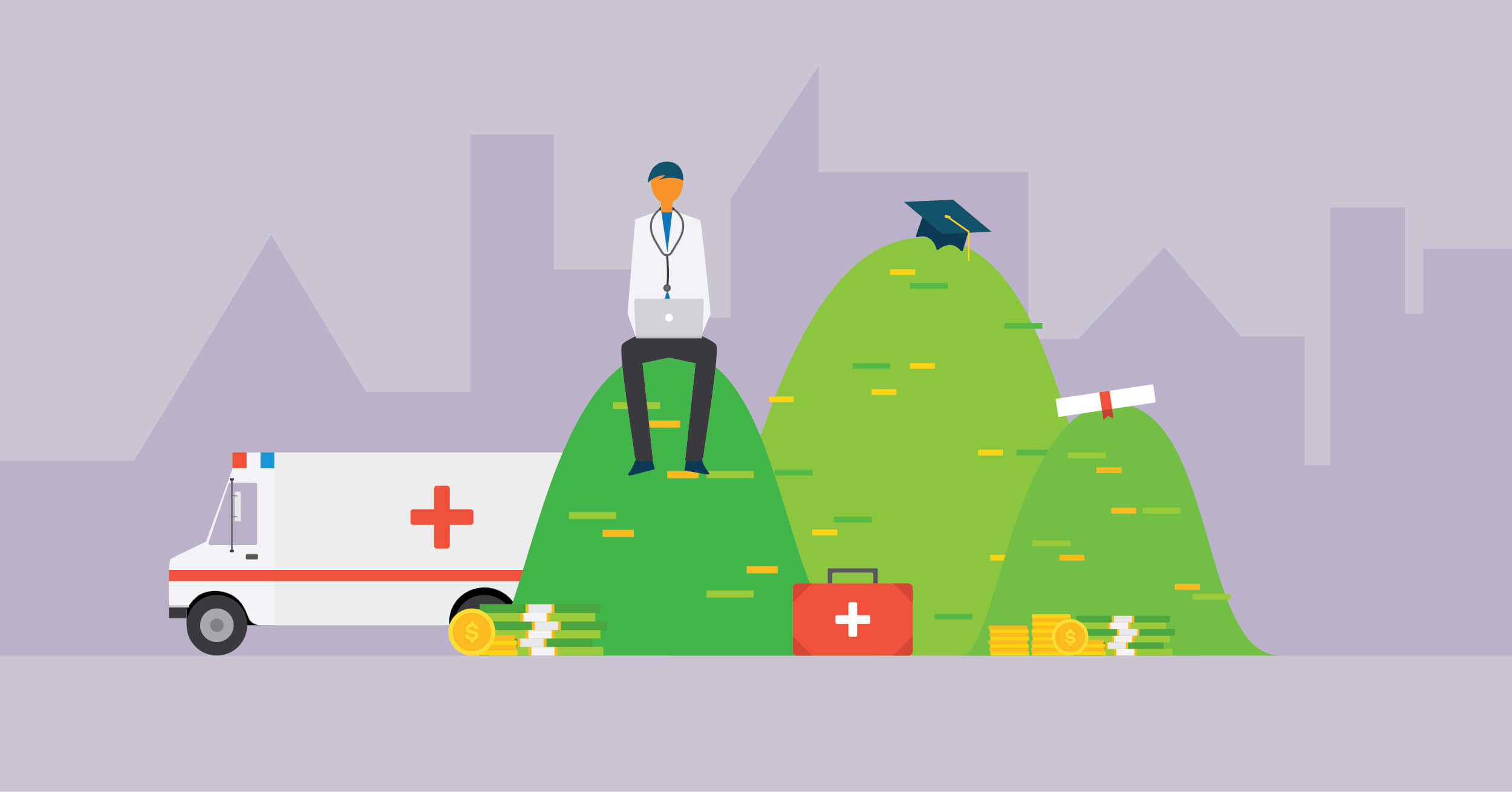 There are lots of good reasons to become a doctor. Being a physician means you can help people in one of the most direct ways possible: By doing your best to restore their health. An added bonus is you can eventually make hundreds of thousands of dollars a year doing it; Medscape’s 2016 physician compensation report found that the lowest-earning doctors (pediatricians and endocrinologists) bring in around $200,000 a year, while the highest earners (orthopedists and cardiologists) make over $400,000.

The catch, of course, is that becoming a doctor is expensive, and student debt levels have risen significantly over the years. Seventy-six percent of U.S. medical school graduates in 2016 were carrying education debt, according to the American Association of Medical Colleges. The median debt among medical students is $180,000, which of course impacts the early years of most doctor’s careers.

We asked eight doctors how they’re dealing with their debt, and their answers ranged from living frugally to refinancing their student loans. Some opted to attend less expensive universities, while others participated in scholarship programs that required them to work in underserved areas or the military. Here’s how they’re getting out of debt, and how you might approach your own as a doctor (quotes have been edited for length and clarity):

“If you can do the standard loan repayment plan, where you pay more right away, in the long run you pay less because you pay less on the interest rate. I [also] don’t spend too much. I wouldn’t go buy the most expensive car; I’m not going to buy a Ferrari. At this point, I’m not going to buy a house or anything. I wouldn’t go out and eat at nice restaurants every night. I’m just trying to live a modest lifestyle, so I have a one-bedroom apartment, the most modest I could find in the area where my work is, things like that.”

The debt payback plan: This doctor owes $55,000, and pays a fixed amount every month rather than paying back less in the beginning of his career and more as his salary grows. He is able to do this in part because of low overall debt.

“My first year of med school I took out student loans and thought, ‘This is going to be ridiculously high.’ My father, uncle, and cousins served in the Navy. I grew up in a Navy town in California. The Navy was just very familiar to me. I figured out that somebody’s got to pay for this, and it’s not something that’s going to get strapped to my parents’ back. As an adult, I realize that if I’m going to do something, I need to pay for it. So I made a plan, and the Navy was that plan. If I had to do it all over again, I would definitely [make the same choice]—and this time I would go for a four-year scholarship.”

The debt payback plan: Dr. Walker-Magra is paying back $100,000. She took out loans for her first year of medical school and some living expenses, but minimized the rest of her debt by earning a scholarship for three years of full tuition. She was also awarded a monthly stipend from the U.S. Navy’s Health Professions Scholarship Program, in return for serving as a physician in the Navy. After her internship, she was stationed as a general medical officer on an aircraft carrier in the Gulf for two years as part of the U.S. military’s post-9/11 campaign. She recently paid off her loans—once she was done with training and making a full income, she “attacked those loans” and got rid of them.

Double the doctors, double the loans

“My wife is also a physician. We’re going to have to manage our money in a way that [will allow us to] pay back our loans in the first five to 10 years. We want to make sure we’re not compounding interest. I do foresee that we won’t be buying a house right away, and we definitely won’t be spending money on hobbies and things like that until the majority of her loans are paid back.”

The debt payback plan: Under the Public Service Loan Forgiveness program, loans are forgiven after 10 years of minimum payments—as long as you’re working at a government or nonprofit organization for a decade’s worth of monthly payments (they don’t have to be 10 consecutive years, though). Dr. Patel’s minimum payment is about $400 a month now because he’s still in training, but it will go up to about $2,500 a month once he starts working. He currently owes $400,000.

“I regret that I took too much money out. I should have taken just enough to cover my rent. I would tell people now to only take the amount you need to live on.”

The debt payback plan: Dr. Moses, who initially owed $120,000, is now down to having $55,000 of debt. He minimized his tuition expenses by attending state school and took out federal loans to cover tuition and living expenses. He also consolidated $30,000 in first-year loans at a low interest rate. Now, he’s looking to refinance $25,000, the remainder of his unpaid debt.

Working in a loan repayment program

“When you’re looking at six figures of debt, you want to put a dent in that debt as soon as possible. If you [get a job at] a loan repayment site working for the government, you can receive help paying off your loans, all while practicing medicine with challenging patients. I think [a loan repayment site] can be a good place for a new doctor to start right out of school, because it can make them more prepared for private practice. The work is so challenging, it just makes anything else feel a little easier.”
r
—Dr. Karla Smith, family medicine physician in North Carolina, University of Southern California’s Keck School of Medicine

The debt payback plan: Dr. Smith paid off $100,000 of debt in four years by providing medical care in an underserved rural area, primarily working with uninsured patients, under a loan repayment program run by North Carolina’s Office of Rural Health. In addition to paying a salary, the program also provides debt repayments that begin after six months of work and increase with each payment, so those who stay for the entire four years get the most debt repaid. (Note that this option only applies to federal student debt.)

Consolidating for a lower interest rate

“I was fortunate enough to get a very large scholarship, so I had minimal loans. I consolidated them and have a very low interest rate, and so I am slowly paying them off over 30 years.”

The debt payback plan: This doctor kept her debt low by choosing to attend med school where she was offered a full-tuition scholarship. For living expenses, she took out federal loans; she opted to take out the maximum Stafford loan per year because they were interest-free during her student years.

“I only applied to med schools that would offer financial support, because I have no family that could help me. Every penny was completely and totally accounted for. I could only pay the bare minimum payments on my loans in my training. I drove a 1994 Mercury Tracer for nine years. I didn’t buy any new clothes, I didn’t take any vacations. I didn’t go to any of my friends’ weddings. There were two who got married when I was in training and I didn’t go. Money was always so tight. Even if I did have money, it would need to go to new tires or new brakes on my car.”

The debt payback plan: Dr. Ford-Glanton minimized her tuition through financial aid, federal grants, private scholarship, and working during medical school doing research and teaching. She lived frugally, but still needed some loans for living expenses. She currently owes a little over $60,000.

Applying to work in rural areas, in exchange for debt payoff

“I grew up in East Africa, in Kenya, and my intention was to finish my medical school studies and then go back. But I realized that the conditions I was going to practice in in East Africa were essentially the same as here in rural areas. I thought about med school debt before I started, so I kept it low. I went to state schools and got scholarships.”

The debt payback plan: Dr. Harmon Toomer, who owes $20,000, received a National Health Service Corps scholarship for all four years of medical school. Her schooling was paid for in full in return for her medical work in underserved areas in South Carolina for six and a half years (some of it full-time, some part-time). She says she got lucky, because that was the kind of work she wanted to do anyway.

There is no one solution for paying off medical school loans. Every doctor finds their own way to tackle their debt, whether it’s through a loan forgiveness program, a scholarship, or a refinance for a lower interest rate. If you’ve got medical school debt, find out how to refinance your loans with SoFi.

ABOUT SoFi SoFi helps people achieve financial independence to realize their ambitions. Our products for borrowing, saving, spending, investing, and protecting give our more than half a million members fast access to tools to get their money right. SoFi membership comes with the key essentials for getting ahead, including career advisors and connection to a thriving community of like-minded, ambitious people. For more information, visit SoFi.com. Want an easy and convenient way to manage your financial life? Get the SoFi app. For iOS and Android.