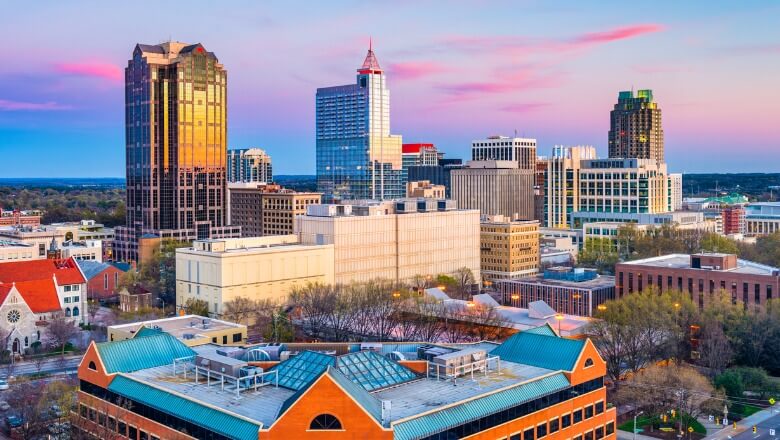 Raleigh is the second-most populous city in North Carolina — the population has increased over the past 20 years from just under 300,000 to over 470,000 residents — and also happens to be one of the fastest growing cities in the United States. At one point, Raleigh was also named the second-most educated city in America, with over half of its residents holding at least a bachelor’s degree.

Those who call Raleigh a college town are spot-on, as Raleigh is home to at least 11 major colleges, including North Carolina State University. The city is within an hour’s drive of both Duke University and the University of North Carolina at Chapel Hill, making it neutral ground for Blue Devils and Tar Heels fans alike.

Raleigh, though, is known for more than just brains and basketball; it’s also a great place to find smoked “whole hog” barbecue, complete with signature vinegar and pepper-based glaze.

Home values in the area have jumped over 29% in the past year, way faster than the national growth rate of 19%, according to Zillow.

If you’re thinking of buying property in Raleigh, you’ll want to check out our assessment of the homebuying, demographic, and market trends in the area.

The Raleigh housing market has been hot and median home prices are projected to continue to rise in the coming year, according to price data, forecasting Raleigh real estate trends, from Zillow.

Despite a slower increase in home sales in 2021 relative to 2020, the steady rise in home prices and continued decrease in the average amount of days listings spend on the market, may signal a housing market that has more room to run.

Homes sold on the real estate market in Raleigh typically close around 4% above the listing price and typically spend around 51 days on the market before an offer is accepted.

Prospective homebuyers will need to be vigilant if they hope to buy a house in 2022, as data from Zillow shows that home prices are likely to increase at a faster rate in the coming year.

Currently, the average home in Raleigh spends around 33 days on the market before it’s snapped up, so homebuyers shopping for a house in the interim may finally have some breathing room. 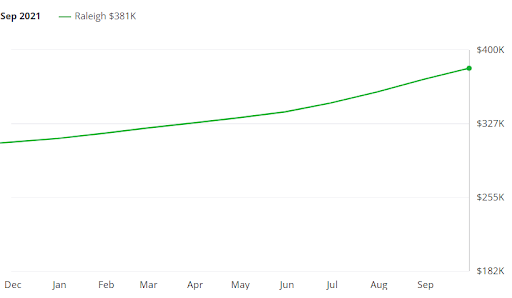 Demographics of the Raleigh Market

Raleigh households tend to be wealthier and more educated than the United States as a whole. This is possibly due to its proximity to some of the most prestigious educational institutions in the South.

As the state capital of North Carolina, Raleigh offers a solid foundation of government jobs through the State of North Carolina, Wake County and the City of Raleigh. In recent years, the city and its surrounding areas have also seen major growth in professional services, including tech, healthcare and financial services.

In fact, Raleigh has developed a reputation as a rapidly developing tech hub in the South. The city was rated number one in job growth in STEM-related industries (science, technology, engineering and mathematics); it also ranked number two in growth of technology jobs, second only to Austin, Texas.

Major tech companies like International Business Machines, Red Hat Inc. (a subsidiary of IBM) and Cisco Systems all house major branches in and around Raleigh, and each location employs thousands of Raleigh residents.

The capital of the Tar Heel State isn’t just a great place for basketball, tailgating, and barbecue; it’s also an excellent place to live.

Based on key characteristics, including home values, growth in home prices, and population, we’ve isolated the five most popular Raleigh neighborhoods to help you on your home shopping journey.

Without a doubt, North Raleigh is the most populous neighborhood in the city; it encompasses a number of growing residential enclaves, including the quaint Falls River community as well as the posh North Ridge area.

North Raleigh is an excellent area for any family looking to put down roots. There’s a variety of activities, restaurants and parks in the area for families to enjoy, including the scenic Shelley Lake Park and the 237-acre Durant Nature Preserve.

The North Raleigh neighborhood is split into several distinct residential enclaves and features homes across a variety of price points, ranging from entry level to high end.

If you’re looking to buy a home in North Raleigh, you’ll want to keep an eye on home prices as they’ve risen by over 28% since last year. The growth rate is in line with the growth rate of the Raleigh housing market as a whole.

On a relative basis, home prices in North Raleigh are only slightly more expensive than the city overall.

The North Hills area features a large number of luxury apartments for rent, while the outer Six Forks residential districts trend towards upscale residential communities. The neighborhood is known to be generally safe, quiet, and close to amenities.

Homes in Six Forks typically sit on the high end of the market and many of the properties located within its residential districts fall within the category of upscale or luxury homes.

The growth rate in home prices of 27% for Six Forks is slightly below average Raleigh local housing market real estate trends of 29.5%, according to December 2021 data.

Falls of Neuse is located just east of Six Forks and also happens to encompass the eastern half of the popular North Hills community. East of North Hills, Falls of Neuse is generally a quiet residential community within close proximity of Raleigh’s Midtown and Downtown areas.

The Falls of Neuse neighborhood is bordered by East Millbrook Road to the North and the Raleigh beltway to its south. The community is divided by Eastgate park at its center and is also known to be very pet-friendly.

Homes in the Falls of Neuse neighborhood range in price; properties near the highly coveted North Hills neighborhood to the west generally price on the upper end of the Raleigh housing market, while home prices fall as you move further east.

Falls of Neuse shares many characteristics with its Six Forks neighbor, including its high growth rate and above average home prices, which stand at 25.8% and $525,000, respectively.

The Northeast Raleigh neighborhood is a quiet Suburban community bordering Falls of Neuse to its west. It’s the 3rd most populous neighborhood in Raleigh and may be one of the more diverse up-and-coming communities in the greater Wake county area.

Compared to its Six Forks and Falls of Neuse neighbors, home prices in Northeast Raleigh are generally more affordable, which makes the area attractive to a first time home buyer. It’s located close to a number of restaurants and shopping centers.

Homes in Northeast Raleigh are generally more affordable than average when it comes to the real estate market in Raleigh, NC. The area has also seen above-average growth in home prices in 2021.

Northeast Raleigh ranked as the third-fastest growing neighborhood in the greater Raleigh area in 2021, with home prices rising 28.5%, relative to the Raleigh housing market’s average of 26%.

Northwest Raleigh is the second most populous neighborhood in the city and borders many important landmarks, including the William B. Umstead State Park, the prestigious Brier Creek Country Club, and the Raleigh-Durham International Airport.

Northwest Raleigh’s prime location also puts it within driving distance of both Downtown Raleigh and North Carolina State University. The area is known for its low crime rates and quality school districts.

It’s easy to see why the Raleigh real estate market has been active. There are some amazing neighborhoods to choose from, whether you’re single or have a family to look after.

If you think Raleigh could be your home sweet home, then you may need to consider your mortgage financing options.

If you’re buying a home or refinancing an existing mortgage, SoFi can help you make the process as quick and painless as possible.

SoFi Loan Products
SoFi loans are originated by SoFi Bank, N.A., NMLS #696891 (Member FDIC), and by SoFi Lending Corp. NMLS #1121636 , a lender licensed by the Department of Financial Protection and Innovation under the California Financing Law (License # 6054612) and by other states. For additional product-specific legal and licensing information, see SoFi.com/legal.
SoFi Mortgages
Terms, conditions, and state restrictions apply. Not all products are available in all states. See SoFi.com/eligibility for more information.
Third-Party Brand Mentions: No brands or products mentioned are affiliated with SoFi, nor do they endorse or sponsor this article. Third-party trademarks referenced herein are property of their respective owners.
SOHL1021030