Tomorrow, the Q4 current account deficit and February new home sales will be published. New home sales totaled 923,000 in January. The cost of materials used to build new homes, from lumber to copper, is climbing because of high demand and a slow recovery from supply chain issues at the onset of the pandemic.

On Thursday, Q4 gross domestic product and initial jobless claims will be published. Jobless claims rose slightly to 770,000 last week but still remain close to the lowest levels seen over the course of the pandemic.

On Friday, February personal income, consumer spending, core inflation, and trade in goods will be published. March consumer sentiment will also be released. Consumer sentiment dropped between January and February, partially because of slow vaccine rollout.

From Balancing Work and Mental Health to SPACs: What’s the 411?—and more—there’s a virtual event for everyone. Join us live on LinkedIn, Twitter, and Zoom. Register in the SoFi app! 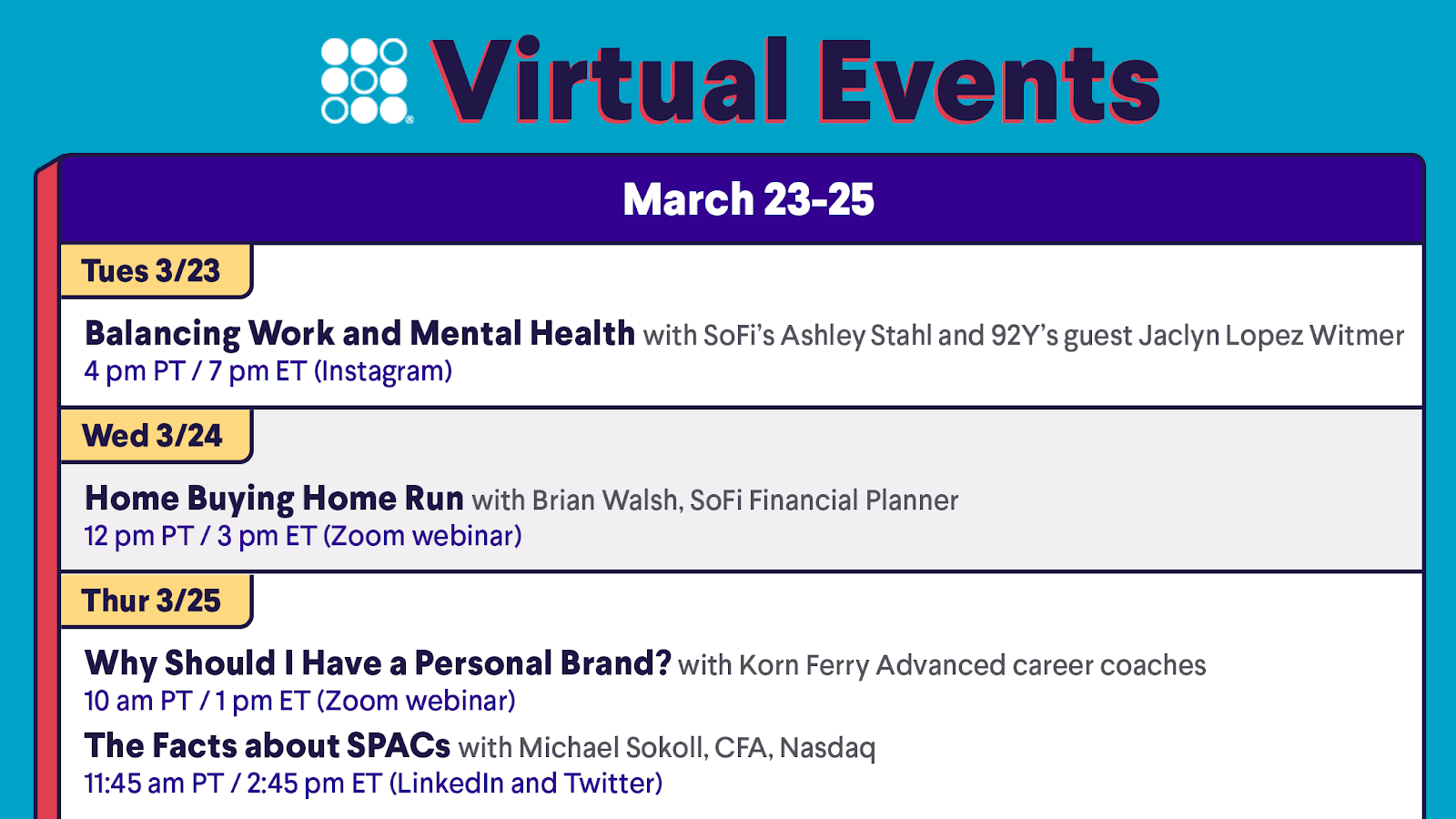 Last year, the most-searched words on the New York Times (NYT) website were not related to politics or to COVID-19. They were the words “crossword” and “Spelling Bee,” which is the name of the newspaper’s online word game.

2020 was a tumultuous year for the news cycle. Subscribers flocked to The New York Times to stay up-to-date about the presidential election, vaccine development, and other news. But analysts warn that this subscriber growth likely will not continue into 2021. For this reason, The New York Times is looking for ways to diversify its revenue sources and it sees the $100 billion mobile games market as a way to do this.

At the end of 2020, The Times had 840,000 games subscribers. This represented a 40% increase from the same period a year earlier. For context, the company has 5.1 million digital news subscribers, so games are still a small part of its business, but the company is investing more money in games than ever before.

The Times recently hired Jonathan Knight, who was part of the team which created viral games like Words With Friends and FarmVille at Zynga Inc. (ZNGA). Knight will build a team to design unique, creative games that go beyond crossword puzzles and Spelling Bee.

Navigating a Difficult Time for Journalism

The 170-year-old newspaper is nowhere near becoming exclusively a gaming company. But it wants to offer more services than just news, and it wants to provide products which compliment its news offerings. For example, it hopes users will take breaks from reading intense stories to play a quick game and then continue reading articles.

The New York Times’ share price climbed over 60% last year—its fourth straight year of gains. Though the journalism industry as a whole is struggling financially, The Times has so far been able to navigate a difficult landscape. Mobile games may help it continue to achieve success.

Delivery Apps and Grocery Stores May Not Be the Perfect Match

DoorDash, GrubHub, and Other Apps Make Deals With Grocery Stores

Over the past year, a number of food delivery apps inked deals with grocery stores, including DoorDash (DASH), GrubHub (GRUB), and Deliveroo, the UK company which is preparing to make its public debut in London in the coming weeks.

These apps began by specializing in delivering restaurant food, but during the pandemic they filled a need for small grocery deliveries. In some ways, this business model is perfect: People who make large weekly grocery orders often need extra milk or a spur-of-the moment ingredient, and delivery apps have fleets of workers who can get small orders to consumers’ doors in a matter of minutes. However, profitability remains a concern.

The global grocery business is worth about $7.6 trillion per year, but grocery margins are notoriously thin. When a delivery app transports a meal for a restaurant, they usually take roughly a 30% commission. Often this still results in losses for delivery apps.

Grocery stores can only afford to pay a 15% to 20% fee to delivery companies. If consumers are mainly using these services for small purchases, like a carton of eggs or pint of ice cream, transactions are not profitable for delivery companies. At the same time, if delivery companies mark up their prices too much, consumers will probably opt to just walk to the corner store instead of ordering small grocery deliveries.

Margins on small grocery deliveries also depend on what types of items customers order. Cheap items which are bulky and difficult to carry, such as toilet paper or bread, make logistics and profitability extra difficult. In contrast, small, high-value items like alcohol tend to be more profitable.

Though the pandemic has caused surging demand for online ordering and delivery, not all forms of ecommerce are equally profitable. As more of the population receives COVID-19 vaccines and people begin to feel comfortable going to in-person stores, ecommerce for small grocery orders may become an even more difficult business.

“When people don’t know how much they spend and when, it can be difficult to stick to a savings plan. If you don’t know how much money hits the bank account each month and how much you spend, how do you know what’s a realistic amount to save? Before creating savings strategies, many people find it helpful to track their spending and expenses, organized by week, month, or year.”

Ladder offers term policies in New York (policy form # MN-26) that are issued by Allianz Life Insurance Company of New York, New York. Term policies are issued in all other states and DC by Fidelity Security Life Insurance Company, Kansas City, MO (policy form No. ICC17-M-1069 and M-1069 and policy TL-146). Coverage and pricing is subject to eligibility and underwriting criteria. SoFi Agency and its affiliates do not guarantee the services of any insurance company. The California license number for SoFi Agency is 0L13077 and for Ladder is OK22568. Ladder, SoFi and SoFi Agency are separate, independent entities and are not responsible for the financial condition, business, or legal obligations of the other. Social Finance, Inc. (SoFi) and Social Finance Life Insurance Agency, LLC (SoFi Agency) do not issue, underwrite insurance or pay claims under LadderLifeTM policies. SoFi is compensated by Ladder for each issued term life policy. SoFi offers customers the opportunity to reach Ladder Insurance Services, LLC to obtain information about estate planning documents such as wills. Social Finance, Inc. (“SoFi”) will be paid a marketing fee by Ladder when customers make a purchase through this link. All services from Ladder Insurance Services, LLC are their own. Once you reach Ladder, SoFi is not involved and has no control over the products or services involved. The Ladder service is limited to documents and does not provide legal advice. Individual circumstances are unique and using documents provided is not a substitute for obtaining legal advice.