Cost of Living in Georgia 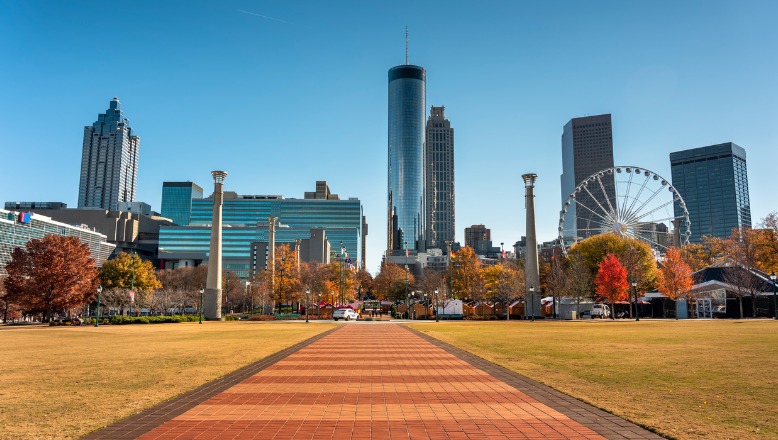 Peaches, pecans, and a plethora of historical and cultural attractions make it easy to understand why so many people have Georgia on their minds.

From the skyscrapers of Atlanta to the dangling Spanish moss over Savannah’s storied squares — and with tons of quaint Southern towns in between — plenty of folks are joining Georgia’s communities. In fact, it’s one of the fastest-growing states in the country, with a projected population increase of 17.7% by 2030.

Better yet for prospective Georgians, the state has a relatively low cost of living (though your mileage may vary if you opt for a major metropolis like Atlanta.

Below, find an up-close and personal look at the cost of living in Georgia.

What’s the Average Cost of Living in Georgia?

If you’re considering relocating to Georgia, here’s some good news for your monthly budget: Georgia enjoys the fifth-lowest cost of living in the United States, according to MERIC data gathered in the third quarter of 2021. While its western next-door neighbor, Alabama, is just slightly cheaper on average, holding the fourth-lowest spot on the list, Tennessee, South Carolina, North Carolina, and Florida all have higher average living costs.

But what does that look like in real-life terms? According to 2020 data from the Bureau of Economic Analysis, the average total personal consumption cost in Georgia is $38,165 per year, broken down like this:

Keeping a roof over your head in Georgia can be expensive, but it can also be pretty darn affordable. Boasting more than 4 million housing units, per 2019 U.S. Census Bureau data, Georgia’s average home value was $262,707 in late 2021. For comparison, the median sales price of an existing home, per the National Association of Realtors®, was $352,800.

Here’s what that looks like on a monthly basis, per 2019 data from the U.S. Census Bureau:

Of course, exact figures will depend on your specific location. Here are the typical home values for major Georgia cities, according to Zillow, in late 2021.

Keeping the home fires burning is an important part of anyone’s monthly budget. Here’s how utility costs break down in Georgia.

Average Grocery & Food Costs in Georgia: $290.17 per person, per month

You gotta eat — and stray peach trees won’t sustain you forever. But how much will you have to spend on food in Georgia?

As mentioned, the Bureau of Economic Analysis estimates Georgia’s average annual (non-restaurant) food cost per capita at $3,483. When we divide that by 12, we get about $290 per person, per month.

Of course, that figure will vary significantly depending on where, exactly, in Georgia you are. For example, a gallon of milk costs about $3.87 in Albany, whereas it costs only $1.38 in the Augusta area.

The Council for Community and Economic Research ranks the food costs in major American cities. Here are the rankings for Georgia cities’ grocery costs for the second quarter of 2021, from lowest to highest.

Whether it’s commuting to work or schlepping your Atlanta Brave-in-training to baseball practice, you’ve gotta get around. The specific transportation costs you’ll incur depend on how many adults and children are in your family and how many of the adults are earners, but here’s a basic breakdown, according to data from MIT’s Living Wage Calculator .

Average Health Care Costs in Georgia: $5,910 per person, per year

The average annual per-capita cost of health care in Georgia is $5,910, according to the 2020 Bureau of Economic Analysis Personal Consumption Expenditures by State report.

Obviously, specific costs will vary depending on how many people are in your family, what your health insurance coverage looks like, and how often you need medical attention.

The cost of child care is a large but necessary expense for most parents, though there is some wiggle room depending on what kind of care you’re seeking.

For example, classroom care is generally more affordable than home-based family child care, and you may be able to find local nanny shares and other options to help lower the overall cost. The Georgia Department of Early Care and Learning also offers parents a slate of resources for finding excellent care programs in your community.

Here are the average child care costs in Georgia, per 2021 data from costofchildcare.org :

Along with your federal income tax, Georgia — like most other states — also assesses a state income tax, which is offered in graduate brackets depending on your income level.

Per the Tax Foundation’s State Individual Income Tax Rates and Brackets for 2021 , the top marginal tax rate in Georgia is 5.75%. While it’s not the highest in the country (for comparison, South Carolina’s rate is 7%, and California’s is 13.3%), it’s not the lowest, either, and it’s worth taking into consideration if you’re deciding whether or not to establish residency in Georgia.

All right. We’ve covered all the boring stuff — staying housed, fed, and in the government’s good graces. What about the fun expenses?

As mentioned above, the Bureau of Economic Analysis estimates personal expenditures at $20,801 per person, per year. Here’s where some of that money might be going (costs are as of Nov. 1, 2021):

The good news is, plenty of Georgia’s best attractions are 100% free: you can enjoy a stellar sunrise on the beach at Tybee Island, dawdle in Savannah’s Bonaventure Cemetery, stand in awe of (and maybe some confusion at) the Georgia Guidestones, and wander along Atlanta’s hip urban walking and biking path, the Beltline, without paying a dime.

How Much Money Do You Need to Live Comfortably in Georgia?

Obviously, “comfortable” means something different to everyone — and the amount of money you’ll need to feel comfortable in Georgia (or anywhere, for that matter) will depend on how many people are in your family, what your lifestyle is like, and many other factors.

That said, Georgia ranks 13th on U.S. News and World Report’s Affordability Ranking , which specifically measures the average cost of living in a given state against the average amount of money most households have.

And MERIC puts the state in fifth place on its lowest-cost-of-living list, which is to say: It can be pretty darn cheap to live here, relatively speaking (and, again, depending on where you are and what your life is like).

What City Has the Lowest Cost of Living in Georgia?

To stack the odds in your favor for enjoying a comfortable, low-cost lifestyle in Georgia, we’ve gathered the three major cities with the lowest cost of living, according to the Council for Community and Economic Research’s Cost of Living Index for the second quarter of 2021.

With a cost of living index of 83.9, Statesboro is the city ranked lowest in the council’s most recent data. The largest city in and seat of Bulloch County, Statesboro is about an hour northwest of Savannah, giving it a small-town feel within easy reach of a slightly larger city.

Sitting close enough to the South Carolina border that it was lumped together with Aiken in the index, August enjoys the second-lowest cost of living in Georgia (index 84), and also boasts waterfront views of the Savannah River. With a population of over 197,000, according to the most recent census information, this town has a larger population than Savannah and is home to the Morris Museum of Art and the Augusta Museum of History.

Small and oozing with Southern charm, Dublin is in the heart of the state about an hour southeast of Macon. The council gave it a cost of living index of 85.4, making it the third-cheapest city in Georgia to live in — though we should perhaps say “town” instead, since its population is around 16,000.

Looking for a Home Loan?

If Georgia is on your mind, you may be able to find a peach of a home — especially since the cost of living is low, relatively speaking.

Although there are many home loans on the market to choose from, SoFi offers a range of fixed-rate mortgage loans at competitive interest rates and with as little as 5% down.

SoFi Mortgages
Terms, conditions, and state restrictions apply. Not all products are available in all states. See SoFi.com/eligibility for more information.

Third-Party Brand Mentions: No brands or products mentioned are affiliated with SoFi, nor do they endorse or sponsor this article. Third-party trademarks referenced herein are property of their respective owners.
External Websites: The information and analysis provided through hyperlinks to third-party websites, while believed to be accurate, cannot be guaranteed by SoFi. Links are provided for informational purposes and should not be viewed as an endorsement.
SOHL1021043