The ability to help people who really need it may be the main reason you’ve decided to become a nurse. But let’s face it—money is usually a factor in job choice. That comes into play in two distinct ways: in terms of the salary you’ll be able to earn as a nurse, and the loans you’ll have to repay.

First, the good part. The mean wage for registered nurses is $72,180 a year, and rises to over $100,000 for nurse midwives, nurse practitioners, and nurse anesthetists, who make a mean annual salary of about $164,000, according to the Bureau of Labor Statistics (BLS).

But nurses can also end up carrying tens of thousands of dollars in debt. Graduate nursing students have a median debt of $40,000-$54,999, according to a 2017 loan survey by the American Association of Colleges of Nursing (AACN). Just under a third have to swallow the bitter pill of owing $70,000 or more.

To get your ounce of prevention, come examine SoFi’s Return on Education (ROED) Nursing School Rankings, which analyzes more than 50,000 student loan refinancing applicants from January 2014 to April 2017. You’ll see which graduate nursing programs offer the best return on all the time and money you’ll be spending on your studies, according to SoFi data. Note that schools with the lowest average student loan debt and the highest average salary for nurses who have been out of grad school for three years are the ones that will give you the best payoff. 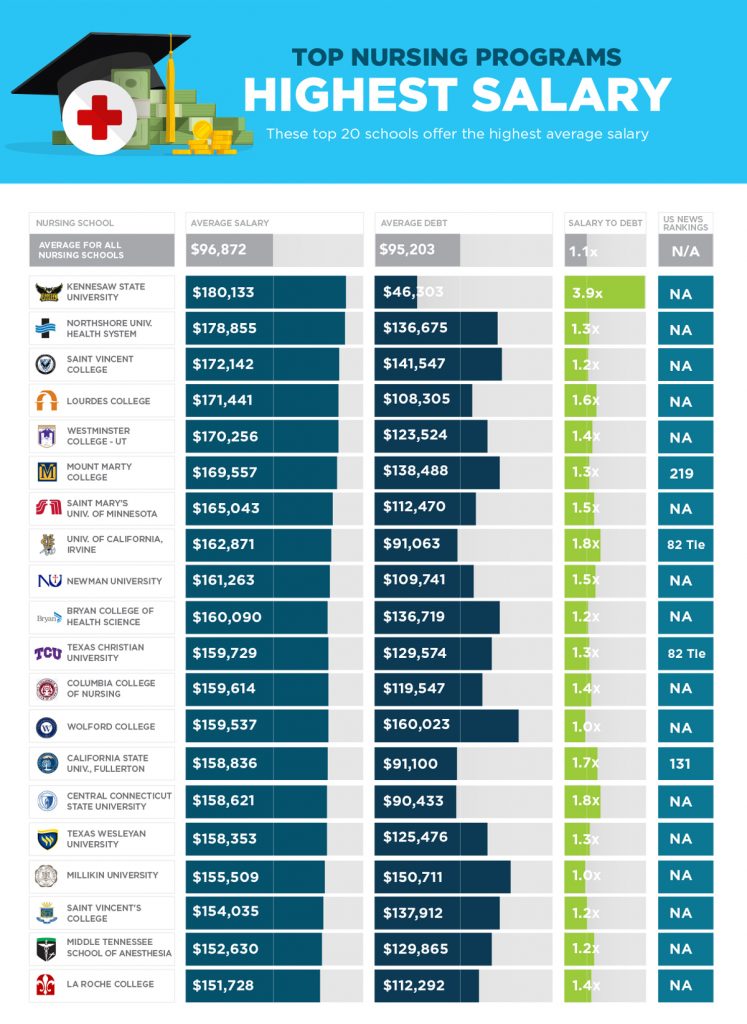 These alumni make the most money

Graduates of the WellStar School of Nursing at Kennesaw State University in northern Georgia make an average of $180,133 a year, higher than any other nursing program on SoFi’s list of the 20 graduate nursing schools whose alumni earn the most. It turns out that going to Kennesaw State is also the most lucrative choice, meaning that the high salary significantly outweighs the relatively low debt.

Among all U.S. regions, job offer rates for nurses are highest in the South, reaching 95% or over for nurses with either a bachelor’s degree or a master’s who were seeking a job four to six months after graduation, the AACN found.

Georgia in particular is projected to have a shortfall of 6,700 nurses by 2025, even as the supply of nurses nationally is projected to outpace demand by then, according to a 2014 U.S. Department of Health and Human Services report on the future of the nursing workforce.

St. Vincent College, which has the third highest salary on our list (an average of $172,142) and offers a master’s in health science in nurse anesthesia, is located in Pennsylvania, a state with one of the highest employment rates for nurses, according to the Bureau of Labor Statistics. On the other hand, St. Vincent’s average outstanding debt is also pretty high, at $141,547–-over 80% of graduates’ annual salary.

Other states with a high employment rate include Texas, the home of two schools on our highest salary list: Texas Christian University in Fort Worth, which U.S. News & World Report ranked among the 100 top graduate schools for nursing in 2017, and Texas Wesleyan University, also in Fort Worth.

California not only has the highest employment level, but is also the state with the highest mean wage for nurses in the country, at $101,750 a year, the BLS found. California schools on our highest salary list include the University of California, Irvine, and California State University, Fullerton. 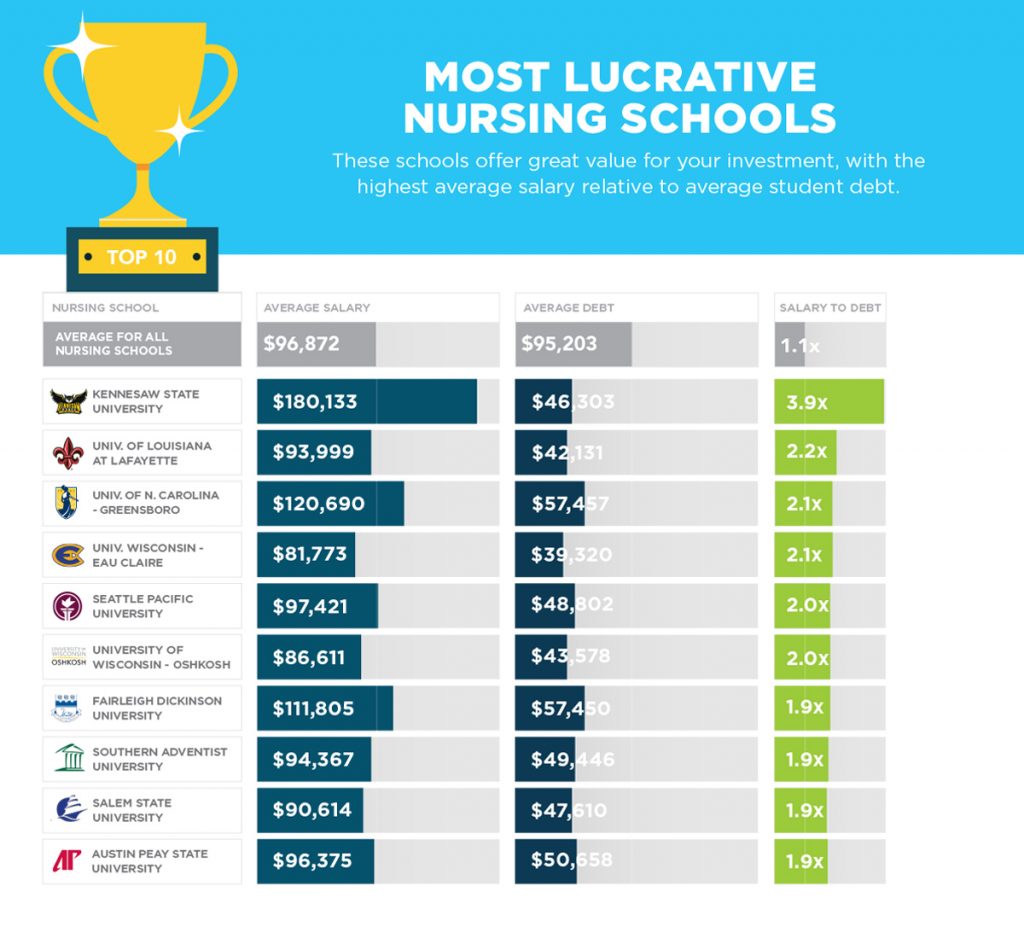 How to make more than you owe

The 10 nursing schools that made the most lucrative list all produced graduates who earned about twice as much per year—or more—as they owed in student loans.

Other schools to consider are those in states that the Bureau of Labor Statistics found to have high employment rates for nurses, like North Carolina. The University of North Carolina-Greensboro, among the top 60 nursing graduate schools on U.S. News & World Report’s 2017 ranking, is the third most lucrative nursing school on SoFi’s list. Its graduates earn an average salary of $120,690, 2.1 times the average debt for the school.

The Bureau of Labor Statistics also found that nurses get paid well in states like Washington and New Jersey. Seattle Pacific University in Seattle ranks sixth on our most lucrative list, with a salary of $97,421—twice the debt you’d owe if you went there. And government data shows that nurses in New Jersey have a high likelihood of getting a job and getting paid well for it, as graduates of the nursing school at Fairleigh Dickinson University in Teaneck, New Jersey, earn an average of $111,805 a year, about double the $57,450 they have to pay back in loans.

If you’re from Wisconsin or Tennessee, you might be interested in knowing that two nursing programs from your state made it onto SoFi’s list of the 10 most lucrative nursing schools. Graduates of the University of Wisconsin schools at Eau Claire (No. 4) and Oshkosh (No. 6) both earned over $80,000 on average, roughly twice the outstanding debt amount. 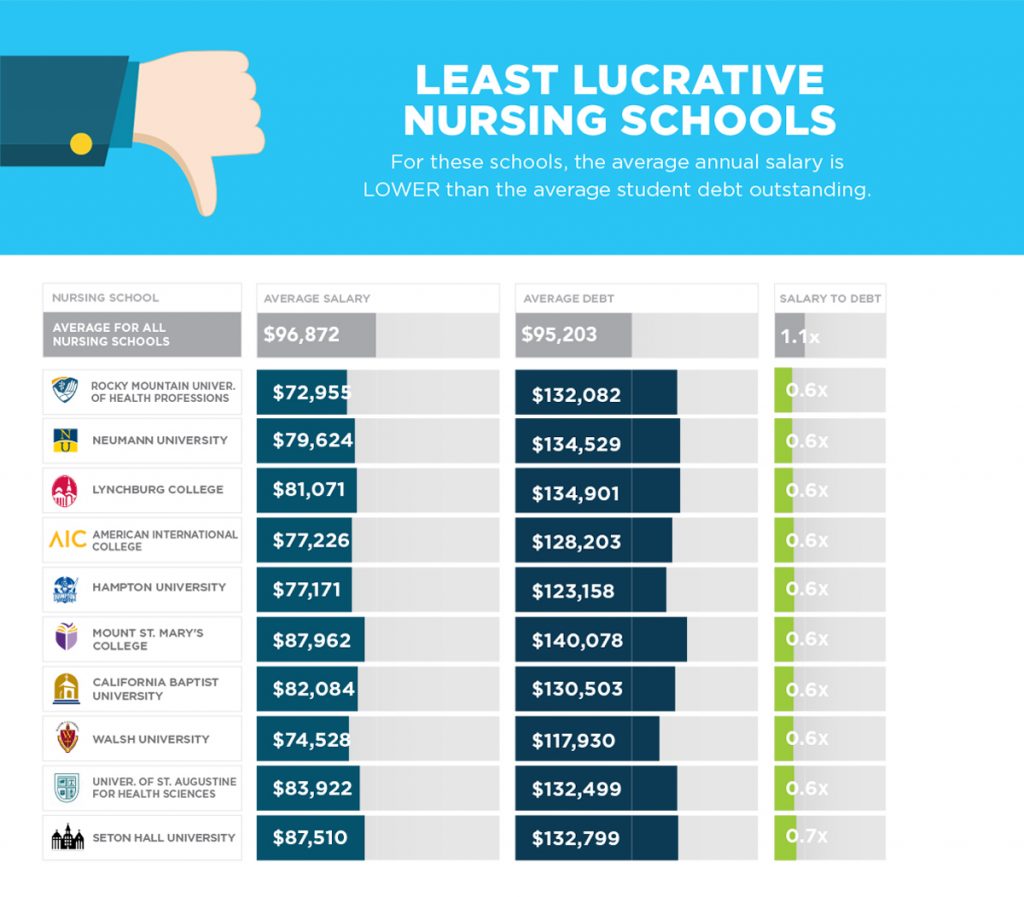 Don’t let your debt eat too much of your salary

If the student loans you expect to repay for a particular school add up to more than the annual salary you’re projected to earn, you might want to think twice about whether that school is the right fit for you. Nursing grads from all of our 10 least lucrative schools had more debt owed than salary paid.

Though the University of St. Augustine for Health Sciences has four campuses, its program for  a master’s of science in nursing is online, with an optional 2.5-day campus residency program. This university came in at number 9 on our least lucrative list, with an average salary of $83,922, but debt over 1.5 times as high, clocking in at $132,499.

Being a nurse means you’ll be doing quite a lot to help others. But don’t forget to help yourself too, by making a smart decision about which nursing school is most equipped to help you make a living without saddling you with a significant burden of student loan repayments.

For a dose of SoFi medicine, take a look at how you can refinance your student loans and get your loan repayment plan a clean bill of health.