Heads Up: The Fed continues to raise rates — up 3% this year — making credit card debt even costlier. Pay it off today with a low fixed-rate personal loan. View your rate —>

Historically speaking, mortgage rates have remained relatively low since the Great Recession, with some fluctuation at times due to market conditions. As a result, a generation of homebuyers has become accustomed to a low 30-year fixed-rate mortgage.

But with mortgage rates on the rise, it can put a sour taste in the mouths of people trying to join the ranks of homeowners in the country. They may be thinking that they missed an opportunity to buy a home. However, it’s important to look at the history of mortgages and mortgage rates to put the current conditions into context.

The History of Mortgage Rates

The modern history of mortgage lending in the U.S. began in the 1930s with the creation of the Federal Housing Administration. From the 1930s through the 1960s, a combination of government policy and demographic changes made owning a home a normal part of American life. During this time, the 30-year fixed-rate mortgage became the standard for home buying.

When discussing the fluctuation of mortgage rate trends, analysts usually refer to the average 30-year fixed-rate mortgage. Here’s a look at the trend of these mortgage rates since the 1970s. 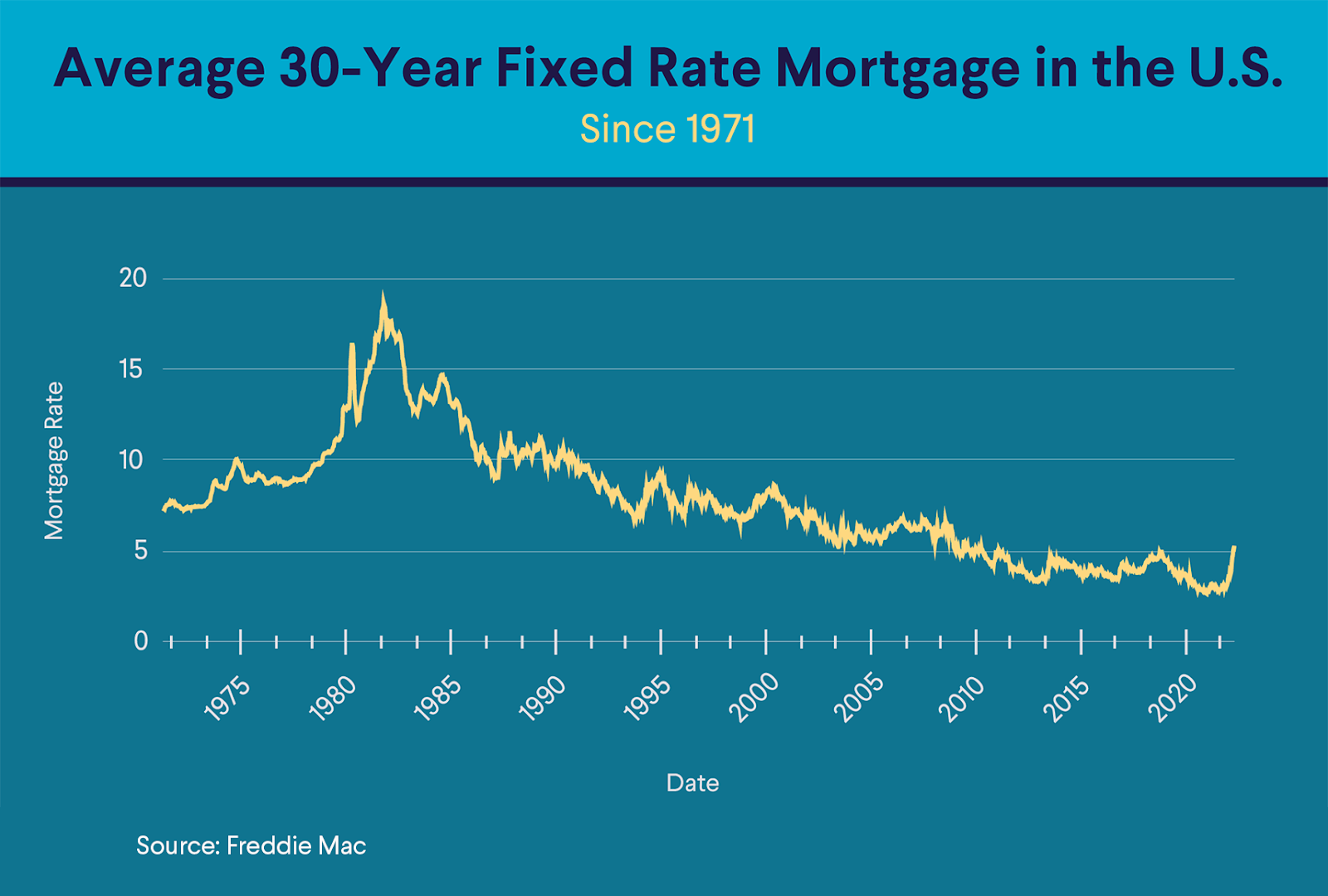 Throughout the 1970s, mortgage rates rose steadily, moving from the 7% range into the 13% range. This uptick in rates was due, in part, to the Arab oil embargo, which significantly reduced the oil supply and sent the U.S. into a recession with high inflation — known as stagflation.

The average 30-year fixed-rate mortgage hit an all-time high in October 1981 when the rates hit 18.63%. The Federal Reserve’s tight monetary policy affected this high borrowing cost and put the economy into a recession. However, inflation was under control by the end of the 1980s, and the economy recovered; mortgage rates moved down to around 10%.

Several factors led to a housing crash in the latter part of the 2000s, including a rise in subprime mortgages and risky mortgage-backed securities.

The housing crash led to the Great Recession. To boost the economy, the Federal Reserve cut interest rates to make borrowing money cheaper. Mortgage rates dropped from just below 7% in 2007 to below 5% in 2009.

Mortgage rates steadily decreased throughout most of the 2010s, staying below 5% for the most part. The Federal Reserve enacted a zero-interest-rate policy and a quantitative easing program to prop up the economy during this time following the Great Recession. This helped keep mortgage rates historically low.

The Federal Reserve reduced the federal funds rate to near-zero levels in March 2020, causing a drop in rates of various financial products. The effects of the fallout from the Covid-19 pandemic pushed mortgage rates below previous historic lows. The average 30-year fixed-rate mortgage hit 2.77% in August 2021.

However, with inflation reaching levels not experienced since the early 1980s, the Federal Reserve reversed course. The central bank started to tighten monetary policy in late 2021 and early 2022, which led to a rapid increase in mortgage rates. In May 2022, the average mortgage rate was above 5%. While this is below historical trends, it’s the highest rate since 2018.

Why Do Mortgage Rates Change?

As we can see from looking at interest rate fluctuations, major economic events can significantly impact mortgage rates both in the short and long term. As noted above, this has to do primarily with the Federal Reserve.

Federal Reserve actions influence nearly all interest rates, including mortgages through the prime rate, long-term treasury yields, and mortgage-backed securities. The Federal Reserve sets the federal funds benchmark rate, the overnight rate at which banks lend money to each other.

If you have a mortgage with a variable interest rate, known as an adjustable-rate mortgage, changing rates can affect your loan payments. With this type of home loan, you may have started with an interest rate lower than many fixed-rate mortgages. That introductory rate is often locked in for an initial period of several months or years.

After that, your interest rate is subject to change — how high and how often depends on the terms of your loan and interest rate fluctuations. These changes are generally tied to the movement of interest rates, but more specifically, which index your adjustable-rate mortgage is linked to, which can be affected by the Fed’s actions.

However, most adjustable-rate mortgages have annual and lifetime rate caps limiting how high your interest rate and payments can change.

If you took out a fixed-rate mortgage, your initial interest rate is locked in for the entire time you have the home loan, even if it takes you 30 years to pay it off.

Recommended: What Is a Good Mortgage Rate?

If you are in the market to buy a home, it might be tempting to rush and buy while rates are low and on the rise. Or, you may put off buying a home until rates decrease in the future. However, you never want to time the market. As mentioned above, mortgage rates are near historic lows and are constantly fluctuating, so choosing the perfect time to buy a home based on the ideal rate can be difficult.

Additionally, there are many factors to consider when buying a home beyond the mortgage rate. It’s important to understand all aspects of your finances, personal situations, and housing market trends before buying a home.

If you think you’re ready to buy a home, SoFi can help. With SoFi Mortgage Loans, you can find a competitive rate even in a rising rate environment. Turn your dream home into a reality with flexible terms, competitive mortgage rates, and down payments as little as 3% for qualified first-time homebuyers.

If you’re interested in taking out a mortgage, check out SoFi Mortgage Loans today.

SoFi Mortgages
Terms, conditions, and state restrictions apply. Not all products are available in all states. See SoFi.com/eligibility for more information.
SoFi Loan Products
SoFi loans are originated by SoFi Bank, N.A., NMLS #696891 (Member FDIC). For additional product-specific legal and licensing information, see SoFi.com/legal. Equal Housing Lender.
Financial Tips & Strategies: The tips provided on this website are of a general nature and do not take into account your specific objectives, financial situation, and needs. You should always consider their appropriateness given your own circumstances.
MG18115

See what SoFi can do for you and your finances.

Select a product below and get your rate in just minutes.

✝ To check the rates and terms you qualify for, SoFi conducts a soft credit pull that will not affect your credit score. However, if you choose a product and continue your application, we will request your full credit report from one or more consumer reporting agencies, which is considered a hard credit pull and may affect your credit.

* SoFi Lending $10 Check Your Rate on a Personal Loan or Student Loan Refinance Promotion (“Promotion”): The Promotion is offered by SoFi Lending Corp. or an affiliate (dba SoFi). SoFi reserves the right to change or terminate this Promotion at any time with or without notice to you. No purchase necessary to participate. Additional terms and conditions may apply. Promotion is void where prohibited by state law.