Cost of Living in Washington D.C. 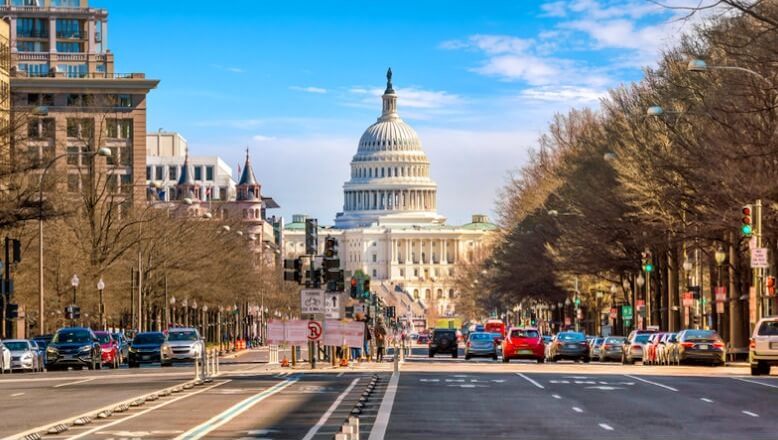 Ah, the nation’s capital. Known for its unparalleled cultural attractions — many of which are free — along with its professional-yet-swank mid-Atlantic attitude, D.C. is a popular place to live. In fact, according to 2019 U.S. Census data, 705,749 people live there, which is a pretty big number for a relatively minute 68.34-square-mile area.

But if you’re considering moving to the District, you should be aware: It’s definitely not a cheap place to live, free museums or no.

Here’s the data about the cost of living in Washington, D.C., so you can make an informed decision about whether or not it’s right for you.

What’s the Average Cost of Living in Washington, D.C.?

It’s not surprising that Washington is such an attractive place to live. It almost goes without saying.

Unfortunately, though, according to data from the Missouri Economic and Research Center (MERIC ), Washington, D.C., is low on the affordability scale. It ranks 50th on the list with a cost of living index score of 154.4, beat out only by Hawaii.

The Bureau of Economic Analysis estimated the average annual personal consumption expenditure in the District of Columbia at $65,169 in 2020. Here’s how that breaks down:

Housing is often the highest single cost in people’s monthly budgets, and you definitely want to prepare for that expense if you’re going to live in Washington, D.C. Per 2021 data from Zillow, the typical home price in the D.C. metro area is a whopping $698,219, which is almost double the median single-family existing-home sale price of $352,800 in September 2021, the National Association of Realtors® reported.

Even for renters, the costs are pretty intense. Here’s how the cost of housing breaks down on a monthly basis, according to U.S. Census data from 2019:

Even though the cost of housing is sky-high in Washington, D.C., there is good news: Once you get that roof over your head, keeping yourself in electricity, water, gas, and cable is fairly affordable.

Here’s how the average monthly utility bill breaks down.

If the average yearly estimated non-restaurant food and beverage expenditure in the District of Columbia is $5,696 per person, divide that by 12 to end up at $475 per person, per month.

By that metric, you might expect to spend about $1,900 per month to feed a family of four, but keep in mind that this estimate doesn’t factor in the fact that most children tend to eat less than adults.

That’s a fairly costly food bill. According to the Council for Community and Economic Research ’s second-quarter 2021 Cost of Living Index, the Washington, D.C., area scores 113.8 on grocery items. For comparison, Baltimore sits at 110.1, as does nearby Bethesda, Maryland.

Recommended: How Much Should I Spend on Groceries a Month?

Once you’ve got your home all set up, you still have to get around — work, school, and other activities beckon. Although Washington, D.C., does have public transit options, fares can run up to $6 per ride during peak times, and many Washingtonians opt to keep (and pay to park) a personal vehicle.

You might expect to spend approximately the following amounts on transportation around Washington, D.C., according to MIT’s Living Wage Calculator .

Average annual health care costs in Washington, D.C., are fairly high at about $10,295, according to the 2020 Bureau of Economic Analysis data.

Of course, specific health care costs vary significantly depending on all sorts of things: your health insurance coverage, how often you need to seek medical attention, your family makeup, and more.

Besides, if you’re living in D.C., there’s a pretty good chance you’re working for the government, so hopefully you have good health care benefits.

Raising kids might be some of the most fulfilling work we can do — but it’s also pretty expensive, especially in an already costly metro area like Washington, D.C.

While your exact child care costs will depend on how many children you have, what kind of care you’re after, and more, costofchildcare.org offers per-month, per-child care cost averages. (If you visit the website, you can even play with the toggles to see what certain extras, like bigger classrooms or better pay for caretakers, might add.)

Washington, D.C., like most U.S. states, levies a District-specific income tax in addition to the federal income taxes American earners pay. Like many states, D.C.’s income tax is charged at a graduated rate: The more you earn, the more you owe.

Per the Tax Foundation’s State Individual Income Tax Rates and Brackets for 2021 , the highest marginal tax rate in Washington, D.C., is 8.95%, which is pretty darn high, nationally speaking — neighboring Maryland and Virginia both cap out at 5.75%. Still, it’s a far cry from California’s sky-high 13.30% or Hawaii’s 11%.

We’ve covered all the basic necessities, but still, the Bureau of Economic Analysis estimates that the average District denizen spends about $37,021 on “other personal expenditures.”

While D.C. is well known for its plethora of free must-sees — the majority of the Smithsonian Institution properties, including the National Zoo, and self-guided tours of many major government buildings, such as the Library of Congress and the U.S. Capitol, are all free of charge. Here are some ways that money might be getting spent in the city (costs accurate as of Nov. 4, 2021).

•  Tickets to a performance at the historic Ford’s Theatre, where Abraham Lincoln was shot: $36 to $93 or more, depending on the program and where tickets are acquired.

•  One year of undergraduate tuition at Georgetown University: $59,784

Lots of residents probably also spend a decent amount of money on the clothes, accessories, and gadgets expected of hip mid-Atlantic citizens, but again, if you’re looking for free entertainment and educational activities, the District of Columbia is pretty hard to beat.

How Much Money Do You Need to Live Comfortably in Washington, D.C.?

While everyone’s definition of “comfort” is a little different, one thing’s for certain: Of the places to live in the United States, Washington, D.C., is certainly one of the most expensive. As mentioned above, MERIC ranks it 50th, less expensive only than Hawaii.

Plus, 2020 data from the Bureau of Economic Analysis suggests that most people spend about $65,169 to live, work, and play here — so you’ll probably want to make more than that, after taxes.

If the nation’s colorful capital is calling you, despite the Washington, D.C., cost of living, you might find yourself hunting for a new home.

Although there are many home loans on the market to choose from, SoFi offers a range of fixed-rate mortgage loans at competitive interest rates and with as little as 5% down.

Photo credit: iStock/f11photo
SoFi Loan Products
SoFi loans are originated by SoFi Bank, N.A., NMLS #696891 (Member FDIC). For additional product-specific legal and licensing information, see SoFi.com/legal. Equal Housing Lender.
SoFi Mortgages
Terms, conditions, and state restrictions apply. Not all products are available in all states. See SoFi.com/eligibility for more information.
Third-Party Brand Mentions: No brands or products mentioned are affiliated with SoFi, nor do they endorse or sponsor this article. Third-party trademarks referenced herein are property of their respective owners.
External Websites: The information and analysis provided through hyperlinks to third-party websites, while believed to be accurate, cannot be guaranteed by SoFi. Links are provided for informational purposes and should not be viewed as an endorsement.
SOHL1021043