Cost of Living in North Carolina 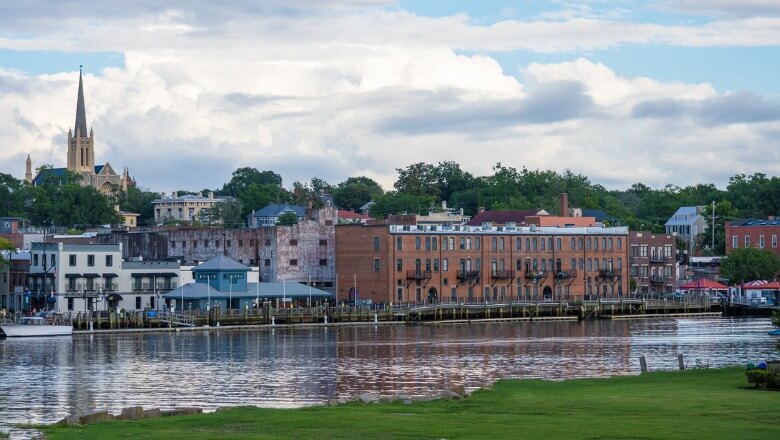 Families looking to make a move to a new state will likely appreciate that North Carolina has not one but two of the best cities for families.

That’s right: You don’t need to give up city life to raise a family. U.S. News found that Raleigh and Durham are some of the best places for families to live in the entire country.

It happens to be a pretty affordable state, too. Keep reading to learn more about the North Carolina cost of living.

What’s the Average Cost of Living in North Carolina?

Average Cost of Living in North Carolina: $38,295 per year

North Carolina residents will find that they aren’t spending drastically more or less than they would in other states. According to MERIC data gathered in the second quarter of 2021, North Carolina has the 24th-lowest cost of living in the United States.

What would it cost you to live a bit farther south? Residents of South Carolina can expect to spend less, as the state came in three spots ahead of North Carolina when looking at the least expensive states to live in.

It can be hard to visualize what these rankings mean, so let’s take a closer look at 2020 data from the Bureau of Economic Analysis . The total personal consumption cost in North Carolina is $38,295 per year. Here’s how that breaks down.

All told, North Carolinians may need about $3,191 per person, per month.

There are plenty of housing units available in North Carolina (4 million, 2019 census data shows), which may explain why housing is fairly affordable in the Tar Heel State. Zillow gave a typical North Carolina home value of $273,098 in late 2021.

Here’s what you can expect housing in North Carolina to cost on a monthly basis, according to the latest census data.

Because the location of your home greatly influences its price, let’s look at the typical home values in 20 major North Carolina cities, according to Zillow, in September 2021.

No matter where you live, you’ll need to cover the costs of basic utilities.

While your dietary preferences can play a big role in how much you spend on food per month, so can where you live. North Carolina’s average annual food cost per person is estimated to be $3,470, according to the Bureau of Economic Analysis.

The area of North Carolina you live in can also play a role in your grocery costs. The Council for Community and Economic Research, outlined the grocery costs in major North Carolina cities for the second quarter of 2021. Here are those costs from lowest to highest.

Whether you’re commuting to bustling downtown Raleigh or spending a weekend relaxing in the Outer Banks, getting around North Carolina costs money.

How much money you expect to spend can vary based on what your household looks like. Here are a few examples of average transportation costs for different family structures from MIT’s Living Wage Calculator .

The 2020 Bureau of Economic Analysis Personal Consumption Expenditures by State report found that the average per-capita cost of health care in North Carolina is $6,250 per year.

Location, the type of coverage you have, and how often you need care will influence your bottom-line expense.

The cost of child care is a large but necessary expense for most parents, though there is some wiggle room depending on what kind of care you’re seeking.

If you’re struggling to afford child care costs, it’s worth looking into the Child Care Subsidy program for eligible families in North Carolina.

According to 2021 data from costofchildcare.org , these are the average child care costs in North Carolina.

In North Carolina, estimating what you’ll owe in state income tax is pretty simple, since this state has a single rate tax of 5.25% instead of a graduated rate.

As seen on the Tax Foundation’s State Individual Income Tax Rates and Brackets for 2021 , North Carolina’s rate of 5.25% isn’t super high or low compared with other states’ rates. In California, the top marginal tax rate is 13.3%, but some states like Florida don’t charge state income tax at all.

Once you pay all of your bills, it’s understandable if you want to treat yourself to a little fun. If each North Carolinian spends about $20,732 a year on personal expenditures, some of these cheap thrills could factor in (costs accurate as of Nov. 3, 2021):

•  Breakfast at the beloved Biscuit Head restaurant: $10 for the “Full Breakfast”

Museum lovers will appreciate that the North Carolina Museum of Natural Sciences has free general admission.

How Much Money Do You Need to Live Comfortably in North Carolina?

While we all have varying definitions of what it means to live comfortably, U.S. News & World Report’s Affordability Rankings can give you a pretty good idea of how achievable that concept is in each state. North Carolina came in 24th in terms of basic affordability.

According to MERIC, North Carolina also takes the 24th spot, sandwiched by Mississippi on the low end and Hawaii on the high end, when it comes to cost of living. So it looks like the state is smack-dab in the middle, which could mean comfortable to many.

What City Has the Lowest Cost of Living in North Carolina?

All states have their more expensive and more affordable spots to live in. If you have your eye on North Carolina, these are three of the major cities and metro areas with the lowest cost of living, according to the Council for Community and Economic Research’s Cost of Living Index for the second quarter of 2021.

The Thomasville-Lexington area has a cost-of-living index of 86.4, which makes it the North Carolina area ranked lowest in the council’s most recent data. If you’re ready for small-town life, you’ll find that Thomasville and Lexington both hit the spot. Thomasville has a population of 26,649, and Lexington only has 18,933 residents, the latest census data shows.

Salisbury (cost-of-living index of 91.7) is a part of historic Rowan County, which is home to 11 National Register districts, five local historic districts, and many museums. If you want to get a feel for the town’s history, you can’t miss the Salisbury Heritage Walking Tour and the Salisbury History & Art Tour.

The third-most-affordable major North Carolina city to make the list is Raleigh, with a cost-of-living index of 93.5. As of 2019, this major city had over 474,000 residents. Raleigh has 10 traditional universities and colleges and an international airport. If you want a big-city lifestyle on a monthly budget, Raleigh may be the right fit for you.

The North Carolina cost of living falls in the middle of U.S. rankings. With millions of acres of forest as well as modern amenities and educational, medical, and research innovation, the Tar Heel State could prove enticing.

Photo credit: iStock/Darwin Brandis
SoFi Loan Products
SoFi loans are originated by SoFi Bank, N.A., NMLS #696891 (Member FDIC). For additional product-specific legal and licensing information, see SoFi.com/legal. Equal Housing Lender.
SoFi Mortgages
Terms, conditions, and state restrictions apply. Not all products are available in all states. See SoFi.com/eligibility for more information.
Third-Party Brand Mentions: No brands or products mentioned are affiliated with SoFi, nor do they endorse or sponsor this article. Third-party trademarks referenced herein are property of their respective owners.
External Websites: The information and analysis provided through hyperlinks to third-party websites, while believed to be accurate, cannot be guaranteed by SoFi. Links are provided for informational purposes and should not be viewed as an endorsement.
SOHL1021041