Cost of Living in New Hampshire 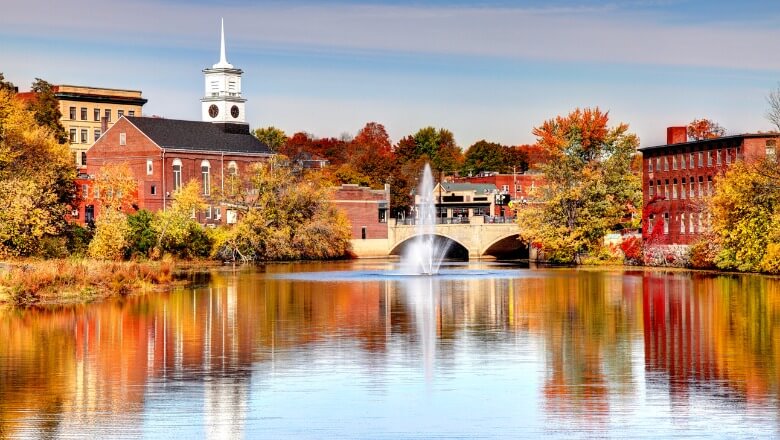 New Hampshire has been one of the most popular states to move to in recent years, according to research conducted by U.S. News & World Report. It’s easy to see why.

New Hampshire offers residents close proximity to stunning nature, rich history, and culture. All of the perks of residing in New Hampshire may be why it’s one of the most expensive states to live in.

To better understand the New Hampshire cost of living and how your budget would be affected by a move to the Granite State, keep reading.

What’s the Average Cost of Living in New Hampshire?

Average Cost of Living in New Hampshire: $51,760 per year

If you’re considering relocating to this New England state, the cost of living could affect your monthly budget.

According to MERIC data gathered in the third quarter of 2021, New Hampshire has the 38th lowest cost of living in the country. If New Hampshire exceeds your budget, don’t bank on finding an affordable nearby state to move to. All of the states around New Hampshire — Maine, Massachusetts, Connecticut, Rhode Island, and New York — are some of the most expensive in the country to live in.

What would it cost you to live a bit farther south? Residents of South Carolina can expect to spend less, as the state came in three spots ahead of North Carolina when looking at the least expensive states to live in.

So, what is the cost of living in New Hampshire? According to 2020 data from the Bureau of Economic
Analysis , the average total personal consumption cost in New Hampshire comes to $51,760 per year. Here’s where that spending is going, specifically.

That works out to $4,313 in average monthly expenses for each Granite Stater.

Here’s what you can expect to spend monthly on housing in New Hampshire, per 2019 census data:

How much the average home costs depends on where it is, of course. Let’s take a look at the typical home values for major New Hampshire cities, according to Zillow, in late 2021.

What should you expect to spend on utilities monthly in New Hampshire? Here’s a breakdown of the average utility spending across major categories.

So you can budget accordingly, let’s take a closer look at how much you’d likely spend on food on average in New Hampshire. The Bureau of Economic Analysis puts the average annual (non-restaurant) food cost per person at $4,383, or about $365 a month.

The Council for Community and Economic Research ranks the food costs in major American cities. The only major New Hampshire city the council examined was Manchester. This is Manchester’s grocery costs ranking for the second quarter of 2021.

Parents know that child care is a major expense.

Those who meet certain income requirements and are working, searching for work, or participating in a training program might catch a break with child care scholarships .

This is what many parents can expect to spend on child care costs in New Hampshire, per 2021 data from costofchildcare.org .

Tax Rate in New Hampshire: 5% on interest and dividends

New Hampshire taxes interest and dividend income and is the only state to do so, says the Tax Foundation . The rate is 5% but will be phased out by 2027.

If you’re looking to save on taxes before then, you might consider moving to a state with no income tax: Alaska, Florida, Nevada, Washington, South Dakota, Tennessee, Texas, or Wyoming.

If personal expenditures in New Hampshire average $28,498 per person each year, some of that could be spent on fun. Here are a few ideas (costs are accurate as of Nov. 24, 2021):

•  Learn more about architecture and the work of Frank Lloyd Wright at the Currier Museum of Art in Manchester: $15 (kids), $20 (students), or $35 (adults) for regular admission.

•  Get the kids’ imagination flowing in the city of Glen at Story Land, where fairytales come to life: Season passes start at $49.99.

•  Enjoy some time in nature at Franconia Notch State Park in Lincoln: $2 (kids) to $4 (adults) per day.

How Much Money Do You Need to Live Comfortably in New Hampshire?

Your family size, lifestyle, and other unique factors will influence how accessible a comfortable style of living is in New Hampshire, but let’s just say that comfort will come at a price.

New Hampshire ranks 38th on U.S. News & World Report’s Affordability Rankings , which measure the average cost of living in a given state against the average amount of money that state’s households have.

MERIC’s ranking agrees: It, too, found that New Hampshire has the 38th lowest cost of living in the country among the 50 states and Washington, D.C.

What City Has the Lowest Cost of Living in New Hampshire?

The Council for Community and Economic Research singled out Manchester as the major New Hampshire city with the lowest cost of living.

Even though Manchester is relatively small, with 112,673 residents as of the last census check, it’s home to more than 8,000 businesses. The homes here aren’t cheap (see above).

New Hampshire is a beautiful state with a lot to offer. If you’re ready to face the New Hampshire cost of living and put down roots, it might be time to shop for a home and a mortgage.

Although there are many home loans on the market to choose from, SoFi offers a range of home loans at competitive interest rates and with as little as 5% down.

Photo credit: iStock/DenisTangneyJr
SoFi Loan Products
SoFi loans are originated by SoFi Lending Corp. or an affiliate (dba SoFi), a lender licensed by the Department of Financial Protection and Innovation under the California Financing Law, license # 6054612; NMLS # 1121636 . For additional product-specific legal and licensing information, see SoFi.com/legal.
SoFi Home Loans
Terms, conditions, and state restrictions apply. SoFi Home Loans are not available in all states. See SoFi.com/eligibility-criteria for more information.
Third Party Brand Mentions: No brands or products mentioned are affiliated with SoFi, nor do they endorse or sponsor this article. Third party trademarks referenced herein are property of their respective owners.
External Websites: The information and analysis provided through hyperlinks to third party websites, while believed to be accurate, cannot be guaranteed by SoFi. Links are provided for informational purposes and should not be viewed as an endorsement.
SOHL1021039