Cost of Living in Indiana 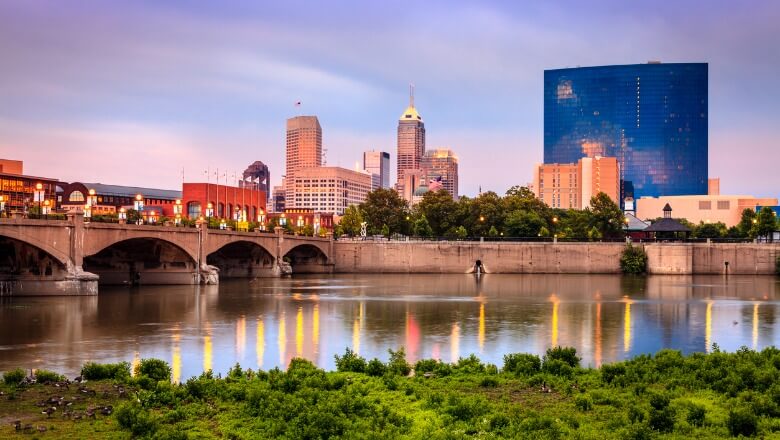 A venerable sports Mecca of the United States, Colts, Pacers, and Nascar fans all call Indiana their home — with each fanbase as rabid as the next when it comes to their respective franchise.

Regardless of their sports heritage, all native Hoosiers agree that Indiana’s gorgeous sunsets are a sight to behold when viewed against the backdrop of its 5.2 million acres of golden rolling cornfields.

With a population of over 6.7 million smiling friendly faces, Indiana meshes southern charm with affordable living costs. We cover some of the key statistics that make up the cost of living in Indiana.

What’s the Average Cost of Living in Indiana?

According to the Bureau of Economic Analysis , the average cost of living in Indiana will run you around $38,097 per year.

When compared to the rest of the nation, Indiana has the 11th lowest cost of living, according to MERIC’s third quarter of 2021 Cost of Living Index.

There are over 2.9 million housing units in the state of Indiana, approximately 69.1% of which are owner-occupied, compared to the U.S. average of 64%. We’ve provided the median mortgage and rental costs for Indiana below, sourced from the U.S. American Community Survey (ACS).

Your typical housing costs will vary by location. To help you get an idea of what a home costs in each major Indiana city, we’ve included their typical home values below, according to Zillow’s 2021 housing data:

Utility costs can take up a big chunk of your monthly budget, and the typical Hoosier can expect to pay around $367.51 in monthly utility costs. Here’s the data on some of the key utilities that make up your monthly cost of living in Indiana.

Average Grocery & Food Costs in Indiana: $273.58 per person, per month

The BEA cites that the average citizen of Indiana spends around $3,283 per year on food and groceries (non-restaurant). This comes out to a monthly grocery budget of around $273.58 per month (That’s a lot of fried twinkies at the county fair!).

When stacked up against the rest of the nation, a good meal in Indiana doesn’t cost much. According to MERIC’s data, Indiana ranks among the 5 most affordable states for food, trailing Arkansas slightly.

Even within the Great Lakes region, Indiana ranked 3rd out of 5 states, right in the middle of its area, which is still a fairly respectable performance for a region that does well on grocery costs as a whole.

Below are the Council for Community and Economic Research’s, rankings of food costs across major Indiana cities for the 3rd quarter of 2021.

The home state of the Indy 500 takes transportation seriously, even though the average Indiana driver probably spends more time stuck behind a tractor or a train crossing than they do watching races. A guy can still dream, right?

What Indiana does have going for it are its low auto insurance rates. According to a study from U.S. News & World Reports , Indiana has the 9th cheapest car insurance rates in the country.

Average Health Care Costs in Indiana: $7,508 per person, per year

The BEA’s latest personal consumption expenditures report shows that Indianers spend an average of $7,508 per year on healthcare-related expenses. The actual amount paid will vary according to your age, habits, and health history.

If you’re looking for affordable healthcare in Indiana, you can shop for and compare health insurance providers in Indiana on the healthcare.gov federal insurance marketplace.

Childcare costs in Indiana will vary based on your location, child’s age, and what type of care you seek.

If you’re struggling to find affordable childcare in Indiana, the Indiana Family and Social Services Administration can help you apply for assistance through the Federal Child Care and Development Fund .

Indiana is one of ten states with a flat rate tax structure. That means that all residents of Indiana are taxed at a flat 3.23% state income tax rate, regardless of how much they make. This differs from the majority of the nation, which relies on a graduated-income tax structure.

However, where these savings are offset are Indiana’s sales and use taxes. Indiana actually ties Mississippi, Rhode Island, and Tennessee for having the 2nd highest-sales tax in the nation, at a whopping 7%. Only California had a higher sales tax rate of 7.25%, according to the Tax Foundation’s State Individual Income Tax Rates and Brackets for 2021 .

Now that we’ve covered the mundane everyday costs, let’s take a look at the costs of some of Indiana’s best-known attractions.

The home state of sports legends like Larry Bird and Peyton Manning wears the colors of its sports teams with pride. Depending on how much you want to live it up, tickets for the best seats at these games can cost thousands of dollars.

If Nascar and Formula 1 are more your scene, seats at the Indy 500 can go for a lot cheaper, especially since the stadium is just one huge outdoor arena. Regardless of your sport of choice, Indiana is certainly a tailgater’s paradise.

Indiana drivers are also fond of quick snacks while driving through its miles of unending cornfields. It’s no coincidence then that popcorn was officially made the official state snack as of July 1st of this year! Indiana harvests over 94,000 acres of corn for popcorn production each year.

Finally, where would you be if you didn’t stop at one of Indiana’s signature roadside diners for a quick plate of chicken-fried steak and traditional sugar cream pie? Both of these delicacies are staples of the Hoosier diet.

How Much Money Do You Need to Live Comfortably in Indiana?

The average single adult in Indiana needs to earn at least $13.44 per hour, or $27,955 per year, to qualify for a “living wage,” according to MIT’s Living Wage calculator.

CHowever, how much it costs to “live comfortably” will depend on your own tastes and lifestyle. As far as states go, Indiana isn’t a bad candidate to settle down in. U.S. News & World Report’s Affordability Rankings ranked it the 6th most affordable state in the nation.

MERIC data actually ranked Indiana 11th in the nation in terms of costs of living, largely due to Indiana’s affordable housing and grocery costs. These are two of the largest expenditures for most households.

What City Has the Lowest Cost of Living in Indiana?

Below, we’ve listed the 3 cities in Indiana with the lowest cost of living, according to the Council for Economic and Community Research’s (CCER) 2nd Quarter Cost of Living Index.

Originally settled and founded by Quakers in 1806, Richmond is the quintessential “All-American City.” CCER’s latest Cost of Living Index ranked it as the most affordable city in Indiana. Its home prices and healthcare costs are among the lowest in the state.

A small city of just over 58,000 residents, Kokomo is located a little over an hour’s drive north of Indianapolis. It was ranked the second most affordable city in Indiana due to its low cost of housing and transportation.

Originally built by the U.S. Army in 1794, Fort Wayne remains a hub for manufacturing today, with the nearby General Motors and BF Goodrich plants employing thousands of residents. Fort Wayne, Indiana’s second-biggest city, also ranked as its third-most affordable; it has the lowest housing and grocery costs in the state.

Whether you’re thinking about calling Indiana home to enjoy the sports teams or the picturesque cornfields, it’s helpful to know that the cost of living probably won’t be a major deterrent. The relatively low cost of food and affordability of housing makes Indiana a place where you can probably get more bang for your buck, compared to many other states.

Photo credit: iStock/alexeys
SoFi Loan Products
SoFi loans are originated by SoFi Bank, N.A., NMLS #696891 (Member FDIC). For additional product-specific legal and licensing information, see SoFi.com/legal. Equal Housing Lender.
SoFi Mortgages
Terms, conditions, and state restrictions apply. Not all products are available in all states. See SoFi.com/eligibility for more information.
Third-Party Brand Mentions: No brands or products mentioned are affiliated with SoFi, nor do they endorse or sponsor this article. Third-party trademarks referenced herein are property of their respective owners.
External Websites: The information and analysis provided through hyperlinks to third-party websites, while believed to be accurate, cannot be guaranteed by SoFi. Links are provided for informational purposes and should not be viewed as an endorsement.
SOHL1021052